The result of a long-running procedure to find a concessionaire for Sofia Airport in Bulgaria has concluded, with the award being made to a consortium. Following a 90-day tender evaluation, Bulgaria's Ministry of Transport (MoT) has selected a consortium comprising Munich Airport GmbH and the asset manager Meridiam to operate and manage Sofia Airport for 35 years under the consortium name 'Sof Connect'.

This outcome was pretty well unexpected because those two had not figured highly in the odds and had not made the highest financial offer.

However, perhaps it was a dose of pragmatism that won the consortium this deal as they identified crucial infrastructure and operational failings and offered to do something about them forthwith, rather than engaging in airy-fairy musings on grand schemes in the distant future.

The second attempt to find a concessionaire is ultimately successful

Bulgaria's Ministry of Transport (MoT) has selected a consortium comprising Munich Airport GmbH and the asset manager Meridiam, whose fund is registered in Luxembourg, to operate and manage Sofia Airport for 35 years under the consortium name 'Sof Connect', following a 90-day tender evaluation. Meridiam is the financier and Munich the operator.

A third party is Strabag, the Austrian construction firm, which would take on the terminal (re)construction works (see below). There is an element of controversy here. Strabag built Sofia Airport’s Terminal 2, the start date of operations was delayed, and it resulted in litigation with the Bulgarian state.

The procedure was delayed on several occasions: called in Jul-2018, it has achieved this result finally from Bulgaria’s second attempt to pick a concessionaire for the country’s largest aviation hub. The first process, launched in 2016 by the previous government of Prime Minister Boyko Borissov, also underwent several delays before it was scrapped by a caretaker government in March 2017.

Even now, opposition socialists are arguing that it is against the state’s interests to offer the airport by way of a concession. The socialists have made several calls in parliament for the Cabinet to cancel the tender.

The consortium's bid included whichever is higher of a EUR24.5 million per annum concession fee or 32% of revenue, as well as a planned investment of EUR608 million over the term of the concession. Minister for Transportation Rosen Zheliazkov said a contract is expected to be signed shortly.

The resolution to offer Sofia Airport for concession goes back as far as 2011 and was investigated in this CAPA report at the time (subscribers only):

The decision is a surprise one in some ways, for various reasons.

In May-2019 the MoT announced that a Groupe ADP/TAV Airports consortium had offered the highest bid. The operator's offer included an annual concession fee of EUR32.8 million or 42.8% of revenue per annum, whichever was higher, as well as a EUR280 million upfront payment and EUR903 million in infrastructure investments over the term of the contract.

MAG/BCEG had also been a front runner

In addition to Groupe ADP/TAV’s “highest bid”, MAG/BCEG had been considered a front runner on the basis of: MAG’s desire to build up a long haul network at Sofia (it needs one), its experience of handling difficult budget airlines like Ryanair (which presently has 19% of capacity) – but not Wizz Air (28%), and the potential for BCEG to develop an associated airport city as it is doing in Manchester and to build the airport into the MoU between China and Bulgaria concerning the ‘One Belt, One Road’ initiative. (MAG had even offered to develop a EUR600 million stadium to boost Bulgaria's chances of staging the 2024 Youth Winter Olympics and 2030 soccer World Cup.)

Meridiam does not specify on its website what was offered beyond the concession fee/revenue split and investment criteria outlined previously.

In fact, local media reports suggest that the consortium ranked only third in terms of the annual concession fee but that it offered an ambitious plan for growing Sofia Airport’s infrastructure and passenger traffic, starting with repairs to the two existing airport terminals and raising passenger numbers to 8.8 million by 2022.

In 2018 Sofia Airport handled 6.96 million passengers. This was an increase of 7.3%, but that increase was well down on the previous two years, when the increase figures were in excess of 20% and 30%. 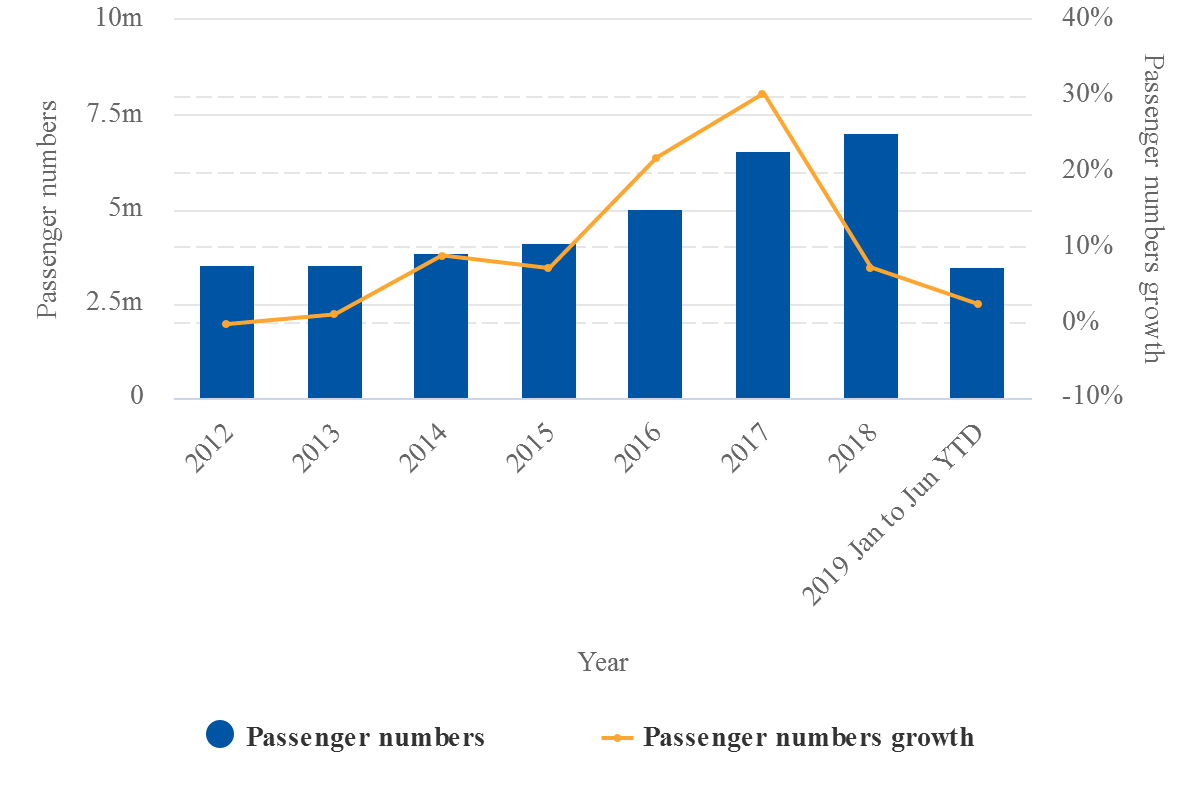 It may be that the more pragmatic need (bringing the two terminals quickly up to scratch), rather than looking too far in the future, won the day.

In the second stage, the consortium would build a third terminal and grow passenger numbers to 12.3 million by 2030, followed by two additional expansions of the new terminal, which would increase passenger traffic to 14.5 million by 2035 (at which point Terminal 1 would be reconfigured to handle only cargo) and 18 million by 2040.

On its website Meridiam does point to the fact that it “holds a strong track record and experience building sustainable and resilient infrastructure projects throughout the world, worth more [than] EUR55 billion of capital deployed.”

With this acquisition, Meridiam is classified as a ‘Major Global Investor’ in the CAPA Airport Investors Database.

Meridiam is a group of partners created to deliver infrastructure projects. Registered in Luxembourg and with offices in Paris, New York and Toronto, Meridiam has a global investment platform dedicated to investment in PPP projects throughout Europe and North America, typically over a 25-year period, so the Sofia deal is exceptional in that respect. Meridiam’s funds are invested in both greenfield and brownfield infrastructure projects.

Apart from the Sofia deal, Meridiam’s most recent deal had been a joint one led by Groupe ADP, through its subsidiary ADP International, together also with IDB Infrastructure Fund II and Edgo, to acquire a 51% stake and exclusive control in Amman Queen Alia International Airport concessionaire Airport International Group (AIG).

Munich Airport has had a designated investment division, Munich Airport International, since 2010 and it has taken an interest in Bulgaria since 2011.

A good traffic mix, but lacking in long haul services

Apart from its solid traffic growth, the airport this consortium is taking on is characterised by European markets that are reasonably well catered for, with many capital and major regional cities already served – particularly where Bulgarians have chosen to settle since the country entered the EU in 2007.

Sofia is well linked within Europe, but there is an obvious opportunity to grow links from the Bulgarian capital to medium and long haul markets 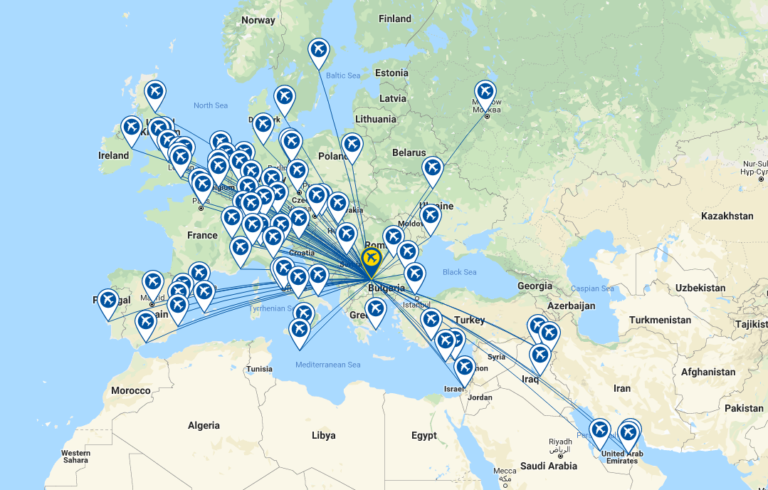 The majority of seat capacity is held by low cost carriers (50.7% in w/c 22-Jul-2019), although mainly in the form of Ryanair and Wizz Air, which between them hold 47.8% of that capacity.

The majority of seats – almost 73% – are to and from Western Europe, led by Germany and the UK. There is no great presence from airline alliances. Unaligned airlines operate 72% of seats, and only Star Alliance manages a presence of 20%.

In fact, the airport has a good traffic mix but is overly focused on Western Europe, and lacks the long haul services that would boost Bulgaria’s economy and tourism (especially Chinese ones).

The only known infrastructure addition recently was in Oct-2018, when DHL Express opened its new 10,000sqm logistics centre at Sofia Airport’s terminal 2.

So the way in which the airport presents itself to these investors is one in which urgent infrastructure work is required on the terminals and one on which a concession agreement was first proposed eight years ago; one that has been delayed, called off, relaunched and delayed again, ever since.

Bulgaria's is a reasonably strong economy, but EU membership hasn’t changed much in other ways

Bulgaria has not benefitted in the way that was expected when this former communist country entered the EU in 2007, except perhaps that many of its citizens were offered the opportunity to leave.

It does have an open economy that historically has demonstrated strong growth, but its per capita income remains the lowest among EU members and its reliance on energy imports and foreign demand for its exports makes its growth sensitive to external market conditions.

As long ago as the 1990s reforms were introduced to move the economy from a centralised, planned economy to a more liberal, market driven one. These reforms included privatisation of state-owned enterprises, liberalisation of trade, and strengthening of the tax system – changes that initially caused some economic hardships but later helped to attract investment, to spur growth, and make gradual improvements to living conditions.

Since a deep recession in 2009, real GDP growth remained slow – less than 2% annually – until 2015, when demand from EU countries for Bulgarian exports, plus an inflow of EU development funds, boosted growth to more than 3%.