China Airlines and EVA Air, Taiwan’s largest and second largest air carriers by revenue and traffic respectively, have reported sharp declines in profitability in the nine months ended 30-Sep-2011 weighed down by the poor performance of the air cargo transportation sector. The third quarter, traditionally a stronger period for earnings for Taiwanese carriers, delivered profits for both carriers, with an operating profit of around USD34 million for China Airlines and of around USD82 million for EVA Air.

Net profits for China Airlines stood at around USD29 million in the third quarter, with a net profit result of around USD42 million for EVA Air, based on CAPA calculations. However, the weakness in the cargo transportation sector, driven by a slump in the electronics industry whose shipments rely on air cargo transportation services, has impacted the carriers. Continued pressure on the cargo segment is expected in the months ahead.

China Airlines’ third quarter profit covered the losses from the first half of the year as it benefited from strong seasonal passenger demand, cross-Strait capacity increases, still-high albeit declining load factors and flat oil prices (fuel costs account for 40-45% of the carrier's expenses). These factors also aided in the profit result for EVA Air in the third quarter.

Looking forward, the carriers are still expecting an improved fourth quarter, amid solid demand for cross-Strait and European services, although continued cargo weakness will limit their profit making potential.

*Based on the conversion rate at USD1 = TWD29.8521
Source: Centre for Asia Pacific Aviation, EVA Airways and China Airlines

EVA Air, which celebrated its 20th anniversary in Jul-2011, reported an operating profit of USD58.3 million in the nine months to Sep-2011, an 84% year-on-year decline. Net profits also weakened significantly, by 85.6% to USD53.3 million. China Airlines reported a 94.1% decline in operating profit to USD24.3 million with an even larger 97.9% slump in net profitability to USD7.2 million. 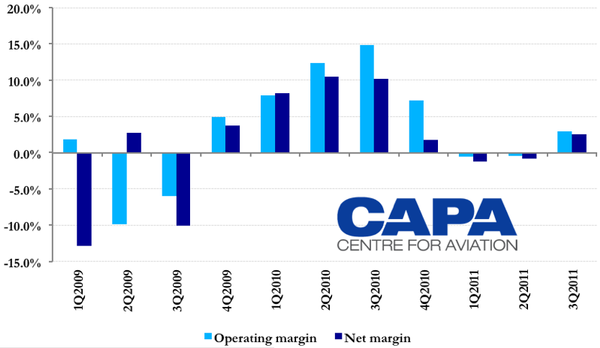 In the nine-month period, EVA Air and China Airlines reported single-digit revenue declines and high single-digit/low double-digit increases in operating costs. EVA Air’s operating revenues weakened 1.9% to USD2.6 billion and China Airlines experienced a 4.6% revenue decline to USD2.3 billion, with the strongest decline experienced in 2Q2011. Cargo comprises around 40% of China Airlines’ revenues, with cross-Strait services now accounting for around 10% of total revenues. Operating costs increased at both carriers, by 11.8% to USD2.4 billion at EVA and by 9.1% to USD3.1 billion at China Airlines. 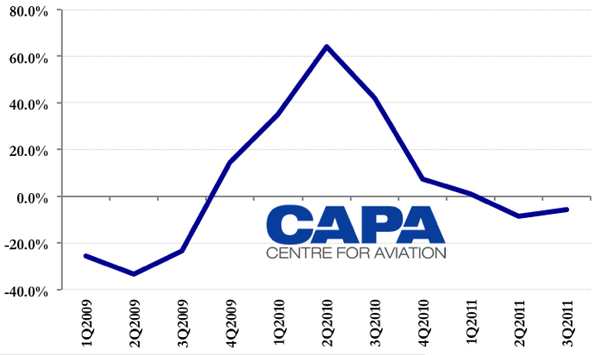 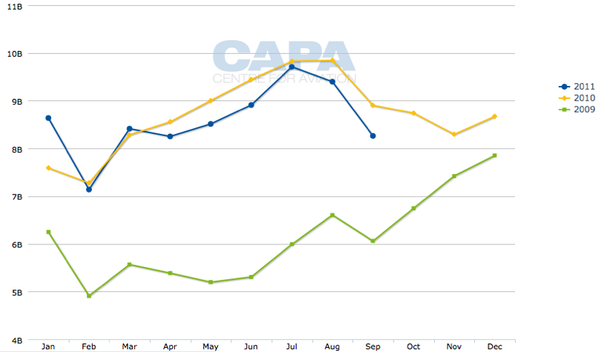 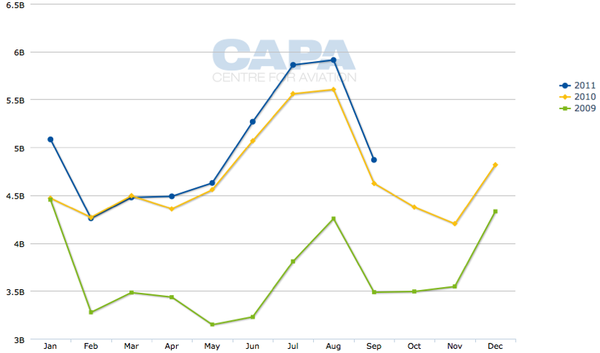 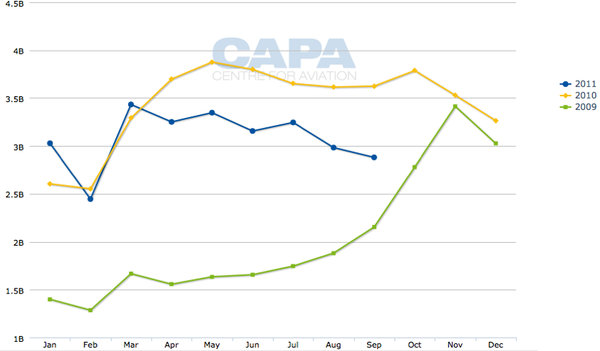 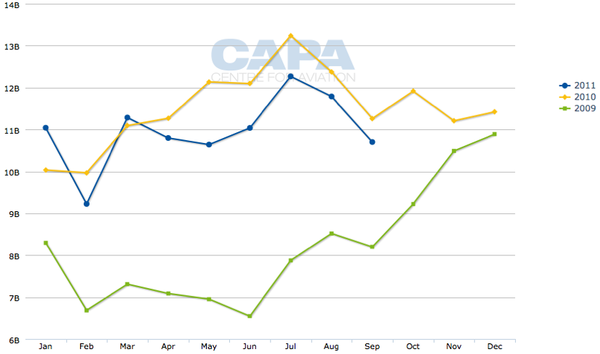 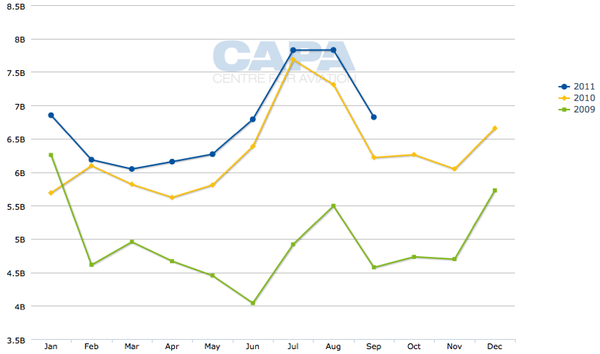 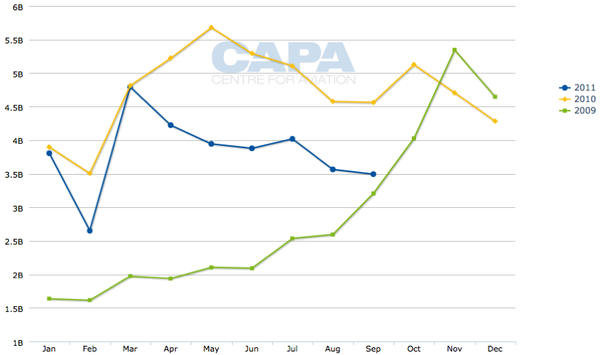 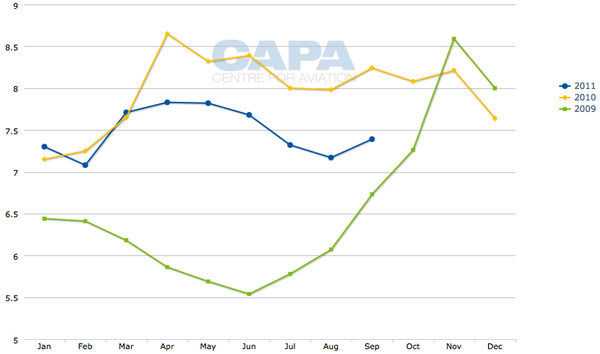 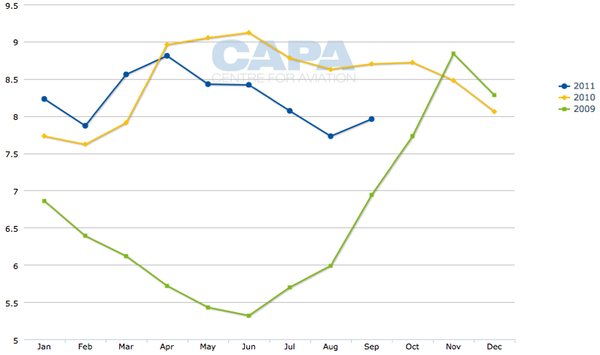 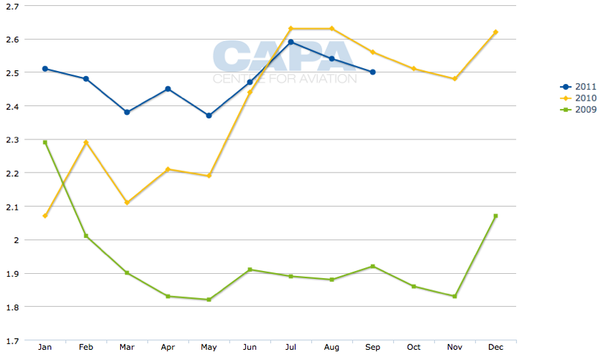 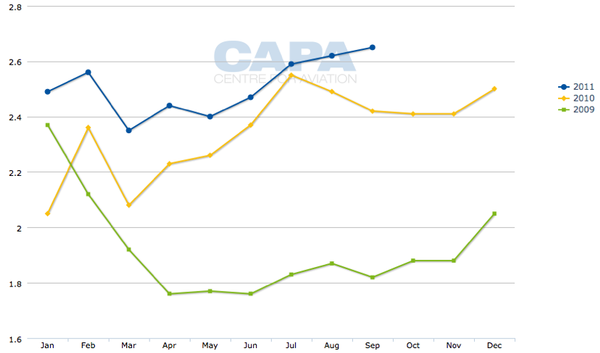 Passenger declines in 2011 at both China Airlines and EVA Air

China Airlines has reported passenger declines in all but two months of 2011 (through Sep-2011) with the smaller EVA reporting passenger growth in the past four months following declines in the first nine month of the year. 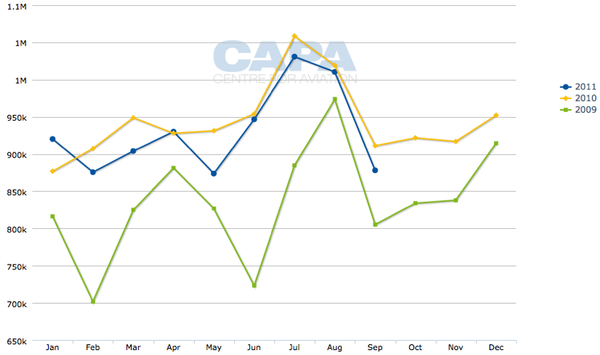 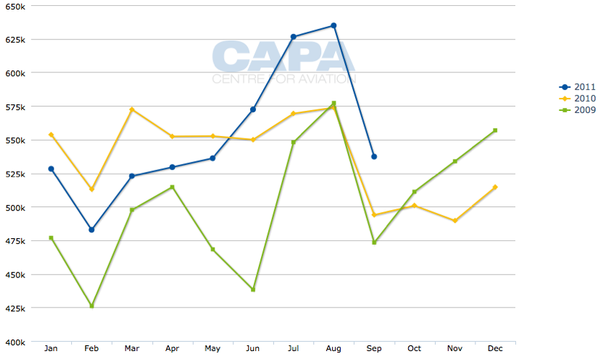 EVA Air president Chang Kuo-wei stated in late Oct-2011 that passenger demand remains robust and slightly better than previous forecasts. Traffic on North American routes has declined in light of US economic conditions and Southeast Asian routes remains unprofitable, Mr Chang said. However, passenger traffic to European destinations has grown 85% during 2011 due to the European Union’s visa-exemption granted to Taiwanese passport holders earlier this year. Routes between Taiwan and China have also seen high demand, particularly by business passengers, and remained profitable, with strong cross-Strait growth expected to continue in 2012. He added the carrier will closely monitor passenger trends.

Mr Chang also warned that the carrier expects a continued decline in air cargo shipments from Taiwan in 2012 as the air cargo business experiences its worst period in over a decade. Mr Chang said the fourth quarter is traditionally the busiest quarter for cargo due to the Christmas peak period, but as at the end of Oct-2011, there had yet to be any sizable surge in volume.

“This year has been the worst year since I entered the trade,” Mr Chang said, adding: "Previously, demand from the US and Europe continued more or less until New Year’s Eve, even with a slowing global economy, but I have not seen any [demand] this year." In light of the declining demand for air cargo, EVA Air has already sold two MD-11 freighter aircraft, with plans to sell another by the end of the year. “It is appropriate to get rid of cargo planes because of the economic changes, and the move conforms with actual operations in the market,” he said.

Taiwan's manufacturing sector is feeling the impact from a slowdown in demand from the US and Europe for high end goods such as electronics and components.

According to Taiwan’s Ministry of Finance, electronic products made up 27.2% of Taiwan’s exports in the first nine months of 2011. The value of direct shipments between Taiwan and China rose 12% to USD121 billion in the nine months to Sep-2011, with European shipments contributing 10.3% of the total and the US contributing 11.5% of the total. Taiwan’s economy grew at its slowest pace in two years last quarter according to the Statistics Bureau, which stated GDP rose 3.37% in the Sep-2011 quarter following growth of 5.02% in 2Q2011.

On the positives, Taiwan’s airlines are gearing up for a continued surge in visitors from Mainland China, as cross-Strait rights grow and restrictions are eased. Taiwan’s Government has urged its carriers to purchase more aircraft before the number of mainland tourists permitted to visit the island increases from 5 million to 10 million annually over the next three to four years. (See Background Information on Boeing's Taiwan forecast).

Taiwan and China in Jun-2011 agreed to increase the number of weekly cross-Taiwan Strait services by 50% from 370 to 558. Carriers on each side were allocated an additional 94 weekly services. This follows an expansion in weekly services in 2010 from 270 to 370.

However, Air China Taiwan GM Zhang Yun in Sep-2011 reported cross-Strait passenger revenue fell 14% year-on-year during the summer travel period due to the Shanghai World Expo last year, which has resulted in a decline in premium passengers, and the request by Taiwan’s Civil Aeronautics Administration for airlines to reduce cross-Strait fares. 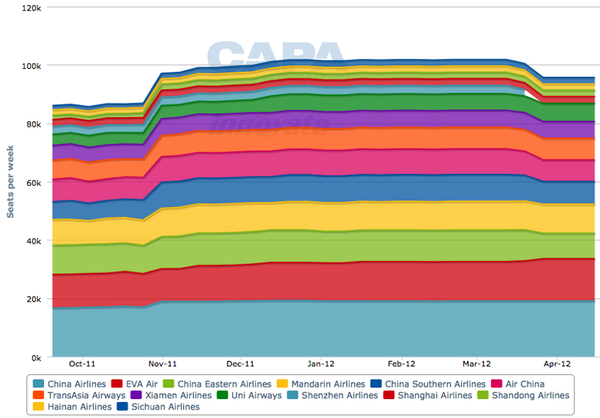 In addition to passenger services, there are 56 weekly direct cross-Strait cargo-only services. China Airlines and EVA Air each have 14 flights as the only operators in Taiwan, while Air China Cargo and China Southern Airlines are among five mainland carriers operating a combined 28 weekly services. In Taiwan, route rights are handed out based on fleet size, giving China Airlines an edge over EVA Air and other operators in the  market. China Airlines senior VP finance Roger Han stated the carrier’s cross-Straits cargo flights are "doing pretty well and our passenger flights also have pretty good loading rates”, adding: “We expect increases in our cross-strait cargo business next year,” though he described the traffic as a “niche business.”

In a global economic picture clouded with uncertainty, it is indeed fortunate China Airlines and EVA Air have a growing "niche" in China. Cargo sector weakness will pressure margins in 4Q2011 and into 2012, though rising cross-Strait services will soften in the impact.

Boeing Commercial Airplanes marketing VP Randy Tinseth, in an interview with the China Daily on 02-Nov-2011, stated Taipei is now positioned as an important hub connecting the world to major cities in mainland China including Beijing and Shanghai.

According to Mr Tinseth, Taiwan is now the world’s 20th largest purchaser of aircraft and is expected to purchase 250 aircraft, worth approximately USD60 billion, over the next 20 years. According to Taiwan's Civil Aeronautics Administration, Taiwan had 195 registered aircraft at the end of Sep-2011, including 67 registered aircraft at China Airlines (increasing to 68 as at 31-Oct-2011) and 50 at EVA Air. UNI Air had a fleet of 19 aircraft, TransAsia operated a fleet of 16 aircraft, FAT had a 10-aircraft fleet, with Mandarin Airlines (eight) and Daily Air (six) had under 10 aircraft in their respective fleets.

Meanwhile, China Airlines has stated its new membership in SkyTeam from 28-Sep-2011 will increase its network by ten times. China Airlines’ chairman Chia-Juch Chang stated joining the alliance is an "integral part of our strategy for increased international growth and profitability".

The carrier has stated it hopes to reduce costs through resource sharing through the alliance and boost revenues through enhanced codeshare operations with alliance members. The carrier stated it hopes to reduce operation costs by at least 0.5% or around TWD1 billion (USD32.89 million) in the first year of membership. "The ability to make more flexible flight arrangements might bring us TWD1 billion to TWD2 billion in additional revenue during the same period," China Airlines president Sun Hung-hsiang said.

In addition, Mr Sun stated the carrier would will seek for further cooperation with countries such as Japan, Thailand and Vietnam to extend its cargo flight service in these regions to the US and European countries.

EVA Air stated it is already laying out its plans to increase its Japan capacity from its current 51 weekly flights. China Airlines, the largest operator between Japan and Taiwan, plans to increase frequency across its eight Japan destinations to at least two per day while TransAsia Airways plans to launch scheduled service to three to four Japanese cities including Osaka and Sapporo Chitose later this year or early next year. Far Eastern Air Transport stated it will prepare its Japanese launch after it commences cross-Strait services at the end of Oct-2011 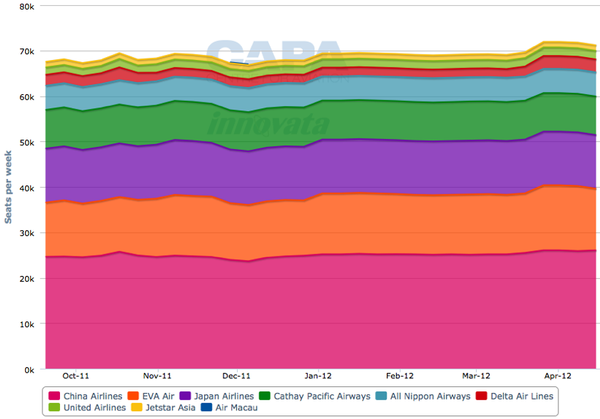 Source: CAPA - Centre for Aviation and Innovata
Schedules data is supplied by Innovata and is updated weekly