Shanghai Pudong Airport to have new slots. Allocating them strategically will help shape its future

Shanghai Pudong expects its fourth runway to be completed at the end of 2013 but new slots are unlikely to be available until some point in 2014. It is not clear – not even to Chinese carriers – how many new slots will be available, but an early estimate of 242 additional movements (121 roundtrips) between 07.00 to 22.00 each day could be possible. A more deciding factor will be how much additional airspace is opened by China's military for the runway.

The majority of the new slots at Shanghai Pudong Airport – and even upwards of 75% – will likely be allocated to China's domestic carriers. China Eastern, based at Shanghai, will have to battle Air China, which is based at Beijing but looking to establish a hub at Shanghai. As the national flag carrier, Air China and its lobbying network may do well. Private carriers Juneyao and Spring Airlines will also look to expand their home bases.

A number of carriers, including LCCs, will seek to move midnight services to daylight hours while any number of foreign carriers will seek to expand their presence or enter Shanghai for the first time. Strategic allocation will help Pudong, but the decision will be heavy, almost entirely, political.

Details about slots remain to be worked out

Pudong's slots could potentially be available within a year, requiring airlines to have appropriate fleet growth plans as well as begin to make preparations for IATA's slot coordination conference. But Shanghai Pudong's fourth runway maintains an element of unknown, typical for matters in China. The country largely dances to the beat of its own drum and the industry accepts this, hoping for value in long-term partnerships. Airframe manufacturers, for example, set aside a sizeable number of manufacturing slots for Chinese carriers even if no MOU or LOI is signed, as aircraft orders are typically made in coordination with the country's wider economic agendas.

Airlines will need to develop various contingency plans based on whether or not they are successful in obtaining a slot, the timing of which could be outside their control.

It is also not clear how quickly the full slot allotment would be made available, regardless of operational possibilities. Regulators could want to see a phase-in of movements, or air traffic (controlled by China's military – which the government cannot always exert influence on) may not be opened as fast enough to support the fourth runway. Already most airports today could see significant movement increases with existing terminals and runways if only more airspace were available (more so in China than elsewhere in the world).

Noise restrictions that might limit slots are not yet defined. Some runway movements will be reserved for test flight functions supporting COMAC's C919 aircraft. As production ramps up later in the decade more movements will be needed, but a fifth runway and third terminal building are due to open by the end of 2015.

At the start of the northern summer scheduling season, Shanghai Pudong sees about 54 movements an hour from 07.00 to 22.00, with a concentration of those movements between 10.00 and 19.00 (there is a cap of 65 movements an hour). On a theoretical (probably over-optimistic) assumption that the fourth runway would allow a proportionate increase in slots, another 242 movements (121 roundtrips) could be made available from 07.00 to 22.00 with additional slots for hours outside that window.

Shanghai-based China Eastern, and wholly-owned subsidiary Shanghai Airlines, will account for about 39% of movements in northern summer, making it the largest at Pudong (individually, China Eastern accounts for 31% of movements and Shanghai Airlines 8%). Second largest is China Southern (based in Guangzhou and the country's largest domestic operator) at 10% and then Air China at 9%. 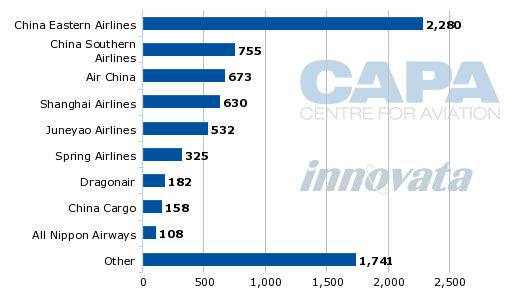 It does not require much imagination to see a scenario where half or more of the available slots go to China's Big Three airlines: Air China, China Eastern and China Southern. The biggest battle will be between Air China and China Eastern. Slot allocation will largely be a government decision with lots of parties weighing in. Pudong airport and Shanghai officials will lobby for their local carriers to receive slots at their expanded home airport, but Air China will call on its contacts in the capital to ensure the carrier receives a favourable number of slots. Although the Big Three are all state-owned, Air China is the flagship and enjoys privileges as well as lobbying power.

While other airports like Haneda or Washington National justify why certain airlines receive the slots they do, no such determination will be made for Pudong slots, largely because the decision will not relate to an airline's performance, growth prospects or ability to link new cities to Pudong. The largest lobby or loudest voice tends to prevail. 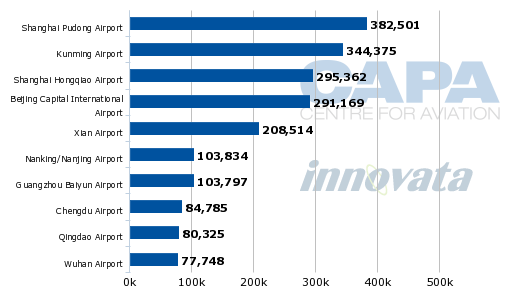 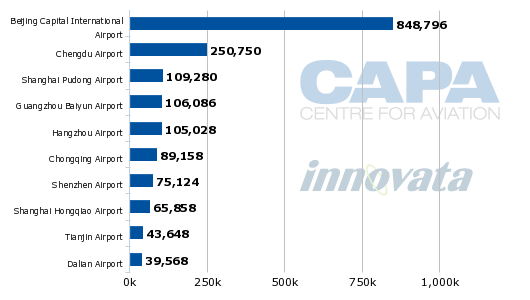 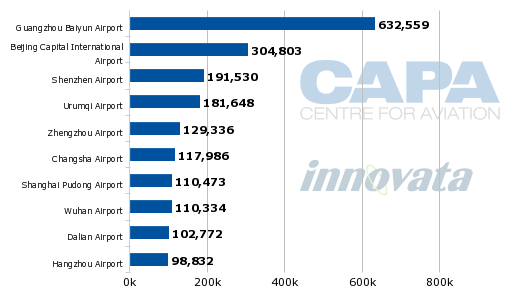 Then other Chinese airlines will lobby for slots

Juneyao and Spring Airlines, both privately owned and based at Shanghai, will seek to secure as many slots as possible but will be the underdogs in the domestic market, especially as China now seeks to slowdown the growth of private carriers in favour of state-owned ones. On a merit basis Juneyao and Spring would be most deserving because of their efficiencies and lower fares – but this presents a threat to state-owned carriers.

Spring has branched out, establishing bases at Hangzhou, Shenyang and Shijiazhuang (with hopes for a Kunming base too) but Juneyao is still largely dependent on Shanghai. Spring has overtaken Juneyao, with 35 A320s to Juneyao's 29. Additional slots gained could be tilted in Spring's favour given its size and under-representation at Pudong compared to Juneyao.

Juneyao and Spring will no doubt favour growth at Shanghai Pudong versus other cities, a calculation they may need to make if they seek sizeable numbers of Pudong slots without yet having permission to take extra aircraft to cover growth there in addition to other markets. 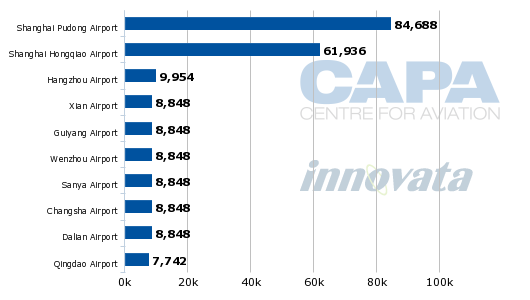 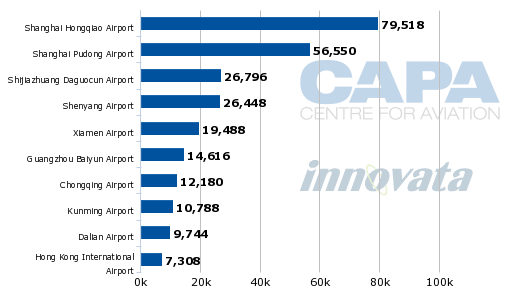 And finally, some slots will be given to foreign airlines

A number of LCCs would likely consider serving Shanghai if more convenient slots were made available. Inevitably too a number of full-service carriers will be lining up for another slot. Singapore Airlines for one was not able to gain back a slot pair it left unused one winter season during the global financial crisis.

Handing out of slots to international carriers will be a highly political exercise. China will be looking to see what reciprocal gains its carriers can receive. Here Japan and South Korea will be particularly in the sights; the convenient downtown airports of Seoul Gimpo and Tokyo Haneda are slot-restricted. China would likely want some form of reciprocal grants, even if slots in Shanghai are only being made available at Pudong and not Shanghai's downtown airport of Hongqiao.

Shanghai Pudong traffic has grown 300% in a decade

A fierce contest for slots at Shanghai Pudong would have been unimaginable just a decade ago when Shanghai Pudong had a fraction of the volumes it sees today. In 2002 the airport saw 11 million passengers, growing in 2012 to just under 45 million. Pudong's third runway, which opened in 2008, did not immediately see slots get taken up as the global financial crisis wreaked havoc, including unprofitability at China's Big Three airlines. But by the time of the rebound in 2010, traffic spiked and slots at peak hour were largely gone. There is gradual expansion as more of China's airspace opens. 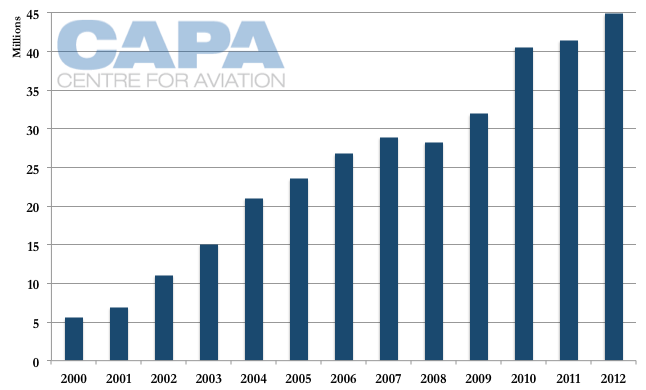 Half of Shanghai Pudong's capacity is international, remarkably high by Chinese standards

Across Chinese airports, 21% of seat capacity is dedicated to international markets. At Pudong the figure is 50%. Chinese carriers feature heavily in the top 10, in addition to All Nippon Airways, Dragonair, Japan Airlines and Singapore Airlines. 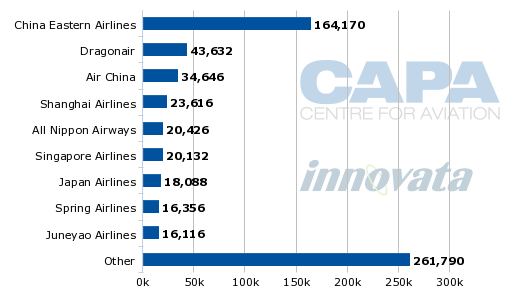 Northeast Asia accounts for 49% of international seat capacity with Southeast Asia the next largest region with a 20% share. The bulk of these northeast Asian seats are used for point-to-point operations, but they present a remarkable opportunity too for Chinese airlines to penetrate sixth freedom markets to the west, and even to north America. 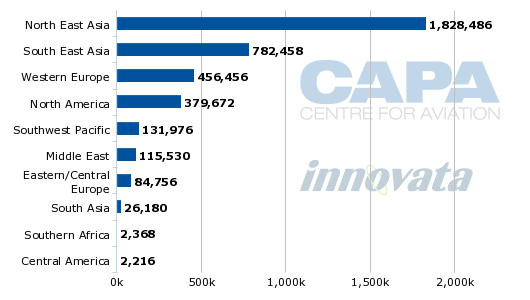 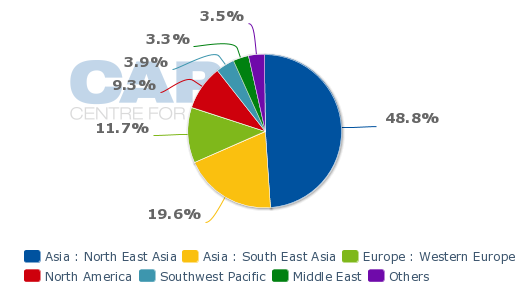 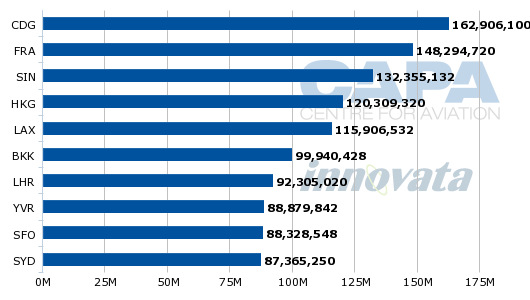 Japan and Hong Kong are the two largest countries/administrative regions for arriving seats followed by South Korea, reflecting the O&D traffic from those countries but also the large connecting traffic airlines from each country bring in to China. 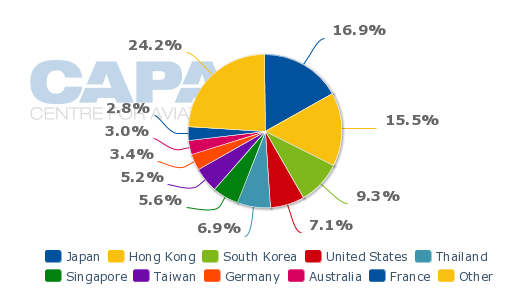 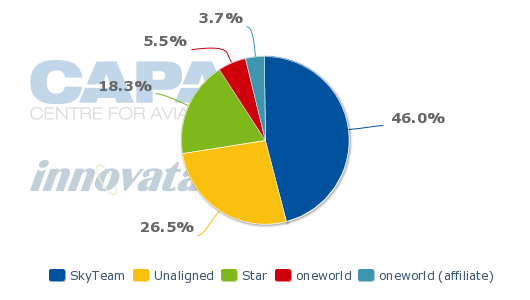 A third of Pudong's slots are held by foreign airlines

Chinese carriers dominate as the largest holder of slots at Shanghai Pudong.

In total they account for two-thirds of scheduled slot movements with foreign carriers comprising the rest. Dragonair, ANA, JAL, SIA and Asiana are the largest international holders of slots. 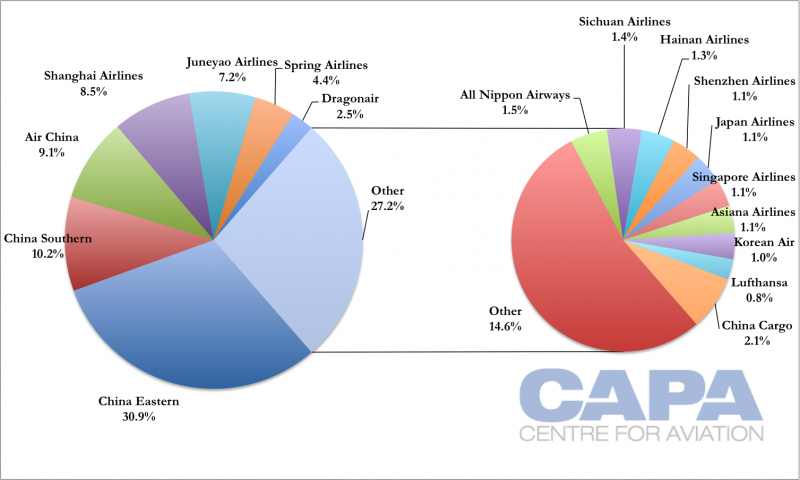 Pudong aims to be able to handle 100 million passengers and 5.5 million tonnes of cargo in 2015, although throughput will be below those levels as they include figures for late night flights.

But Pudong's growth is nonetheless impressive. If slots are opened quickly enough in 2014, it could become China's second-largest airport, overtaking Guangzhou. Guangzhou in 2012 carried 48.3 million passengers to Pudong's 44.8 million, and transported 1.2 million tons of cargo to Pudong's 2.9 million.

The allocation of slots over coming months should in a perfect world be made on the basis, first of fairness (whatever that nebulous term means in the circumstances), but also of what is in Pudong's best strategic interests, as new opportunities for stimulating transfer traffic opportunities open up. Sixth freedom operators are a valuable area of opportunity, both in terms of stimulating additional traffic as well as in the potential for promoting duty free sales to transfer passengers. But for Chinese airlines international services are typically loss-making, some substantially so. Although they are targeting sixth freedom traffic, that is low-yielding.

Other factors, such as taking account of likely airline partnerships – including, but not exclusively, within global alliances – should also in a theoretical world be criteria applied in determining which airlines receive these valuable resources. This can shape the type of additional passengers Pudong will receive.

Chinese aviation – and airports like Pudong are in the vanguard of this – is undergoing substantial strategic shifts as the nation's airlines focus increasingly on international operations. Getting the allocations of the airport's new slots right will have long term repercussions well beyond immediate trading benefits. But more strategic allocation is unlikely to occur until, at least, Pudong's fourth runway. Third runway slot allocation will look to past practices rather than new.