The Saudi Arabian General Authority of Civil Aviation (GACA) has confirmed that Qatar Airways and Gulf Air will launch domestic operations in the country before the end of 2013. The granting of the licences to two foreign carriers to operate domestic service is an unparalleled move of openness in the Middle East. It will start a new era for travel within the country.

The opening of the Saudi Arabian market presents a new challenge to national airline Saudia. However, after several years of facing competition from domestic carriers and a thorough modernisation ahead of its entry into SkyTeam in 2012, as well as the extended international reach that alliance membership offers it, the carrier is in a better position now to meet the latest threat.

Saudia, the domestic giant faces a new era of competition

With a Saudi Government-approved monopoly in place for more than 50 years, the Saudi domestic market had long been stunted by a lack of capacity growth from Saudia. In an attempt to remedy the situation and promote growth of its aviation market, in 2007, the GACA granted operating licences to two new carriers (nasair and Sama), ending Saudia’s decades long government mandated monopoly with the aim of triggering new growth in the local and international travel market. Along with these new carriers, Saudi regulators have implemented a number of policies to encourage more travel and support the local aviation sector.

After an initial spurt with the launch of the two new airlines, the hoped for growth has failed to occur. Since the granting of the new operating licences, domestic traffic has grown at an average of only around 2%. 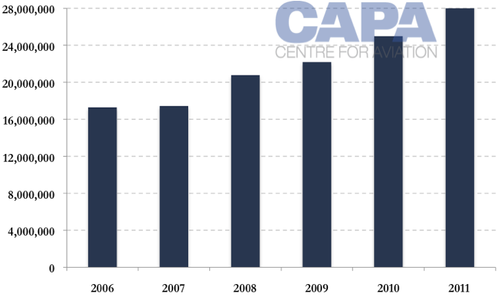 Saudia controls 94% of the Saudi domestic market, the largest local travel market in the Middle East, while its surviving domestic rival nasair handles the remaining 6%. The second LCC, Sama, declared bankruptcy in 2010, after accumulated losses of nearly USD220 million. The carrier cited the uneven competitive landscape and unfavourable operating conditions, and held under 2% of the domestic market when it ceased operations. While nasair has not yet managed to report a break-even year, the carrier has high hopes for 2013, after stronger financial performances in the second half of 2012 and during early 2013.

The sluggish growth in the domestic market is in direct contrast to the international travel market, which has seen persistent double-digit traffic growth over the same period. 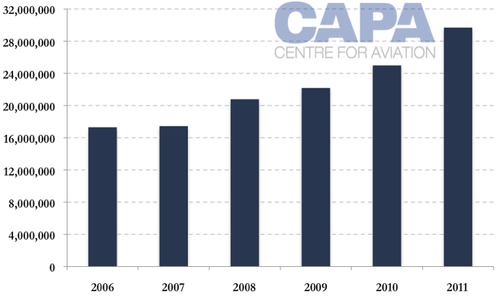 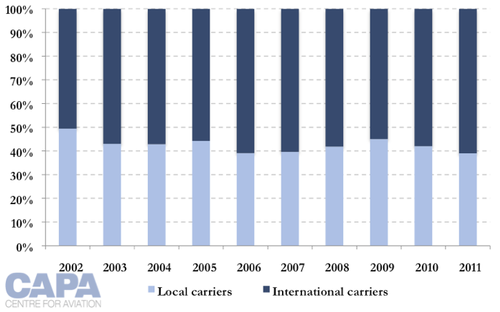 With a government mandated domestic fare cap in place, ticket prices have generally been below profitable levels for all but the most heavily travelled domestic routes. The maximum fare between Riyadh and Damman is just SAR150 (USD40). This now-outdated policy was designed to prevent monopoly price gouging while Saudia was the only operator. But restricting pricing freedom for LCCs prevents them from offering a range of very low prices, while ramping up as departure dates approach. As a result, nasair has switched the majority of its capacity to international routes, which offered no such fare limitations.

Also mitigating against domestic growth have been the subsidies provided to Saudia, which were not available to the new LCCs. According to Sulaiman Al-Hamdan, Group CEO of Nas Holding, it remains cheaper for the carrier to purchase its fuel at overseas stations, despite the fact that Saudi Arabia is the world’s largest producer of oil. Not so for Saudia.

Saudi Arabia’s lack of adequate domestic aviation infrastructure, particularly for secondary and smaller regional destinations, is also mitigating against successful domestic operations. After decades of having Saudia dominate most aspects of airport operations, the smaller airports were unprepared to adapt to the low-cost operating model.

Despite the problems, the Saudi market has tremendous potential for growth. Both nasair and Saudia have reported that the increase in passenger demand, both domestic and international, outweighs their ability to add capacity into the market.

The country’s population is young and affluent and increasingly inclined to travel. The Saudi Government is also heavily promoting domestic tourism and investing to build tourism infrastructure. General aviation infrastructure, particularly air traffic control and airport capacity, has been significantly upgraded over the past few years.

The Saudi Government has outlined a plan to invest more than USD30 billion in its airports by 2020, including USD10 billion in private investment for the sector. More than USD12.5 billion has already been earmarked for the country’s four main international airports at Jeddah, Riyadh, Dammam and Madinah. These four airports handle 91.5% of total air travel in the country, including 72.5% of domestic travel. 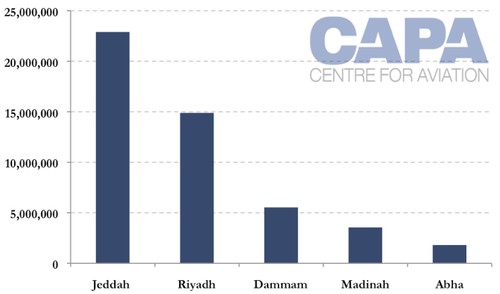 Alongside this, another USD5.4 billion has been committed to the development of the country’s domestic airports.

Several of the mid-size domestic airports such as Al-Gassim, Abha, Tabuk and Yanbu have been granted permission to handle limited international traffic, relieving some congestion at the main facilities and encouraging direct flights to some tourism destinations.

Transformation is continuing at Saudia, but much of the hard work is already completed

Outside of the opening of the domestic market to more competition, Saudia has made major strides operationally. Its transformation was crowned in May-2012, when the carrier formally joined SkyTeam alliance.

Saudia became the alliance's 16th global member and its first member in the Middle East. Membership of SkyTeam, along with Lebanon’s Middle East Airlines joining too, filled the long-standing Middle East black hole in the SkyTeam Alliance’s global network coverage. Rivals Star and oneworld already had members from the Middle East/North Africa region. Qatar Airways is due to join oneworld by the end of the 2013.

Ahead of its ascension to alliance membership, Saudia underwent a thorough modernisation. The carrier significantly updated its in-flight product, in order to meet the standards required by the alliance. The carrier also transformed its IT and reservation and distribution systems, signing major global distribution system deals with Travelport and Sabre and an IT agreement with SITA.

The carrier also shed most of its older aircraft – primarily 747s and MD-80s – and acquired a large fleet of new narrowbodies, through orders with Airbus as well as leasing agreements.

The airline has ordered 90 new aircraft, 62 of which have already been delivered. Another 12 aircraft are due to be delivered to the carrier this year.

In the next few years Saudia will start to take delivery of large numbers of next generation widebodies. In 2010, the airline ordered 12 777-300ERs, as well as options for another 10 aircraft, which it has already exercised. It also ordered eight 787s at the same time, which are due to start delivery either in late 2015 or early 2016.

The carrier's caro unit, Saudi Airlines Cargo, is also expanding with next generation widebody equipment. It took delivery of two 747-8Fs in Mar-2013. The first of these is due to go into service in May-2013, followed by the second in Jun-2013. Both aircraft will serve the Asia to Europe market, filling demand for greater capacity on these routes. They will serve alongside the carrier's fleet of 15 older widebodies - comprising four MD-11Fs, four 747-400Fs, two 747-200Fs and one A310F.

While the carrier’s operational transformation has been making visible progress, Saudia’s privatisation process has dragged on for the best part of a decade.

Under the privatisation plan, the airline has been split into six corporatised entities, which are progressively being sold off piece by piece. The catering, cargo, maintenance, private aviation, flight academy and ground handling entities will all undergo partial privatisation, with privatisation of the mainline commercial operation to follow at the end.

The formal go-ahead for the division of the carrier into strategic business units was granted in 2006. However, it wasn’t until 2010 that Saudia signed letters of intent with Al-Ahli Capital and Morgan Stanley to become financial consultants for the privatisation of the core airline unit.

The pace of the privatisation process has been at best fitful, upset by the regional unrest and the global economic slowdown, but mostly by airline and bureaucratic inertia. Some 30% of the carrier’s cargo unit was sold in 2008, followed by the sale of 30% of its catering unit in 2012, for approximately USD350 million. Several deadlines for partial sales of its MRO unit came and went through 2009 and 2010. Deadlines for a further sale of shares in the cargo unit, as well as partial sales of the ground services and aviation academy were also passed in 2011.

Next in line to be sold is the MRO unit. In late 2012, the carrier confirmed that the MRO unit is in the final stages of privatisation. The carrier projects that the unit will be valued at up to USD1.9 billion, with the process expected to be completed during 2013.

The MRO market is booming in Saudi Arabia, both for commercial and private aviation and business jets. Saudia projects its MRO operation will expand more than 40% over the next five years, employing more than 8,000 staff. Meanwhile, Middle East Propulsion Company (MEPC), a joint venture between Pratt & Whitney and a group led by Saudia, opened its new aircraft-engine MRO unit in Riyadh.

Saudi Arabia faces a major new competitive paradigm from the end of 2013 onwards. After warming up with nasair and Sama, Saudia will face two well-established carriers with brands that are well recognised in the region.

In addition, the airline is slowly being weaned off government support, in order to assure the new entrants of a level playing field in the domestic market. According to the GACA, all domestic operators will be sold jet fuel at equal rates. The authority has promised fuel prices will be substantially less than in neighbouring countries.

For the new entrants, the major sticking point in the Saudi market remains the domestic fare cap. Both Saudia and nasair have reported that they are unable to operate the majority of their domestic routes profitably. They have attempted to use smaller Embraer regional jets for the routes, with Saudia pioneering the use of the E170/E190 for commercial services in the Middle East. However, the GACA plans to address this too, having promised in late 2012 that it would look at the domestic pricing policy and develop a comprehensive strategic plan for the introduction of the new carriers into the market.

Qatar Airways is the greatest looming competitive threat in this respect. It is one of the Middle East’s best regarded and fastest expanding carriers, with a service ethos that is of the highest level. It has an order backlog of more than 200 aircraft, including current generation and next generation narrowbodies which it could easily deploy in the Saudi market. It could also deploy widebody aircraft into the market, to compete with Saudia’s domestic 777 and A330 services.

Another entrant, Gulf Air, is not it such a strong position. It doesn’t have the same size, financial strength or the extensive order backlog. The carrier’s management has its hands full with its restructuring and cost cutting efforts, accompanied by a mass of political issues at home. However, if the carrier feels that the Saudi market is sufficiently attractive, it could easily divert a portion of its narrowbody strength or move to lease aircraft to use for Saudi operations.

Neither carrier has yet unveiled where they will base themselves in Saudi Arabia, or the aircraft and routes they will operate. Both carriers will also be eager to operate international routes to/from Saudi destinations. The terms of the new operating licences allow the airlines the same route rights as any other Saudi Arabian based airline (although it is less than clear on the ownership limits that these airlines will face in other markets).