nasair has long been the junior partner in the Saudi Arabian aviation market, but five years into operations its fortunes have begun to change. In 3Q2012, the airline reported its first-ever quarterly profit. It also managed to breakeven in the final quarter of the year, ending 2012 with a small loss. Load factors have hit a record 75% and nasair has turned its operational performance around to generate more revenue.

The low-cost carrier was launched in 2007, along with fellow LCC Sama. The arrival of two new carriers in the previous monopoly controlled Saudi Arabian domestic market promised a boom for the region’s largest domestic travel market. Since launch the carrier has transported more than 11 million passengers.

However, nasair has struggled in the domestic market, competing against the much larger and heavily subsidised Saudia, and facing local challenges such as the domestic fare cap and airport infrastructure constraints. Sama declared bankruptcy in 2010, with debts of more than USD200 million, while nasair has yet to have breakeven over a 12-month period.

The turn-around has been brought about by carefully re-matching of the airline’s capacity to its demand and a significant improvement in the carrier’s operational performance. A new business plan was approved in early 2013 and the carrier’s new CEO, François Bouteiller, who assumed his position in Mar-2012 and has been charged with executing the carrier’s expansion strategy. Mr Bouteiller's mission is to “open widely into the global perspectives and work to diversify revenue sources to increase profitability”.

Part of the turn-around has also been a major switch in operational focus to shorter routes. In 2012, the airline abandoned services to its Indian destinations at Mumbai, Khozikode and Kochin. The services were tying up A320s that could be used more profitably elsewhere and the carrier was competing at a disadvantage against the high-capacity widebodies from other airlines.

The Kochin route alone occupied a single aircraft for approximately 14 hours. Switching the A320s to shorter routes has allowed the aircraft to increase its revenues, at the price of a modest decrease in yields. According to Mr Al-Hamdan, nasair is able to operate up to six services to Dubai in the same time.

Unable to operate profitably in the domestic market, nasair has increasingly switched its focus to international routes. Its international network now covers Pakistan, the UAE, Kuwait, Jordan Syria, Lebanon, Turkey, Sudan and Egypt, with more destinations in the planning stages.

The domestic market has not been forgotten completely. The airline operates 19 domestic routes in Saudi Arabia to six destinations. In 2012, the carrier’s management decided to significantly increase its domestic presence, with more flights from Jeddah, Riyadh and Dammam. In Jan-2013, it introduced Taif and Yanbu as new domestic destinations.

Seat capacity at nasair is now split almost evenly between domestic and international markets. However, given the longer routes in its international network, overall ASKs are skewed towards international operations. 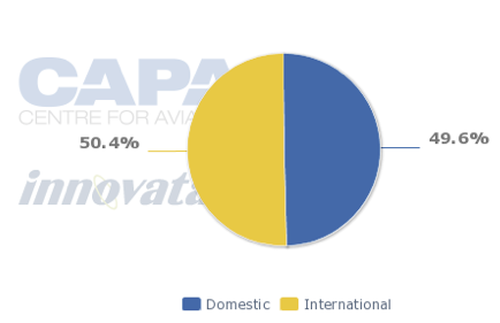 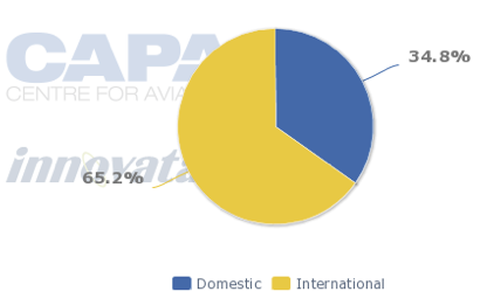 The carrier will be using the new Al Maktoum International Airport in Dubai as one of its springboards for renewed international expansion. The new airport opens to passenger traffic in Oct-2013 and nasair has announced it plans to operate better than 50 flights per week between the new facility and “all major Saudi cities”.

At the same time, the carrier will maintain its present operations between Saudi Arabia and Dubai International Airport. At present, the carrier operates a daily Jeddah-Dubai service with A320s and 18 weekly flights from Riyadh to Dubai with a mix of A320s and E190s. The Riyadh-Dubai route is nasair's largest international route. 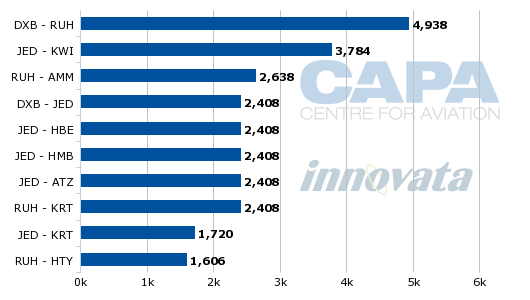 Mr Bouteiller expects that the new services will stimulate a further increase in destinations between the new airport and other destinations in nasair's network, as well as encourage leisure traffic between Saudi Arabia and the UAE.

The carrier is increasingly turning to the world of social media to ensure its gets the best possible value out of its publicity campaigns as it engages with its customer base. With soaring internet penetration rates in the country, the Saudi population is becoming increasingly engaged with social media. Almost a quarter of the population are now active users of Facebook, Twitter, LinkedIn or other social media channels, with more than 50% penetration in the 18-35 age demographic.

According to a 2012 study by The Social Clinic and The Loft, Saudi Arabia has the highest Facebook user rate in the Middle East, with over six million users, two million of which use it exclusively on mobile devices such as smartphones or tablets. Twitter use exploded in 2012, increasing 3000%. Saudi Arabia’s population is the largest user of the micro-blogging site in the Middle East, with an average of 50 million tweets per month. The country is responsible for 30% of Arabic language tweets globally.

In late 2012, nasair won awards for “most popular airline on social media” and “best social media engagement for a company”. Its Facebook and Twitter accounts are active parts of its marketing campaigns, providing information to travellers, promoting its latest specials and events and resolving travel problems. The carrier has around 61,000 followers on Twitter and around 1.17 million ‘Likes’ on Facebook. The carrier’s much larger national rival Saudia has also embraced social media with similar enthusiasm in the past two years.

In addition to online distribution and social media, nasair is also reverting to some more traditional distribution channels. In Sep-2012, the airline signed a content agreement with Travelport. This is the first time that the Riyadh-based airline has chosen to distribute its fares through the GDS channel. The new multi-year agreement will give Travelport’s Galileo and Worldspan-connected travel agents worldwide access to nasair’s full fare inventory.

In addition to new content agreement, Travelport and nasair have also sealed a strategic airline IT services deal. The carrier has selected Travelport’s e-ticket database hosting service, and Travelport will be offering a bank settlement plan (BSP) for nasair bookings in countries where nasair has joined the local BSP.

Fleet expansion to support ambitions and an IPO in the wings

To meet its 2013 goal of a 50% increase in passenger traffic, nasair is also undergoing a major fleet expansion. The airline currently operates a fleet of nine A320s and seven E190/E195 regional jets. It has also wet leased a 747 for pilgrimage services to destinations such as Malaysia and Indonesia.

In early Apr-2013, the airline announced a lease agreement with Air Lease Corporation for three A320s. The three aircraft are contracted on six year leases and will be delivered in May-2013, Aug-2013 and Oct-2013. The new aircraft will be used for expanding the carrier’s route network, as well as increasing flight frequencies on their most popular markets, although specifics have not yet been forthcoming.

In addition to the reinforcement of the A320 fleet, the airline is looking to divest its Embraer regional jets, in order to further reduce its costs and improve productivity. Settling on a single fleet type will simplify its planning and operations and cut its MRO costs.

Originally introduced in 2009 to help serve the unprofitable domestic market, including required social routes, nasair operates six E190s and one E195. It has already disposed of one other E195. The aircraft will be phased out within the next two years. It plans to replace them with more A320s. By 2016, the airline expects to increase its operational A320 fleet to around 35 aircraft, increasing to 40 by 2017.

To fund its fleet expansion, nasair is considering an initial public offering, possibly in 2014. An IPO has been on the cards for the carrier for a number of years, but the combination of continued losses, the global financial downturn and the regional instability in the Middle East affecting local markets has kept any offering from eventuating.

In late Dec-2012, Mr Al Hamdan said the carrier was tentatively targeting a 1Q2014 date for the IPO. The listing would provide funding for approximately 15-20 new narrowbody aircraft. The carrier has announced the appointment of Saudi Fransi Capital as financial advisor for its planned IPO.

Increasing passenger traffic from three million in 2012 to 4.5 million in 2013 is not going to be an easy task for the airline. Neither is doubling its annual revenue.

With the expansion of the fleet, and a renewed international expansion, the carrier is certainly making a valiant effort to reach its goals. Even if it doesn’t manage to get all the way to its revenue and passenger objectives, the carrier will be doing well if it manages to reach its goal of full year profitability. The carrier has sensibly abandoned plans for a second hub and delayed its IPO to allow it to concentrate on operating profitably.

After five years of losses at nasair, NAS Group deserve some return for its patience with the carrier. nasair is no longer the new kid on the block in the Middle East and increasingly it is receiving better treatment from Saudi authorities. The carrier now needs to follow the example set by the other low-cost carriers in the Middle East – including Air Arabia, Jazeera Airways and flydubai – and move from loss to profit.

The main threat to nasair is the fact that the Saudi domestic market is about to be opened up to foreign competition for the very first time, in the biggest shake-up of the market since the two LCC operating licences were awarded in 2007. Gulf Air and Qatar Airways will be permitted to operate both domestic and international services by the Saudi General Authority for Civil Aviation.

The licences are due to be awarded during 2013, dramatically increasing the level of competition in the Saudi domestic market. When the two well-funded carriers start operating within Saudi Arabia, likely in late 2013, nasair will see a sudden reduction in its share of its home market. nasair has been able to build up its market share over the years, reaching 8% of total capacity (including 13% of domestic and 13% of international capacity). 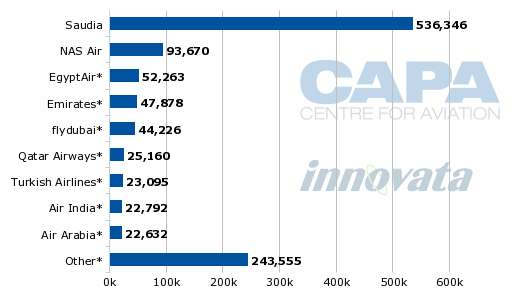 With the Saudi travel market growing and still under-served, Mr Bouteiller believes that competition could actually make things better for the airline: ending Saudia’s special treatment and reducing costs in terms of fuel and infrastructure. Mr Bouteiller said nasair would “encourage competition but on a level playing field".