The majority of European carriers’ shares rose on Friday (19-Mar-2010) as oil prices (-1.9%) made their biggest fall in six weeks, to USD80.68. Wider European markets, except for the UK, were weaker, on continued concerns over Greece’s debt issues. The concerns pushed the Euro to its worst weekly performance against the US Dollar since Jan-2010.

SAS (+3.7%) was the day’s biggest gainer after it priced a five year, SEK1.6 billion (EUR165 million) offering of convertible bonds, upsizing the initial size of the offering from SEK1.42 billion (EUR146 million) and meeting a hurdle set by key shareholders for their support in an upcoming share issue.

The senior unsecured bonds will have an annual coupon of 7.5% payable quarterly in arrears and will be convertible at a conversion price of SEK3.59 equal to a conversion premium of 30% of the volume weighted average price of the company's shares on NASDAQ OMX Stockholm between launch and pricing on 19-Mar-2010. The Bonds are expected to be settled on or around 01-Apr-2010, with proceeds to be used to repay other borrowings.

El Al (+3.3%) continued its recent surge. During trading, the carrier signed a codeshare agreement with Atlasjet, covering daily services between Israel and Istanbul (operated by El Al) from Apr-2010. Services to the two points were stopped a few years ago due to safety concerns.

Aeroflot (+1.1%), was also up, after the carrier stated the day prior that its share of the Russian passenger market reached 25% in 2009, adding that it net profit target for 2009 was fulfilled. However, the carrier stated it did not reach the 2008 net profit level in 2009, due to the global economic crisis.

British Airways (+0.4%) rose during the last day of negotiations with its cabin crew union, Unite. The two were unable to reach an agreement, with the union consequently launching strike action on 20-Mar-2010.

British Airways stated over the weekend that a number of staff have still turned up to work, including 97% of rostered staff at London Gatwick Airport and 52% at London Heathrow Airport, allowing it to operate to its revised schedule and adding further flights. However, Unite denied the claims, stating 80% of staff turned out to support the union. See related report: Will the British Airways strike light a ring of fire, as flight attendants of the world unite? 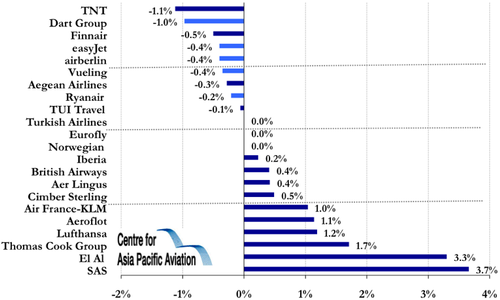