Ryanair: profits are still growing, up 12%, "prepared for signs of a market slowdown or recession"

Ryanair's results statement for 1Q2017 (Apr-Jun quarter) came as something of a relief for the European airline sector. The continent's leading LCC and largest airline by passenger numbers reported modest growth in profits and – more importantly – reiterated its FY2017 target of a 12% increase in annual net profit.

This came hard on the heels of a profit warning from Europe's number two LCC easyJet. Added to positive quarterly results from Norwegian and Wizz Air recently, Ryanair's announcement provides a more optimistic tone, at least for the low cost end of the market.

That said, Ryanair is also preparing the ground for a possible further weakening of an already depressed pricing environment in Europe, pointing to geopolitical uncertainties, including terrorist activity and Brexit. With a lower cost per passenger than any competitor and a very strong balance sheet, Ryanair is well placed for any airline market downturn.

Passenger numbers grew by 10% to 31.2 million and load factor gained 2ppts to 94%, further validating Ryanair's 'Always Getting Better' programme. The continued increase in what was already a very high load was stimulated by a 10% drop in average fare to EUR40. Ryanair had anticipated that 1H average fares would fall by between 5% and 7%. Its outlook for average fares in 1H is now a fall of 8%, with a 2Q drop of at least 6%.

The bigger than expected decline in average fares in 1Q reflected demand weakness due to factors that included terrorist events and ATC strikes. The weakening of GBP since the Brexit vote in late Jun-2016 further adds to downward yield pressure.

Although Ryanair has said that longer term Brexit risks were manageable, it plans to "pivot" its growth away from UK airports over the next two years. It still expects to grow in the UK, but at a slower pace than previously planned. The UK is Ryanair's biggest market, accounting for one quarter of its international seats in the week of 25-Jul-2016, according to data from OAG. 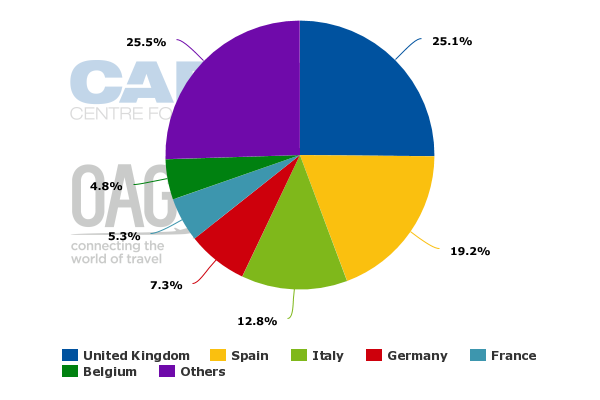 After making a load factor gain of 11ppts in two years, to a level of 93% in FY2016, Ryanair has said that it expects it to be flat year-on-year in FY2017. Nevertheless, its load factor has increased in each of the first three months of this financial year so far. Ryanair describes itself as following a "load factor active, price passive" approach.

Ryanair sets fares in order to achieve the desired load factor. In 1Q2017, although soft demand conditions required lower fares than previously anticipated, the further improvement in load factor suggests that the 10% drop in average fares may have been a bigger fall than was necessary.

Although Ryanair says that it still expects FY2017 load factor in line with last year's 93%, it has increased its annual traffic target in the current financial year by 1 million passengers to 117 million (this is 10% year-on-year growth) without changing its fleet plan. This implies a modest load factor gain over the full year.

Ryanair is still developing its digital and customer loyalty strategies, but expects to increase its ability to grow ancillary revenue by using its 'My Ryanair' customer database. Further details are planned to be included with Ryanair's 1H2017 announcement.

Ryanair's operating costs grew by only 1% in 1Q2017, in spite of double-digit traffic growth. Fuel costs fell by 7% and ex fuel costs grew by 7%. Ryanair's preferred definition of unit cost is based on cost per passenger (rather than the more commonly used metrics – cost per seat or cost per ASK).

Ryanair reiterated its FY2017 guidance: it still expects net profit for the year to Mar-2017 in the range EUR1,375 million to EUR1,245 million, an increase of 12% year-on-year at the midpoint. This provided a more positive note for the European airline sector after the profit warnings in recent weeks from IAG, Lufthansa and easyJet.

It certainly seems to suggest that, easyJet aside, the way through the current soft demand environment is being negotiated better by Europe's low cost airlines. Ryanair's results for the Apr-Jun quarter were the fourth to be reported by a listed European LCC, following Norwegian, Wizz Air and easyJet.

Three of the four - Norwegian, Wizz Air and Ryanair - reported improved profits and revenues, while only easyJet suffered a drop in pre-tax profit and revenue. It seems that easyJet is struggling the most in the current weak unit revenue environment, since its unit cost is not falling sufficiently to offset lower pricing.

Ryanair has lowest cost per passenger in Europe

Among these four LCCs Ryanair had the highest load factor, the lowest revenue per passenger and cost per passenger and the highest profit margin in the Apr-Jun quarter of 2016. Its operating margin of 18.2% compared with 12.0% for Wizz Air, 8.2% for Norwegian and 4.7% for easyJet (this is based on easyJet's pre-tax profit, but this is typically very close to its operating profit).

Although the legacy airlines have not yet reported for the quarter, these figures reconfirm Ryanair's position as the European airline with the lowest cost per passenger and the highest operating margin.

Ryanair's plans for a slowdown: step up the growth

Ryanair's unchanged profit guidance for FY2017 comes with the caveat that "post Brexit there are significant risks to the downside during the remainder of the year". It says that there is little visibility over winter fares, but it has retained its guidance of a decline of 10% to 12% in 2H, while cautioning that any movement in these numbers is more likely to be on the downside.

Moreover, when questioned about Ryanair's flexibility over its growth plans if market conditions deteriorated significantly further, CEO Michael O'Leary said that the airline would step up its growth, rather than cut back.

Speaking to analysts on a conference call to discuss the 1Q2017 results, Mr O'Leary stated that other airlines could not compete on price or service with Ryanair.

Although Ryanair reiterated its FY2017 profit guidance, Mr O'Leary is more than prepared for signs of a market slowdown or recession.

Indeed, in previous downturns, Ryanair has pursued an aggressive growth strategy, taking advantage of its low cost base to drop fares and to take market share from shrinking competitors. Mr O'Leary seems to relish the prospect of another downturn.