Ryanair achieved another strong increase in net profit in FY2016, following up on FY2015's 66% growth with a 43% gain. Passenger growth accelerated to 18% – its highest rate for seven years, helped in no small measure by a second successive 5ppt gain in load factor, taking it to 93%.

This was achieved with only a 1% fall in average fares, demonstrating the success of the customer service and network improvements that Ryanair has introduced over the past two years under its 'Always Getting Better' programme. Overall, Ryanair managed the rare combination of an increase in revenue per seat and a fall in cost per seat (although the latter owed much to lower fuel prices). This gave it its highest operating margin since FY2005.

Looking into FY2017, Ryanair expects profit growth to slow down, but at a figure around 13% it still aims for a double-digit rate. Moreover, it is likely to retain its position as the airline with Europe's highest operating margin.

However, this included a EUR318 million gain on the sale of Ryanair's holding in Aer Lingus to IAG. Excluding this one-off item, the underlying net profit was up 43% to EUR1,242 million – better than Ryanair's guidance range of EUR1,175 million to EUR1,225 million.

Ryanair's operating margin gained 3.9ppts to 22.3%; again, the highest in Europe and making it the only European airline to report an operating margin in excess of 20% in 2015 (or nearest financial year). 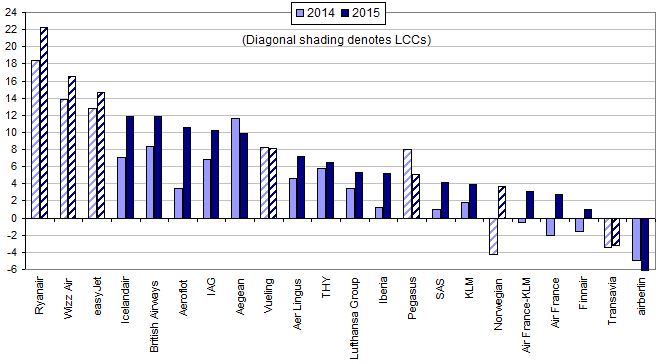 Note: calendar years except Ryanair (financial years to Mar-2015 and Mar-2016); Wizz Air (2014 is year to Mar-15, but 2015 is 12M to Dec-15); easyJet (years to Sep-14 and Sep-15; SAS (years to Oct-13 and Oct-14)
Operating margin based on operating profit before exceptional items and before equity investments
Source: CAPA - Centre for Aviation, airline company reports

Ryanair's revenue, operating profit and pre-exceptional net profit were all the highest figures in its history. Since FY2014, which was the last time that it suffered a fall in profits, its revenue has increased by 30% and both profit measures have more than doubled (operating profit up by a multiple of 2.2 times, and pre-exceptional net profit up 2.4 times).

One of the strongest airline balance sheets: cash held "frightens the competition"

Ryanair's balance sheet continues to look very impressive, even though its gross cash balance at the end of FY2016 actually fell by 10% to EUR4,335 million. Nevertheless, this still represented eight months of revenue (reduced from 10 months a year earlier). Moreover, this cash level was after Ryanair had distributed EUR1.1 billion to shareholders in FY2016 (EUR700 million share buy-back and EUR398 million proceeds from the sale of the Aer Lingus stake).

After subtracting its gross debt balance, its net cash position was EUR312 million at the end of FY2016 (compared with EUR364 million a year earlier).

Ryanair prefers to give surplus cash back to its shareholders in the form of share buy-backs as and when the balance is sufficiently high, rather than through regular dividends. In this respect it differs from other leading European airlines, such as easyJet, IAG and the Lufthansa Group, all of whom are now paying regular dividends.

Ryanair's passenger numbers increased by 17.5% to 106.4 million in FY2016. This was Ryanair's second successive year of double-digit passenger growth and acceleration from the 10.9% increase in FY2015.

After many years of strong double-digit growth, its passenger growth rate had slowed to single-digit rates in the years FY2011 to FY2014, prompting criticism that there were no longer sufficient opportunities. 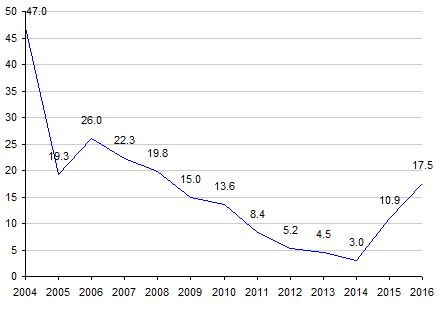 A significant contributor to Ryanair's passenger growth over the past two years has been an increase in load factor. In FY2016, its load factor gained 5ppts to 93%, after already gaining 5ppts the year before. Ryanair does not report seat numbers, but from the passenger numbers and load factor data it can be calculated that seat capacity grew by 11.6% in FY2016.

This 10ppt load factor increase over two years highlights the positive reception in the market for Ryanair's 'Always Getting Better' initiative, which has transformed its product and improved customer service. In FY2016 it achieved load factors in excess of 90% every month, apart from Jan-2016 (when it was 88%, an 5ppt improvement year-on-year).

Further significant load factor improvements will now be less likely. In the first month of FY2017, Ryanair's load factor gained 2ppts to 93%, but the company expects the full-year load factor to be similar to last year's. 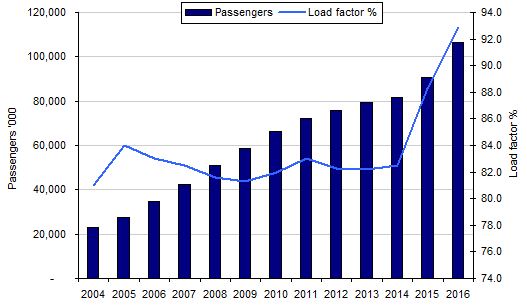 Ryanair's acceleration in its passenger growth rates over the past two years has led to some important market share gains. Comparing market share data for intra-Europe seats by country in its FY2016 presentation with its FY2014 presentation highlights this.

According to the data presented by Ryanair its market share in the UK, the largest market for intra-European seats, has increased from 13% two years ago to 18% and its rank has moved up from third to second. It has overtaken British Airways, but is still behind easyJet in the UK.

In France Ryanair is still ranked number three, behind Air France-KLM and easyJet, with a share of 6%. In Portugal its share has grown from 13% to 20%, but its ranking has slipped from first to second.

CEO Mr O'Leary: "…we do not target easyJet…"

The Ryanair CEO, Michael O’Leary, has said that he expects to overtake easyJet soon in the UK, where Ryanair is second on seats to/from European destinations: “As we open up the new base in Belfast, we’re adding more aircraft this winter in Glasgow, Edinburgh, Manchester and Stansted continues to grow strongly, we should overtake them by the end of this year. […] I don’t get too hung up on whether we overtake them or not. Its only a question of time, when we’ll overtake them”.

Nevertheless, Mr O'Leary told analysts on the FY2016 conference call that Ryanair did not target easyJet or any other airline. Ryanair's growth was based on its low costs, which enabled low fares and drove volume growth, he said. He added that a number of other easyJet base airports were now negotiating with Ryanair. Ryanair's significantly lower unit cost and fares are likely to present a growing challenge to easyJet.

Certainly, easyJet has suffered weak unit revenue for longer. This brought easyJet into loss for the Jan-Apr quarter, whereas Ryanair achieved a profit for every quarter of its financial year.

Ryanair's passenger target for FY2024 is 180 million passengers, compared with a target of 160 million set a year ago. It has also increased its FY2024 fleet target from 520 to 546 aircraft.

But the unit revenue outlook is weakening

Ryanair has cautioned that pricing will be softer, and its guidance is that average fares will fall by 7% in FY2017 (1H -5% to -7% and 2H -10% to -12%). This may partly be Ryanair's usual overly cautious approach to guidance (particularly into 2H, where visibility is lower), but there is little doubt that European airlines are operating in a soft pricing environment, with low fuel prices and the delayed effect on airline costs from hedging programmes contributing to greater capacity growth this year.

Ancillary revenues may be expected to grow more closely in line with passenger numbers, helped by Ryanair's digital initiatives, including its new website and mobile app, combined with the increased uptake of reserved seating, priority boarding, fast track security and new initiatives currently under development by Ryanair Labs. Total revenue per seat may be expected to fall at a slightly lesser rate than the decline in average fares.

This guidance suggests a fall in total cost per seat of around 8%, which should more than offset the expected fall in revenue per seat. Mr O'Leary told analysts that he was confident Ryanair would maintain its position as Europe's lowest CASK airline, in spite of Wizz Air's proximity to Ryanair's level of CASK and its increasing mix of A321s compared with A320s. Mr O'Leary argued that Wizz's Airbus aircraft were more expensive than Ryanair's 737-800s and 737MAX aircraft. He added that the MAX would bring further fuel efficiency gains and also increase the average seat count of Ryanair's fleet from FY2020, helping to cut unit cost. 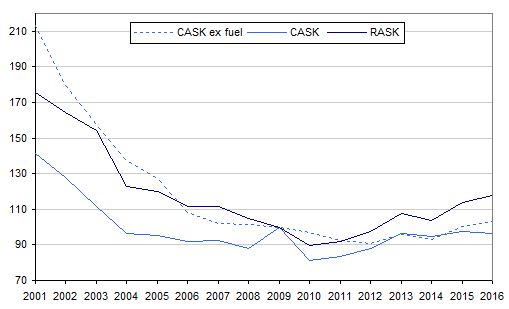 Ryanair's net profit guidance range is EUR1,375 million to EUR1,425 million, which is a 13% year-on-year increase at the midpoint. This growth in profit is considerably slower than the 66% growth in FY2015 and 43% in FY2016, but Ryanair's track record of cautious guidance suggests that it could be increased as the year progresses.

Moreover, it also implies a further operating margin improvement of 1-2ppts, further consolidating Ryanair's position as Europe's most profitable airline. It is also Europe's largest airline by seats and passenger numbers and has the lowest unit cost.

The airline's passenger service improvements have reinvigorated the business model over the past two years and returned it to levels of profitability not seen for a decade.

It is now continuing to develop its digital initiatives and is also close to adding elements to its business model – such as a connecting ticket and interlining with long haul operators.

See related report: Ryanair transfer traffic & interlining; closing the gap with FSCs on product, but not on costs

Ryanair looks set to keep its position as Europe's most profitable airline for a while longer.