Ryanair and Wizz Air continue to lead European aviation's recovery, but other leading groups are becoming more bullish. In the week commencing 21-Feb-2022 Ryanair had 104% of its 2019 seats. It is the only European top 10 airline group by seats that is ahead of 2019 capacity. Wizz Air, on 83%, had the second highest percentage. Europe as a whole is on 69%; the top 10 groups are collectively at 72%.

President Putin's disastrous invasion of Ukraine will not help in any regrowth. And the cost impact of fuel prices with oil now over USD100 per barrel is also unwelcome.

In the week commencing 21-Feb-2022 total European seat capacity is scheduled to be 19.2 million, according to OAG schedules and CAPA seat configurations.

Europe is still at the bottom of the ranking of regions measured by seats as a percentage of 2019 levels this week, but is closing in on Asia Pacific.

Latin America, Europe, Asia Pacific and Africa have taken upward steps in the trend this week, whereas North America and the Middle East are broadly flat on last week. 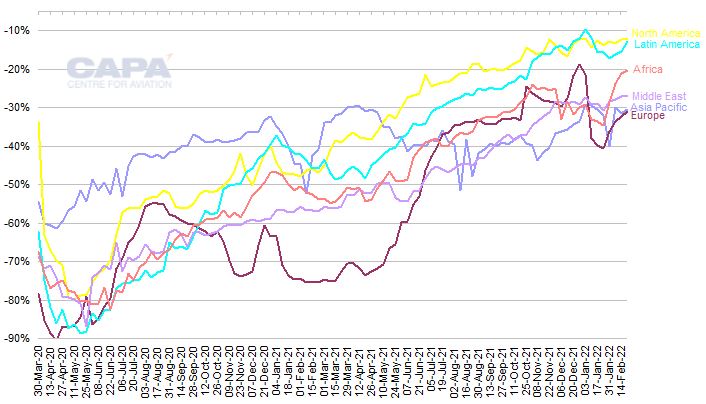 With only one month remaining in the quarter, schedules for 1Q2022 currently project seats at 75.2% of 1Q2019 levels. This is down only slightly from 75.5% projected a week ago.

Ryanair is Europe's number one airline group by seats…

However, this disguises a wide range of percentages of 2019 capacity among Europe's leading airline groups.

The composition of the top 10 groups by seats in the week of 21-Feb-2022 shows one change of airline from the equivalent week of 2019 – namely that Norwegian has been replaced by Pegasus Airlines – but the order of the top 10 has also changed.

Ryanair, which was number three by seats in the week of 18-Feb-2019, is now at number one.

This reflects the fact that the ultra-LCC is now operating 104% of the capacity that it operated three years ago. Ryanair is the only top 10 group that is now above 2019 capacity levels.

Fellow ultra-LCC Wizz Air Group is operating 83% of 2019 weekly seat numbers – the second highest percentage in the top 10 – and has raised its capacity ranking from 10 to eight.

Air France-KLM, on 82%, has moved up from fourth to second. Turkish Airlines, also on 82%, remains sixth. Pegasus Airlines, on 90%, has moved from 11th to ninth.

Only three of the top 10 are below the European average of 69%.

The lowest percentage of 2019 capacity is with Lufthansa Group, at 48%. This has taken the group down from first to fourth place.

Looking ahead to the peak summer period: Europe's total capacity in the week of 25-Jul-2022 is currently projected to be 93% of seat numbers of the equivalent week of 2019, similar to the 92% projected for 2Q2022. This is based on schedules filed with OAG (and CAPA seat configuration data) as at 21-Feb-2022.

Among this top 10, all but two are currently projected to operate more than the European average of 93% of 2019 weekly seat numbers.

Six are projected at more than 100%, led by Wizz Air Group on 159%. This takes it from eighth to seventh in the capacity ranking.

Wizz Air and Ryanair continue to lead the recovery in Europe

Ryanair Group CEO Michael O'Leary has said that he expects the group to recover its pre-pandemic passenger traffic levels "by March or April this year" (Reuters, 16-Feb-2022).

He has also said that he expects average airfares during summer 2022 travel to be significantly higher than summer 2019 levels.

Wizz Air and Ryanair plan the highest percentage of 2019 capacity levels among Europe's leading groups in summer 2022. The two ultra-LCCs have consistently lead Europe's capacity recovery from the pandemic and are gaining market share as a result.

Nevertheless, several other leading groups are now also planning to move above 2019 capacity in the summer.

If Mr O'Leary is right about airfares, Wizz Air and Ryanair will still have significantly lower prices than other leading competitors and should be better able to attract traffic to fill their capacity. But the current near-record fuel prices will make profitability that much more challenging.

This should also mean that Wizz Air and Ryanair lead the profitability recovery.