Carpatair has added its first Boeing 737 to its fleet of regional aircraft, allowing the airline to develop longer range routes and to reduce unit costs particularly on routes where it competes head-to-head with Wizz Air. By deploying higher capacity aircraft, Carpatair hopes to boost its competitiveness and adapt to the changing environment with LCCs increasingly expanding their footprint into regional markets.

Carpatair commenced operations in 1999 providing regional connectivity from Timişoara Traian Vuia International Airport to other cities in Romania as well as a number of international airports. The airline built its operations on the traditional hub-and-spoke model using a fleet of Saab 2000 and Fokker 70/Fokker 100 aircraft. Carpatair has developed step by step by remaining truthful to its niche approach and growing its market share versus TAROM, but the mushrooming LCCs are now forcing the carrier to rethink its model and branch out with longer range routes and higher capacity aircraft.

It is thus not coincidental that Carpatair’s first 737-300 is operating on two routes – Timişoara-Milan Bergama and Timişoara-Rome Fiumicino – where it faces direct competition from Wizz Air, Central and Eastern Europe’s largest LCC. The airline’s 737 is fitted with 148 seats, which is more than the seat density of its largest regional aircraft (the Fokker 100s are configured with 105 seats) but it is below the capacity of Wizz Air’s  A320/A321 aircraft which have 180 seats. Carpatair’s current fleet consists of a single 737, six Saab 2000s, three Fokker 100s and three Fokker 70s. 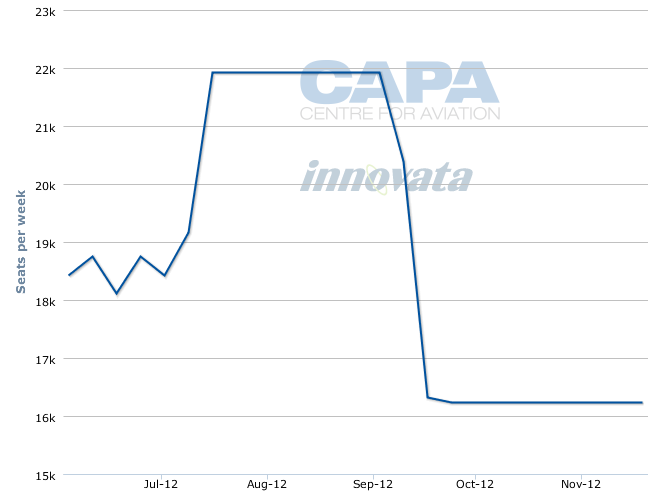 The large majority of Carpatair’s operations are international, across Western and Eastern Europe where it serves 14 destinations while its domestic network spans seven airports. 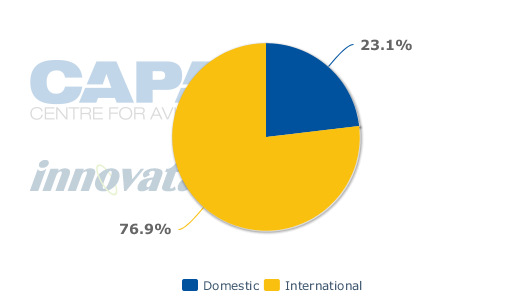 Carpatair commenced operations as Veg Air but some months later rebranded to Carpatair reflecting its heritage as the home carrier of Transylvania, a historic region in the central part of Romania bounded on the east and south by the Carpathian mountain range. The airline was founded by its current president and CEO Nicolae Petrov.

The carrier’s main base is Timişoara where it hub-and-spoke operations. The first wave is inbound from airports in Romania, Moldova and Ukraine followed by an outbound wave to mostly western European destinations in Italy and Germany. The first late afternoon wave is inbound from the western European cities to Timisoara followed by a last outbound wave to the carrier’s domestic and eastern destinations.

Carpatair’s main international market is Western Europe where almost two-thirds of its international capacity is deployed. Four of its top 10 international routes are to Italy and three to Germany. However, its largest route in terms of weekly seats is between Timişoara and its secondary base at Chisinau in Moldova. 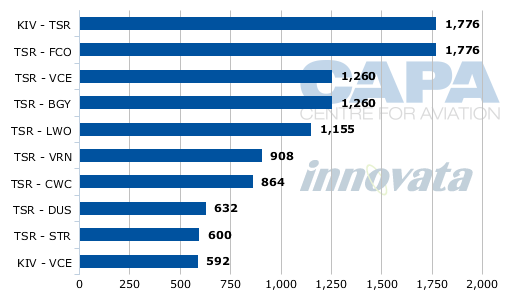 Carpatair has minimal expansion plans by way of new routes during the summer 2012, but it is opening a base in Chisinau with direct flights to Venice, Rome Fiumicino and Milan Bergamo. The launch of the Moldavian base was initially scheduled for 26-Mar-2012, but there was a delay in signing the Common Aviation Area Agreement between the Republic of Moldova and the European Union. The agreement was initialed in Oct-2011 and calls for the gradual liberalisation of the air transport market between the EU and Moldova, as well as the integration of the EU’s aviation safety and security rules by the Republic of Moldova. The agreement removed nationality restrictions in the bilateral air services agreements between EU Member States and the Republic of Moldova, thereby allowing any EU airline to operate flights between Moldova and any EU Member State where it is established and where a bilateral agreement with Moldova exists and traffic rights are available.

Schedules for Carpatair's new base in Chisinau in summer 2012 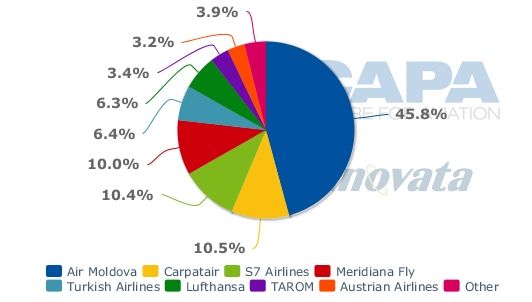 Carpatair is making use of this new “common aviation area” agreement to strengthen its position on the Moldova-Italy market – it now has a 19% share of seat capacity on direct flights between Moldova and Italy, with Air Moldova holding a 40% share and Meridiana Fly 41%. Before the opening of the carrier’s base in Chisinau, its traffic on the Moldova-Italy market was routed over Timişoara. Chisinau is the busiest airport in Moldova and the hub airport for Air Moldova. It is also the base of Moldavian Airlines, which was set up in 1994 by Mr Petrov. 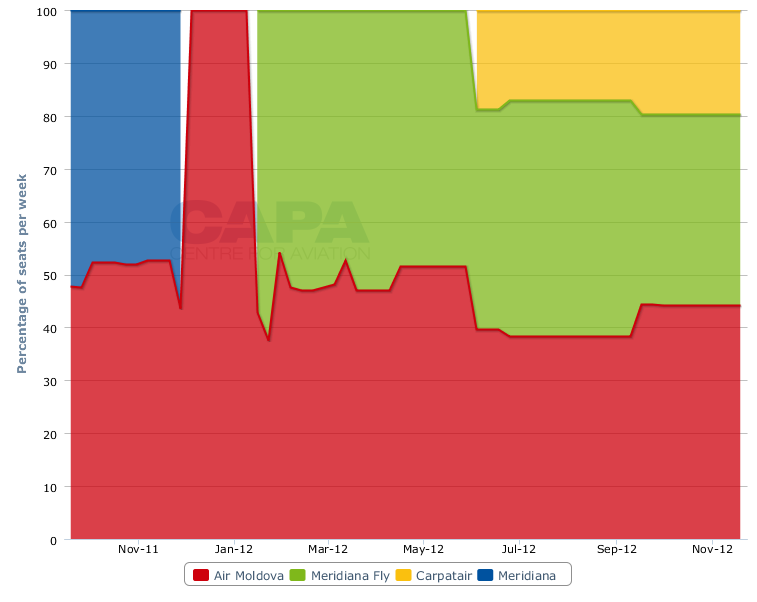 Carpatair and Moldavian Airlines are managed as a group

Moldavian Airlines was the first private airline of the Republic of Moldova, operating scheduled flights between Chisinau and Moscow Domodedovo, which at that time was known for its Siberia-bound flights.

The small airline initially used Soviet built aircraft such as a Yakovlev Yak-42 and a Tupolev Tu-134, but in 1997 started introducing Western built regional aircraft. It currently operates a small fleet of one Saab 2000 and two Fokker 100s. Moldavian Airlines operates just two scheduled routes, from Chisinau to Budapest in Hungary and to Timisoara. It has charter flights to different destinations such as Antalya, Bucharest, Debrecen, and Lisbon.

Moldavian Airlines became a joint Swiss-Moldovan company in Nov-1999 and this company created Carpatair. The airlines are managed as a group.

The Romanian carrier’s main base is at Timişoara Traian Vuia International Airport where it is still the dominant carrier with a 46% share of weekly seat capacity. The national carrier TAROM holds only 15% of weekly seat capacity, but Wizz Air is biting into Carpatair’s share. Five airlines currently operate from Timisoara offering 29 direct non-stop passenger destinations of which six are domestic, according to Innovata. 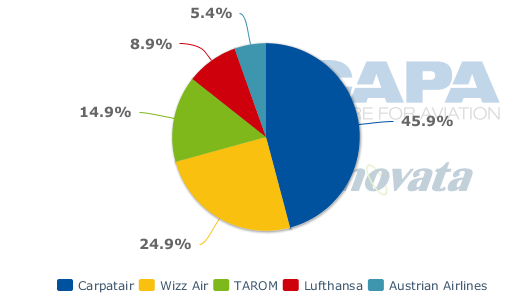 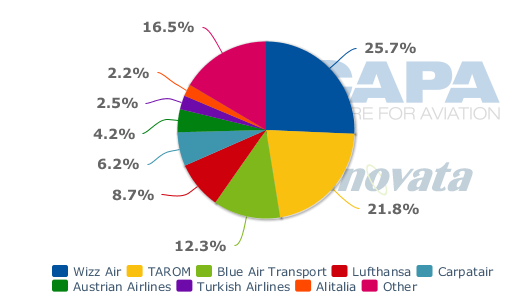 Carpatair found a niche market and has prospered developing thin regional routes, but LCCs are unstoppable and are starting to bite into its market. The carrier has realised this and is venturing with larger capacity aircraft aiming to reduce unit cost. It is also venturing with a LCC positioning. Carpatair is a full service airline, and on several routes offers a full business class product despite its regional network and the short stage length of most of its flights, but it has started to sell the new flights to Italy from the Moldavian base as “low cost”.