Rolls-Royce, a key supplier of A320-family engines, has criticised Airbus' potential re-engine plan for the A320, with the company's VP Strategic Marketing, Robert Nutall, stating: "If you look at the benefits of re-engining and all the costs, there's no net benefit. We can't make the business case work."

Mr Nutall added that the manufacturer should instead wait longer and develop an entirely new aircraft with greater efficiency improvements. Airbus could announce plans as soon as next month to offer new, more efficient engines on its A320 equipment, and cited a lack of new technology for proposing new engines instead of new aircraft. Meanwhile, General Electric and Pratt & Whitney have stated they would be able to offer new engines for the A320.

Shares in Rolls-Royce were marginally weaker yesterday (-0.1%) while shares in Pratt & Whitney slipped 0.2%. Shares in EADS, meanwhile, was up marginally (0.2%) while Boeing shares remained neutral.

In related news, Honeywell’s HTF7500E engine, which will power Embraer’s new Legacy 450 and Legacy 500 series aircraft, has completed its first engine to test (FETT). Honeywell Aerospace Propulsion VP, Ron Rich, stated that in phase one of testing, the HTF7500E had completed nearly 60 hours of testing, including 79 starts, with more than 20 hours of flight test time on the B757 test bed.

In a note to investors, JP Morgan predicted Honeywell would see "fundamental acceleration" throughout 2011 on aerospace and ACS even as it struggles with a pension headwind. By 2012, the pension headwind should subside, providing even larger profits, according to JP Morgan. "2012 is a big reason to own Honeywell, and we would rather be early,” said JP Morgan. Shares in Honeywell were up 0.2% yesterday, following a 2.9% gain the previous day. 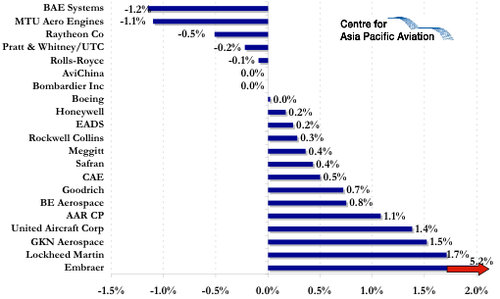 The UAC subsidiary will reportedly own a controlling stake in the JV. The company will construct wing components for commercial jets manufactured by Sukhoi, Boeing and Airbus and well as for the Russian military. Initial production, scheduled to commence in 1Q2013, will be for Sukhoi's SuperJet 100 and MS-21 aircraft.

Among supplier and leasing stocks, shares in JBT Corp gained 4.8% yesterday, while Multiplus, TravelSky Technology and Expedia all witnessed share price reductions in excess of 2%. 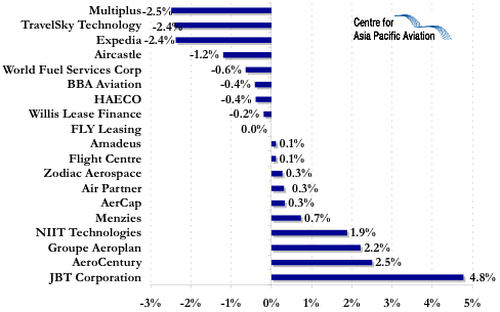