The only blot on the landscape was that ex fuel CASK increased a little in 2Q2013 as labour costs grew steeply, but the 1H2013 performance of both items was more favourable and so this may simply be a temporary issue.

Pegasus’ mission statement says: “We aim to combine the network benefits of full-service carriers, and the price benefits of LCCs, to provide inexpensive travel, on-time performance and new planes.” It does not mention profits, but, if it can continue to fulfil these aims, it seems that profit growth will also continue.

Pegasus Airlines reported a 42% increase in its 2Q2013 net profit versus 2Q2012, with revenues up 16%. The underlying performance is better reflected in the results of the core Pegasus operation, which excludes the charter activities of airberlin Turkey (which ceased in 1Q2013). This core business saw revenue growth of 30% and more than tripled its operating profit to TRY97 million.

For the first half of 2013, the core Pegasus operation grew revenues by 35% and turned an operating loss of TRY40 million in 1H2012 into an operating profit of TRY98 million. Pegasus’ cash balance increased over the half-year from TRY210 million at the end of 2012 to TRY858 million, reflecting IPO proceeds and strong operating cash flow.

Pegasus added 17% more seats year on year in 2Q2013 and carried 19% more passengers, continuing the growth seen in 1Q2013. Growth was fastest on the international network, where passenger numbers increased by 21%. 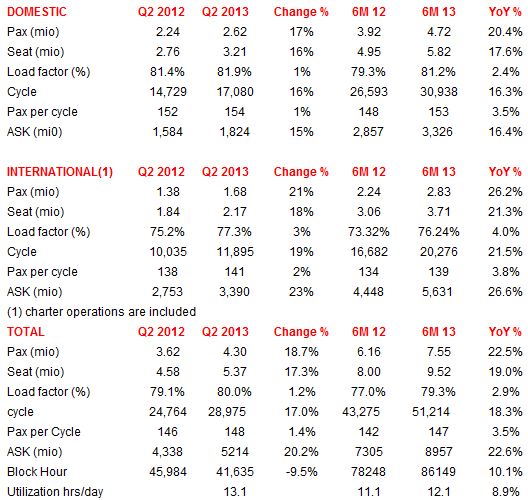 Pegasus has been growing rapidly for a number of years. Its scheduled domestic passenger numbers grew at a compound average growth rate of 36% pa from 2008 to 2012 and its scheduled international passenger growth was 43% over this period.

These figures compare with Turkish Airlines’ rates of 10% and 19% respectively. Pegasus’ overall 2008-2012 CAGR of 38% pa for scheduled passengers ranks among the fastest growing airlines in the world.

Group revenues grew by 16% to reach TRY605 million, but the like-for-like growth of the core Pegasus operation revenues was 30%. This was faster than the growth in ASKs and RASK was up by 8%. The biggest source of revenues, scheduled flights, generated revenue growth of 27%, while ancillary revenues outperformed, growing at almost 35%.

Ancillary revenues accounted for 13% of revenues, up from 12% in the full year 2012, but its ancillary revenues per passenger lag the levels achieved by many other LCCs. This is one of Pegasus’ focus areas for further growth and it has a target of EUR10-12 per passenger within the next three years, compared with a little more than EUR7 in 2012. 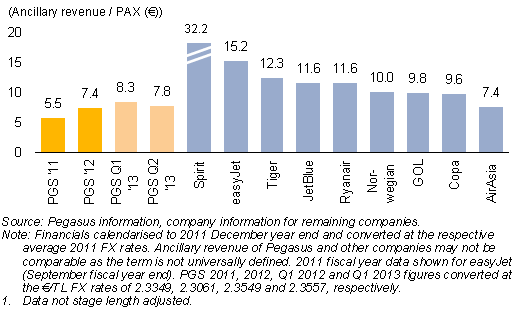 Group operating costs increased by 5% year on year in 2Q2013, but the cessation of the airberlin Turkey operation distorts the comparison. On a like-for-like basis, core Pegasus operation costs increased by 17%, less then the growth in ASKs and revenues. Cost per ASK fell by 2.8%, although this was assisted significantly by lower fuel prices. The fuel bill grew by only 11%, much lower than the 20% growth in ASKs, and CASK ex fuel increased by 1.2%. This contrasts with 1Q2013, when CASK ex fuel fell by 11.5%. For the half year, it was down by 4.45

Labour costs grew by 41% in 2Q2012 and this accounts for the increase in ex fuel CASK as all other costs grew more slowly than capacity. For the half-year, labour costs grew by 25%, only a little more than the 23% growth in ASKs, so this sharp increase in 2Q labour costs may just reflect timing differences between employee costs and future capacity growth. Certainly, it will be important to ensure that Pegasus’ good levels of labour productivity do not deteriorate.

Pegasus operated an average of 41.6 aircraft in 2Q2013, compared with 37.4 in the year 2012. Improvements in aircraft utilisation and load factor have allowed Pegasus to generate passenger traffic growth at a faster rate than fleet growth. At the end of 2012, its fleet was all Boeing, with 38 737-800s and two 737-400s 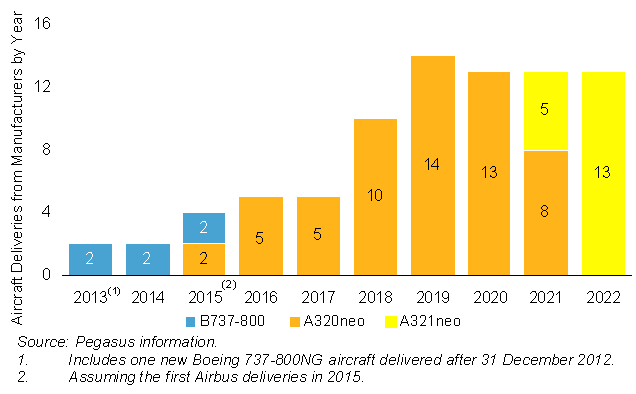 Pegasus fleet plan has considerable flexibility in terms of it possible growth path. In its upside case, it could grow to 126 aircraft by 2022, while its downside case would see a total of 75 aircraft in 2022.

The number of destinations served by Pegasus is also growing rapidly. By the end of 2013, it expects to add five international routes and six domestic routes to its 2012 total. This will mean that is network will have 42 international destinations and 29 domestic destinations, up considerably from 24 and 18 respectively in 2010. Its main hub is at Istanbul Sabiha Gokcen, while it also has additional hubs at Izmir, Antalya and Adana.

Looking beyond 2013, Pegasus plans to add to its network and to increase frequencies on existing routes, thereby stimulating demand. The key to this will be maintaining a cost and pricing advantage over rivals.

The focus for international expansion will be on markets where trips per capita and LCC penetration remain low. Regions such as Eastern Europe, the Middle East and North Africa meet these criteria. Pegasus is also considering new destinations in Western Europe, although LCC penetration is already relatively high in the region. 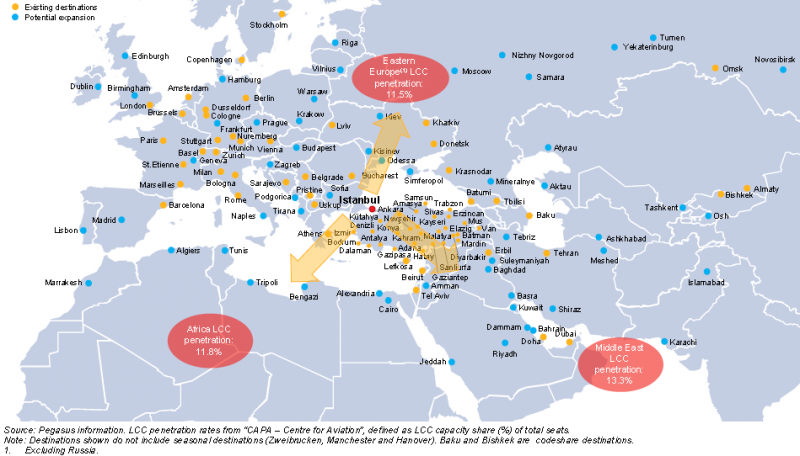 Efficient operations have been a key to success

In addition to its low fares, enabled by its low cost base, Pegasus is keen to stress the efficiency of its operations.

1) 2009 and 2010 data impacted by the opening of the new terminal at SAW
Source: Pegasus Airlines

1) Aircraft utilisation in block hours per day (table above). Turns per day are shown in the bar chart
Source: Pegasus Airlines

Pegasus’ aircraft orders are a higher percentage of its existing fleet than for any other significant carrier based in Turkey.

Its fleet is the second largest in Turkey, behind Turkish Airlines (THY), but its orders represent 184% of its fleet, compared with 90% for THY. At present, none of atlasjet, SunExpress, or Onurair has any aircraft on order. Pegasus’ low costs, network scale and aggressive growth plans should help to keep it ahead of these smaller Turkish competitors. 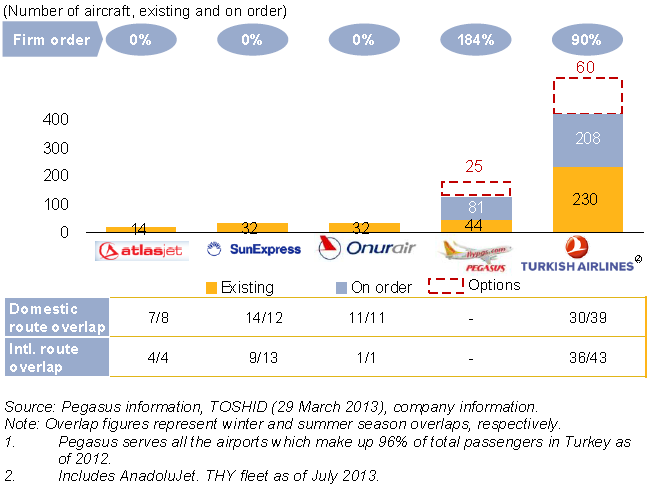 For 2013, Pegasus targets passenger growth of around 15%. Beyond that, its plans to add ASK capacity at a rate of 12% to 16% pa over the next three years. It sees utilisation rates for 2013 at a similar level to 2012, but increasing in the future as more night flights are introduced and the network grows. Pegasus expects load factors to continue to grow and targets a level of more than 80% in the short to mid term.

In terms of costs, it anticipates stable CASK in the near term, but its Continuous Improvement Team (CIT) is pursuing further cost reduction initiatives and it plans to reduce CASK beyond the near term.

Pegasus management estimates of the achievements of its CIT team

Pegasus' CASK level puts it in the ultra-LCC bracket among European airlines, but its business model includes some features not typically associated with the purist LCC approach. For example, although it has a point to point focus, its Sabiha Gokcen hub also offers network feed to increase volume for international routes and reduce seasonality for domestic routes. In addition, it embraces features that are now becoming more common among LCCs, but are more traditionally associated with FSC, such as seat selection, the use of GDS and code sharing.

In CAPA's previous report on Pegasus (9-May-2013), we compared its unit costs with those of other European carriers and concluded that it ranks alongside Ryanair and Wizz Air as a truly low cost carrier. We also noted the following:

“Importantly, we estimate that Pegasus has unit costs that are 38% below those of Turkish Airlines on short/medium-haul. This cost advantage, built on an efficient labour force, coupled with Pegasus’ position in the fast-growing Turkish and Central/Eastern European markets, give it a strong position for future earnings growth.”

The evidence of Pegasus’ 2Q2013 results is that is building on that position and delivering that growth.