Pegasus Airlines: a true LCC growing traffic and earnings at a winged gallop

Shares in Turkish LCC Pegasus Airlines commenced trading on 26-Apr-2013 after an IPO that raised TRY649 million (EUR277 million). The IPO prospectus reveals that Pegasus is not only Europe’s second most profitable airline (based on 2012 operating margin), but also one of its fastest growing (2008-2013 CAGR in passenger numbers of 33% p.a.). Its unit costs (CASK) place it with Wizz Air and Ryanair as one of Europe’s three truly low-cost carriers.

Although Turkey was not immune to recession in 2009, air traffic continued to grow and Pegasus is still on a structural volume growth path not led by the economic cycle. Such a path does not guarantee earnings growth and Pegasus made a loss in 2011. Nevertheless, its low costs and strong presence in fast-growing Turkey and Central/Eastern Europe, should allow it to grow earnings in the future. Indeed, its breakeven operating result for the core business for the traditionally loss-making first quarter (reported 09-May-2013), with RASK up sharply and CASK falling, augurs well for FY2013.

*Operating profit before other operating income (which mainly consists of gains on sale and lease-back of aircraft)
Source: Pegasus Airlines

Pegasus was Europe’s second most profitable airline in 2012

Pegasus completed its IPO in Apr-2013 and the English version of the IPO prospectus has recently been made available on the company’s website. It reveals that, in 2012, Pegasus increased its net result to TRY126 million (EUR55 million), turning around a loss of TRY14 million (EUR6 million) in 2011. The group’s operating profit grew by almost TRY194 million to reach TRY188 million (EUR82 million), with an operating margin of 9.8%. Revenues grew by 29% to reach TRY1,920 million (EUR833 million), driven by ASK growth of 10% and RASK growth of 11%.

Excluding the airberlin Turkey operation (under which Pegasus group company IzAir operated split charter flights between Antalya and selected cities in Germany under the “airberlin Turkey” brand until this was recently suspended on the agreement of all parties), the operating result improved by TRY197 million to TRY198 million (EUR86 million) with a margin of 11.1%. Whichever version of its operating profit we use, Pegasus was Europe’s second most profitable airline in 2012 by operating margin.

Between 2010 and 2012, Pegasus’ revenues almost doubled, while group operating profit increased more than five-fold, although the middle year, 2011, saw losses. The 2011 result was negatively affected by the start of the airberlin Turkey operation, but the operating profit of the core Pegasus operation was only TRY1 million. 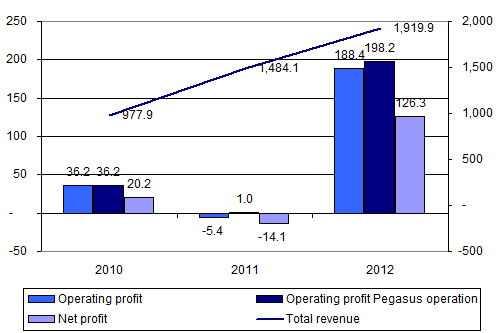 Turkey is one of Europe’s fastest growing aviation markets

Turkey is one of the fastest growing aviation markets in Europe, with compound average annual growth of 14% in total passenger numbers, 24% in domestic passenger numbers and 11% in international passengers from 2003 to 2012, according to figures from DHMI. This growth has been driven by relatively strong GDP growth (although Turkey was not immune to recession, seeing negative GDP growth in 2009 – when passenger growth nevertheless remained positive) and by the under-penetration of aviation in Turkey.

Moreover, Turkey is one of the world’s most popular destinations by arrivals and has enjoyed a high growth rate in both arrivals and departures (see chart below).

Pegasus is growing even faster than the Turkish market 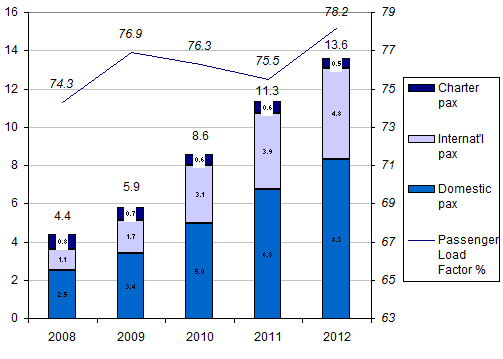 Strong traffic growth has continued into 1Q2012, which saw total passenger numbers up 28%, ASKs up 26% and load factor increase by 4.0ppts to 78.3%. Growth was faster on international routes. The airline says that its plan for 2013 is to grow passenger numbers by 15%, suggesting a slower rate over the remaining quarters. 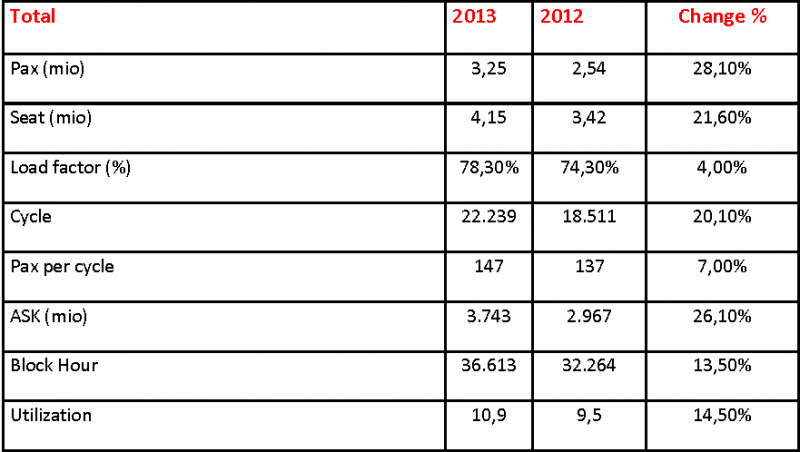 Compared with the typical European LCC, Pegasus has more capacity in the faster growing Central and Eastern Europe (not surprising given its location) and this has also helped to drive its growth. Innovata data for the week of 6-May-2013 show that it has 42% of its international seat capacity in Eastern/Central Europe and that it is the fourth ranked airline in seat capacity in Eastern/Central Europe (behind Turkish Airlines, Aeroflot and Ryanair.

Its future growth strategy will focus on destinations to the east, north and south of Turkey, in particular the Middle East, North Africa, Central/Eastern Europe and the CIS, in addition to domestic routes. New international routes for the summer 2013 schedule include Antalya to Pristina and Istanbul Sabiha Gökçen to Nuremberg, Barcelona, Doha and Athens. Pegasus is also increasing frequencies to Tel Aviv, Belgrade, Sarajevo, Skopje and Lviv. 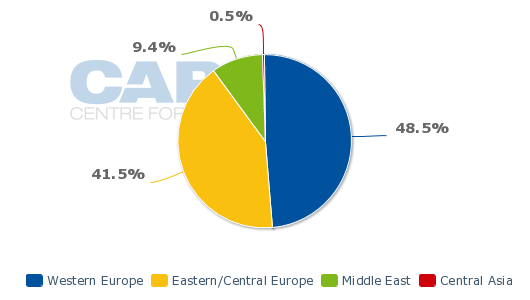 Pegasus’ principal hub is Istanbul’s Sabiha Gökçen Airport, from which it operates to most of its 70 destinations (29 domestic and 41 international), and additional hubs at Adana, Antalya and Izmir. It operates international routes from these hubs and from Ankara, Kayseri, Kanya, Bodrum and Dalaman. 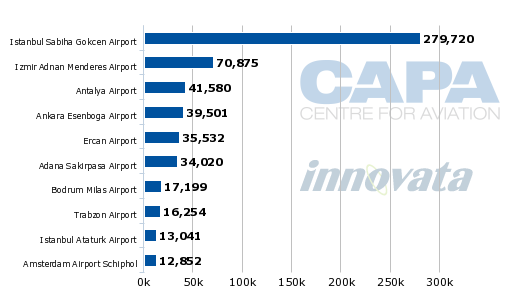 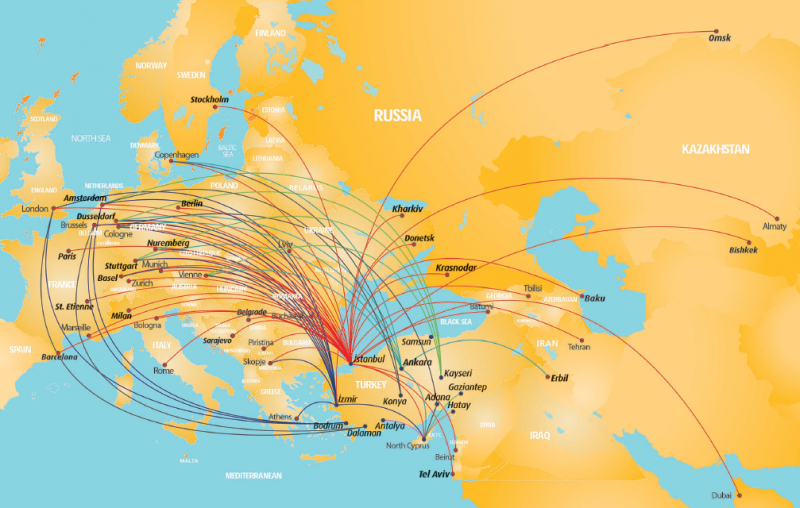 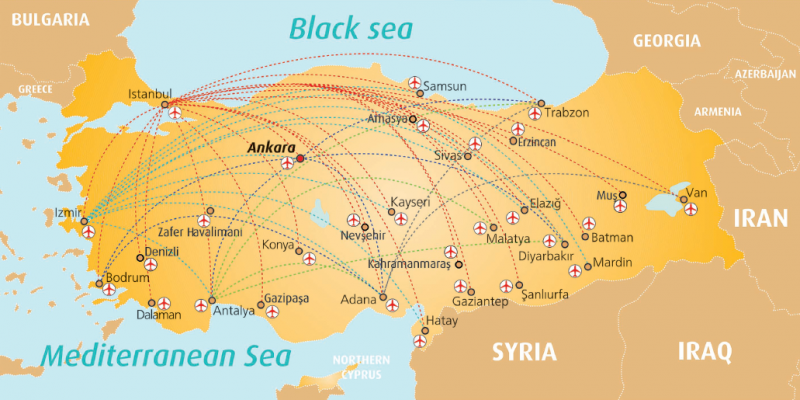 Pegasus’ Group revenue growth of 29% in 2012 was driven by 31% growth in domestic revenues and 58% growth in ancillary revenues. The core Pegasus operation saw revenue growth of 22%, while the airberlin Turkey operation’s revenues grew more than eight-fold to account for nearly 7% of group revenues. The strong growth in ancillaries took its share of group revenues to 12%, while its share of core Pegasus revenues was 12.8%, up from 9.9% in 2011. In spite of the growth, this remains below the approximately 20% of revenues achieved by Ryanair and easyJet and Pegasus has identified ancillaries as a focus for further growth.

Pegasus has low fares and a single class cabin, but, unlike the ‘purist’ LCC model practiced by the likes of Ryanair, it still sells around half of its tickets through travel agents, although this proportion is falling. Moreover, while its website is an increasingly important means of distribution, it is making growing use of the GDS channel. As direct sales channels grow, this should provide further cost savings. The carrier also operates a loyalty programme 'Pegasus Plus'.

Cost growth was less than revenue growth in 2012

Pegasus saw group operating costs grow by 16% in 2012. The core Pegasus operation’s costs grew by just under 9%, below capacity growth and considerably below revenue growth. The biggest cost item was jet fuel, 44% of the core operation’s costs in 2012, which increased by 15%. Personnel costs (12% of the total) grew by 22%. Although year end headcount was stable, average headcount (calculated from year end figures) was up almost 10% and employee costs per employee were also up 10%.

In spite of the increase in labour costs, which was 24% when converted into euros, Pegasus’ labour productivity is very competitive against other European carriers. We calculate its 2012 employee cost per employee to be just under EUR42,000, the second lowest in Europe (above only Wizz Air), reflecting the lower wage environment of countries in the eastern part of Europe. Labour costs are only 11% of revenues for Pegasus, ranking it fifth on this measure.

Pegasus’ ATK per employee ranks sixth among the 20 carriers we have analysed (just ahead of its local rival Turkish Airlines in seventh, but behind the five other LCCs), while it ranks third on employee costs per ATK (behind Wizz Air and Ryanair). This strong performance on labour cost productivity is not matched in terms of revenue productivity: its revenue per employee of almost EUR380,000 ranks 10th (but this beats Turkish Airlines in 12th place).

All-Boeing fleet to be joined by A320neo family from 2015

Operating a dual fleet may lead to some initial inefficiencies in terms of maintenance costs, crew training and rostering (but presumably Pegasus expects these to be offset by the lower fuel burn of the A320neo family and the undisclosed price it obtained for the aircraft).

1) Between 31-Dec-2012 and 19-Apr-2013 (date of IPO prospectus), Pegasus received delivery of one new 737-800NG and redelivered to the lessor one 737-800NG and one Boeing 737-400 operated under operating leases
Note: the above figures do not include aircraft used by the airberlin Turkey project from 01-Nov-2011
Source: Pegasus IPO prospectus

1) Pegasus has received the delivery of one of the two new 737-800NG to be delivered in 2013
2) If Pegasus exercises, either in part or in full, the option it has under the Airbus order for 25 additional aircraft, the deliveries of these aircraft will commence after 2022 unless earlier deliveries are agreed
Source: Pegasus IPO prospectus

The chart below shows the development of Pegasus’ unit revenues and unit costs from 2010 to 2012 (excluding the airberlin Turkey operation). What is striking is that RASK has grown by 35% over two years in spite of a 36% increase in ASKs. This suggests a good level of pricing power, perhaps because Pegasus’ fares are much lower than those of its competitors.

Its average revenue per passenger in 2012 was EUR57, half that of local rival Turkish Airlines on its short- and medium-haul network. This average revenue per passenger is also fractionally below Ryanair’s, making it the lowest for any European airline (although its average sector length is some 20% or more shorter than Ryanair’s). Its low fares stimulate demand and still allow unit revenue growth as the gap to competitor fares remains wide.

Pegasus’ unit costs (CASK) jumped by 26% in 2011, only partly due to fuel prices – ex fuel CASK was still up by 15%. This was exacerbated by the rise in the euro against the Turkish Lira, since a significant proportion of employee costs are paid in euros, and the growth in the fleet in 2011. The rise in CASK outstripped the RASK increase, leading to an operating result for the core Pegasus operation of only just above breakeven. However, both CASK and ex fuel CASK fell in 2012, while RASK continued to grow, leading to improved profits. 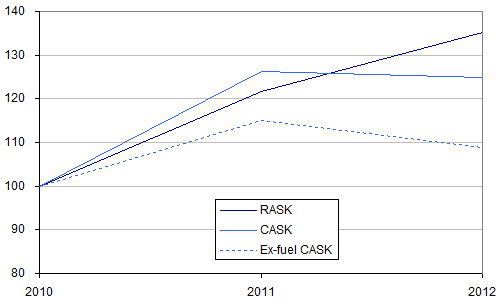 The chart below compares unit costs with average sector length for a number of European and other carriers. Placing Pegasus on this chart clearly demonstrates that it has a very low cost structure, with only Wizz Air and Ryanair having lower costs per available seat kilometre. Since its route structure is shorter, it can be expected to have a higher CASK. Its cost base is significantly lower than those of the other European LCCs Vueling, Norwegian and easyJet.

Importantly, we estimate that Pegasus has unit costs that are 38% below those of Turkish Airlines on short/medium-haul. This cost advantage, built on an efficient labour force, coupled with Pegasus’ position in the fast-growing Turkish and Central/Eastern European markets, give it a strong position for future earnings growth. 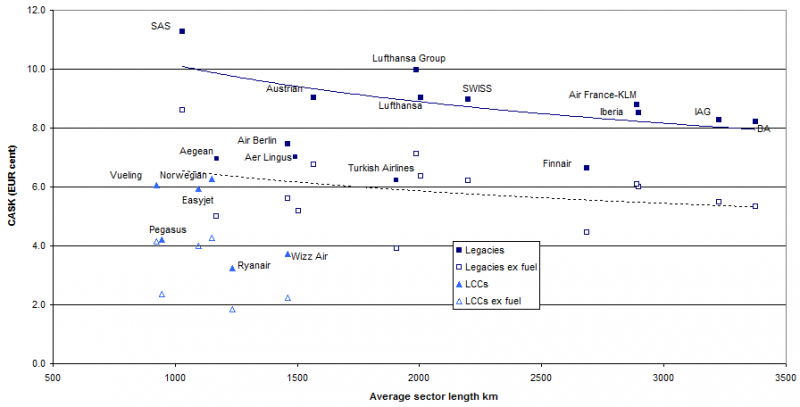