Paris Air Show Preview: Airbus and Boeing down, Embraer up as dust settles from IATA AGM

Aircraft deferrals, delays and cancellations were a key theme at the recent IATA AGM, putting downward pressure on the share prices of Boeing and EADS’ aircraft manufacturing unit Airbus. However, a bright side also emerged in the outlook for airframe manufacturers, with news that several carriers are presently in order negotiations, suggesting ordering in the second half of the year could be better than the dismal first half. While there are no suggestions that the Paris Air Show will see a repeat of the frenzied ordering of the past few years, several new orders are expected, including Qatar Airways and Etihad Airways, as the Gulf carriers continue their expansionist ways.

Boeing was down 0.9% yesterday, following news that India's Jet Airways could potentially defer deliveries of ten B787s and was also passing on ten B777 options. Qantas also confirmed it is in talks to delay the delivery of B787s, to be used by its Jetstar low cost subsidiary, to 2011 or beyond, as it aims to preserve cash.

Airbus parent, EADS, meanwhile dropped 4.2%, with news that ILFC was reconsidering its order for ten A380s and Thai Airways was also looking at abandoning its order for six of the same aircraft. The aerospace manufacturer was also struck by news that it plans to request a six-month period to renegotiate the delivery timetable for its troubled A400M military transport. EADS will meet representatives from Spain, Belgium, Britain, France, Germany, Luxembourg and Turkey following the Paris Air Show.

Aviation lessors also displayed weakness, with Babcock & Brown Air down 3.8%, Air Partner falling 2.9% and Genesis Lease down 1.4%. Strength in the segment has been buoyed by suggestions by ILFC, the world’s largest lessor, that there is still significant replacement and fleet modernisation demand over the next five years, putting lessors in a good place to capitalise on demand as the economic crisis erodes airline cash reserves. Recent reports have suggested that ILFC may remain intact and will continue to order strongly, remaining a strong competitor for other firms in the industry. 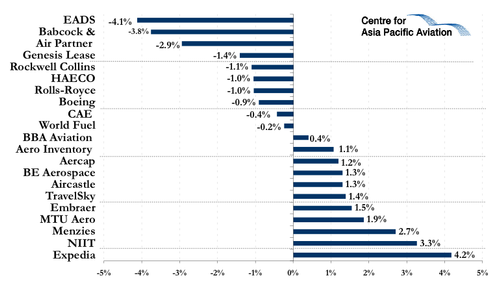