Following rapidly in the wake of decision to award to the 2016 Olympic Games to the city of Rio de Janeiro, two years after the FIFA Soccer World Cup is to be held in Brazil, the authorities moved equally quickly to confirm that the city’s main Galeao International Airport will be privatised and modernised in advance. At the same time, the actual method was left open for further consultation. The announcement came in the same week that Russian authorities announced the privatisation of Moscow’s Sheremetyevo Airport in 2010, part of a raft of measures to sell off equity in state firms.

The international airport in Brazil's largest city, Rio de Janeiro, which in the first week of Oct-2009 won the bid to host the 2016 Summer Olympic Games, will be privatised and modernised to prepare for the Olympics. Rio had faced strong competition from a (US) President Obama-backed bid by his home city, Chicago, one of whose airports is yet to attract the privatisation bucks it longs for, also Madrid and Tokyo, and became the first South American city to be awarded the Games.

It seems as if Brazilian President Luiz Inacio Lula da Silva, who threw his weight behind the city’s bid, carried more clout than the US President and the First Lady, who made the Chicago presentation. President da Silva commented, “I honestly believe it is Brazil's time. It is time to light the Olympic cauldron in a tropical country.” Most observers would agree it is time to get the privatisation of the airports sorted out, it having drifted on for far too long.

In fact, Rio's Galeao international airport, serving the second largest in Brazil, evoked the strongest criticism from members of the International Olympic Committee at the stage of the city's preparations for the 2016 Olympic bidding, the State Privatisation Council stated. And they weren’t the first to comment adversely on its questionable charms. FIFA secretary general Jerome Valcke this week told the O Globo newspaper "the main concern in relation to Brazil is airports. There are no good airports. My feeling is that a lot of people will want to come to Brazil in 2014. It's a special place, a magnificent country." 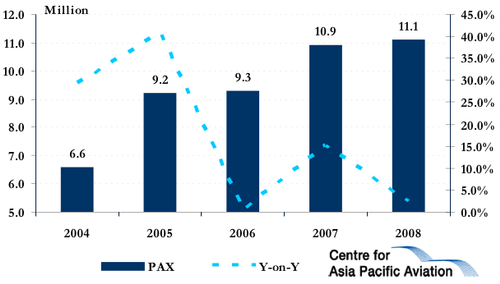 After stagnating for much of this decade, capacity levels at Galeao surged in 2007 and rose again in 2008, but have fallen considerably this year in the wake of the global financial crisis and capacity rationalisation by Brazilian carriers. 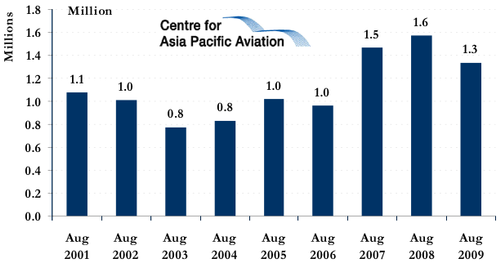 Rio privatisation: There could be further delays

The terms and the exact date of the airport's privatisation would be determined later, the Privatisation Council stated.

The issue of the airport's privatisation was first raised a year ago by the governor of the state of Rio de Janeiro, Sergio Cabral, who said that the need to sell the airport was conditioned by its unsatisfactory infrastructure, poor airport services and ineffective management.

Moreover, there are few major airports in Brazil generally and delays and congestion are common occurrences in the nation's air system. The most critical situation is in Sao Paulo, South America's largest city and a major gateway for international flights. The nation's capital, Brasilia, and Rio de Janeiro also have deficiencies.

The Brazilian government recognises that significant improvements at the country’s outdated airports will be the key to accommodating the hundreds of thousands of visitors expected during the World Cup and Olympics, and is spending billions of dollars on infrastructure in the 12 cities slated to host matches.

Chart 3 below indicates the effect of the Games on passenger traffic growth at Sydney, Athens and Beijing airports in their respective Olympic years, as measured by passenger growth. In fact it is not always spectacular, as a result of a slowdown in business activity around the Games. In the case of Beijing, there was a sharp dip before the event, as a result of heightened security measures. Security will again be a major factor in London in 2012 and Rio in 2016, potentially cutting into airport growth rates around the Games. 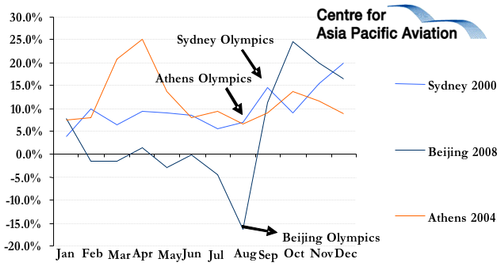 Brazil’s Defence Minister Nelson Jobim last year talked about the possibility of the government building a fourth airport in Sao Paulo and privatising the operations of the international airport in Rio de Janeiro and another in the city of Campinas near Sao Paulo.

But the fact that such a statement was made by the Defence Minister hints at the difficulties Brazil faces in this exercise. The Ministry has long had considerable influence over state airport operator Infraero, a not unusual feature of life on a continent noted for its military coups.

A bigger problem right now is indecision as to how the airports should be privatised. State Governor Cabral may have talked about “selling” the Galeao airport but as reported in the Jun-09 edition (#56) of Airport Investor Monthly the Brazilian government, having enticed potential investors with the impending privatisation of key airports in Rio de Janeiro and Sao Paulo over several years, took them by surprise in May-2009 when it said it would grant management concessions for some of its airports instead.

The system of concessions will be based on a study conducted by ANAC, the Civil Aviation Authority. What emerged then was the feeling that airport privatisation in Brazil will amount to no more than a handful of tightly controlled concessions without any momentous change of ownership.

There is little in this week’s statement to offer more encouragement to investors, but then again most of Brazil’s airports are loss-makers anyway. After modernisation they will probably still be loss-makers. With the Brazilian economy in reasonably good shape the future lies with the Sao Paulo and Rio airports, and especially the latter following its remarkable good fortune in landing two world scale sporting events with only a one year gap in between them.

A good airport operator with experience of the Latin American culture might do well from a concession deal at Galeao, but the work that will have to be done to bring it up to the required standard is immense and they would do well to examine how ACSA went about it in South Africa, in preparation for next year’s Soccer World Cup.

Which, of course, begs the question as to whether ACSA itself, together with its partners in the modernisation of India’s Mumbai Airport (GVK and Bidvest), might relish such a challenge in Rio de Janeiro; an airport similar in size and scope to that of OR Tambo airport in Johannesburg, and Mumbai. ACSA is not involved in the modernisation at Delhi Airport, where the Commonwealth Games will be held in 2010, and GVK does not appear to be ‘up for’ external activities right now, but ACSA may well feel it has all the experience it needs of meeting deadlines in emerging countries, and, like India, Brazil might well become just another BRIC in its wall.

Russia to privatise Moscow Sheremetyevo: Another BRIC in the wall?

The other country to have announced a significant airport privatisation exercise in the first week of Oct-2009 is Russia, the R in BRIC. There are no Olympic Games in prospect here; the last time the event was held here was in Moscow was 1980, when they were extensively boycotted as a result of the Soviet invasion of Afghanistan. (However, the Winter Olympics will be held at the Russian resort of Sochi in 2014).

The Russian Transport Ministry will reportedly privatise Moscow’s Sheremetyevo International Airport in 2010 and the airport will be valued in the order of EUR1.5 billion, with private investment specifically required for a third runway and terminal development. Sheremetyevo is one of the country’s two main gateway airports, along with Moscow Domodedovo, which is already in the private sector. Apart from the need for a new runway, another driver is a new government determination to sell shares in state firms generally, which includes Rosneft, the state controlled oil company, also ports and shipping companies.

“Now is the time to return to privatisation”

The state-owned airport, opened in 1959 and then extended for the 1980 Olympics, is included in a ‘draft plan’ for privatisations in 2010, and the Transport ministry supports the notion of selling Sheremetyevo. Government officials announced a new privatisation drive in Sep-09, First Deputy Prime Minister Igor Shuvalov stating in a television interview that "now is the time that we can return to privatisation." Sheremetyevo was originally slated for privatisation in 1999 and 2010 or 2011 seems to be the most logical time to do it since then as a new state-of-the-art terminal, Sheremetyevo-3 (S3), will be operating fully by then.

S3 is the lynchpin of Sheremetyevo’s attempts to wrestle back its previous position of prominence from Domodedovo airport, which consistently was able to entice western airlines from Sheremetyevo, where long queues and ‘Soviet-style’ service remain the order of the day and which cause foreign investors to say that doing business in Russia is complicated for foreigners. There are also surface transport congestion problems that any new full or partial owner will have to contend with, despite the opening of a new rail link.

Located 30km (18 miles) north-west of Moscow, Sheremetyevo at least remains a hub for the passenger operations of Aeroflot and SkyTeam. It is now the second largest in Russia (after Domodedovo) with a little over 14 million passengers annually and approximately 120,000 tonnes of cargo.

In the first six months of 2009, it lost 10.3% of traffic compared to the previous year. During this decade it has lost a host of western airlines, such as British Airways, Lufthansa, JAL, Iberia, Austrian Airlines, Swiss and Brussels Airlines to Domodedovo, which is a similar distance to the south of Moscow, but which handled more than a third more traffic (20.4 million passengers) in 2008 than did Sheremetyevo.

Domodedovo ahead in strategic planning

Domodedovo, operated by the East Line Group, has regularly been ahead of Sheremetyevo in its strategic planning and since Mar-2009 has been approved for new large aircraft operations such as the A380; the first Russian airport with this classification. Two terminals are being added and there is an express train link to the downtown area.

To combat this, the Sheremetyevo management commenced a major reconstruction of the old Terminal 2 this year. More significant though is the USD90 million Terminal C and, even more so, the 170,000 sq m S3 international Aeroflot/SkyTeam terminal project, also known as Terminal D, which is now scheduled to open in Nov-2009 with capacity for 12 million passengers a year – a capacity that developer JSC Terminal expects to reach within one year of operations.

Moscow’s third airport is Vnukovo Airport, where the city government holds 73.62% in Vnukovo Airport, which owns the airport’s domestic ter­minal, while Vnukovo-Invest, which is owned by Vitaly and Anatoly Vantsev, holds 25% plus one share in the airport. The Vnukovo International Airport is 25%-owned by the city government, while the remaining shares are held by Aviation-Oil Company, headed by Anatoly Vantsev. Vnukovo handled just less than 8 million passengers in 2008.

Immediately after this article was written the Russian Government insisted it has no plans to privatise Moscow Sheremetyevo Airport at present, but reportedly plans to launch a tender for the management of the airport. An IPO for the airport has now been pushed back until at least 2011.

This article was written by the Consulting Editor of Airport Investor Monthly, David Bentley