European airline shares were mostly up on Monday (13-Sep-2010) as wider markets reached their highest close since Apr-2010. Markets were up on improved economic data from China and news that new banking capital requirements announced during the session were not more demanding than present.

Aegean Airlines (+3.6%) was the biggest gainer of the day after the European Court partially annulled a European Commission decision on the amount of money to be recovered from state aid paid to Olympic Airlines. In 2005, the commission had ordered Greece to recover more than EUR600 million from the carrier, which received most of the assets of Olympic Airways, which collapsed at the end of 2003. The court reduced this amount to by approximately EUR131.5 million, after concluding that the commission had not examined rents from aircraft sub-leasing and the value of various intangible assets transferred as part of the restructuring of Olympic Airways.

Olympic Airlines is owned by Marfin Investment Group. Aegean Airlines reached an agreement to merge with Olympic in Feb-2010. The commission launched an in-depth review of the proposed agreement in Jul-2010 over concerns it would harm competition.

Aer Lingus (+2.6%) shares were boosted after Group CEO, Christoph Mueller, stated the carrier plans to step-up alliance talks with oneworld's British Airways. It has also held talks with Star Alliance and SkyTeam Alliance carriers as it decides which alliance to join in 2011.

Mr Mueller added that United Airlines and KLM will act as intermediaries in discussions with Star and SkyTeam, respectively. Mr Mueller described the alliance decision as "complicated" adding that the carrier has roughly an equal contribution to revenue of existing agreements with alliance members.

Aer Lingus was a member of oneworld until 2006, when it pulled out stating revenue benefits were not sufficient. Mr Mueller stated a 29% stake in Aer Lingus held by Ryanair is likely to be an issue in talks but should not hinder the alliance plan. Mr Mueller added that in the longer term, Aer Lingus is open to a future partner taking a minority holding in the carrier but added that it has no plans to be taken over. He added that the stake held by Ryanair may also “scare people off from taking a large shareholding".

The deal includes a one-year pay freeze to Oct-2010 and will reduce manpower by 500 by Mar-2011 with 300 of the reduction already being delivered using voluntary redundancy and new opportunities for flexible working options, such as voluntary part-time contracts.

Elsewhere, Air Berlin (-2.7%) declined, as did TUI Travel (-1.4%) and El Al (-0.9%), after the carrier suffered flight cancellations due a strike at its Tel Aviv Ben Gurion Airport base by Israel Airports Authority employees. 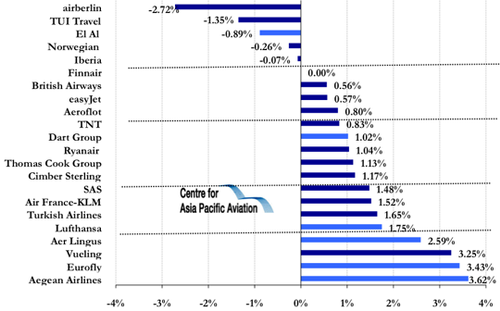