Norwegian has had a challenging start to 2014. It has announced a record first quarter loss, as unit revenues plunged on the back of 48% ASK growth and unit cost cuts failed to keep pace. The loss was exacerbated by additional costs associated with the launch of long-haul operations and by currency movements.

It also faces strategic hurdles. Delays by the US Department of Transportation in granting a foreign carrier permit to its Irish subsidiary Norwegian Air International cast some uncertainty over its long-haul expansion. In addition, Norwegian faces possible strike action from Scandinavian cabin crew over new labour contracts, which it plans to transfer to new subsidiary companies.

Norwegian's low-cost model, and its long-haul application, demand innovative paths to grow without being tied to Norway's high labour cost environment. It has identified such paths, but innovation often provokes resistance. CEO Bjorn Kjos will need to draw on all his experience as a fighter pilot, lawyer and novelist to find the resilience, cunning and imagination needed to meet 2014's continuing challenges.

The first quarter of the calendar year is seasonally the weakest quarter and typically loss-making, but this adjusted operating result was Norwegian's heaviest 1Q loss and represented 24.8% of revenues. Norwegian said that it suffered NOK78 million (EUR9 million) of additional costs in the quarter in connection with technical and operational problems with the nascent long-haul network.

In addition, it said that costs were inflated by more than NOK200 million by the depreciation of the NOK against the USD and EUR. Even after taking these points into account, the adjusted operating loss would still have been higher than any previous 1Q.

The higher sector length reflects the development of the new long-haul network and also the growth of Norwegian's bases in Spain and London Gatwick, where its European routes are longer than from its Scandinavian bases.

Norwegian's load factor gain in the quarter was (just) higher than it has achieved in any previous 1Q and was in line with the average load factor recorded by members of the Association of European Airlines. 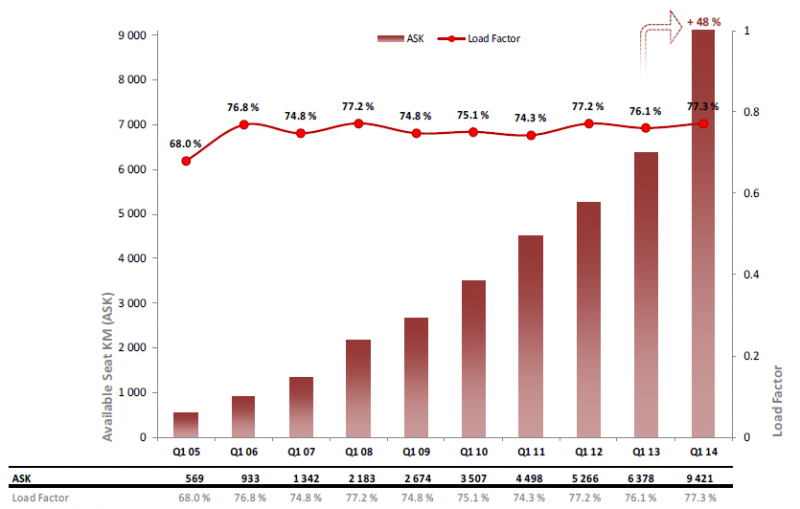 Norwegian's total revenues grew by 22% year on year in 1Q2014, well below the growth in ASKs and slightly below the growth in passenger numbers. Moreover, passenger revenues grew at the slower rate of 17%. Total revenue per ASK (RASK) fell by 17% and passenger revenue per ASK fell by 21%. While increased sector length is typically associated with lower RASK, this drop in unit revenues also reflects underlying pricing weakness.

CEO Bjorn Kjos and head of investor relations Karl Peter Gombrii told analysts on a conference call to discuss the 1Q results that price weakness was most apparent in the Nordic markets, Norway in particular. The fact that passenger revenues (and total revenues) grew at a slower rate than passenger numbers when average sector length grew highlights this price weakness.

Norwegian does not break down its traffic figures by region, but its statement does refer to 'minor increases' in domestic capacity. This fall in domestic revenue suggests a substantial weakening of demand, leading to the need for price stimulation, in its own back yard.

We cannot estimate a further breakdown between European international traffic and intercontinental traffic, but it seems likely that both the longer average sector length and price declines contributed to this estimated RASK weakness on international routes.

New routes typically require price stimulation and this seems very much to be the case for Norwegian on its new European and long-haul routes.

Norwegian's operating costs, at the level of reported EBIT, grew by 53% year on year, but this included a lower offsetting positive figure from the line 'other gains and losses'. This item includes gains/losses from foreign currency contracts and on working capital in foreign currency. Excluding this non-operating line, costs grew by 43%, still much faster than revenue growth, but slower than ASK growth.

Fuel costs increased by 48%, in line with ASK growth, while non-fuel costs (excluding other losses/gains) grew by 41%. Within non-fuel costs, labour costs grew by 22%, well below ASK growth and also slightly below passenger growth. Labour cost growth was also lower than the increase in the average number of man-labour years, which was up by 31% year on year.

The key to success for Norwegian's expansion, particularly on long-haul, will lie largely with labour costs and the control over staff cost growth shown in the 1Q2014 results is encouraging. However, it has recently been unable to reach agreement with cabin crew over the reorganisation of employment contracts.

The cost categories that grew fastest were maintenance (up 67%) and leasing (up 60%), both growing much faster than ASKs. Maintenance cost growth was due to expenses related to Norwegian's new Boeing 787 fleet and also NOK weakness against USD. Leasing cost growth related to the use of wet lease aircraft on international routes and 787 lease costs, in addition to NOK weakness.

In spite of a 15% sector length increase in 1Q2014, Norwegian's cost per available seat kilometre (CASK) fell by only 3% (note that we calculate CASK using costs at the EBIT level and excluding other gains/losses, while Norwegian's published figures use costs at the EBITDA level). As noted earlier, costs were inflated by currency impacts and one-off costs in connection with the launch of long-haul routes.

Without these items, the fall in CASK would have been around 10%, a better performance but still well short of the 17% drop in RASK.

Norwegian has announced that it will lease three new Boeing 787-9 Dreamliners for its growing long-haul network, bringing the total number of firm orders for the variant to nine. Four of these will be delivered in 2016, three in 2017 and two in 2018. It also has five 787-8 aircraft in operation and three of this variant on order (one for delivery in 2014 and two for 2015). 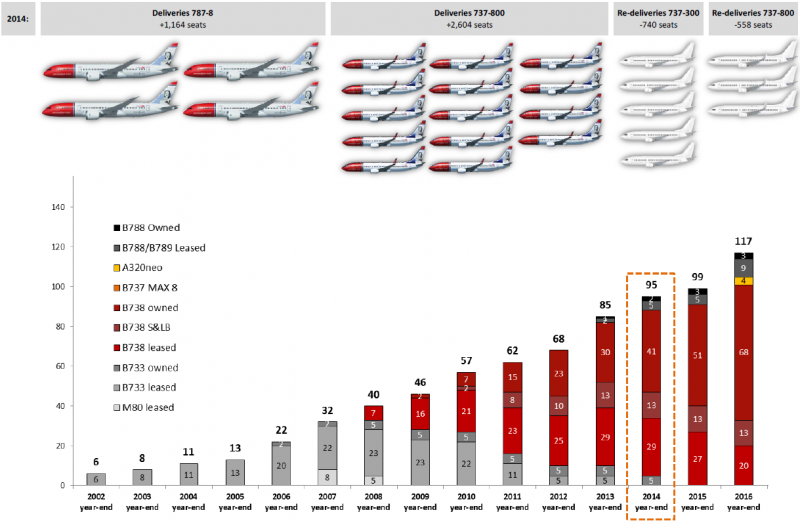 Norwegian has established an Ireland-based financing subsidiary, Arctic Aviation, into which it has reportedly invested USD349 million (Irish Independent, 19-Apr-2014). This leasing vehicle will be able to lease out to third parties any spare aircraft, should Norwegian not need the capacity it has ordered.

Norwegian remains focused on achieving unit cost reductions (it targets a FY CASK ex fuel of NOK0.25 versus NOK0.29 reported in 2013, using costs at the EBITDA level, without specifying the year for this target).

There is scope for unit cost efficiencies from a number of sources, including the phase out of the 737-300 in favour of the 737-800, the phase-in of the fuel-efficient 787, increased automation, higher short-haul utilisation and the outsourcing and off-shoring of employees. A major thrust of Norwegian's drive towards lower CASK is the ongoing increase in average sector length.

The chart below shows how Norwegian's annual RASK and CASK followed declining trend lines as average trip length increased over the period 2005 to 2013. As the chart shows, the small, but growing proportion of long-haul capacity in Norwegian’s total ASKs will lower CASK regardless of any underlying cost efficiency measures. 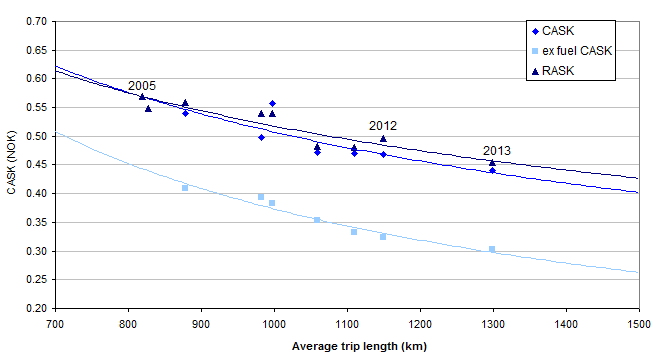 The following chart plots Norwegian's 1Q RASK and CASK over recent years and also shows the annual trend lines from the previous chart. It demonstrates the seasonal weakness of the first quarter, when RASK is below its annual trend line and CASK is above its trend line. RASK weakness in 1Q reflects seasonally weaker demand than in the rest of the year.

The higher CASK of 1Q reflects lower levels of capacity, while fixed costs are not very different from peak season. The chart also illustrates that it is normal for CASK to be higher than RASK in 1Q.

What is not so normal on the chart, however, is the sharp divergence between RASK and CASK that is apparent in 1Q2014. RASK slumped by 17% year on year, falling well below the trend line and more than should be expected from the increase in average trip length. At the same time, CASK fell only 3%, less than should be expected from the increased distances. 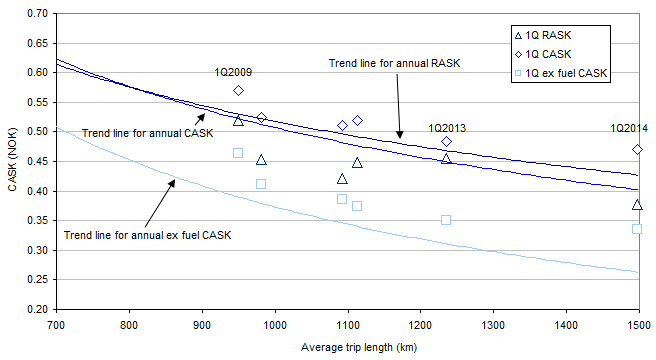 As Norwegian continues to build its new network, with both long-haul expansion and the development of new routes and bases in Europe, it may continue to suffer from weak RASK and higher than hoped-for CASK.

Pricing weakness comes with the territory when capacity expansion is rapid and new routes are launched, particularly when price is the main dimension of competition. In addition, new operations using new aircraft types often experience 'one-off' start up costs that were not fully anticipated.

For FY2014, Norwegian is aiming to increase ASKs by 40%, slower than the 48% growth in 1Q2014, but still a rapid rate of growth that is likely to lead to further significant downward movement in unit revenue. Its unit cost target for FY2014 is around 5% lower than in FY2013, implying better progress on unit costs in the rest of the year than the 3% cut in 1Q, but not enough to match the likely fall in unit revenues.

Norwegian cannot afford to relax its focus if it is to manage its way successfully through this period and move into a new phase where the relative growth of RASK and CASK becomes favourable once more. This does not look likely in 2014, which seems set to produce lower profits for Norwegian compared with last year.