The Guyana market will see a major capacity boost in April when the small South American country receives only its fourth international carrier, Surinam Airways. The flag carrier of neighbouring Suriname will link Guyana's Georgetown with Suriname's Paramaribo and, more importantly, Miami. The Miami-Georgetown service, which will begin on 02-Apr-2012, will be the first service connecting the two cities non-stop in over a decade.

While only two weekly flights, the new Miami-Georgetown route represents a significant boost in scheduled, non-stop capacity between the US and Guyana. Currently Guyana only has non-stop, scheduled service to the US from Delta Air Lines, which operates service from New York JFK on a highly variable schedule depending on the season. Delta launched the route in Jul-2008, filling a void left by North American Airlines which operated scheduled services between New York JFK and Georgetown from Sep-2007 to May-2008.

Delta’s current Georgetown schedule of four weekly Boeing 757-200 flights provides 1,440 weekly seats and accounts for almost 9% of total international capacity in Guyana. Surinam Airways will provide an additional 504 weekly seats between Guyana and the US, a 35% increase based on Delta maintaining its current four times per week schedule. Delta and Surinam Airways will largely target different markets given Delta's service to New York requires significant backtracking for passengers wanting to travel to Miami, another locale for the Guyanese diaspora. 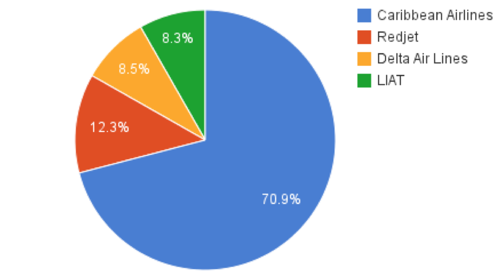 While Delta is currently the only carrier operating scheduled non-stop flights in the US-Guyana market, Surinam Airways will face stiff competition in the market from the largest airline serving Guyana, Caribbean Airlines. Caribbean Airlines does not offer non-stop service between Georgetown and the US, but it does offer a daily, same-plane service via Port of Spain to Miami and New York JFK.

Caribbean Airlines’ dominance and strong position in the Guyana market, where it currently accounts for 71% of total capacity, can make it difficult for Surinam Airways to compete. Surinam Airways will need to leverage the advantage of a non-stop flight to South Florida, which just might give the small airline the boost necessary to be successful in the Guyana market. Surinam Airways might also be able to leverage interline opportunities via Miami, as the afternoon arrival and departures from Miami will allow Georgetown passengers to make a variety of connections to/from North America and Europe. Surinam Airways interline partners that already serve Miami include Air France, Delta Air Lines and Transaero.

The new Surinam Airways service will also represent the only link between Georgetown’s Cheddi Jagan International Airport and any another airport in South America. Small Guyanese carrier TransGuyana currently operates a link between Georgetown’s smaller Ogel Airport and Paramaribo’s smaller Zorg en Hoop Airport. Georgetown-Paramaribo is TransGuyana’s only international route, which it currently serves with 10 weekly flights in each direction.

Between Georgetown and Bridgetown, Caribbean Airlines competes against archrival LIAT, which operates two daily Bombardier Dash 8 turboprop flights on the route, and low-cost carrier REDjet, which operates four weekly flights on the route with Boeing MD-80s. Connections at Bridgetown are available throughout the Caribbean as well as on foreign carriers to Europe and North America.

REDjet also competes with Caribbean Airlines on the Georgetown-Port of Spain route, but only offers three weekly MD-80s flights. REDjet, which is based in Barbados, also operates one weekly MD80 flight from Georgetown to Antigua.

Guyana and Suriname have strong ties to the Caribbean

A former British colony that gained independence from Britain in 1966, English-speaking Guyana is more closely connected with Caribbean nations than its South American neighbours. Guyana is a member of, and Georgetown is the headquarters for, the Caribbean Community and Common Market (CARICOM). Given its closer economic and cultural ties to the Caribbean rather than the continent on which it lies, the current lack of flight links to the rest of South America is not surprising. 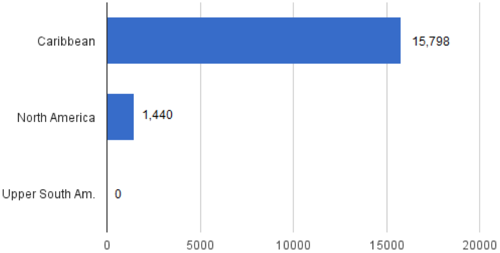 The new Surinam Airways service at Georgetown also allows the Suriname flag carrier to increase its offering on the one-stop Paramaribo-Miami route from thrice weekly to five times per week. Surinam Airways will continue to operate to Miami via Aruba on Monday, Wednesday and Friday after the new flights via Georgetown are added.

There are currently no non-stop services linking Surinam with the US. Paramaribo is currently served from several Caribbean destinations and from Amsterdam in the Netherlands, Belem in northern Brazil and Georgetown. The small number of flights within Latin America for Paramaribo is not surprising as Suriname is also a member of CARICOM. Guyana and Suriname are the only South American members of CARICOM, which also consists of 13 countries in the Caribbean.