ACI World stated that Nov-2010 traffic data indicates that 2010 will set a new record for global airport industry traffic with total passenger growth of near 7%. ACI also noted that freight growth has been “exceptional” in 2010 despite a marked slowdown in 2H2010. Growth of close to 18% is expected to “more than compensate” from the 8% slump in 2009. 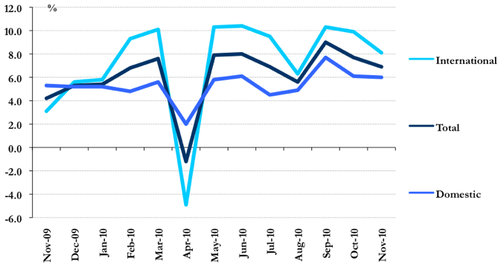 However, ACI noted that Europe appears to be on track to becoming the largest traffic region in 2010 for the first time ever, moving ahead of the North America market. ACI added that it “remains to be seen how significantly the harsh winter weather will affect December traffic results”. 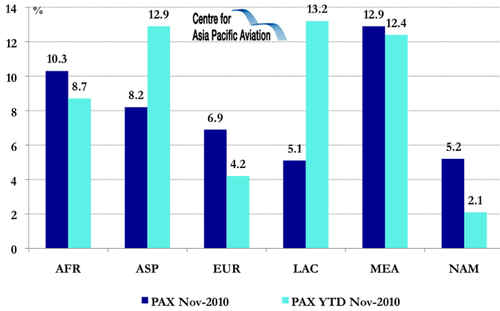 Only 15% of airports witness passenger reduction in Nov-2010

The worldwide growth average was slightly dampened by results reported from Athens (-9.5%), Mexico City (-9.5%), London Stansted (-7.5%), and Tokyo Narita (-6). Overall, however, only 15% of airports in the sample registered a reduction in passengers.

In Asia Pacific, the largest market China has slowed to single digit growth, which is the slowest growth rate in the region since Jul-2009. Europe benefited from very robust growth in Russia and Turkey. North America results are pushed by domestic carrier competition especially on the East Coast, whereas Latin America-Caribbean results were dragged down by traffic drops in Mexico where the security situation weighs on demand for inbound travel.

Freight traffic growth, meanwhile, is still slowing relative to its rapid rebound in 1H2010. Freight increased 4.3% year-on-year in Nov-2010, marking the slowest month of growth since Oct-2009, although growth compares to an 11% increase in Nov-2009. Year to date, global freight growth is 18.2%. 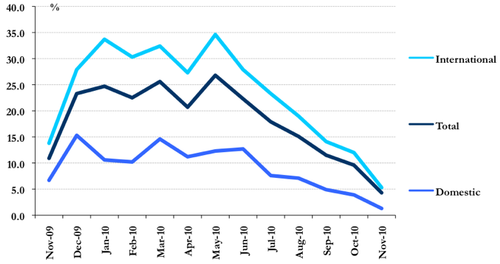 ACI, meanwhile, noted that the divergence among the regions in freight growth is less pronounced than in the passenger sector, as all regions enjoyed double digit growth earlier in 2010.