On the list of 30 top airports for 2010, three nations have multiple representatives: the US with 13, China with four and Germany with two. Worth noting is that neither of the German airports is located in the nation’s largest metro area. According to EU statistics, Frankfurt and Munich rank fifth and sixth in terms of German metro areas, with Berlin, Dusseldorf, Cologne and Hamburg all larger.

Home carrier Lufthansa has built extraordinary networks at both airports and one wonders just how the airline will accommodate a new and consolidated operation at the capital, Berlin, when the Brandenberg facility is completed next year.

Munich as a Frankfurt alternative

The construction of MUC began in 1980, long before Germany’s unification and the possibility that Berlin would regain its national status. When that occurred in 1989, MUC was nearing completion – opening in 1992 – and replacing the congested and outdated Munich Reim.

In many ways, Frankfurt and Munich are operated as a single hub, but with two locations. Many long-haul flights have different timings allowing connecting passengers a choice of departure times. A passenger from Athens to SFO or LAX can connect early in the day over FRA or later in the day via MUC. Passengers from the US west coast can reach Delhi twice daily, and at different times, depending on the hub connection chosen.

And to places like Bangkok or Johannesburg, LH, SA and TG all serve Frankfurt, while SA and TG provide the MUC service. There is a clear schedule integration between the two airports, calculated to provide passenger alternatives.

All of this of course means that it does not require great thought to figure out who the airport’s prime tenant is: Lufthansa. 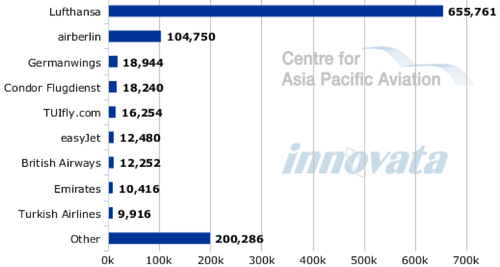 The carrier’s share, at 63% is identical to its share at FRA, though the other top placeholders, save airberlin and BA, are quite different. At both airports LH has a much higher share than is seen at most airports outside the US. And given that reality, Star is the dominant alliance at MUC as well, with 72% as contrasted with 78% at FRA. 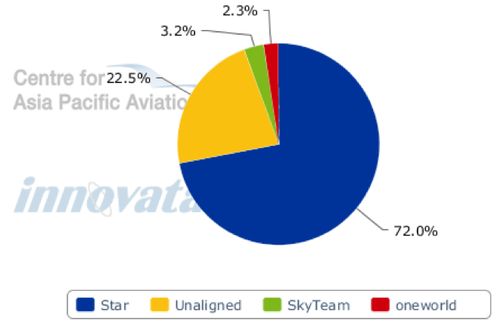 oneworld can hope for a slight boost with the addition of airberlin next year.

Munich, also like Frankfurt, has a relatively high concentration of international traffic, especially given the fact that Germany has a mature and sizeable domestic network. 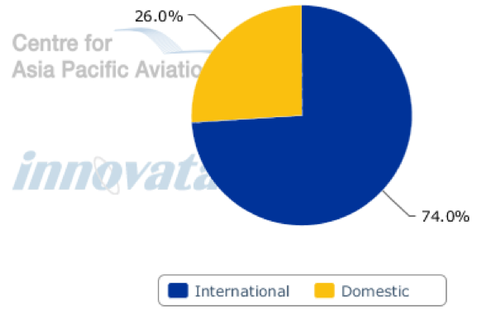 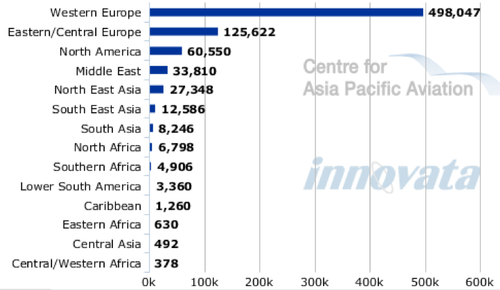 With a few exchanged places, the number of seats per region also lines up rather closely with the pattern seen at FRA, although the numbers for FRA are larger in almost every case, with MUC available seats to regions such as North America and the Middle East being less than half of those offered at FRA.

One difference is the fact that Dubai edges its way into the top international destinations. This hints that perhaps passengers destined for South Asian and African destinations served by LH from FRA are instead choosing to transit DXB for journeys beginning in MUC. 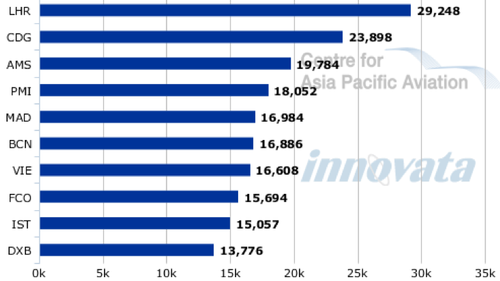 Compared with some European airports, and like its sister hub to the north, Munich hosts a relatively small LCC presence but, nonetheless, it is significantly more than seen at Frankfurt. Part of that may be due to the greater availability of slots at MUC, though at peak hours, the airport is at capacity. 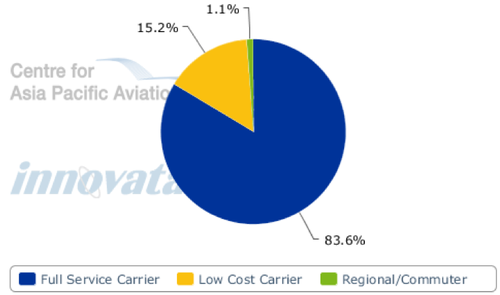 A proposed third runway has just been approved by local authorities so, like Frankfurt, additional slot capacity may soon be available. But this will be completed soon after the new capacity at BBI comes online.

The real question for Lufthansa, and with probably a greater effect at MUC than FRA, is the role that the new Berlin airport will play in Lufthansa’s network strategy. Up until the completion of the new facility at BBI, long-haul access to Germany’s largest city and its capital has been restricted by airport capacity.

With the opening of BBI, those inhibitors will go away and the millions of residents in Berlin will seek direct flights across the globe — capacity doubtless happily supplied by the world’s carriers anxious to tap a new, affluent long-haul market. What little intercontinental capacity is available has been provided by airberlin rather than Lufthansa which has concentrated on connections over either FRA or MUC.

Too much of a good thing

Will Lufthansa be forced to add a third hub to sustain its position in Germany? In a high fuel-cost environment, is it possible to add a third German city with a large long-haul network? And if that is not the case, which present hub will be diminished as Berlin grows? Or, in 10 years, will Germany have three airports in the top 30? The German market is Western Europe’s richest and most populous, but will the addition of BBI make serving that market more costly for its home carrier? Or will LH cede the new gateway to airberlin?

With June 2012 and BBI’s opening less than a year away, we will find out fairly soon.