Although Mexican airlines continue to battle currency fluctuation triggered in large part by ongoing tariff threats from the US, overall they remain comfortable with domestic demand, and transborder capacity is starting to rationalise. However, a huge cloud of uncertainty is hovering over the fate of Mexico City’s airport infrastructure.

After Mexico’s president Andres Manuel Lopez Obrador (AMLO) cancelled completion of a partially constructed new airport, he offered less than attractive alternatives that include bolstering Toluca airport and constructing two new runways at an air force base near Mexico City. But the runway construction has come under criticism, and the project is reportedly on hold.

Plans are under way for a third terminal at Mexico City Juarez, but it remains to be seen how much the expansion will alleviate congestion at an airport that is already operating well above its capacity. And ultimately, Mexico City’s potential to become a powerful global hub will be significantly diminished.

During his campaign Mr Obrador pledged to halt construction of the new airport, describing the project as a waste of taxpayer money.

After his election he set up a public referendum to settle the airport’s fate and in Oct-2018 voters who participated in the referendum endorsed scrapping the project. At that time, one third of the airport’s new construction was complete, at a cost of approximately USD5 billion.

Mr Obrador’s government then offered what it deemed to be cheaper alternatives to address congestion at Mexico City Juarez – the addition of two runways at Mexico City’s Santa Lucia military base and the construction of a new terminal.

Previously, the government has stated that the projects can be completed in three years and within the country’s existing budget. Mexico’s army would be responsible for the new construction at the airport.

But that project has hit potential stumbling blocks. The Associated Press has reported that a Mexican anti-graft group has stated that a judge has provisionally halted the project. The group, Mexicans Against Corruption, said the project was on hold until the government presents assurances that the construction will not harm the environment.

There has also been discussion about bolstering operations at Toluca airport, which is 64km southwest of Mexico City. As previously reported by CAPA, Toluca handled 4 million passengers at its peak in 2008, but since that time two of the airport’s four terminals have closed and in 2016 the airport’s annual passenger levels dropped to 771,000.

Mr Obrador’s decision to halt construction of the new airport has drawn criticism from outside and inside aviation circles.

In the latest edition of Americas Quarterly, political science professor Genaro Lozano has penned an analysis of Mr Obrador’s first six months in office and concluded that Mr Obrador's controversial decision to cancel the new airport “created a level of mistrust that will follow him through his presidency”.

Mr Lozano said the decision to nix the project has helped to mobilise previously apolitical middle class voters against Mr Obrador. He also stated that the “resulting airport at Santa Lucia stands little chance of solving Mexico City’s airport saturation problem, much less of turning it into a hub for air travel in Latin America”.

IATA CEO Alexandre de Juniac, speaking at the 2019 IATA AGM and World Air Transport summit, declared that Mexico City is the "poster child for deficiencies" when it comes to infrastructure issues on the airport side. He noted that a solution for the city's "infamously congested airport" was at its midpoint when the newly elected Mexican Government "pulled the plug with no viable alternative".

Association Regional VP of the Americas Peter Cerda told CAPA TV at the recent CAPA Americas Summit in Denver, Colorado, that the new airport would have given Mexico City a strategic geographic benefit compared with other hubs in Panama City, Houston, Dallas or Miami, with respect to connections from North America, Asia and Europe. Airlines would have been in a position to use one hub for interregional service, international routes and domestic service.

IATA Regional VP of the Americas Peter Cerda at the 2019 CAPA Americas Summit in Denver, Colorado

Passengers would arrive at one international airport and then travel 25km to a domestic airport. “In terms of connectivity that is too much time", Mr Cerda explained, and it places Mexico City at a disadvantage relative to other hubs.

Plans are under way to create a third terminal at Mexico City Juarez International; but the Mexico Daily News has quoted ALTA President Luis Felipe de Oliveira, saying that while new infrastructure is always positive, there is no way to increase the number of runways at Juarez and connecting between three terminals is not ideal.

As the fate of constructing new runways at Santa Lucia faces uncertainty, Mexico City Juarez continues to operate well above its capacity of 32 million passengers.

The airport handled 47 million passengers in 2018, which was nearly 7% growth year-on-year, and for the first five months of 2019 passenger levels at Juarez increased 6% from those of the same period of 2018. Planned capacity for the new airport was 100 million passengers annually. 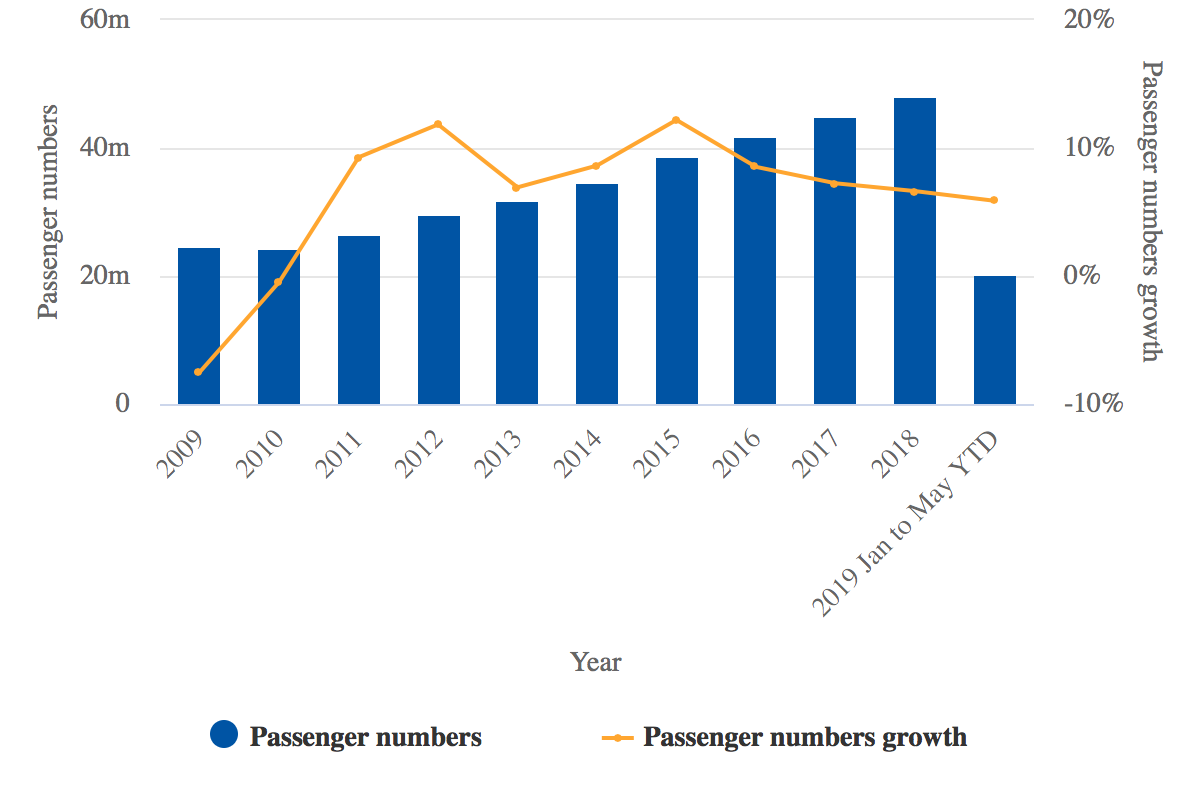 For airlines operating at Mexico City Juarez international the growing uncertainty over the city’s airport system in the future creates challenges for determining how the airport will factor into their medium to long term planning.

As a result, Mexico City’s stature in the networks of larger global operators will no doubt continue to fall as those airlines look for more viable connecting hubs.