Passenger traffic growth slowed significantly in 2014 as Malaysia’s airline sector adjusted fleet and capacity plans in response to challenging market conditions. Passenger numbers grew less than 5% in 2014 and growth is expected to again be in the low single digits in 2015 as further adjustments are implemented, including anticipated capacity cuts at Malaysia Airlines (MAS).

This is the first instalment in a report on the Malaysian market and the outlook for 2015. This part will focus on MAS and the recent reduction in passenger numbers in Malaysia. The second part will focus on AirAsia and AirAsia X.

Passenger traffic at Kuala Lumpur International Airport (KLIA) increased by only 3% in 2014 to 48.9 million, marking the slowest growth rate in several years. KLIA's passenger growth rate peaked at 19% in 2013, which made it the fastest growing major airport in Asia. 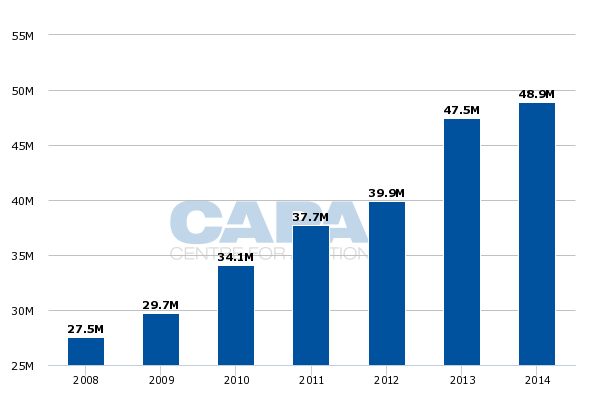 KLIA passenger numbers grew another 16% in 1Q2014. Passenger growth at KLIA started slowing in 2Q2014 but was still positive all three months of the quarter. 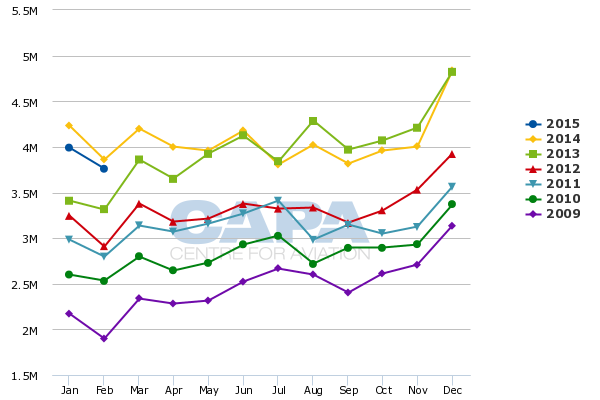 The slowdown in growth was not driven by the twin tragedies

The slowdown at KLIA and the Malaysia market overall came as most Malaysian carriers stopped expanding. While the Mar-2014 MH370 incident impacted demand, particularly in the Malaysia-China market, this only slightly accelerated the slowdown. The Jul-2014 MH17 incident also had a relatively slight impact on passenger traffic, exacerbating what was already an extremely challenging market suffering from overcapacity.

Regardless of the twin tragedies the Malaysia market would have only seen modest passenger growth from 2Q2014 given the dramatic capacity expansion from the last three quarters of 2013. The growth in 1Q2014 was mainly a result of capacity initially added in 2013.

The rate of capacity growth from 2Q2013 through 1Q2014 was simply not sustainable as it prompted over-aggressive competition and a significant reduction in yields. MH370 and MH17 merely exacerbated the situation.

Malindo continued to expand in 2014 but on a much smaller base and at a relatively modest level given it is still in the start-up phase. Most of Malindo’s expansion in 2014 was on turboprop routes from Kuala Lumpur’s second airport Subang, resulting in intensifying competition with MAS regional subsidiary Firefly.

Malindo expanded its ATR 72 fleet by eight aircraft in 2014 for a total of 11 while adding just two 737s for a total of eight. Malindo is expected to further expand its turboprop operation in 2015 while also pursuing relatively modest growth of its KLIA-based jet operation.

MAS has not released full-year traffic data as the airline group was delisted in Dec-2014 as part the restructuring pursued by its shareholder, government investment firm Khazanah. But in its final months as a public entity MAS reported monthly year over year ASK growth of about 1%.

The recovery plan initially announced by Khazanah in late Aug-2014 outlined capacity cuts primarily across the long-haul operation. The new strategy envisions MAS focusing on the Asia-Pacific region while relying more on partners to cover other markets. The restructuring plan also outlined 6,000 job cuts, which Khazanah hopes will improve the carrier’s competitiveness in the short-haul market.

The implementation of the recovery plan however has been extremely slow. Over the last five months the airline has continued to maintain the same capacity levels and its aggressive pricing strategy. Capacity and staff cuts are finally expected to be implemented over the next few months as MAS transitions to a new structure by Jul-2015.

MAS has been a tough competitor

MAS initially adopted a more aggressive pricing strategy in 2013 as it tried to stimulate demand and fill up the surge in additional seats. MAS passenger traffic increased by 29% in 2013 and by another 21% in 1Q2014. As a consequence MAS incurred USD462 million in losses over this 15-month period as the increase in passenger numbers and load factor failed to offset the significant drop in yields.

MAS had to maintain the aggressive pricing strategy and in some cases engage in even steeper discounting following MH370 and MH17 as it tried to win back passengers. MAS incurred another USD276 million in losses in the Apr-2014 to Sep-2014 period as yields continued to drop while load factors also began to decline.

MAS or Khazanah, which now owns a 100% stake in the flag carrier, is not expected to release financial figures for 4Q2014 or CY2014 as the airline is no longer publicly traded.

The deep discounting has for the most part continued in recent months. MAS competitors are optimistic the flag carrier will adjust its pricing strategy as it starts to implement its restructuring plan. But it could take time for the new MAS executive team to complete a review and make decisions.

The new MAS executive team has only been on the job for a few weeks and does not formally take over the reins until the beginning of Jul-2015. In the meantime the old executive team continues to look after day to day operations, as they have since the start of the transition process to the new company five months ago.

MAS will finally cut capacity with focus on long-haul network

MAS is expected eventually to cut ASKs by about 10%. But seat capacity and passenger numbers will likely not drop as significantly because the cuts will mainly be on long-haul routes. The new MAS business plan focuses on regional operations within Asia, where there will likely be no, or limited, capacity cuts.

MAS has still not yet revealed which long-haul routes it will cut although it has been reviewing its long-haul network for several months. A final decision is likely being left to the new management team.

MAS cut five long-haul destinations in its last restructuring in early 2012, including Buenos Aires, Cape Town, Dubai, Johannesburg and Rome. Dubai was resumed in 2013 while MAS dropped services to Los Angeles in Apr-2015.

This expansion led to intense competition with Malindo, AirAsia and AirAsia X, as all these carriers focus on short/medium-haul operations within Asia-Pacific. AirAsia X has only one route outside Asia or Australia – Jeddah in Saudi Arabia, which MAS is unlikely to cut.

The main beneficiaries of the upcoming network restructuring at MAS will be the Gulf carriers, which will be able to further grow their share of the Malaysia-Europe and Malaysia-Middle East markets. The four European flag carriers (soon to be five) serving Kuala Lumpur also stand to benefit along with Singapore Airlines and Thai Airways, which have by far the most comprehensive European networks among Southeast Asian flag carriers.

MAS is likely to adjust its widebody fleet plan

MAS is unlikely to cut its A330 fleet as the aircraft are new (about three years on average) and used almost entirely on medium-haul routes within Asia-Pacific. The six A380s, used to operate two daily flights to London and one daily flight to Paris, are also only about three years old but could prove to be too large for the new MAS.

The leases on the 777-200s expire in 2016 to 2018, providing MAS an opportunity to transition to new-generation widebody aircraft. The 777s are by far the oldest aircraft type in the MAS fleet. MAS was close to deciding on a 777 replacement prior to MH370 but delayed the process of selecting a new generation widebody following the two incidents. Replacing the 777s and revisions to the overall long-haul fleet plan, including the potential sale or sub-lease of the A380s, will be one of the first major decisions of the new management team.

MAS currently has no commitments or orders for new widebody aircraft, which gives the new management team flexibility as it reviews its options. MAS also only has 10 remaining aircraft from its 737-800 order. MAS currently operates 57 737-800s, which are also on average only three years as MAS only completed the phase out of 737-400s in 2014.

The group is also slated to take six additional ATR 72-600s in 2015, with four being allocated to Firefly and two to MASWings. Both regional subsidiaries have mainly been using the new ATR 72-600 fleet to replace older model ATR 72s. The last batch of aircraft from the group’s original commitment for 20 ATR 72-600s is currently slated to be delivered in 2017. 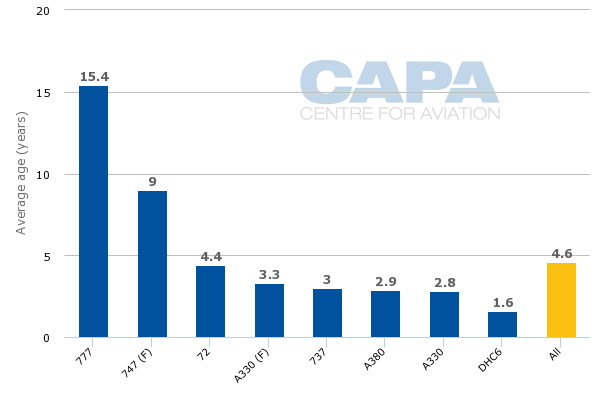 Market conditions in Malaysia’s short and medium-haul market including domestic are likely to remain extremely challenging as MAS is not expected to adjust capacity significantly within Asia-Pacific. Passenger growth will slow as capacity increases only marginally but it could take at least several more months for the increases of the last two years to be fully absorbed.

Yields should improve somewhat as the rate of capacity growth becomes more rational but competition will remain intense and overcapacity will likely persist on several key routes.

Malaysia Airports is only expecting passenger growth of about 3% in 2015 with similar increases in the domestic and international market. The domestic growth will likely be driven mainly by further expansion at Malindo, which is still the smallest of three domestic players in Malaysia with an approximately 9% share of total seat capacity.

International passenger growth will also likely by driven by Malindo and to some extent foreign carriers. British Airways plans to relaunch services to Kuala Lumpur in late May-2015. Kuala Lumpur is currently only served by four European carriers – Air France, KLM, Lufthansa and Turkish – as the most rapid growth in recent years has come from the Gulf carriers.

AirAsia growth in Malaysia will be modest as both its short and long-haul carriers will continue a focus on improving yields. The 2015 outlook for Malaysia AirAsia and Malaysia AirAsia X, including capacity and fleet plans, will be examined in the second part of this two-part report.

The two AirAsia carriers currently account for about a 38% share of seat capacity in Malaysia compared to 35% for the MAS Group and 5% for Malindo.