Kuala Lumpur International traffic surges another 16% in 1Q2014. Is the growth sustainable?

Malaysia continues to record some of the world’s fastest passenger growth rates, driven by rapid capacity expansion by Malaysia Airlines (MAS) and AirAsia along with the launch of Malindo Air.

Malaysia Airports has recorded 18% passenger growth for 1Q2014, including 16% at Kuala Lumpur International Airport (KLIA). This follows growth of 18% for the full year in 2013, including 19% growth at KLIA, making it the fastest growing major airport in Asia.

The rate of growth is expected to slow down for the remainder of 2014 but remain in the double digits for the full year. The growth over the last year has been spectacular but has come at the expense of airline yields and hence profitability.

Malaysia Airports Holdings Berhad (MAHB), which operates all but one of the commercial airports in Malaysia, handled 26.1 million passengers in 1Q2014, representing an increase of 18% compared to 1Q2013. The 26.1 million is the highest figure for any quarter in MAHB’s history.

MAHB has been almost constantly breaking records since 1H2013, when MAS began to pursue aggressive expansion, ending a period of restructuring. The expansion came as new Lion Air Group hybrid subsidiary Malindo, which launched services in Mar-2013, entered the market. AirAsia also has been pursuing further rapid expansion at both its short-haul and long-haul affiliates.

MAHB’s total throughput increased 18% in 2013 to a record 79.6 million passengers. Domestic traffic was up by 18% while international traffic surged by 20%.

The overall 18% growth rate was the highest figure for MAHB in at least 10 years. Even in the initial years of AirAsia growth topped out at 16%. 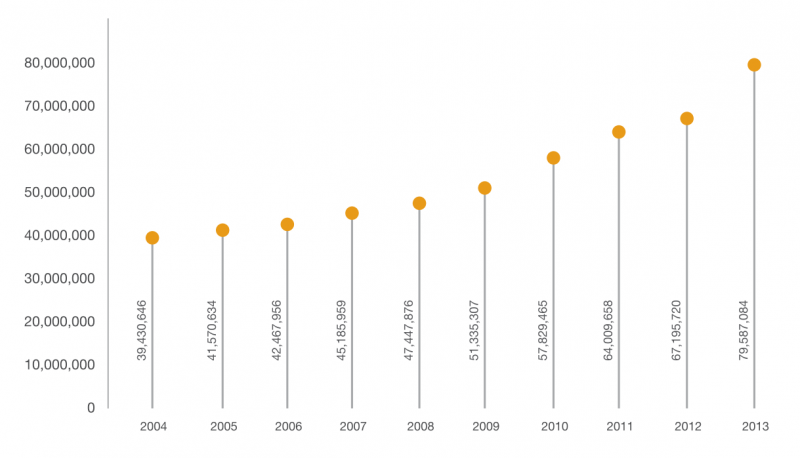 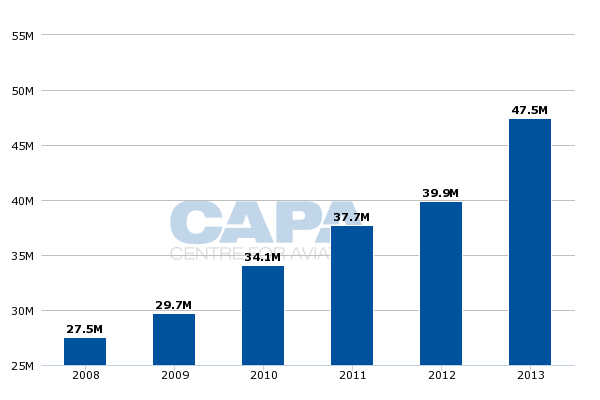 KLIA overtook Shanghai Pudong in 2013 to become the eighth biggest airport in Asia.

Among the top 10 airports in Asia, KLIA was the only airport with double-digit growth. Its 19% growth rate was over double the next highest growth rate of 9% from Guangzhou. 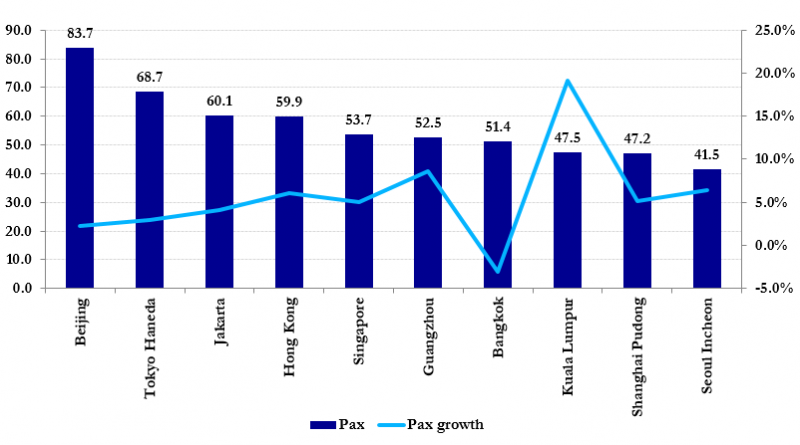 The higher growth at KLIA is partly driven by the lack of space to accommodate growth at most of the other leading Asian airports. The top six airports in Asia all face slot constraints and have generally seen growth rates moderate while KLIA has seen growth accelerate.

As a result KLIA is quickly closing the gap with its two main rivals, Singapore Changi and Hong Kong International (HKIA). Changi saw growth in 2013 slow to 5%, ending three consecutive years of double-digit growth, while HKIA saw growth increase slightly from 5% in 2012 to 6% in 2013. 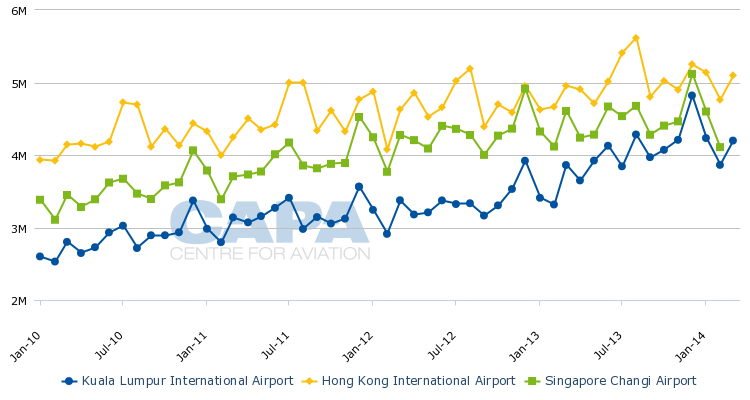 Note: Changi has not yet reported traffic for Mar-2013
Source: CAPA – Centre for Aviation & company reports

MAS has been the biggest driver of growth at KLIA, which is somewhat surprising as much of the attention in the Southeast Asian market over the last year has been on the rapid expansion of LCCs.

MAS grew passenger traffic by 29% in 2013, including 27% in the domestic market and 30% internationally, making it one of the fastest growing flag carriers in Asia. 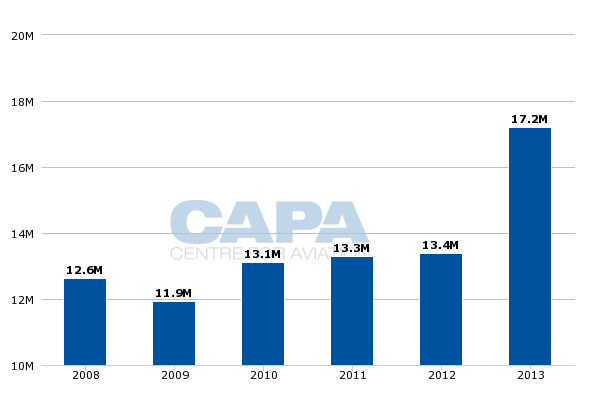 Malindo is a smaller driver of KLIA growth, capturing 4% of domestic market

In the KLIA domestic market, MAS passenger traffic grew by 28% to 5.8 million while AirAsia grew 11% to 8.1 million.

Malindo launched services in late Mar-2013 and in its first nine months of operations was predominately a domestic carrier. Malindo launched 13 domestic and three domestic routes in 2013 although is focusing more on the international expansion in 2014.

While its entry has shaken up the Malaysian market by breaking the MAS-AirAsia duopoly Malindo has not been the main driver behind KLIA’s growth given its still relatively small size. In a strategy shift, MAS at about the time Malindo launched decided to accelerate capacity expansion in both the domestic and international markets.

As CAPA previously reported, MAS was able to achieve rapid capacity growth without significant fleet growth by increasing aircraft utilisation rates, which was made possible as the carrier has rapidly renewed its fleet. The strategy shift also included a major adjustment in its pricing strategy as MAS decided to pursue higher load factors at the expense of yields.

ASKs at MAS were up by another 21% in the first two months of 2014 while RPKs increased by 24%. Passenger traffic for the first two months of 2014 was also up 24%, including 29% in Jan-2014 and 20% in Feb-2014 with roughly similar growth figures in the domestic and international markets. (MAS has not yet reported traffic figures for Mar-2014. AirAsia and AirAsia X only report figures on a quarterly basis and have not yet released data for 1Q2014.)

Markets that have seen capacity expansion from both AirAsia and MAS, such as Malaysia-Australia, have particularly suffered from yield erosion as competition has intensified. AirAsia X has nearly doubled capacity to Australia over the last year while MAS increased capacity by almost 40%. Passenger traffic on the Kuala-Lumpur-Brisbane sector was up 39% in 2013, while Sydney was up 31%, Adelaide 27% and Melbourne 25%, according to MAHB data.

Overall KLIA passenger traffic to and from the Southwest Pacific region (Australia and New Zealand) was up 18% year over year. Southeast Asia international passenger traffic was up by 17%, Northeast Asia by 19% and South Asia by 21%. Europe and Africa had the strongest growth, both at 24%, but on a much smaller base while Middle East had the weakest growth at 14%. The fact every major region saw double digit growth is an indication of KLIA’s growing strength as a hub.

While the 1Q2014 figures have continued along the same trend line as 2013, the rate of passenger growth is expected to slow at KLIA and across Malaysia for the remainder of the year. But KLIA should still see double digit passenger growth for the full year 2014, once again likely beating all other major Asian airports and further closing the gap with its rivals.

The slower growth comes as MAS and AirAsia both slow down expansion. As MAS started accelerating growth around Mar-2014, large traffic increases for 1Q2014 were expected. The carrier’s growth so far this year is predominately driven from capacity added in 2013. It continues to add some capacity but at a much slower rate.

The slowdown in growth at MAS was expected even prior to the MH370 incident. As MAHB pointed out, it is too early to know the impact - if any - on MAS and KLIA traffic as efforts to find the 777 which disappeared in early Mar-2014 continue.

“Due to the current uncertainties surrounding the MH370 event, MAHB remains cautious as to the passenger traffic developments,” MAHB stated in releasing 1Q2014 traffic figures on 11-Apr-2014. “There was some decline in the growth rates towards the last 10 days of March, but the overall positive growth momentum remained. From our analysis of similar, serious incidents in the last 10 years involving commercial aircraft, there was no major impact on international passenger traffic in those airports involved that could be attributed to such incidences.”

Malaysia AirAsia is slowing down fleet growth following the group’s decision to defer seven of its 2014 A320 deliveries and sell six of its oldest A320s by the end of 2014. Malaysia AirAsia now plans to grow its fleet by a net of four aircraft in 2014 for a total of 76 A320s. It added eight aircraft in 2013, but as several of these deliveries occurred in the second half, year over year capacity figures for 2014 should remain in the double digits.

Malaysia AirAsia X also plans to only add three A330s in 2014 for a total of 21 aircraft compared to seven aircraft that were added in 2013. The slower fleet expansion comes as four of the group’s seven A330 deliveries for 2014 are allocated to its long-haul low-cost start-ups in Thailand and Indonesia. But AirAsia X still expects ASKs in the Malaysian market to be up nearly 50% in 2014 as a majority of its deliveries from 2013 were in the latter part of the year. So from a capacity standpoint, growth at AirAsia X will accelerate, fuelling further growth for KLIA.

Malindo also seems to be slowing down fleet expansion. So far in 2014 it has added only one ATR 72-600, giving the carrier a fleet of six ATR 72-600s and six 737-900ERs. While Malindo at one point indicated it was planning to add eight 737-900ERs in 2014, the carrier is now only expected to add five jets. But given the low base, the capacity expansion at Malindo will be significant.

The overall slower growth for 2014 is an encouraging sign for the overall viability of Malaysia’s airline sector as it could result in an improvement in yields and profitability. While Malaysia Airports will likely not repeat the 19% growth from 2013 for the full year in 2014, the market is still vibrant and growing rapidly.

Malaysia has emerged as one of the fastest growing markets in Asia. MAHB is well positioned as Malaysia and the broader Southeast Asian market continues to see rapid economic growth. KLIA’s position and outlook as a hub should also continue to brighten as the airport has the space to grow, particularly after the upcoming opening of the new budget terminal.