Lion Group’s Malaysian affiliate, Malindo Air, is resuming expansion over the next few months as it adds at least three 737s and launches several new international routes. Malindo is expanding in the Indonesia-Australia and Taiwan-Japan markets using fifth freedom rights and is also adding new services from Malaysia to China, India and Vietnam.

Malindo launched operations on 22-Mar-2013 and pursued rapid growth in the first three years. However, over the past two years the airline has cut capacity by around 15% and transferred eight of its aircraft to sister airlines outside Malaysia.

Malindo has significantly reduced its presence in Malaysia’s domestic market and virtually stopped pursuing expansion in Malaysia’s international market. While capacity growth is now resuming, the airline is reducing its reliance on the highly competitive Malaysian market by pursuing fifth freedom routes.

Malindo’s fleet has shrunk over the past two years

Malindo celebrated its five-year anniversary on 22-Mar-2018. The airline has so far carried nearly 30 million passengers but the growth curve has hardly been linear.

Malindo expanded rapidly in its first three years, growing its fleet to 44 aircraft in Mar-2017 and generating more than 210,000 weekly seats. Two years later, in Mar-2019, the airline has a fleet of 41 aircraft, generating approximately 180,000 weekly seats. The 737 fleet briefly peaked at 32 aircraft in 2Q2017 following the delivery of three 737 MAX 8s. Malindo was the launch operator for the 737 MAX 8 but transferred all three aircraft to Indonesia-based Lion Air in 3Q2017. It has since not added any 737s (NGs or MAXs).

Malindo is not impacted by the grounding of the 737 MAX fleet, which has also led to a suspension in deliveries, since the airline does not have the 737 MAX 8 or 737 MAX 9 in its fleet plan. However, as Lion ponders a potential cancellation of its 737 MAX orders the group could adjust its long term fleet plan, resulting in some adjustments for Malindo.

Note: excludes an ATR 72-600 which has been inactive since a Mar-2014 engine fire.
Source: CAPA Fleet Database.

Malindo bases all its ATR 72s at Kuala Lumpur Subang, where it has seven domestic routes and one international route. Malindo has slashed its Subang capacity by 50% since late 2017 – from approximately 30,000 weekly one-way seats to 15,000 seats.

Malindo also has six point-to-point turboprop routes (four domestic and two international), mainly from Malacca. These are all low frequency routes while five of its domestic routes from Subang are high frequency (at least four daily flights even after the cutbacks) and account for most of its turboprop capacity.

There are no jet services at Malacca, which is located only 150km from Kuala Lumpur, or Subang. Malindo bases all its 737s at Kuala Lumpur International Airport (KLIA).

Malindo also currently uses its 737 fleet to operate two point-to-point domestic and nine point-to-point international routes, as well as two fifth freedom routes in the Australia-Indonesia market (as of 22-Mar-2019).

Eight of the point-to-point international routes are less than daily services to China, which are essentially scheduled charters as most seats are block booked by Chinese travel agents. Four of these routes are from Kota Kinabalu, two from Langkawi, one from Kuching, and one from Johor Bahru.

The ninth point-to-point international route is a low frequency charter service from Kota Kinabalu to Sendai in Japan.

Not surprisingly, passenger traffic also declined in 2018. Malindo carried an estimated 6.7 million passengers in 2018 compared to 7.2 million in 2017.

Malindo is resuming domestic capacity growth in the northern summer 2019 schedule. The airline is offering approximately 86,000 weekly domestic seats this summer (from end of March) compared to 75,000 in the first 12 weeks of 2019. Malindo’s domestic capacity is increasing by approximately 15% at KLIA and by 10% at Subang, offsetting some (but not nearly all) of the earlier declines.

Malindo expects total passenger traffic to recover in 2019 and exceed the 7.2 million carried in 2017. It will likely end 2019 with 7.5 to 8 million passengers – depending on how many aircraft the airline adds in the second half.

Malindo has committed to adding three 737-800s over the next few months. The airline is considering more additional 737-800s in 2H2019 but these have not yet been firmly decided.

All the additional aircraft are being transferred from Lion Group’s Indonesia-based full service airline Batik Air.

Batik and Malindo have the same configuration and inflight product. On the 737-800 the two airlines have 150 economy and 12 business with seatback IFE in both cabins. Malindo has also been preparing to adopt the Batik brand, and therefore the 737s that have been transferred from Batik to Malindo still have the Batik tail.

The airline also plans to add more China routes over the next few months, including Johor Bahru to Guangzhou and Kuala Lumpur to Chengdu and Zhengzhou. It has also secured traffic rights for several other Malaysia-China routes, including Kota Kinabalu-Beijing. However, most of the new China services are essentially scheduled charters that are launched if contracts with Chinese travel agents are finalised.

Malindo has not yet started sales for Da Nang, Sendai, Sydney or Varanasi. However, it has secured the required traffic rights and aims to start Sydney services in Jun-2019. The airline has confirmed to CAPA that the other three destinations are also in the network plan for this year.

The new fifth freedom routes are sensible because they reduce Malindo’s reliance on the highly competitive Malaysian market. As the airline resumes expansion it is keen to explore niche opportunities outside Malaysia. Fifth freedom routes will soon account for nearly 10% of Malindo’s total international seat capacity.

Malindo began serving the Bali-Australia market in 2017 when it launched services to Brisbane. It added Melbourne in 2018 and is planning to launch both Adelaide and Sydney in 2Q2019. Adelaide will be served initially with four weekly flights and Sydney will be served daily.

Bali-Melbourne is now served daily but in Feb-2019 Malindo reduced Bali-Brisbane from seven to four weekly services. Malindo currently has 22 weekly services from Kuala Lumpur to Bali, with 11 of these continuing to Australia. The airline plans to have 22 weekly Bali-Australia services in 2H2019.

Almost all of Malindo’s Bali-Australia traffic consists of Australians holidaying in Bali. Its new Taipei-Japan routes will also mainly cater to local traffic in the large and growing Taiwan-Japan market.

Malindo has seven weekly services from Kuala Lumpur to Taipei. Three of these will continue to Sapporo from 23-Mar-2019 and the company has secured traffic rights to continue two of the frequencies to Sendai.

Sapporo and Sendai will be Malindo’s first scheduled destinations in Japan. Malindo is unable to serve Japan nonstop from Kuala Lumpur as it does not have any widebody aircraft.

Malindo was initially planning to add three A330s in late 2017 but the Lion Group reallocated these aircraft to Thai Lion at the last second. Malindo had been intending to use the A330s to serve Melbourne and Sydney – and potentially Japan. Malindo has served Perth from Kuala Lumpur since late 2015, but eastern Australia is not feasible from Kuala Lumpur with narrowbody aircraft.

Malindo adjusted its strategy to expand in the Australian and Japanese markets with one-stop services. The one-stop services are much less risky as they can be served with smaller narrowbody aircraft and most seats can be filled on the second sector with fifth freedom traffic.

India is a key market for Malindo

Da Nang and Varanasi are logical new destinations from Kuala Lumpur, given the growth in the Vietnamese and Indian markets.

Da Nang will become Malindo’s third destination in Vietnam after Hanoi and Ho Chi Minh. Da Nang, a fast-growing holiday destination in central Vietnam, is currently only served from Kuala Lumpur by AirAsia.

Varanasi will become Malindo’s ninth destination in India after Amritsar, Bangalore, Delhi, Kochi, Kolkata, Mumbai, Trivandrum and Tiruchirappalli. Malindo will be the only airline serving Varanasi from Kuala Lumpur.

India has been an important market for Malindo since shortly after the airline launched and is now Malindo’s second largest international market (after Indonesia), accounting for 17% of its total international seat capacity. Although Malindo is unable to expand in Indian metros due to bilateral constraints, it has been active at looking for new secondary destinations such as Varanasi that enjoy open skies.

Indonesia and China are also big markets for Malindo

Indonesia is the airline's largest international market and is growing as Malindo adds capacity between Bali and Australia. Malindo has six destinations in Indonesia, where it is able to leverage Lion’s extensive domestic network.

China is its third largest international market and has been growing, driven by demand from Chinese agents. Malindo currently has eight destinations in China (but only one destination, Guangzhou, is served daily).

Thailand is Malindo’s fourth largest market.  It only serves Bangkok and Phuket in Thailand but is able to offer domestic connections using Thai Lion. 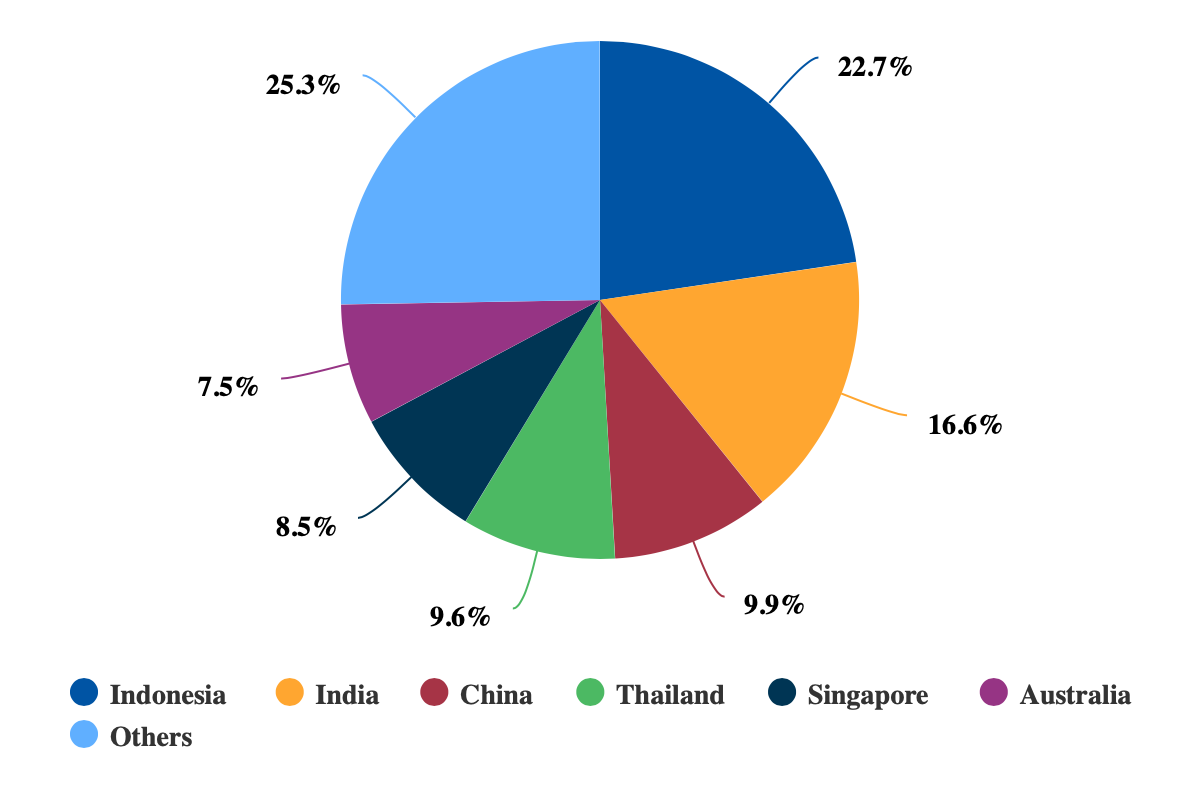 Malindo has the largest international network in the Lion Group. While the airline has slowed international growth over the past year – and for a few months it even cut capacity slightly – it has generally pursued rapid expansion in the international market since launching international flights on 28-Aug-2013 (five months after starting domestic operations).

The adoption of a full service network model three years ago has enabled Malindo to attract sixth freedom traffic as well as interline and codeshare partnerships, helping to support its earlier international expansion phase.

However, Malindo’s expansion has not been all smooth sailing. Over the years Malindo has suspended nearly as many routes as it currently operates and it has not yet turned the corner to become profitable.

Malindo still has challenges to overcome

The hiatus in expansion over the past two years was aimed at consolidating Malindo’s position and improving profitability. This was a necessary phase in Malindo’s development, although it resulted in market share declines – primarily to AirAsia and particularly in the domestic market.

As it resumes expansion, Malindo’s reliance on fifth and sixth freedom traffic should help alleviate any impact. However, it will still not be easy to achieve profitability, given the intensifying competition in Malaysia and the broader Asia Pacific market.

As it celebrates its fifth birthday, the airline should start thinking about its long term position and identifying a sustainable niche. Malindo is competing in a very challenging marketplace that is not about to get any easier.