Malaysia Airlines (MAS) reported a heavy loss in 2Q2011 (three months to 30-Jun-2011) as soaring costs, led by fuel, weighed on the result. The 2Q2011 loss is MAS’ second-consecutive quarterly loss and the carrier expects to remain in the red for the rest of the year.

The deteriorating operating performance reflects the sharp increase in operating costs, led chiefly by fuel, which surged 41% in the period, and a weaker cargo performance, which pushed the airline deeply into the red. MAS’ operating margin for the quarter was -12.0%.

Various initiatives will be undertaken to reverse MAS’ woes. Most notably, MAS has announced a tie-up with Malaysian LCC powerhouse AirAsia and its long-haul offshoot AirAsia X, the airline grouping largely responsible for MAS’ struggles over the past decade.

MAS said its board “has identified immediate priorities to focus on in the short-term”, aimed at stemming losses. “Working with the new executive committee…recovery initiatives will be implemented to turn the company’s fortunes around and to start rebuilding cash reserves,” which have fallen sharply in 2011. Immediate initiatives will include, among others, more prudent capacity management, implementing new dynamic pricing to improve yields and revenues and a review of products and brand positioning.

Revenue up, but costs neutralise gains

MAS recorded an 8.5% increase in top-line revenue to MYR3,429 million (USD1.17 billion). Revenue gains were, however, neutralised by soaring costs, which increased 11.4% in the period to MYR3,897 million (USD1.31 billion), which pushed the airline deeply into the red for the quarter. 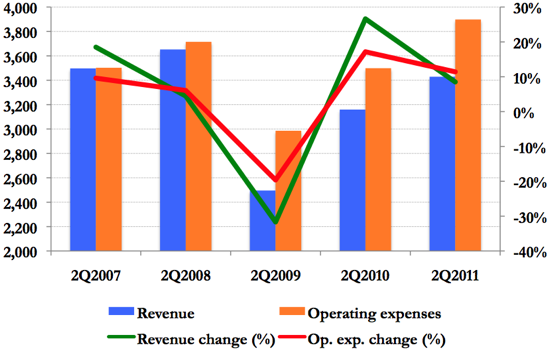 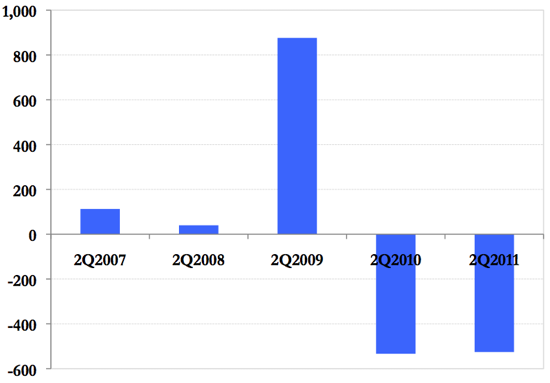 Cargo revenue however was much weaker in the period, reflecting the lower year-on-year trade volumes seen in the region, which was skewed by the replenishing of global restocking of inventories in early 1H2010 following the global financial crisis. Total cargo revenue fell 16%, led by a 24% fall in belly and freighter revenue. The cargo segment’s fuel surcharge, which increased 6.6% to MYR145 million (USD48.5 million), helped mitigate the sharp fall in cargo revenue.

But spiralling costs significantly outweighed revenue growth. Operating costs increased 11.5% to MYR3,987 million (USD1.31 billion). Fuel, unsurprisingly, led the rise in costs. Fuel costs surged 41% in 2Q to MYR1,550 million (USD519 million), to account for 40% of total operating costs, up from 30% in 2Q2010. The sharp fuel price rise masks what would otherwise have been an impressive cost performance in 2Q2011, with non-fuel operating costs down 2%, reflecting MAS’ aggressive and consistent cost control measures.

Since the end of 2Q2011, a major strategic development has taken place as MAS forged earlier this month a tie-up with rival AirAsia, which has moved aggressively into MAS’ short-haul, regional, and more recently, its long-haul markets. Khazanah, a national investment vehicle and majority shareholder in MAS, purchased a 10% stake in AirAsia from Tune Air, as part of a cross-equity deal. Khazanah will also purchase a 10% stake in AirAsia X. Tune Air, the largest shareholder in AirAsia and the investment vehicle of CEO Tony Fernandes, acquired a 20% stake in MAS from Khazanah.

A Joint Collaboration Committee (JCC) was formed on 09-Aug-2011, which will look into key areas for collaboration to realise synergies and cost efforts, MAS says. MAS and AirAsia aim to cooperate in areas such as engineering and ground support, aircraft purchasing, catering and training and cargo services.

The Malaysian government said the agreement would end cut-throat competition between the airline groups, allowing them to grow together and more profitably than would otherwise be the case. Mr Fernandes said the deal allows his airline to focus on growing the business, “as opposed to spending a lot of time on politics and fighting unnecessary battles”. The collaboration should also boost yields for both airlines.

Better market segmentation should also be achieved under the deal, with one partner targeting the low-cost, leisure market and the other, the higher-yielding and premium market. Firefly, MAS’ LCC subsidiary, also recorded heavy losses in 1H2011 and will be re-structured to focus on the short-haul premium travel space using turboprop equipment. MAS said a longer-term solution for Firefly would be developed by the management team to put the airline on course for sustained profitability.

While Firefly will retain its ATR-72s, the carrier's B737 fleet is expected to be transferred to the new regional, full-service airline, Sapphire. But it remains unclear how MAS, which also has a regional carrier unit in east Malaysia with ATR-72 operator MASwings, will juggle so many brands. Of particular interest will be how the Sapphire unit differs from MAS' existing regional narrowbody services.

MAS, in releasing its 2Q2011 earnings, also said its multi-year re-fleeting programme will be accelerated. As of mid-Aug-2011, the airline has taken delivery this year of five new B737-800s and five new A330-300s. Over the next four months, MAS will take delivery of six more aircraft – two B737-800s, two A330-200Fs and two ATR-72s. Excluding these aircraft, MAS’ order book comprises 38 B737-800s, ten A330s, six A380s and two A330-200Fs. The airline said its fleet delivery schedule would be accelerated in the next few years, adding that all required financing activities for 2012 have been completed.

MAS expects a weak second-half due to elevated fuel prices and sovereign debt fears in key markets which will continue to weigh on consumer confidence and economic growth. The airline’s forward bookings indicate challenges in the European, US and Japanese markets, with “normal” trends for other regions. The third quarter will be soft owing to the month of Ramadan, when travel is seasonally slow.

In response to the challenging outlook, MAS will moderate its capacity growth in 2H2011. The airline will also review its route network and adjust capacity accordingly. MAS will retire two B747-200Fs, one B747-400 and three B737-400s by Oct-2011.

The airline will also have a heavier focus on yield management, with new revenue systems to be introduced in 2H2011. MAS aims to enhance its yield performance through front-end business class initiatives, implementation of fuel surcharges and step up its yield/revenue management.

A loss in 2H2011 is still expected, though MAS said it would be less severe than 1H2011, due to these initiatives.

MAS’ most significant turn in fortunes is likely to come from its tie-up with AirAsia, a deal that effectively neutralises a major competitor and a leading cause of losses in recent years. Under the agreement, MAS also gains two successful and experienced aviation executives on its board, in Tony Fernandes and AirAsia deputy CEO Kamarudin Meranun. This expertise at senior management level should help MAS overhaul its network, alliance and fleet strategies and navigate the flag carrier through some more desperate times.