LATAM also faced headwinds triggered by the FIFA World Cup soccer tournament held in Brazil during Jun-2014 and Jul-2014 as typical demand patterns were upset by many Brazilians opting to remain home for the matches, along with a decrease in corporate demand.

Although the knock on effects of soft demand from the World Cup are temporary, LATAM’s challenges in other markets could linger at least for the short term. Given the overall weaker conditions in most of the company’s geographies, its aspirations of achieving investment grade status may not materialise until CY2016 at the earliest, about four years after the merging of LAN and TAM to create LATAM Airlines Group. 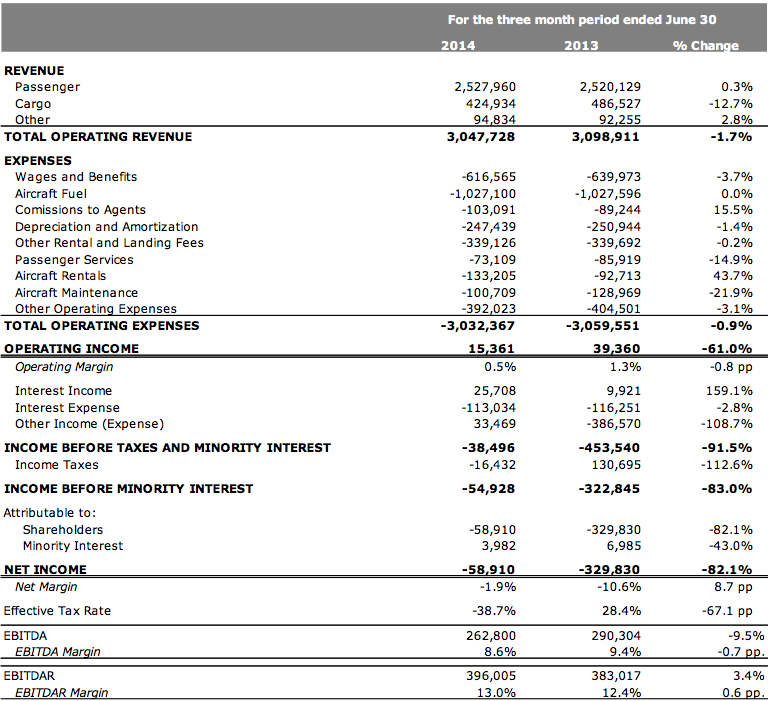 Prior to the start of the World Cup, TAM cut its capacity in Brazil by 5% in Jun-2014. The cuts allowed TAM to garner high load factors even as traffic decreased by roughly 5% in Jun-2014 when domestic and international leisure demand dropped off. Despite the challenges that LATAM and other Latin American airlines encountered due to changing demand patterns resulting from the soccer tournament, LATAM’s unit revenues within Brazil increased nearly 3% during 2Q2014.

The favourable performance is also a result of the restructuring of TAM’s Brazilian operations during the past year that has included a pull down in capacity and ensuring it maintains a leading position with corporate customers. 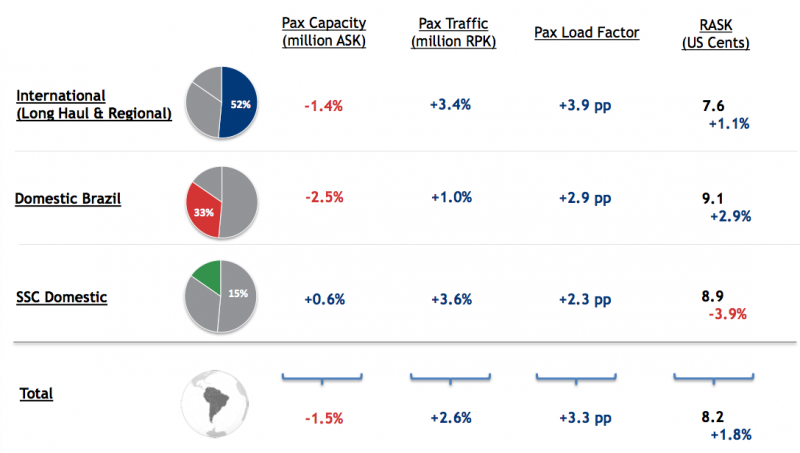 LATAM estimated that the changes in demand stemming from the World Cup is affecting its operating margin by USD140 and USD160 million in Jun-2014 and Jul-2014, with USD30 million recorded in Jun-2014. The result is most of the pressure will flow through in Jul-2014, creating some headwinds for LATAM during 3Q2014.

Company executives explained that July is typically a strong month for both leisure and corporate travel, so that is the driver for the bulk of the negative effects from the World Cup occurring during that month. Panama’s Copa Airlines has made similar conclusions, noting that the different demand patterns in Jul-2014 would create some pressure on its 3Q2014 performance.

LATAM’s operating margin for 2Q2014 fell 0.8% to 0.5%. But the company believes it can achieve margin expansion in 4Q2014 as demand patterns are more normalised.

Macroeconomic woes and currency devaluation continue to drag down LATAM

During 1H2014 LATAM has faced pressure from currency devaluations in most Spanish speaking countries, which coupled with slowing economies has created yield pressure in those regions.

LATAM recorded a 3.6% increase in domestic traffic in Chile, Peru, Argentina, Colombia and Ecuador during 2Q2014 as capacity remained essentially flat. But even though load factors jumped 2.3ppt in those regions unit revenues fell nearly 4% as yields remained under pressure.
The IMF projects GDP growth in Latin America of 2.5% in CY2014, which is slightly lower than the 2.75% increase included in previous forecast.

LATAM executives noted that GDP growth targets have decreased in Brazil, Chile, Peru and Argentina. The company estimates a 14% depreciation in Chile’s currency, and a 54% decline in Argentina’s currency.

During the past year LATAM has been working to mitigate its exposure to the falling BRL on its balance sheet, and as of Jun-2014 had cut its BRL exposure to USD1 billion from more than USD2 billion the year prior. It has also hedged its monthly exposure to the BRL in 2014 at an average rate of BRL1 to USD2.37.

But given legacy TAM’s exposure to the BRL, the devaluation of the Brazilian currency has more of an impact on LATAM’s financials and balance sheet. LATAM estimated that approximately one-third of its revenues and 27% of its costs are denominated in the BRL.

In Argentina and Chile, there is no imbalance in revenues and costs on LATAM’s financials with respect to currency fluctuations. The pressure on LATAM from the currency depreciation in those countries occurs in the fall off in demand and resulting effects on yields. Presently, LATAM estimates that yields in Argentina are down 8% year-on-year. The company concluded the sudden devaluation of Argentina’s currency has affected international travel, with tickets in that segment generally priced in USD, resulting in higher costs for Argentinians to travel.

LATAM noted that the Chilean COP has remained more stable in 2014 with the bulk of currency devaluations occurring in Jan-2014 and Feb-2014, but demand is being affected by the country’s macroeconomic weakness and political issues. A slowdown in the country’s mining industry has contributed lower GDP growth projections in Chile from 4% to 3% in CY2014.

LATAM cuts capacity to Venezuela as it works to repatriate funds

During 2Q2014 LATAM recorded a one-time USD56 million charge stemming from the adjustment in the exchange rate of cash it has frozen in Venezuela to Sicad I, which is roughly VEF11 to USD1. In the quarter LATAM accepted a proposal by the Venezuelan government for repatriation of the company’s roughly VEF930 million tied up in the country.

LATAM had recognised that cash on its balance sheet at a rate of VEF6.2 to USD1, but the government in its repatriation proposal set the Sicad I parameters.

LATAM’s passenger yields fell 2.3% year-on-year in 2Q2014 driven by the pressure in its Spanish speaking countries. Its unit costs excluding fuel increased 3% year-on-year driven in part by a 1.5% decline in system capacity.

For FY2014 LATAM Airlines Group projects a 4% to 5% operating margin on a capacity range of flat growth to a 2% decrease. That forecast is a downward revision from previous guidance of a range of 6% to 8%, driven by lower revenue during the World Cup and weaker economic growth in Latin America. Its revised margins are in line with the 4.9% operating margin LATAM recorded in CY2013.

LATAM Airlines Group ended 2Q2014 with roughly USD1.7 billion in liquidity, which is roughly 13% of its 12M trailing revenues. Its leverage ratio (measured as adjusted net debt / EBITDAR) was 5X. The company’s long-term goal is a ratio 3.5X to 4X and a liquidity position of 15% of trailing 12M revenues. 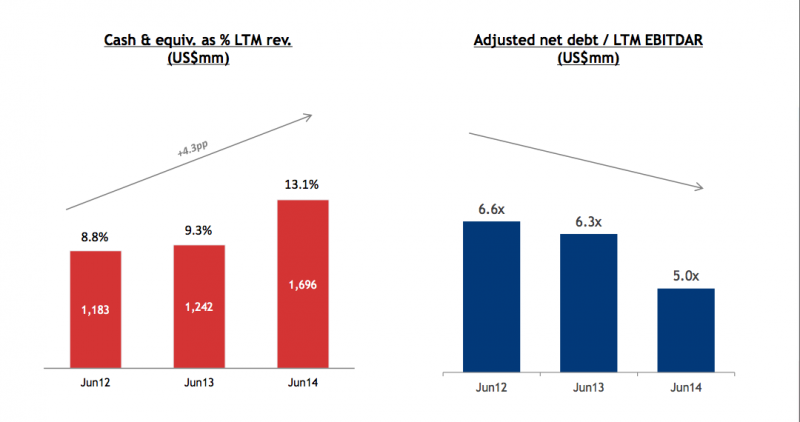 Company executives fielded questions regarding its leverage ratios not being ambitious enough to obtain an investment grade credit rating. Prior to the merger, legacy LAN held that status.

LATAM management concluded its targeted ratio is what it sees as investment grade level if it is coupled with healthy margins, solid cash generation and the right liquidity levels. However, LATAM believes that attaining investment grade status is something it will not achieve in the short term, remarking it was a “2016 event or further out”.

Logic dictates that a diversified geographical network and enhanced market power should create net benefits for an airline to withstand weakness in one region due to relative strength in other geographies.

But that has not been the case for LATAM as many of its domestic markets have come under pressure from macroeconomic sluggishness. Current projections indicate a slight improvement in GDP growth for Latin American to 3% in CY2015; but the weakness that LATAM is experiencing in its markets is likely to carry over into early 2015.

With effects from the World Cup lingering into 3Q2014 and continued yield pressure from declining demand, LATAM faces a challenging 2H2014. Those challenges are likely to continue into 2015 as LATAM works to maximise the benefits of its merger in an ever-increasing tough operating environment.