LOT – Polish Airlines narrowed its year-to-date losses (nine months to 30-Sep-2011) amid difficult trading conditions this year. The improved performance is part of the carrier’s plans to improve its financial position ahead of privatisation, which is now expected in 1H2012.

While LOT has been hard at work on its restructure, LCCs have been eyeing the Polish market. Wizz Air and Ryanair, the second and third-largest airlines in Poland behind the national carrier, have been making moves to take a larger slice of the market. Ryanair recently stepped up its campaign, announcing plans to launch its first Polish base in Wroclaw, which, along with Wizz Air’s presence could threaten LOT’s new strategy.

LOT reported a loss of EUR11.9 million in the nine-months ended 30-Sep-2011, nearly halving the EUR22 million loss in the previous corresponding period. The result was bolstered by strong growth in revenue and passenger numbers and prudent cost control, which has been a key focus of new CEO Marcin Piróg as he prepares the airline for privatisation and more aggressive LCC competition. The after-tax profit for the three quarters was EUR1.2 million, adjusted for fluctuations in exchange rates. 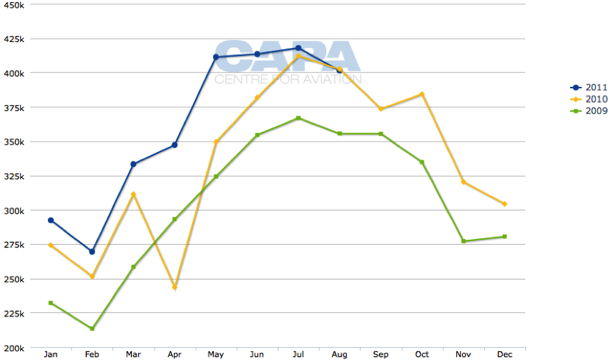 Revenue increased 6% in the nine-month period, outpacing the 4% increase in total operating cost. This slight cost increase is particularly impressive in light of a 27% spike in the cost of fuel in the period, demonstrating the hard work LOT has been doing to bring down variable costs.

Improving LOT’s financial profile ahead of privatisation, which could include an IPO or strategic investment, has been the major task for Mr Piróg. He has been largely successful at doing just this in 2011 and previously stated that if it were not for the fuel price spike this year, the airline would be in the black. LOT lost EUR160 million in 2010 (a year of record airline profitability), but due to key structural changes the airline expects a much narrower loss this year, despite the more difficult trading conditions.

Under its new management team, LOT is developing a new “east meets west” hubbing strategy, which Mr Piróg discussed with CAPA in Jun-2011. LOT’s strategy is a common one being pursued by airlines seeking to better leverage their geography and bolster sixth freedom operations. Best demonstrated by long-haul giant Emirates, the strategy has become commonplace, albeit on a smaller scale in Europe, with Icelandair, Aer Lingus, Finnair, Turkish Airlines and airBaltic all pursuing broadly similar strategies. In LOT’s case, it is seeking to tap into the increasing trade, capital and tourism flows between Eastern and Western Europe. The Star Alliance member is also seeking to become a larger player in Eastern Europe’s clearly underserved long-haul market, with new services into emerging Asia and North America.

The arrival of B787s, which will replace LOT’s ageing and relatively inefficient B767s, will be of enormous benefit to the carrier’s growing long-haul network. LOT expects to take delivery of its first B787 in mid-2012, making it the first European carrier to operate the new aircraft. This novelty factor alone should add value to LOT and could allow the airline to command long-haul yield premiums, as other airlines have enjoyed with new age equipment. LOT expects to have five B787s by 2013.

Differentiating itself and adding value through an enhanced long-haul and transit offering will be of increasing importance as short-haul pressure on LOT is likely to grow considerably.

Wizz Air and Ryanair are both nipping at LOT’s heels in the Polish market and are not far behind the Star Alliance member in terms of market share. 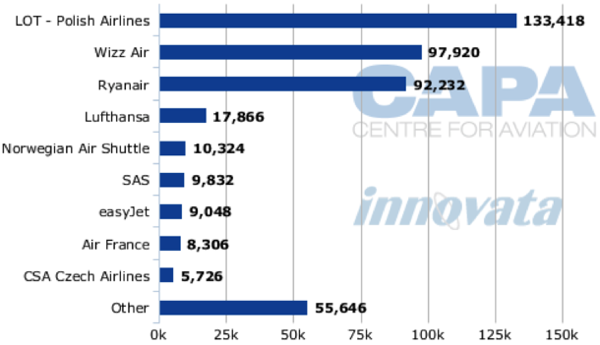 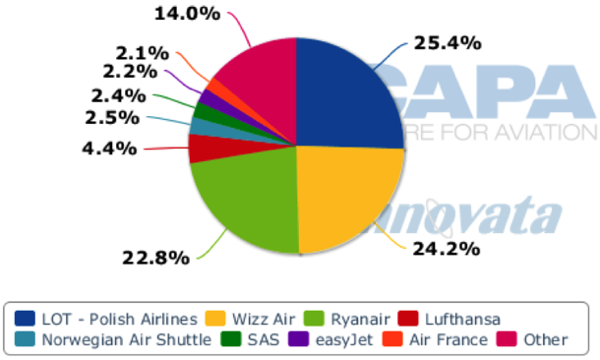 Wizz Air, the country’s second largest airline, has a particularly strong, and growing, presence in Poland. The Budapest-based LCC has particular strength at Warsaw, Gdansk and Katowice, where it is by far the largest carrier at the latter two airports. Unlike LOT, however, Wizz focuses purely on O&D routes between Poland and Western Europe. The LCC offers little to no connections between Poland and Eastern Europe.

Despite Wizz’s Eastern Europe origins and bases scattered across the region, its lack of connections to Eastern Europe from Poland is certainly interesting, although in line with the rest of its network. With LOT’s new focus on drawing in traffic from surrounding countries, particularly from those underserved regions to Poland’s east, Wizz could be lured into an eastward expansion.

LOT, however, is familiar with competition from Wizz as the LCC has had a heavy presence in Poland for several years. Ryanair, who has far greater international scale than Wizz and arguably competes with more aggressiveness, is likely to be of more concern to LOT management and a larger threat to the Polish carrier’s new short-haul strategy. Ryanair’s entrance will also alarm Wizz, as the two will overlap on several routes from Wrocław.

The Irish LCC has announced Wrocław in south-west Poland will be its first Polish base, only its second in Eastern Europe (behind Lithuania’s Kaunas) and its 46th European base overall. Ryanair will launch the base at the airport in spring 2012. Wrocław is the country’s fifth-largest airport and handled 1.7 million passengers in 2010, a 21% year-on-year increase. Ryanair already has a significant presence at Wrocław where it is the largest carrier, ahead of LOT and Wizz Air. In Poland, Wrocław is currently Ryanair’s second-largest market, behind Katowice, where it does not claim a base. 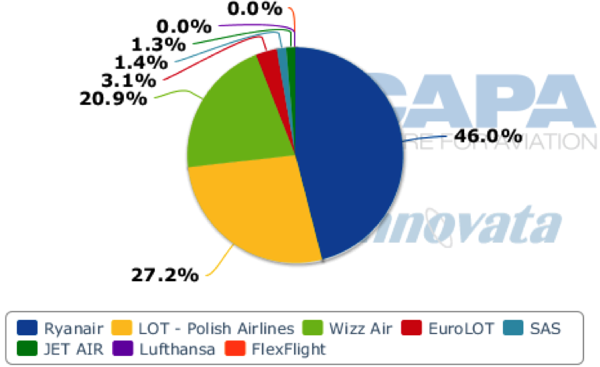 Ryanair will base one aircraft at Wrocław, with plans to initially handle 800,000 passengers per annum to the airport. If the base is successful, Ryanair is likely to ramp up operations like it has done in Kaunas, the LCC’s only other Eastern European base. The Lithuanian airport’s traffic has skyrocketed since the launch of Ryanair’s base there.

Poland’s domestic market is likely to be of interest to both Wizz Air and Ryanair, owing to LOT’s monopoly on domestic routes. Poland has previously been an unattractive market for Ryanair due to what the LCC considered excessive air navigation charges, however, the news of a base in Poland could be viewed as Ryanair's progress on this front.

Owing to LOT’s monopoly in the domestic market, there are essentially no LCC services. In the Jan-Oct period in 2011, LCCs offered just 0.2% of domestic seats. 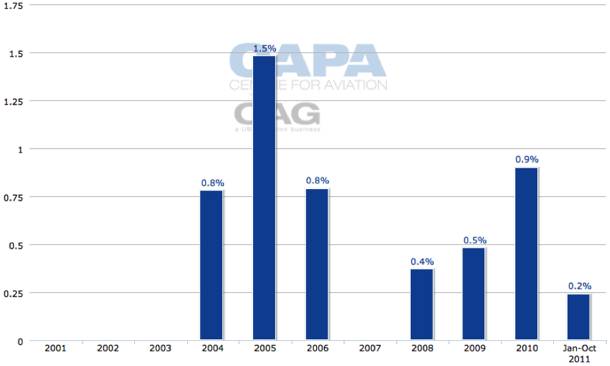 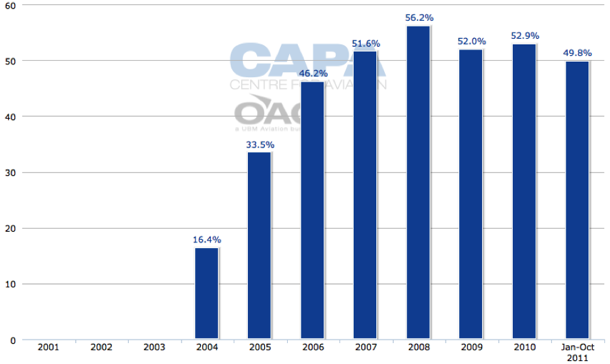 While LOT’s year-to-date results are a sharp improvement from last year’s and are a strong result in light of the more difficult trading conditions in 2011, it remains to be seen whether significant change, most importantly, significant cost reductions, can be passed through ahead of increased competition from more efficient LCCs.

LOT has made good progress in modernising its fleet and in the selection of more conservative equipment, the result of aircraft retirements and a re-evaluation of its network. The airline has 35 aircraft in its fleet, 25 of which are young, fuel-efficient E170s/175s/195s, forming the backbone of LOT’s short-haul operation. The Embraers allow cost savings through fleet commonality. Only five B737s, all Classics, remain in the fleet. Without doubt the ongoing delays in the delivery of B787-8s has hurt LOT. It still has five ageing B767-300ERs on its books, which the airline originally planned to start taking out of service in 2008 after the arrival of B787s. While competition for long-haul services out of Eastern Europe remains thin, expanding in the long-haul space is a key part of LOT’s new strategy and its improved performance has been repeatedly pushed back.

A new strategy, a young fleet, sharply lower costs and a new network will be key in turning LOT around and helping it face the growing LCC threat, many of which regard Eastern Europe as a region ripe for growth.