Load factors improve at WestJet; Garuda to launch an LCC; AirAsia X to be profitable in FY2009

WestJet reported a sixth consecutive year of record January load factors in Jan-2010, with load factors gaining 2.0 ppts to 78.8% in Jan-2010. The load factor occurred as the carrier’s 6.9% capacity (ASMs) increase was more than matched by a 9.7% increase in traffic (RPMs). The LCC, while not disclosing monthly traffic numbers, stated it transported 74,000 additional passengers in the month.

Tiger Airways’ shares gained 4.1% yesterday, as the carrier announced another advance delivery agreement with Airbus. Four A320 aircraft, originally scheduled to be delivered to the newly-listed LCC in 2016, will now be delivered in 2011.

These are in addition to the five aircraft that will be delivered later in 2010 and early 2011, ahead of their original delivery dates in 2016. Currently, the carrier's fleet comprises 18 aircraft, with one more to be delivered in Feb-2010. The fleet will increase by 74% to 33 aircraft over the next two financial years (April to March), with a total of 14 aircraft deliveries.

Garuda Indonesia to launch an LCC in 2010

Also in the region, Garuda Indonesia is considering plans to launch a separate LCC subsidiary, Citilink, by the end of 2010, due to growing demand in domestic and short-haul international markets. CEO, Emirsyah Satar, stated the carrier would operate approximately 20 aircraft, including some of Garuda’s older B737s.

Meanwhile, AirAsia X CEO, Azran Osman-Rani, stated the carrier is confident it will report a small profit for FY2009, for the first year of profitability since the carrier’s launch almost three years also.

Mr Osman-Rani told Malaysia Business Times that the carrier tripled its business in the first nine months of 2009, with the carrier ending the year with a “phenomenal” Dec-2009. He added, “we are happy we survived…I believe that once the numbers are tallied, we will prove that we really do have the lowest unit cost per available seat kilometre at US0.03 in 2008 and 2009...even with fuel being what it was”.

The carrier is now looking into proposals for the financing of four aircraft to be delivered this year. 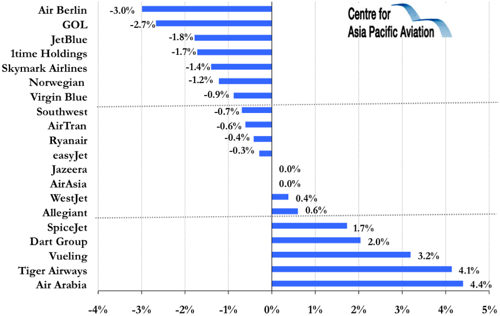