Libyan African Aviation Holding Company (LAAHC) Chairman, Sabri Shadi, stated Libya's two state-owned carriers, Afriqiyah Airways and Libyan Airlines, are hoping to gain government approval in Oct-2010 to merge, stating: "The decision will be announced by around mid-October ... Afriqiyah and Libyan Airlines will be one company."

The two carriers have been in negotiations regarding a merger for several years but the plan has been repeatedly delayed.

LAAHC added that it is also working to modernise the fleets of the two carriers with the acquisition of a number of new aircraft by the end of 2012. The company reportedly stated the contractual value of modernisation of the two carrier's fleet would be USD5.5 billion.

Libyan Airlines, separately, confirmed it has taken delivery of its first new A320 aircraft from Airbus. The new aircraft, the first of seven on order, is powered by CFM engines and will be equipped with On Air in-flight connectivity. The aircraft will be operated on domestic and regional routes from the airlines hub in Tripoli. The aircraft is configured in a two-class configuration with 156 seats (32 business and 108 economy).

Also in the region Air Zimbabwe announced plans to acquire two A340-200 aircraft for approximately USD400 million, with the aircraft scheduled for delivery before the end of 2010. The new aircraft will service long-haul routes – mainly China and the UK.

Among the listed African carriers, Kenya Airways stated it is in the process of implementing the IATA electronic cargo platform 'E-Freight' to increase the efficiency of its operations. The carrier added that it witnessed tonnage growth of 14% in 1Q2010 to 12,762, coinciding with a recovery in global cargo demand.  Shares in Kenya Airways gained 1.1% on Friday.

Air Arabia to operate from five Moroccan airports to Europe

Shares in Air Arabia, meanwhile, increased 1.2% on Friday. The carrier has announced details of services between Morocco and Europe for the winter season.

In addition to its primary base at Mohamed V International Airport in Casablanca, the airline will also operate from Nador, Fez, Tangier and Oujda airports with a frequency of 16 weekly from the five Moroccan cities to Brussels, Amsterdam, Cologne, Paris and Montpelier. The carrier separately announced plans to increase Sharjah-Kathmandu frequency from 31-Oct-2010.

In the Middle East, Kuwait National Airways (Wataniya) like Air Arabia, has announced plans to further expand its services, with the carrier announcing details of its 2010/2011 winter flight schedule, effective Nov-2010.

It includes the continued expansion of services to Vienna, Istanbul, Sharm El Sheikh and Bahrain, improved departure times for services from Kuwait to Amman, and maintaining the regular three times daily service to Dubai. Shares in the carrier declined 3.5% on Friday, prior to the announcement. 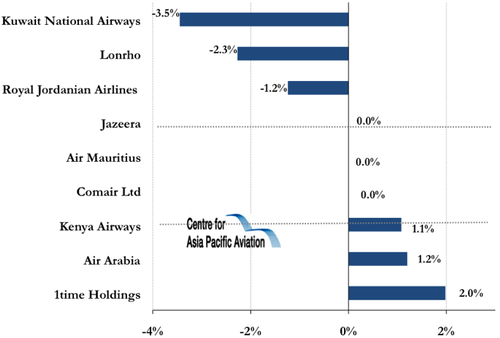