JetBlue has spent most of 2014 defending its business model to shareholders and equity analysts that are growing increasingly impatient over rewards, and in some cases are pushing the airline to steer its strategy away from its historically customer friendly philosophy.

Wall Street is having trouble comprehending the customer “sweet spot” JetBlue is targeting – and which for that reason is a tough segment to quantify. As JetBlue transitions, it isn't generating the sort of returns the analysts are lusting for.

In other areas JetBlue seems to be making all the right moves – driving down costs, boosting ancillary revenue, and building up its network in areas where it holds strength and quickly builds profitability – Florida and the Caribbean.

All those elements appear to be a logical plan of action; but JetBlue still finds itself on the defensive, and may find itself stuck in that position for the short to medium term. CEO Dave Barger is meanwhile sticking to his guns. The new formula will take time to stick with passengers though; hopefully they will agree with his market perception of what they want.

JetBlue has started offering a more refined definition of its passenger segment, outlining to analysts that the customer sweet spot is comprised of a powerful leisure segment, the infrequent traveller and the “customers underserved by the low cost discounters”, JetBlue recently declared.

The airline concludes that in markets where it competes with those ultra low cost airlines such as Spirit, it garners customers tired from being nickel and dimed that are willing to pay a little more for JetBlue’s unlimited snacks, roomier seats and some free satellite television content and Wi-Fi. 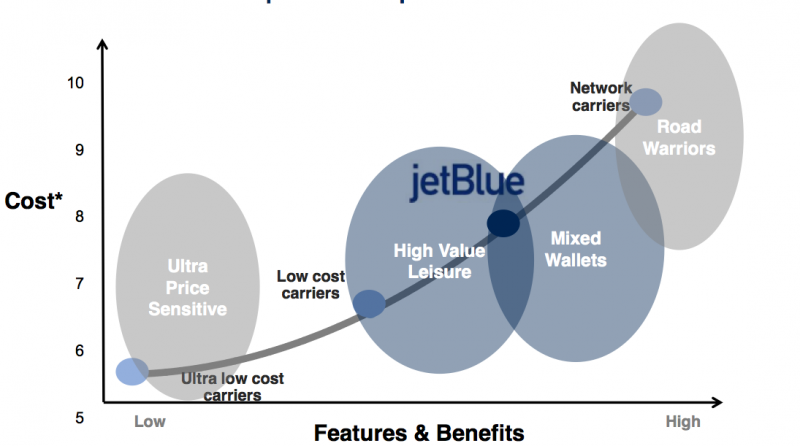 JetBlue has put that logic into practice during the last couple of years in Spirit’s base in Fort Lauderdale, where it presently offers roughly 65 daily departures. It has a set goal to increase its daily departures from the South Florida city to 100 in three years.

JetBlue’s stated targeted passenger segment also includes the customer that takes one-to-two vacations per year and travels a similar amount for business on an annual basis. The airline concludes those underserved passengers will not be rewarded by large network airlines from a loyalty perspective, but gain some rewards with JetBlue. Its loyalty scheme allows family pooling of points, no expiration of points and no blackout dates.

Conceptually, JetBlue’s targeted passenger segments seem logical, and its consistent profitability (17 consecutive quarters of profits) shows that its strategy seems sound. For the first seven months of 2014 JetBlue recorded a nearly 4% rise in traffic in 4% capacity growth. Its load factor remained essentially flat at a strong 85%.

But the “sweet spot” that JetBlue often touts is apparently too abstract for the analysts, and hard to quantify. Those are also arguably passenger segments that airlines adopting all types of business models target. Even though Spirit airlines repeatedly states that its low-yielding passenger base is unattractive to large network airlines, American Airlines recently declared it keeps an eye on Spirit’s movements, and in the past Delta has attempted to selectively match Spirit’s fares on some routes.

JetBlue’s product proposition is spot on for its targeted customers, but the ultra low cost operators and network airlines are not totally abandoning travellers looking for medium frills value, making the competitive advantages JetBlue often promotes hard to grasp.

Cost creep has been a mainstay for JetBlue during the last couple of years, reflected in its 5.6% increase in unit costs excluding fuel and profit sharing during 1H2014 to USD7.8 cents. In 2Q2014 its unit costs increased 5% to USD7.51 cents.

Although JetBlue believes its unit cost sits sit properly in the middle of network airlines and ultra low cost operators, news outlet Fortune recently highlighted the airline’s profit margin for the trailing 12 months excluding one-off charges and special gains was 3.3% compared with roughly 6% for Delta and Southwest and 12% for Spirit.

Even as Fortune concluded that JetBlue’s strategy has many positive attributes, and warned that some changes pushed by Wall Street could result in revenue degradation, margins speak loudly to equity investors and analysts.

JetBlue admits that while in its strongholds in Florida and the Caribbean it tends to outperform its peers in passenger unit revenue on a regular basis, overall it slightly under-performs its peer group in that metric by 1% to 2%.

The airline has a plan to shore up its revenue driven by a push of ancillary sales driven by its “Even More” product offering that includes extra legroom, priority boarding and expedited security where available and through the introduction of new Fare Families during 1H2015.

JetBlue forecast that revenue from sales of Even More should reach USD190 million in CY2014, and its overall ancillary revenue should increase 10% to 15% from the USD670 million recorded in CY2013. The airline also has technology in place to dynamically price its Even More offering by market and time of day, which should create improved leverage for JetBlue for Even More, which the airline already deems as high margin revenue.

Not surprisingly JetBlue also believes there is ample revenue upside to its “high value geography” as a larger percentage of its routes have reached maturity. The airline estimates that in 2014 approximately 84% of its network will have a maturity level of three years or greater compared with 63% in 2008.

During 2014 JetBlue is leveraging 12 slot pairs at Washington National that it acquired from American Airlines and US Airways in order for those airlines to gain US government approval for their merger. JetBlue concludes that National is a high fare, slot constrained. environment where it can offer more competitive fares, stimulate demand and “effect competitive change”.

The airline’s markets from National fit the profile of a quick spool-up, and should, in theory, only take roughly year to make a positive contribution to the airline’s network. Generally JetBlue believes it makes a profit faster in its markets in Florida and the Caribbean than traditional domestic US markets.

One of the largest drivers in JetBlue’s effort to drive down unit cost is the upgauging of its fleet to higher density Airbus A321s. CAPA’s fleet database shows that as of 5-Sep-2014 the airline had nine of the larger jets in operation and 44 on order. It also has 30 Airbus A321neos on order.

Source: CAPA Fleet Database
Firm orders include those placed directly by the operator and by lessors assigned to the operator, from 1-Sep-2014 onwards

Eleven of the A321s will feature the new Mint premium product JetBlue debuted earlier in 2014 on transcontinental service from New York JFK to Los Angeles. Mint flights to Los Angeles start in Oct-2014.

The A321s featuring Mint are configured with 159 seats compared with 150-seat on JetBlue’s existing A320s. It estimates that the higher density A321s are already producing the expected 10% to 15% unit cost benefit, and forecast that by YE2018 18% of its fleet will be comprised of A321s, which should create a positive CASM benefit. The new generation engine powering JetBlue’s A321neos is also estimated to generate a 16% fuel savings when the aircraft is delivered in 2018.

But three years can seem like an eternity to investors hungry for substantial rewards, so JetBlue’s cost inflation will continue to be under scrutiny until it can record substantial decreases. It is projecting unit cost growth of 2.5% to 4.5% for CY2014 driven largely by a deal it reached with pilots that includes a 20% increase on base rates during the next three years, which equates to USD30 million in 2014, USD50 million in 2015 and USD65 million in 2016.

JetBlue reached the agreement with pilots before a decision by that work group to unionise with the Air Line Pilots Association. At some point new negotiations will commence, and JetBlue could face a scenario where it may have to further increase its pilot salaries, or agree to work rule concessions that could continue to drive some cost pressure.

JetBlue works to de-lever, a common occurrence among US airlines

At the same time JetBlue is working to beat back cost creep, the airline is also has undertaken efforts to reduce high coupon debt and use its cash in ways more beneficial to generate a return on invested capital (ROIC).

The airline’s cash position at the end of 2Q2014 was USD627 million, compared to USD1.2 billion to 1.3 billion a couple of years ago. JetBlue explains it has taken steps to right size its liquidity, concluding that having those higher levels of cash “sitting on the bank earning 20 basis points” is essentially a drag on ROIC. JetBlue has opted to use some of its cash to invest in the business while also opting to reduce its leverage.

It used some proceeds of the sale of its LiveTV subsidiary completed earlier in 2014 to pay down USD300 million in debt with a floating rate. Its net debt from YE2011 to YE2013 has remained essentially flat, and the airline expects the unencumbered aircraft to rise from 23 at YE2013 to 34 or 35 at YE2014.

Is it time for some airlines to return to private equity to avoid Wall Street pitfalls?

JetBlue believes it can drive a 7% ROIC for CY2014 after missing its stated return targets in CY2013, and has a stated goal of driving a 1% increase in ROIC annually.

It is laying the groundwork to combat its lingering cost challenges and leveraging the strongest points in its network strengthen revenue while at the same time making strategic changes in its ancillary revenue stream to bolster its non-ticket revenue.

But none of that seems to satisfy its growing critics on Wall Street, which are pushing for a management change. It seems with each prediction that JetBlue’s CEO Dave Barger will depart when his contract terms ends in Feb-2015 drives up the airline’s stock price – the epitome of Wall Street’s irrational exuberance.

If nothing more perhaps the events that have unfolded at JetBlue during 2014 beg one important question: Should some airlines consider a return to private equity to avoid the irrational expectations dictated by Wall Street?

If JetBlue is in fact pursuing a sound medium term strategy - and there are good reasons for thinking that this form of differentiation in the market has benefits beyond the next quarter - then the travelling public may well end up as the beneficiaries. Meanwhile though it appears that Wall Street is intent on driving every model into the lowest common denominator, driven by short term revenue goals.