Jet Airways to consolidate and rebrand its low-fare products, JetLite brand to disappear

Jet Airways, India’s largest carrier by market share, plans to merge its two low-fare brands under the JetKonnect brand from 25-Mar-2012, as part of a strategic rebranding and rationalisation exercise and efforts to simplify the group’s service proposition and enhance brand recall. Under the restructure, JetKonnect will be the dedicated low-fare service with a mixed fleet of Boeing and ATR aircraft operating on metro, tier II and III routes, with Jet Airways to continue offering a full service product across domestic and international markets.

The restructure was initially flagged by CAPA in Mar-2011, which was confirmed by the carrier in Jul-2011 when it revealed plans to merge the three Jet-branded units into two groupings amid an increased focus on the low-cost segment by the carrier.

"The management is very clear that there will be only one brand in the low-fare arena," Jet Airways Group VP commercial strategy and investor relations K G Vishwanath said at the time. Announcing the details of the restructure on 19-Mar-2012, Jet Airways COO Sudheer Raghavan said, "The launch of JetKonnect is the culmination of a well-coordinated effort and arises from the fact that since its inception in May 2009, JetKonnect has proved to be a successful model. We thought it best to consolidate our product in the low-fare segment with a single brand JetKonnect, for enhanced brand recall". He continued: “The decision was made to streamline our product portfolio and offer our guests a single superior inflight product in the full-service and low-fare categories respectively, drawing synergies from the Jet Airways mother brand.”

Under the restructure, Jet Airways (India) Limited and JetLite (India) Limited, will continue as distinct business entities operating under their own airline operating permits. Some JetKonnect flights will operate under the S2 (Jet Lite) code, while others will have flight numbers prefixed by the 9W (Jet Airways) code. 9W and S2 will also continue their existing codeshare agreement.

In this sense, the merger is little more than a branding exercise, with the fundamentals of aircraft ownership and slot allocations to remain the same as under the current model. However, the carrier is looking at opportunities to optimally deploy and cross-utilise common resources of Jet Airways and JetLite where possible and this rebranding exercise will “help further in synergising our collective operations”, Mr Raghavan said.  According to reports from earlier this year, “the merger of balance sheets is not contemplated as (of) this moment", according to senior VP finance M Shivkumar. Jet Airways VP commercial strategy and investor relations Mr Vishwanath added: “The brand value of Jet Airways Konnect will be more after branding and we will be able to charge more". JetLite will remain a legal entity, a shell company that will continue to own the aircraft operated under Jet Airways Konnect. JetLite will see at least six aircraft leases expire over the next 18 months, with a fleet of 20 new aircraft expected in the coming 12-18 months.

As part of the branding, the aircraft will be painted in JetKonnect colours over time. JetKonnect will offer Premiere services on certain routes, offering the same product as Premiere passengers receive on Jet Airways services. This will be further expanded in a phased manner. The cockpit and cabin crew will have the same uniform as their counterparts from Jet Airways. A gradual rebranding of the JetKonnect brand would be manifest on letterheads, the JetKonnect website, boarding passes, tickets, stationery. Signage at all check-in and ticketing counters will have dual branding reflecting the existing Jet Airways and the new JetKonnect logos. Difference in fares between the Premiere Jet Airways and JetKonnect will also be reflected on the website and all visible communication avenues. Economy guests on board JetKonnect flights will continue to be offered a range of refreshments from Jet Cafe, JetKonnect's buy-on-board meal service.

Despite being the strongest of the three Indian carriers in the full service segment and the carrier benefiting the most from Kingfisher Airlines’ current woes, Jet Airways will further embrace the low-cost model in 2012, increasing the proportion of domestic capacity operated by its low-cost subsidiaries.

Despite continued losses at its low-cost unit and opportunities arising from the weakness at both Kingfisher and Air India, Jet Airways plans to increase domestic and short-haul international low-fare capacity in response to rising LCC competition in the Indian market. The move will entail a change in its current business model to be “in sync with market realities.” However, concerns centre on the potential pressure on earnings the shift in strategy could entail, with the carrier struggling to gain profitability at its low-cost operations in the domestic market.

JetLite reported a USD6.6 million loss before tax and a USD4.4 million loss after tax in 3QFY2012, swinging from profits in the same period of FY2011, although the carrier was profitable at the EBITDAR levels in the quarter with an 8.8% profit margin. This margin was stronger than the Jet Airways EBITDAR margin of 5.3%, comprised of a 1.9% margin for domestic operations and 8.1% margin across its international network.  JetLite’s load factors averaged 78.6% in the quarter, compared to a breakeven load factors of 84.5% (36.4% without fuel), with an average revenue per passenger of USD74.6 in the period. Comparatively, Jet Airways’ domestic operations had an average load factor of 75.2% compared to a breakeven load factor of 86.3% (50.7% without fuel). Its average revenue per passenger was USD93.6. (See Appendix for more information.)

Jet Airways, adapting to changing market dynamics which has seen standalone LCCs making “huge inroads” into the industry over the past three years to hold around a 67% market share in the domestic market (including JetKonnect, or around 50% without JetKonnect but including IndiGo, SpiceJet, GoAir and JetLite), aims to compete more effectively in the low-cost segment to enable it to retain its dominant position in the Indian market. The Group had a combined 30% domestic market share in Feb-2012, with 22% of that held by Jet Airways/JetKonnect and 7.8% by JetLite. 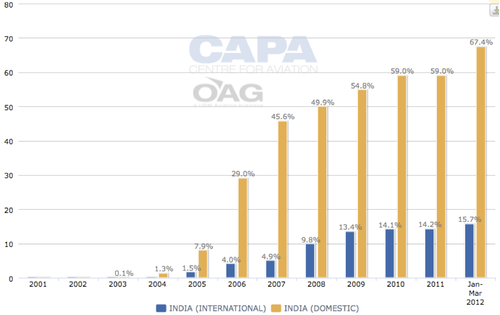 Around 75% of the airline's capacity, which includes its subsidiaries JetLite and Jet Konnect, is deployed in the low-cost category. Mr Raghavan stated he expects this to grow: "It is my gut feeling that 85-90% of the capacity will be in the low-cost medium in five years or before," he has previously said, noting there will be a continued and “progressive transfer of capacity from full service to low fare”.

Reacting to Kingfisher moves in the short term too

While Jet Airways has outlined its focus on the low-cost segment in the long-term, the carrier noted its full service brand will continue to play a dominant role both in domestic and international operations. A number of opportunities exist for Jet Airways amid Kingfisher Airlines’ network cutbacks and continued challenges at Air India, with the carrier seeing positive improvement in terms of corporate traffic growth, yields and load factors.

Regarding the long-term feasibility of this strategy, Mr Kumar has commented: “If the demand and the situation require that we have to go back to the other model, we will be able to do that immediately”. CEO Nikos Kardassis has previously said, “The corporate segment is now shifting over to us”, with the carrier’s yields improving as a result. Meanwhile, the carrier could gain access to some key international routes, such as Paris CDG, as the Government takes a more relaxed approach to granting bilaterals to private carriers, and Hong Kong as Kingfisher retreats. Last month, Jet Airways chairman Naresh Goyal said the carrier was ready to operate several foreign routes once it gains government approvals. The airline has applied for permission from the Government to operate to Bangladesh, countries in West Asia and Europe.

In the immediate term, Jet Airways is focusing on streamlining its activity and improving its operational efficiency at a time of considerable financial pressure on the local aviation industry. Jet Airways, benefiting from the weakness at both Kingfisher and Air India but also loss-making like its peers, has said it will not significantly add capacity during 2012/13, with the carrier stating capacity growth would be "sedate" at around 5%. Growth will be strategic, targeted on key markets, served by both its full-service and low-cost arms, as it capitalises on new opportunities in the market, stemming from the withdrawal of Kingfisher Red and Kingfisher’s international operations. Meanwhile, the carrier will further embrace the low-cost model in 2012, increase the proportion of domestic capacity operated by its low-cost subsidiaries, which will now operate under a single brand, which should remove some confusion in the market and strengthen its positioning.

About JetLite and Jet Airways Konnect

Jet Airways, Jet Airways Konnect and JetLite have a combined fleet strength of 120 aircraft and operate over 620 daily services.

JetLite was formed after Jet Airways purchased the airline business of the Sahara Group in 2007. However, since the two carriers have separate operating permits, transfer of aircraft from one brand to another requires regulatory approval. As a result, the carrier created Jet Konnect to operate low-cost services. There are a few factors which appear to still be holding back a complete merger of the two low-cost groups, mainly surrounding the need to gain lessor approval for a transfer of aircraft from one individual entity to another (60% of the Jet Airways fleet is leased). 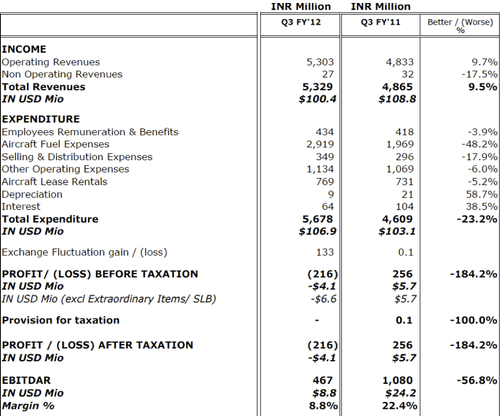 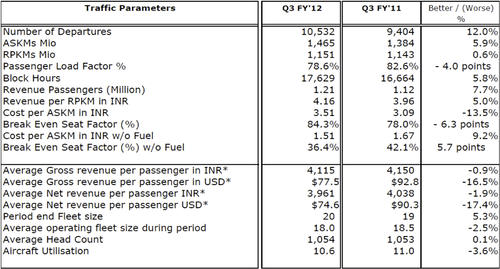