JAL bankruptcy a tsunami whose waves circle the world; maybe deadly for oneworld

As JAL declares bankruptcy and Delta closes in on a new partnership, the oneworld alliance and its members are contemplating the wave of change that is hurting them so much. The alliance’s leading US and European members, American Airlines and British Airways, are struggling to reinvent themselves; antitrust immunity for them seems to be an unachievable goal; mergers are seemingly out of reach for the time being; and now...JAL.

By contrast, for SkyTeam, the news is massively good – and not just for the Japan market. These developments will have global ramifications, notably for SkyTeam and oneworld.

With JAL’s bankruptcy announcement yesterday, the Japanese flag carrier’s realignment with Delta and SkyTeam and away from oneworld now appears inevitable. An integral part of the carrier’s post-bankruptcy reconstruction will be its future partnership - and Delta and its alliance partners will almost certainly be the chosen ones. This would leapfrog SkyTeam into a very powerful grouping in Asia, just as that market promises to be the growth market of the future, expanding at around twice the global average.

If that occurs, things look particularly dark for increasingly dysfunctional oneworld. JAL’s departure weakens it and, moreover, could prompt more defections. JAL’s entry to oneworld had been a sweet victory, after the carrier pursued an independent bilateral strategy for many years (it was only when rival ANA’s benefits from its Star membership became so overwhelmingly apparent that JAL changed tack). Losing it would be more than equally bitter.

Alliances increasingly important – but not identical

The heavy focus on JAL’s final partnership alignment highlights the increasingly pivotal role of alliances (and antitrust immunity) in today’s world. While no carrier will disappear as a result of a shift to Delta, JAL’s departure from oneworld will substantively weaken both the alliance and its remaining members. Coupled with the ambiguity surrounding Cathay Pacific’s future role in oneworld (given that airline’s attachment to Star member, Air China), the alliance’s hold in North Asia becomes tenuous.

The value of global alliances is well known, but less obvious are the significant strategic variations between the three groupings. Both SkyTeam and Star have allowed, and even encouraged, membership by airlines whose catchment areas overlap. However, the more bilaterally-based oneworld adopted a different strategy - one in which the member carriers more or less enjoyed geographic spheres of influence.

As a result, their European partners roughly form the corners of a box around Europe with British Airways, Iberia, Finnair and Malev each bringing a different network focus to the group.

By contrast, in Europe there is a cluster of Stars around Lufthansa.

And, in the Asia Pacific region, the much larger Star boasts no less than 7 member carriers, with neighbours like Singapore Airlines and Thai Airways (whose mutual cooperation is minimal); or, in north Asia, Asiana, Air China, ANA and Shanghai Airlines, each too in hot competition for the same transit passengers in their respective markets. Shanghai’s new partner, China Eastern, is currently aligned with, but not part of, the oneworld alliance and may well follow Shanghai into Star. 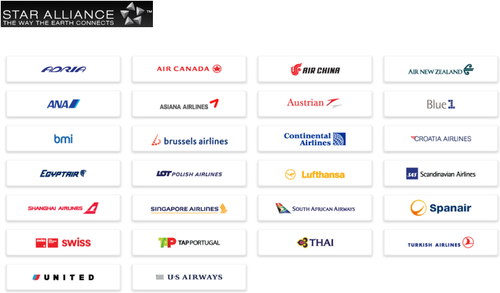 But oneworld’s partners are more widely spaced, as Qantas, Cathay Pacific and JAL form a north-south axis of connections with far less overlap. And their relationships are far less intimate. Qantas, British Airways and Cathay for example compete vigorously on the key London-Hong Kong route, with no codesharing. And even now, British Airways does not codeshare with JAL on Tokyo-London, despite Air France’s already-intimate Paris codeshare link with JAL.

SkyTeam on the ascendance in north Asia

SkyTeam was a much later arrival on the scene and it too is still much smaller than Star. That is why the JAL scalp will be so valuable to it. The combination of Korean, China Southern and JAL makes for a powerful triangle of partners.

(JAL’s arrival will however create some uncertainty among other north Asian SkyTeam members, notably Korean. Korean Air was the first operator in the region to be linked into the alliance, back when accessing the budding Chinese market was difficult for Air France. But once direct access became available, the low yielding Korean alternative was less attractive; nonetheless, Korean remains heavily committed to the alliance.)

SkyTeam also has China Southern, China’s largest airline, with a massive domestic network and a base adjacent to Hong Kong, as well as Beijing. The alliance will thus boast the largest airline in each of the three main regions, Asia, Europe and North America.

Why oneworld is challenged

While offering a different model for its members, the lack of redundancy in oneworld makes the alliance far more vulnerable if one of the partners runs into trouble. The problem is amplified by the fact that very few major players remain unaligned, making substitute alternatives difficult to find. Add to that the fact that alliance-jumping remains fairly rare - especially if the appeal comes from the weakest of the three. Star in particular has a very evil tasting poison-pill exit penalty, something the others don’t – but leaving oneworld is relatively painless.

This is why oneworld is troubled - and not just because of JAL. Both SkyTeam and Star have had successful combinations of members (DL-NW, AF-KL, LH-LX, LH-OS etc), but linking BA and Iberia remains far from a finished product. And British Airways’ possible failure to gain anti-trust immunity over the Atlantic would place it at a substantial disadvantage in cooperating as the Star and SkyTeam airlines do.

Faced again by the prospect of a crippling strike over Easter, after narrowly avoiding a shutdown over Christmas, British Airways keenly needs some good news. Struggling in its efforts to secure antitrust immunity with American and Iberia, it is sinking under the weight of a massive pension fund and a high cost base.

American Airlines too, though far from alone in the US market, remains in a precarious state, with continuing red ink and no obvious domestic partner if more market consolidation occurs.

And then there is JAL

JAL's defection to SkyTeam would create a white spot in the north Asia market for oneworld, isolating passengers to Japan who travel to that nation as part of a broader itinerary to say, China. British Airways’ and American’s access to the north Asian market would be weakened significantly if it were not able to rely on the Japanese carrier for local distribution.

The pie chart below clearly shows the limited impact of oneworld in Tokyo’s Narita Airport, once JAL is removed; and lukewarm Cathay accounts for almost half of that capacity, at 3.4%; LCC, Jetstar offers 1.1% of capacity, just ahead of Lufthansa. 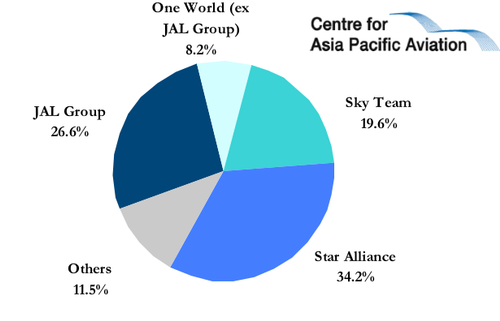 For oneworld, the consequences are considerable, at a time when its members can least afford it.

Qantas is better placed financially, but is reinventing itself in ways which will require it to use codesharing more widely (as it prunes its loss making full service international operations – for example relying mostly on low cost subsidiary Jetstar and JAL codeshares to service Japan) and Cathay remains ambiguous. Apart from a coordinated frequent flyer programme, there is negligible cooperation and fierce rivalry between the two.

The strongest oneworld member is highly successful LAN, but that very strength makes the Chilean carrier attractive to competitive groups, which may look increasingly appealing to LAN, as oneworld’s gravitas shrinks.

By contrast, the benefits for SkyTeam of adding JAL to its roll are apparent. Paris already offers more services to Japan than any other European gateway and, despite their currently-different alliances, JAL codeshares with Air France on all services between the two nations. The chemistry is already working and Japan has always been rich pickings for Air France. Delta, having incorporated Northwest, also gained that carrier’s extensive Japanese presence. The addition of JAL for Delta will just make the pot sweeter.

So JAL’s demise and reincarnation evokes a local tsunami with waves that are likely to spread around the world. For Delta and Air France and their SkyTeam members that global impact will be peripheral to the biggest gain. For oneworld, it could be deadly.