India’s airlines are continuing to grow their fleets as demand booms in a country where an economy growing at nearly 9% is creating business travel demand and a burgeoning middle class is increasingly opting for air travel. And with strong GDP growth, a young population and the expansion of a vibrant middle class, India is expected to achieve some of the fastest growth of any aviation market in the world over the next 20 years.

At the Paris Air Show this month, India’s airlines, namely IndiGo (180 A320s) and GoAir (72 A320neos), ordered a combined 252 aircraft, representing 35% of the firm and identified orders at the show and USD23 billion worth of orders at list prices. Overall, orders at the Paris Air Show were dominated by Asian carriers, part of a shift in economic power from west to east. Overall, Indian airlines have orders worth around USD40 billion, a key challenge amid an environment characterised by high fuel taxes, poor infrastructure, debt and frequently rising interest rates.

According to India’s Civil Aviation Minister Shri Vayalar Ravi, the past 100 years has seen Indian civil aviation “expand exponentially” to become the ninth largest civil aviation market in the world. The government stated it expects India to become one of the three largest markets in the world by 2020, stating civil aviation in the country is “clearly the sunrise sector of the Indian economy that is likely to change the way Indians move, think and live”.

Airport Authority of India chairman VP Agrawal has also noted that India has to face head on the challenges of “phenomenal” traffic growth and the addition of up to 400 aircraft in the coming years, and construct new airports and upgrade others to avoid a future shortfall in capacity.

Driven by continued double-digit domestic traffic growth, traffic numbers at Indian airports could reach up to 450 million p/a by 2020, creating the need for investment of up to USD30 billion in airport infrastructure over the next 15 years. Mr Agrawal stated AAI has embarked upon modernisation and upgrading of 58 airports across the country. “We are also creating more non-metro airports. Traffic in non-metro airports is poised to grow fast because of the need for connectivity,” he said.

Airbus Executive VP Sales Kiran Rao stated that at the beginning of 2000, there were 100 large passenger aircraft in India for 1 billion people, with this increasing to 300 aircraft for 1.2 billion people. "The ratio is extremely small," he continued, adding that over the same period the backlog of aircraft on order has surged from 12 in 2000 to well over 500 after the Paris Air Show. By contrast, China, which is also poised for dramatic growth, started off with 1400 large aircraft for 1.3 billion people.

At present, less than 2% of India’s 1.2 billion population travels by air, pointing to significant growth potential over the next three to five decades. As noted by Airbus, in its Airbus Global Market Forecast 2010-2029 (last updated in Dec-2010), trips per capital in India remains significantly below the global average at less than 0.1 trips per capita in 2009, on par with Belarus and Senegal. Airports Economic Regulatory Authority of India chairman Yashwant Bhave similarly noted that Indian aviation "may have to handle an extra 300 to 320 million passengers per annum within the next 10 years". Mr Bhave added that at present, less than 2% of Indians fly domestically each year and only 0.5% fly internationally, meaning the "growth potential is enormous".

Propensity to travel by country 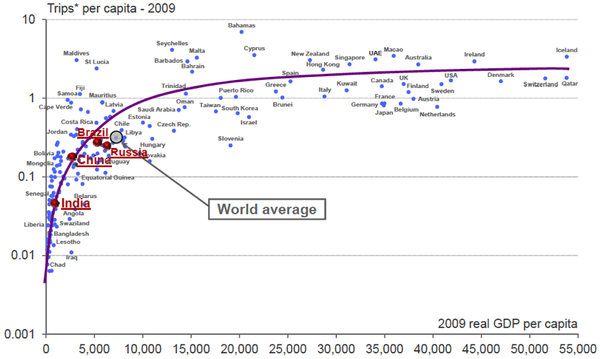 As a result, Airbus forecasts that domestic India traffic (RPKs) will comprise 2.2% of the global total by 2029, with 20-year growth of 9.2% to be one of the fastest growing regions in the world, outpacing growth in the domestic Chinese market. Boeing sees average annual traffic growth of 9.4% between 2010 and 2030 in South Asia. 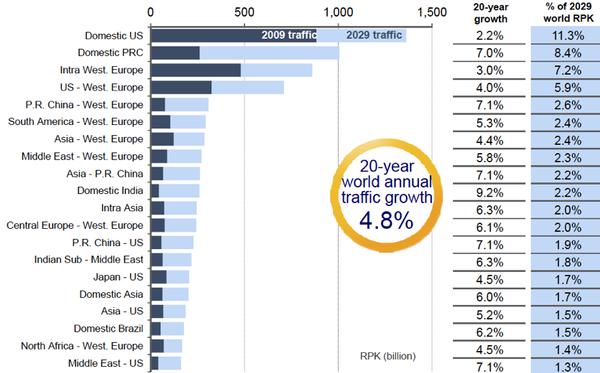 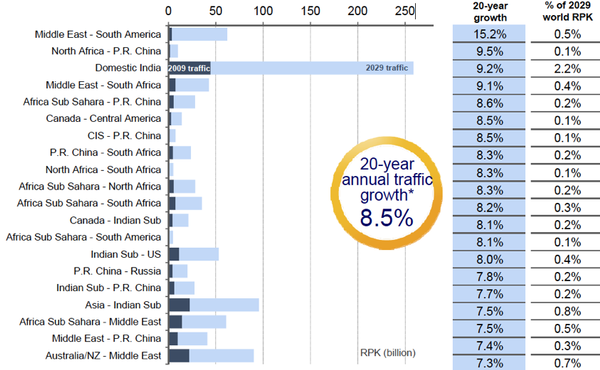 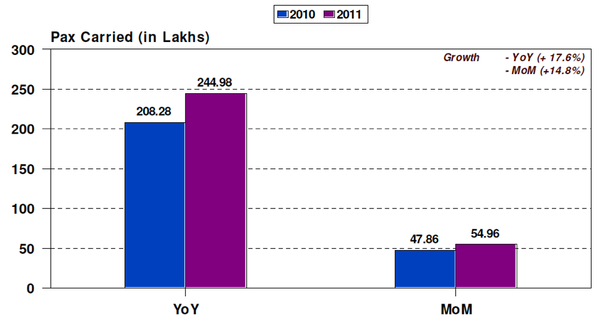 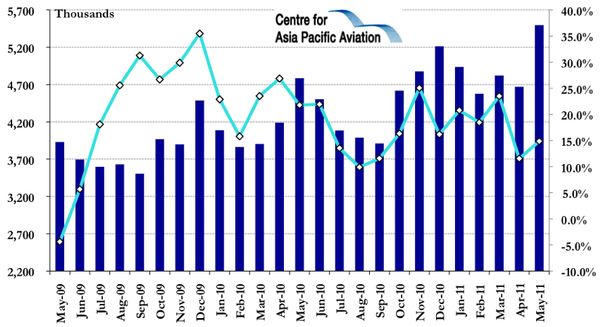 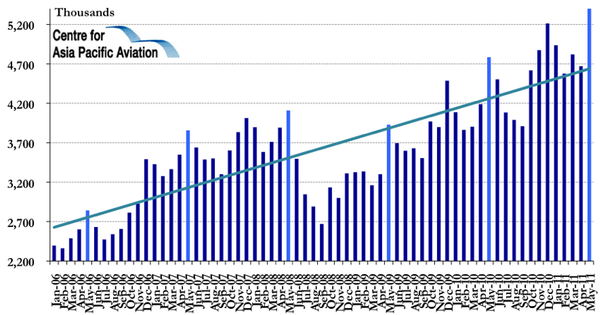 Vijay Mallya-promoted Kingfisher was again the largest domestic standalone carrier in May-2011 with around 1.1 million passengers, based on CAPA calculations. 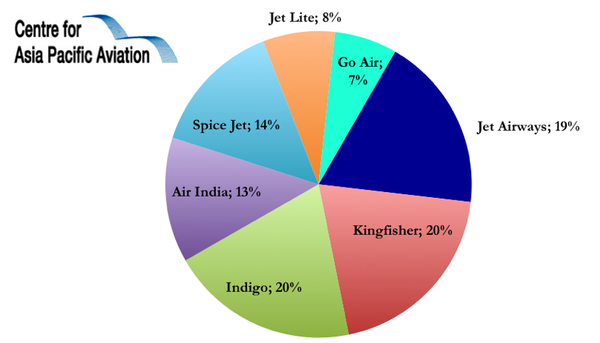 Air India reported a 14.3% slump in passenger numbers in the month, due to the 10-day Air India strike, which significantly affected operations at the beginning of the month and reportedly resulted in losses of losses of INR260 million (USD5.8 million) per day. As part of efforts to stimulate demand following the strike, Air India offered discounts of up to 50% on domestic services. The carrier stated the short-term promotional fares increased its domestic economy-class load factor to 85%, from 68% at the end of the strike (based on domestic economy services). However, other carriers, such as SpiceJet, criticised the fare sale, stating it has had a negative effect on yields in the domestic market.

LCC penetration almost triples to 48% of the market

The most dramatic passenger growth in May-2011 was, as is generally the case, witnessed by LCCs, driven by IndiGo with surging growth of around 45% based on CAPA calculations. GoAir (+29.1%) and SpiceJet (+23.5%) also reported growth of over 20% while JetLite (+8.8%) reported more moderate traffic expansion.

Domestic load factors declined in May-2011 as compared with the previous month as April is generally a lean season for domestic air travel. 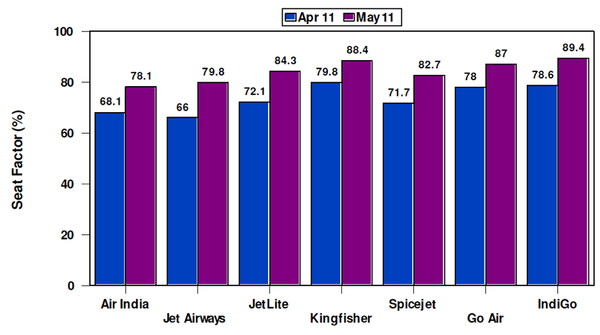 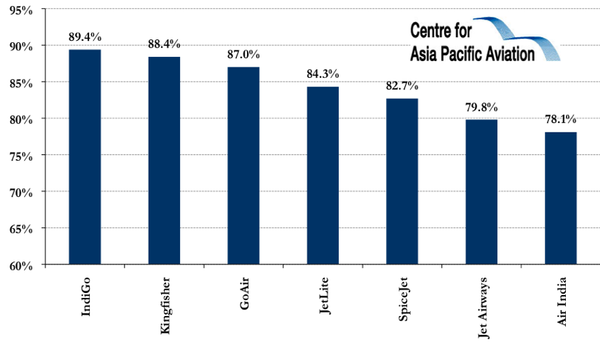 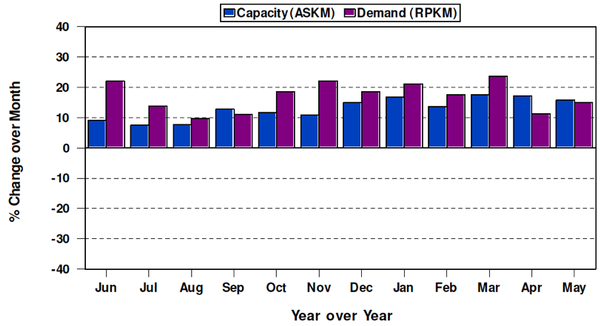 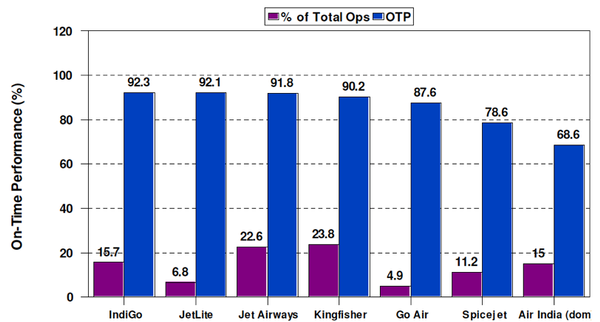 Reasons for delays in May-2011 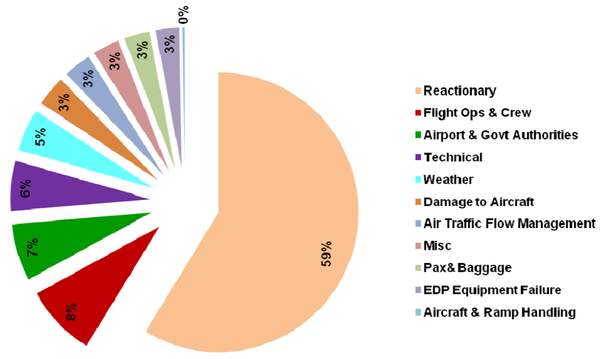 The OTP rate of 54 of the 70 foreign carriers operating to/from India averaged 79.6%% in departures and 78.2%in arrivals in the month. 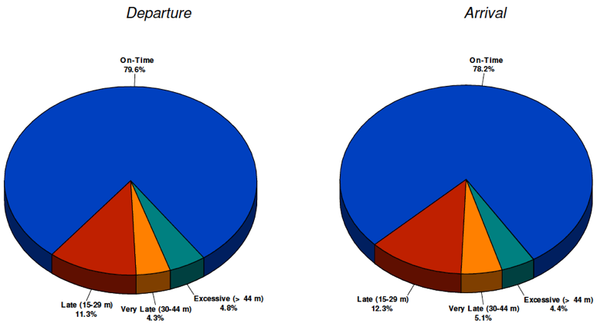 There is potential for considerable growth in India’s aviation industry over the next few decades, with growth increasing in the past two years after a slump caused by the 2008 global financial crisis. Growth will also occur internationally, as the nation’s LCCs expand their networks. More importantly, the robust growth should occur simultaneously for profitable growth, at some airlines at least.