Air India, India’s state-owned national carrier, is continuing to struggle to cope with continued and significant losses and accumulated high debt levels as it seeks another government equity infusion. Air India is facing pressure to turn around its operations not only from within but from Star Alliance, with formal entry into the alliance dependent on achieving certain membership requirements which Air India has been slow to meet.

Meanwhile, the carrier has appointed Deloitte Consulting India to advise on macro issues, to review the turnaround programme and attempt to revive the struggling carrier.

India’s Minister for Civil Aviation, Praful Patel, has stated that Air India’s parent, the National Aviation Company of India Ltd (NACIL) is targeting break-even by 2014/15, although with losses of around USD1 billion in FY2009/10, it has become apparent that a lot of work is required for the carrier to meet this target. The carrier has been in the red since 2007.

To support its operations, the carrier is hoping to receive a USD268 million equity infusion from the government this fiscal year.  The carrier is also seeking to refinance USD1.2 billion of debt used for the purchase of aircraft and is in talks with the Reserve Bank of India over soft loans.

The carrier has established a new a hub at New Delhi Terminal 3 with the shaky start to this transition now largely over. The carrier is seeking to lease an additional 50-plus aircraft over the next five years largely to retain its position in the domestic market.

Air India Express is increasing its importance within the Air India Group, and is planning to launch in the domestic market in Mar-2011. With the launch of domestic services by Air India Express, currently an international LCC, Air India will join Kingfisher (with Kingfisher Red) and Jet Airways (with subsidiaries JetLite and Jet Airways Konnect) in having low-cost offshoots in the domestic market. Internationally, the carrier will expand its presence once its joins the Star Alliance, targeted for 2011.

Air India has sought approval from the Reserve Bank of India to convert a major portion of its working capital loans into term loans, with a moratorium of two to three years on principal repayments as part of a financial restructuring plan.

A Kingfisher Airlines debt recast plan has already been approved on 23-Nov-2010 under this programme. If the RBI agrees to the Air India debt recast, the carrier will be able to reduce the interest rate on its working capital loans, reducing its debt servicing burden significantly.

Seeking another cash injection of USD268m

Indian Group of Ministers will reportedly meet “shortly” to consider a plan to inject INR12 billion (USD268 million) into Air India, as per media reports in late Nov-2010. USD175 million was injected into the carrier in Feb-2010. Members of the GoM, headed by Finance Minister Pranab Mukherjee, reportedly stated they would meet in an expeditious manner given the critical financial health of the airline.

However, India’s Finance Ministry has reportedly stated it is unable to recommend the release of the funding after the carrier failed to achieve a number of cost-cutting milestones set by the Ministry. The Government has also requested the airline take revenue-enhancing measures to strengthen its bottom line.

Revenue and EBITDA improve in six months to Sep-2010

Air India reported improved passenger and cargo revenue, EBITDA and passenger yield in the six months to Sep-2010 although exact figures were not disclosed. However, the carrier continues to make a loss.

The carrier reported an improved load factor at 64.8% during the 12-month period. Unit revenues and unit costs declined slightly in the period, while yield reductions were more notable. 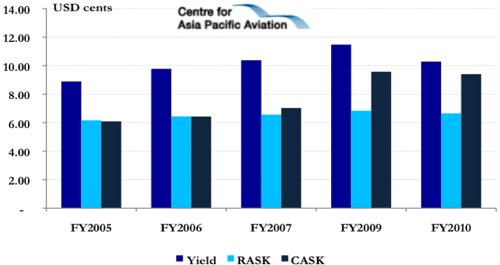 Source: Centre for Asia Pacific Aviation and Air India
*FY2008 data not available
**Based on the conversion rate at USD1 = INR45.2594 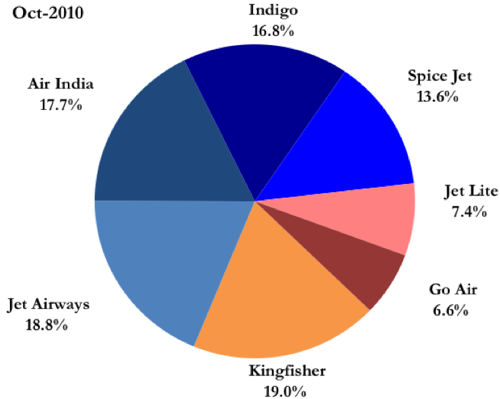 Despite its weak financial position, Air India reportedly plans to lease 57 aircraft in the next five years.

The move signals the airline’s intention to regain the market share it lost to rivals, such as Jet Airways, especially in the domestic market. However, given the financial situation of Air India, there are concerns that the national carrier is taking on too many aircraft and the associated expenses.

The aircraft will be leased from early 2011 and will include 10 A330s for international operations, 10 A320s and five B737s, with the B737-800s for use for its low cost unit, Air India Charters, which operates short-haul international services under the Air India Express brand. The carrier will also commence domestic operations in Mar-2011.

Air India will also lease 15 ATR42s and 18 CRJ700s for use by subsidiary, Alliance Air.  The regional aircraft plan is part of efforts to enable Air India to connect Tier II and Tier III cities with 45 small aircraft it plans to have in its fleet over the next three years. The carrier currently has 11 aircraft configured with 40-80 seats.

The new aircraft will augment the carrier’s 148-strong existing fleet and is in addition to the carrier’s current USD15 billion programme to purchase 111 aircraft following orders made with Airbus and Boeing in 2005.  Delivery of the aircraft, which commenced in 2007, involved the purchase of 68 aircraft from Boeing and 43 from Airbus. Of these, Boeing has delayed the delivery of B787s as the launch of the aircraft has missed deadlines. Air India was scheduled to get its first of 27 B787s in Sep-2008, but this is now set to happen in the second quarter of calendar year 2011.

This month, Air India confirmed it is finalising a claim for a USD840 million compensation package from Boeing covering the extensive B787 delays. The compensation includes a discount in services and cash, according to Air India COO Captain Gustav Baldauf. Deliveries are now expected to commence in 2Q2011.

The carrier has reportedly shelved plans to lease out part of its B777 fleet but added that it could reassess leasing out B777-200LRs once it takes delivery of B787 equipment. It was previously reported that the carrier was negotiating agreements to sub-lease six B777-300ER/200LRs to Air Canada, Thai Airways and Air Austral. The three carriers all responded to a tender initially issued by Air India earlier this year as part of a cost reduction plan but the carrier was unable to attract a lease payment sufficient to offset the financing cost of the aircraft. Separately, the carrier’s Board has approved the sale of four A310Fs which are nearly 20 years old.

A number of Air India’s competitors in the Indian domestic market are also taking delivery of new aircraft. SpiceJet recently placed a USD900 million order with Bombardier for 30 Q400 aircraft in addition to its USD2.7 billion order for 30 B737s. IndiGo has also received government approval to purchase 150 Airbus aircraft.

However, the carrier has faced significant IT issues which has delayed the process. Work on its IT overhaul commenced in 1H2010 and is expected to be completed by early 2011.

As part of this, Air India reportedly plans to install a uniform ticketing system by the end of 2010. SITA will install the system as part of a INR800 crore (USD180.5 million) contract with a trial version to run from Jan-2011 to Mar-2011. The integration will give one code to Air India, eliminating the separate codes and separate booking counters for Air India and Indian Airlines.

Air India stated it started the search for a new COO for Air India Express in Dec-2010. Air India’s Board recently decided to remove Pawan Arora after less than two months in the role, with controversy surrounding his appointment.

Air India’s turnaround is complex and the carrier has much work to be done to reach its break-even target by 2014/15. While the carrier is plagued by numerous challenges, it does however have the benefit of operating in a rapidly expanding and high potential market. Entry to a global alliance, slated for 2011, will also help boost the carrier’s profile and network, although the carrier’s future success is dependent on having a carefully thought out restructuring plan that has the support of senior management, the board of directors, the government and staff. At present the combination of political influence and inconsistent strategic decisions could prevent the carrier from achieving the required cost savings and revenue enhancements required to put the carrier back on the profitability track.