Southwest Airlines, the star performer in improving its unit revenues in recent months thanks to its continued capacity disciplin, trumped JetBlue, Continental Airlines and US Airways in the yield growth stakes again in Mar-2010, but was joined by United Airlines in reporting 20%+ year-on-year PRASM growth in the month.

Encouragingly, all the US carriers reporting monthly unit revenue figures experienced double-digit growth in the month, albeit off a weak comparison from Mar-2009. AirTran and Allegiant, which do not provide such updates, previously commented they have seen improved yield conditions in the market.

Southwest stated passenger revenue per ASM for Mar-2010 is estimated to have surged 22% in Feb-2010 - its largest PRASM increase in the past 12 months and the seventh consecutive month of PRASM growth for the carrier. The increase compares to a 10-11% RASM reduction in Mar-2009. (NB Southwest did not provide monthly PRASM breakdowns in 2008). 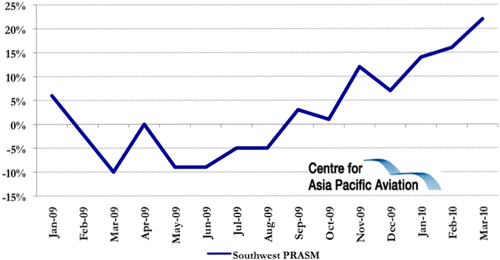 Last month, Southwest Airlines CFO, Laura Wright, commented that the carrier plans to focus on increasing profits, rather than growing capacity in 2010. 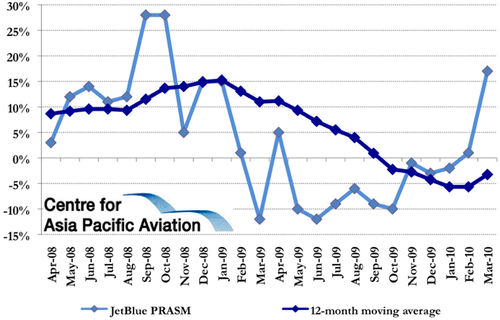 JetBlue has previously stated it expects PRASM and RASM to be in the range of negative 1-2% in 1Q2010, but some solid improvement thereafter. JetBlue is forecasting PRASM and RASM for the full year to increase in the +5 to +8% range.

Meanwhile, Fitch Ratings, prior to the most recent traffic release, stated it believes the airline is in a “good position” to deliver improved operating results and a second consecutive year of positive free cash flow as the economy recovers in 2010.

However, Fitch warned that the carrier's plan to grow capacity (ASM) capacity by 5-7% in 2010 may constrain RASM growth relative to other US carriers. Fitch added that it expects JetBlue to report material gains in RASM in 2010 as the economic recovery drives a significant pick-up in traffic while slow industry capacity growth and reduced fare sale activity boosts yields.

Fitch added that given JetBlue’s light exposure to high-fare international business traffic, the LCC delivered better unit revenue results than the network carriers during 2009, although, by the same token, it may lag somewhat this year as fare hikes and a pick-up in business demand should help network carriers report better year-on-year RASM comparisons.

In light of this, Fitch believes that full-year 2010 RASM growth in the mid-single digit percentage range is achievable. However, non-fuel unit operating cost pressure remains a concern, as unit labour and maintenance costs have been rising at a high rate in recent quarters. JetBlue earlier stated it expects non-fuel costs per ASM to rise in the range of 3-5% in 2010, down from 6% in 4Q2009.

Also among the LCCs, AirTran Airways (which does not provide monthly yield updates) last month commented that there is a "favourable industry backdrop going forward", with capacity remaining "disciplined" and yield trends "improving".

The carrier added that it also has a cost advantage among its US counterparts, although AirTran did provide cost data for Allegiant and Spirit. 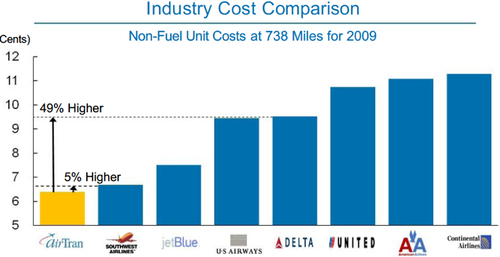 Allegiant stated it anticipates RASM growth of more than 2% in 1Q2010, with a total fare change of at least 5% in the quarter. TRASM is expected to increase by 1% or greater. (Like AirTran, Allegiant does not provide monthly yield/unit revenue updates).

Meanwhile, Allegiant stated it expects flat ex-fuel costs in 2010, with the carrier stating it has the lowest cost per passenger levels among the nation’s LCCs.

Cost per passenger vs stage length among US LCC segment 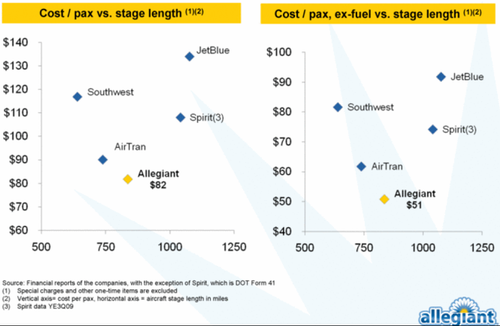 Among the network carriers, United Airlines reported an estimated increase in consolidated passenger revenue per available seat mile (PRASM) of 21.5% to 23.5% in Mar-2010, for the fourth consecutive month of improvements and the largest year-on-year rise since prior to Jan-2008. Consolidated PRASM is estimated to have increased 3.2% to 5.2% in the month compared to Mar-2008 levels, approximately 3.0 ppts of which are due to growth in ancillary revenues. 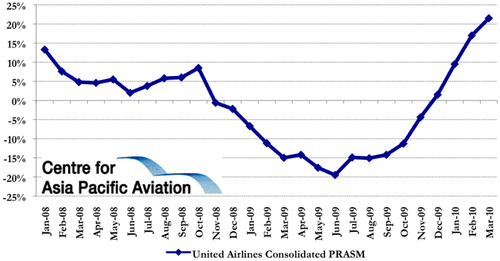 Thanks to three consecutive months of double-digit RASM growth, United is headed for its first quarter of positive RASM growth in over four quarters. The carrier is seeing “recent revenue improvements” that are “outpacing the industry”, driven by improvements in international and business travel demand. 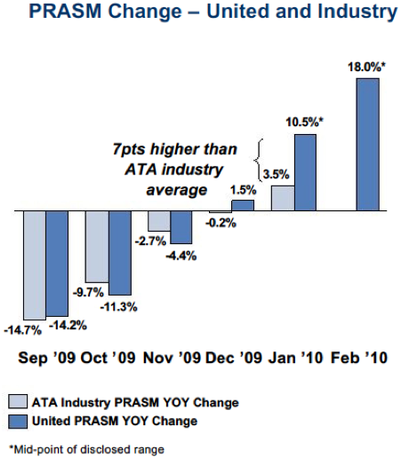 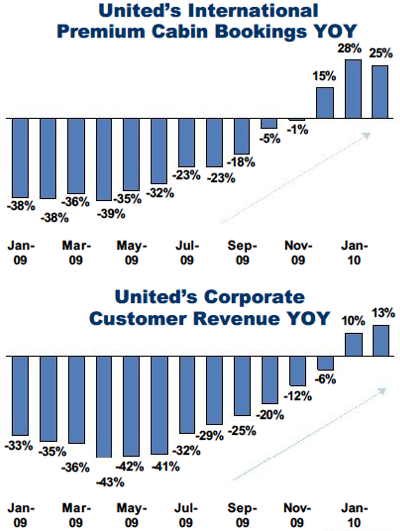 Continental reported an encouraging set of traffic results for Mar-2010, with its second consecutive month of positive yield growth, and the largest year-on-year PRASM growth in over two years. 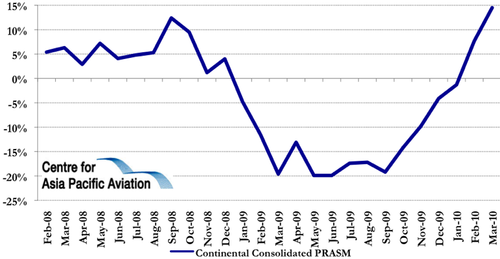 Looking at a two-year range, Continental’s Mar-2010 PRASM was below Mar-2008 levels. 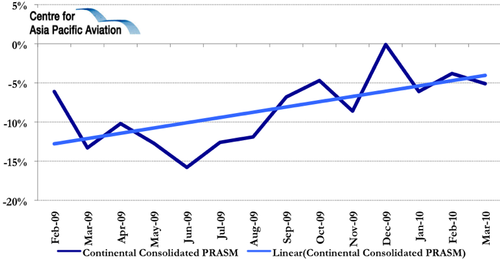 US Airways seeing “positive momentum” in the revenue environment

Mr Kirby added that the results indicate that the “positive momentum that we have seen in the revenue environment has continued with particularly strong year-over-year growth in booked yields".

The carrier previously stated that yields bottomed in May-2009/Jun-2009, as the pricing environment “gradually improved” over the Northern Summer last year. The carrier added that the more positive yield data from Nov-2009 onwards coincided with “less aggressive” fare sales, the cancellation of so-called junk fares and “surcharges”. 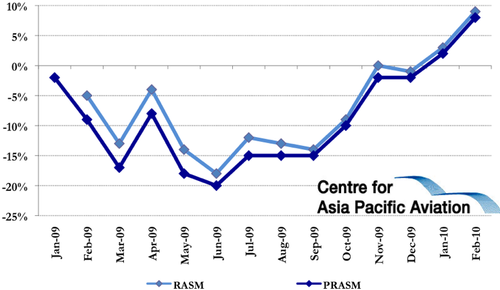 While Delta Air Lines does not provide unit revenue data, it has separately commented that unit revenue momentum was “building” in 1Q2010, with growth of 16% year-on-year in Mar-2010. Improvements are driven by weaker year-on-year comparisons, capacity discipline, economic recovery and improving corporate revenue and volume trends. 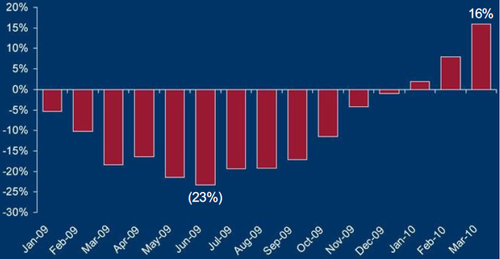 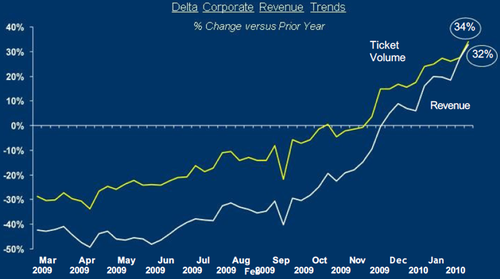 Similarly, American Airlines, which does not provide monthly unit revenue updates, last month stated that it expects consolidated unit revenue to increase between 6.8% and 7.8% for the three months ended 31-Mar-2010. Mainline unit revenues are expected to increase in the 6.5% to 7.5% range.

Looking at the industry-wide trend, the Air Transport Association of America (ATA) reported that passenger revenue, based on a sample group of carriers, rose 4.5% year-on-year in Feb-2010, marking the second consecutive month of revenue growth. In 2009, passenger revenue declined 18%, for the largest year-on-year decline on record, and exceeding the 14% decline observed from 2000 to 2001.

Approximately 2.9% fewer passengers travelled on US airlines in the month, in large part due to inclement weather, while the average price to fly one mile rose 5%, for the second consecutive month of growth. ATA President and CEO, James C May, commented that the growth in passenger revenue is a “reflection of growing consumer confidence in a recovering economy”. 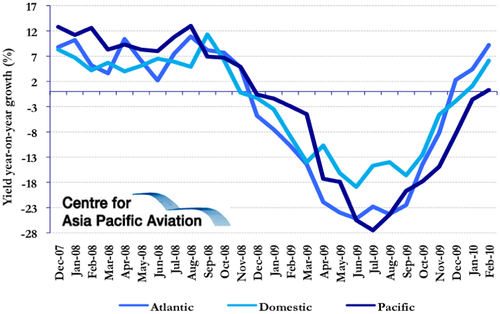 On a 12-month moving average, yields also appear to have stabilised. 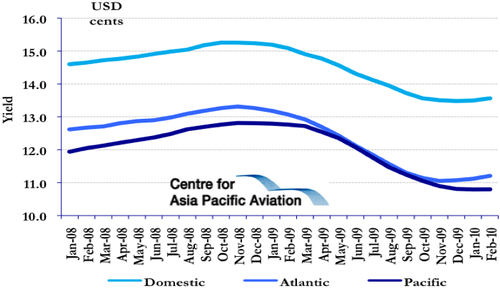 Meanwhile, all of the nine US major airlines reported load factor improvements in Mar-2010, reflecting continued capacity reductions by US carriers on domestic operations.

During the month, all but three of the major airlines reported capacity reductions, with only JetBlue, AirTran and American Airlines, in addition to the smaller Allegiant reporting capacity increases among the nation’s nine largest airlines (systemwide capacity for Allegiant was up, as usual, by double-digits in the month, by 14.4%). 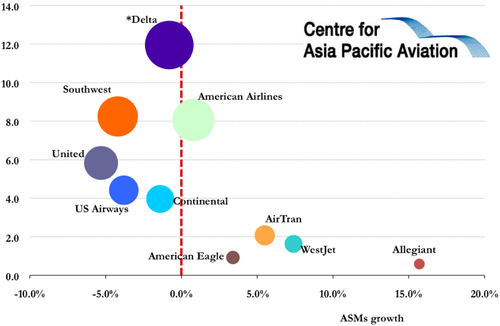 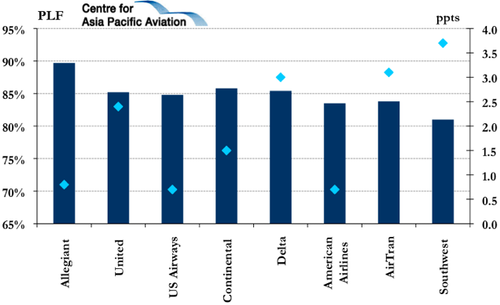 Only JetBlue and AirTran increase capacity in 1Q2010 among the majors

Among the nine majors, only JetBlue and AirTran increased capacity in the first quarter, with smaller carriers, Allegiant and American, and Canada’s WestJet also increasing capacity. Allegiant has added that it sees “room for capacity upside” in 2010, signalling a continuing expansionist push in 2010, with AirTran stating it plans to increase capacity by 3-4% in 2010 and 2011, following a 2% capacity contraction in 2009. 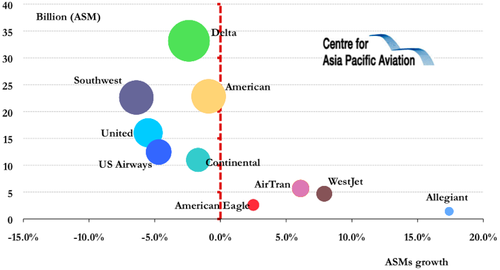 In 2009, continental US capacity (ASMs) decreased 2% from the 2003 levels, with AirTran commenting that “domestic capacity is now at the lowest level in over a decade”. US Airways, which plans to only increase systemwide capacity “in line with the industry” at 0.8% in 2010 (Mainline growth of 0.8% and regional growth of 0.5%), added that the significant capacity reductions of 2009 were “unprecedented”.

Significant losses again in 2010, but less than initially anticipated: IATA

IATA Director General and CEO, Giovanni Bisignani, commented, “important fundamentals are moving in the right direction. Demand is improving. The industry has been wise in managing capacity. Prices are beginning to align with the costs—premium travel aside. We can be optimistic but with due caution. Important risks remain. Oil is a wild-card, over-capacity is still a danger, and costs must be kept under control—throughout the value chain and with labour.”

However, growth remains concentrated in the emerging markets of Asia, Latin America and the Middle East, with benefits accruing mainly to airlines in these regions. Comparatively, airlines in the large developed markets of Europe and North America face much more sluggish market growth, with this “2-speed recovery” in economies, freight and travel markets is reflected in the divergent performance of airlines in different regions. This will result in a “sharp” difference in airline prospects for 2010. See related article: IATA cuts airline industry 2010 loss forecast by half. Structural shift in premium yields?

US Airways and United Airlines in talks to merge. Continental to make United bid?

IATA has also renewed its call for merger and acquisitions in the aviation market. Mr Bisignani stated consolidation and mergers are “a must” if the airline industry is to become more efficient.

Also this week, Republic Airways selected the Frontier Airlines name for its consolidated branded network in favour of the Midwest Airlines brand, with the airline stating that “research showed that customers preferred the Frontier brand”. Republic purchased Midwest Airlines in Jul-2009 and Frontier Airlines in Oct-2009. Since then, the two carriers have operated as partners with the goal of eventually integrating into one carrier. Republic expects the integration process to take 12-18 months. See related article: Republic announces branding decision: It’s Frontier! Animals and cookie survive, challenges remain

The outlook for 2010 for US airlines is now more optimistic, with demand and revenue trends now moving in the right directions, although year-on-year comparison will be swayed by comparison to what was the worst ever year for aviation in 2009. It is becoming increasingly apparent that the 2008/09 global economic crisis will permanently change the aviation industry in the US and globally, taking the form if increasing consolidation and permanently altered business models (including a greater focus on ancillary revenues and product unbundling).

With such a yield prognosis, permanent structural changes will be essential.