Icelandair revival a prelude to a battle with Iceland Express?

Icelandair will increase scheduled services by 17% in 2011. The carrier will fly to a record 31 cities with the increased capacity estimated to create 200 jobs directly related to Icelandair’s operations, in addition to related jobs in tourism. In peak season, Icelandair will offer 183 flights per week. This is the latest in a series of announcements from the flag carrier that suggests it has surmounted the very serious difficulties posed by the country’s financial collapse, including a return to the Baltimore – Washington region that it vacated in 2008.

Icelandair’s most recently released financial reports, for the three and six months ended 30-Jun-2010, reveal increases in almost all categories, and notably EBITDA, which gained by 52.7% and 58.8% respectively, while cost increases have been kept below revenue increases. A net loss was made in both periods, which is the (extended) low season for Icelandair as far as visitors to the country are concerned, but greatly reduced in both instances. And this was achieved despite April’s volcanic eruption.

Better results still were anticipated for the third quarter, including a net profit. The EBITDA forecast for the full year 2010 has been increased from ISK7.6 billion to ISK8.5 billion, which corresponds to a 12% increase from the previously published forecast. The long-term prospects for Icelandair Group’s operations are favourable, in the opinion of the company's management. It is the belief of that management that the company “is in a good position to move forward by focusing on its operation of an international route network and universal services to travellers.”

In Jun-2010 the Pension Fund of Commerce (PCF) entered into a binding agreement with Icelandair Group to invest ISK1 billion (EUR6.4 million) in the group in return for a 12% shareholding, following on from an agreement with FSI (The Enterprise Investment Fund (Framtakssjodur Islands, FSI), an investment company owned by 16 Icelandic pension funds, for the acquisition by FSI of ISK3 billion (EU19.0 million) in shares in Icelandair Group. Under the new agreement, Icelandair broadened the investor base and obtained a total of ISK4 billion (EUR25.4 million) in cash through the sale of new shares in the space of two days. In addition, the group's largest creditors have undertaken to convert debts in the amount of ISK3.6 billion (EUR22.9 million) into shares based on a price ISK5 per share which corresponds to a subscription of 720 million new shares.

Why is traffic and revenue on the increase? Like its competitor Iceland Express, Icelandair has benefited from the low value of the Icelandic Krona, which at one time allowed prices for accommodation and meals – always an issue in Iceland - to halve for most visitors, and very attractive to vacationers who have always wanted to visit the country but had repeatedly put if off because of the cost issue. The corollary is that prices increase for outbound travellers – and the population does like to travel, historically making six trips per annum per head of population prior to the financial crash – reduced that desire but the population is barely over 300,000 anyway.

Additionally, there has been a considerable improvement in the number and range of hotels, and of the variety of tourist offers as heavy investment was made during Iceland’s false boom period. Until the advent of Iceland Express, Icelandair virtually monopolised the inbound tourism business through vertical integration (flights, airport transfer, hotels, deals with tour operators, car rental etc) and still retains enormous power.

Moreover, the country has actually been able to capitalise on the Apr-2010 volcanic ash cloud incident through Icelandair’s ‘Inspired by Iceland’ campaign, which underscored the traditional promotion of the country as the ‘land of ice and fire’. The Eyjafjallajökull eruption cost the group approximately ISK1.5 billion (USD13.3 million) but, perversely, it will probably repay that cost several times over in the long run, even if those travellers marooned abroad during the eruption are not likely to figure amongst the new wave of  visitors.

There has been a perennial debate within Icelandair as to whether or not to focus on the country’s unique tourism product (which includes a wild night life scene and a vast array of internationally recognised pop and rock bands, as well as the geophysical features) to increase passenger numbers; or whether to concentrate instead on the connecting (sixth freedom) flights between Europe and North America. Like a mini Dubai, Iceland is perfectly situated to handle rapid intercontinental connections at the small and modern Keflavik Airport, which has a US immigration and customs pre-clearance facility.

The advantage of the connecting flights is that they can be offered year-round, whereas Iceland’s tourist attractions are limited in the main to a five month May-Sep window because of lack of daylight and severe weather, and despite the addition of a high standard MICE offer targeted at increasing low season visits.

However, an increase in Icelandair’s capacity means both markets can now be satisfied more readily, with the commonality of aircraft type that transfer passengers prefer. The carrier now operates 14 long range B757-200 aircraft, which have been reconfigured with a new interior. The B737-400s which once operated European services and occasional transatlantic ones (eg Halifax, Nova Scotia), have all departed. Four B787s are on order.

Throughout the summer of 2010 Icelandair increased its schedule or announced future increases, both in Europe (for example Helsinki; Frankfurt; Bergen, Norway; and Billund, Denmark) and North America (e.g. Seattle, which went to a six times weekly service and Washington Dulles, a new route that it will serve four times weekly seasonally from May to Sep-2011). Icelandair operated for many years to Baltimore-Washington, year-round, but withdrew in 2008. The return to that region, and to Dulles in particular, may have been influenced by the airport’s improved surface accessibility, or by the better opportunities for onward flights - it has an existing code share agreement with Alaska Airways and Horizon Air for connections at Seattle, one of its North American gateways along with Boston, New York, Orlando, Minneapolis, Halifax and Toronto, to Los Angeles, San Francisco, Las Vegas, Anchorage and other cities.

The way Icelandair works is exemplified by its circular Keflavik-Glasgow-Manchester-Keflavik route, which was extended to five times weekly this summer. Apart from the tourist traffic to and from Iceland (the latter based around football and shopping), the flights have been dovetailed into the transatlantic schedule, neatly filling gaps at the respective UK airports so that connections from there to and from Halifax, Minneapolis and Seattle for example are faster than any other route and Toronto is served by a scheduled one-change service rather than the charters that are the only direct connections remaining from Glasgow and Manchester. 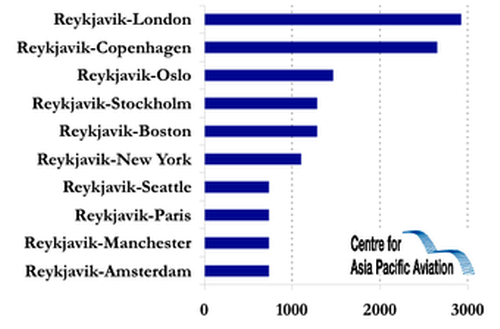 This coming winter, and unusually for Icelandair because of the seasonal nature of much of its traffic base, it will increase in scope by 14% over last winter. An average of 82 flights will depart from Iceland every week from Nov-2010 to Mar-2011, 10 more than last winter. Over the five months Nov-2010 through Mar-2011 the number of flights will be increased by 200. The company will fly to 11 cities in Europe and four cities in North America. The decision to increase winter services will be supported by recently released traffic figures for Sep-2010, which reveal a 22% increase over 2009 and a load factor of 82.2% (+6.9 ppts). The figures for the wholly-owned subsidiary Air Iceland, which operates domestic flights from the downtown Reykjavik Airport, in many cases to very isolated communities, were not so good. Its passenger traffic was down by 6%, though load factor increased by 0.7 ppts to 66.8%.

Getting it together just in time

Icelandair could be said to be getting its act together just in time. The fledgling LCC of five or six years ago, Iceland Express, has turned into a full blown competitor of the like Icelandair has not experienced before. It has acquired a 27-city network that includes two London airports (Gatwick and Stansted), Innsbruck (commences 18-Dec-2010), Luxembourg (where Icelandair’s predecessor Loftleidir first built up its reputation as a transatlantic carrier via Keflavik before abandoning the route in the 1990s) and no less than five North American gateways – New York Newark Liberty; Boston; Chicago; Orlando Sanford and Winnipeg for 2011.

At one time Icelandair would have argued that competition is good as it encourages more vacationers to visit the country so that the economy as a whole benefits. That argument still holds true but Icelandair will be aware its rival is quickly approaching the critical mass level where it could begin to gain the upper ground.

Iceland Express is a sister company of the UK’s Astraeus Airlines, whose aircraft will operate the North American routes. Connections between Europe and North America are offered wherever practical and some services are promoted as originating and terminating outside Iceland, e.g. Gatwick to Winnipeg, taking advantage, just as Icelandair does, of gaps in direct air services or weakness of connection possibilities. The pupil has learned quickly from the master.

To read more on the competition between Icelandair and Iceland Express see the report: Iceland - discount competition for the original transatlantic discounter