Air traffic growth softened in Jun-2011, under pressure from rising jet fuel prices and higher tax rates in some countries. However, the trend for passenger travel remains upwards, but at a slower pace than the post recession rebound, which was at an annual rate close to 10%, IATA noted. 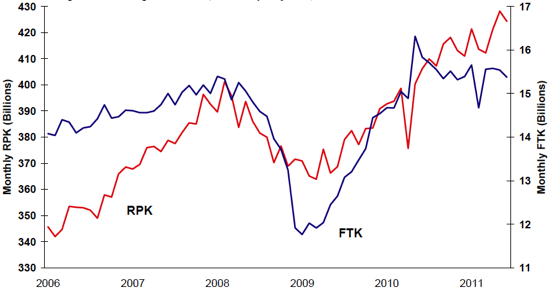 The softening in demand in Jun-2011 follows two months of improving traffic volumes. Passenger demand increased 4.4% in Jun-2011 while freight demand was 3% weaker in the month (freight volumes have not grown since Jul/Aug-2010).   Meanwhile, load factors weakened, as capacity grew at a faster pace than traffic growth in Jun-2011, causing a fall in load factors. However, this is a good level of seat utilization by historic standards but nonetheless is worse than it was last month, and is lower than the peak in 2010, IATA noted.

Despite the slowing growth, the trend in air travel remains upwards. After stripping out the many shocks as well as the seasonality affecting air travel demand, the current pace of growth in the trend is estimated to be 4-5% p/a, according to IATA.  However, the trend is below the 20-year average of 6% and is around half the pace of the post-recession expansion between early 2009 and early 2010. This slowdown reflects slower economic growth and the higher cost of travel, due to the rise in jet kerosene prices and, in some countries, higher taxes on passengers. 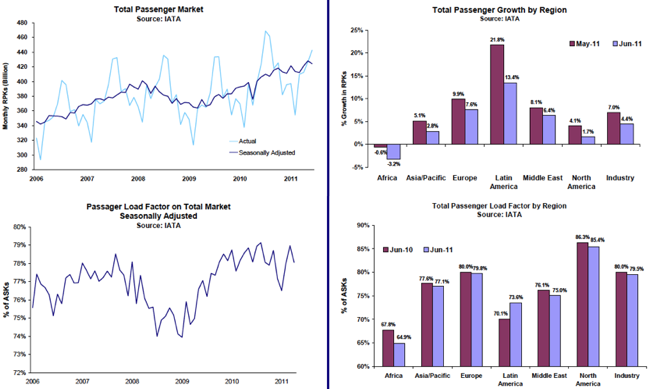 Compared to May-2011, both passenger and cargo markets contracted by about 1%, with load factors also weakening. “For passenger traffic, this is a speed-bump in a gradual post recession improvement. But air cargo continues in the doldrums at 6% below the post-recession peak,” said Tony Tyler, IATA’s Director General and CEO.  Mr Tyler also noted that the “industry is living in several different realities. With high load factors and an upward growth trend, the passenger business is doing better than cargo.”

Meanwhile, the international travel market continues to be stronger than the stronger than domestic markets, which has seen no growth on average since 3Q2011. 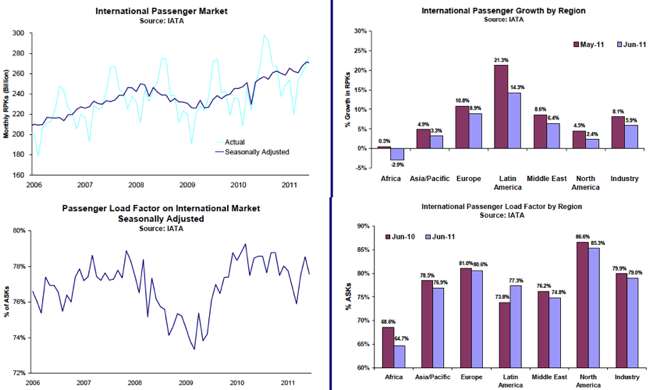 For India in particular this is a very sharp improvement over the situation just two to three years ago when severe excess capacity was causing a lot of problems for airline profitability. Brazil’s load factor is relatively low by comparison, but has also improved substantially from very low levels of seat utilization a few years earlier. Japan’s low load factor reflects the sluggishness of the recovery from the 11 March shock. 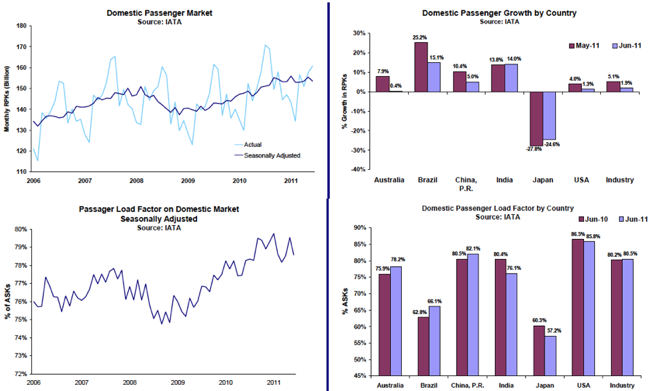 Meanwhile, regional growth patterns are shifting, with IATA noting that the Middle East carriers have moderated to a single digit expansion and tighter economic conditions have slowed China's growth. Meanwhile, Latin America is leading the industry expansion, boosted by strong economic growth and tradef flows, followed by Europe which is growing strongly despite its currency crisis, with many European airlines are benefiting from the trade and business travel generated by the weak Euro. North America, meanwhile, is underperforming the industry on growth but leading on load factors.

IATA noted that the Japanese domestic market is only recovering slowly from the impact of the 11-Mar-2011 earthquake and tsunami, with RPKs still 23% down on Feb-2011 levels. The recovery of international travel to the North African markets hit by civil unrest has been a little faster but even  these markets are still down, at some 4% below Jan-2011.

IATA noted that the trend in air freight is harder to discern but, after the Jun-2011 data, “now looks little better than flat”. International markets are seeing a stronger demand than domestic markets, although even domestic growth is very subdued. World trade in goods continues to expand but other modes of transport are benefiting from this growth, not air, IATA said. 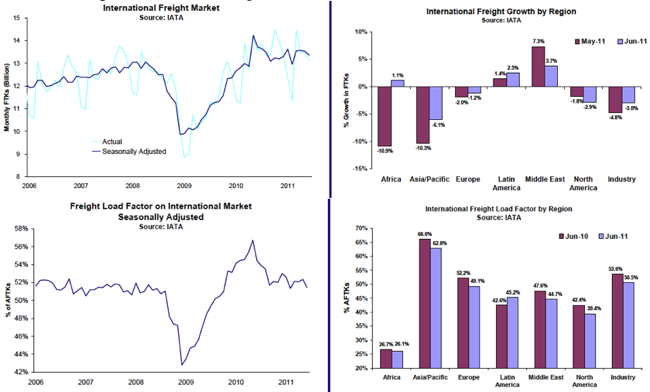 The size of the international air freight market is a little better than the middle of last year and is stronger than domestic air freight but remains 6% smaller than the level reached in May-2010.

Most regions, including the overall total, are now experiencing air freight volumes lower than they were carrying last year. In June-2011, the weakest region was Asia-Pacific, partly due to Japan, since it is a key supplier in the electronics and autos supply chains.

The supply-demand situation has deteriorated further in the past year in the air freight business than it has for the passenger business, which will be a further challenge to the profitability of airlines with a significant freight business.

Meanwhile, load factors on domestic markets are generally half that achieved on international markets, so the overall freight load factor for commercial airlines in Jun-2011 was 45.7%, compared to 50.5% on international markets alone. With significant new capacity due to arrive later this year it may prove challenging to sustain even these levels of freight capacity utilization, IATA cautioned. 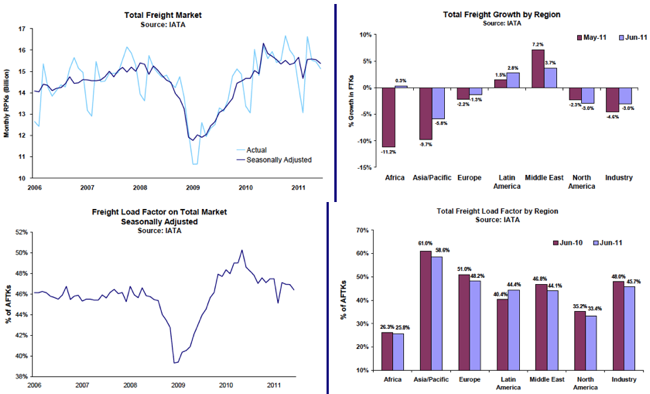 IATA reiterated that it is forecasting an industry profit of USD4 billion for 2011 which is a 78% fall from the USD18 billion that the airlines made in 2010. On anticipated revenues of USD598 billion, this translates to a net industry margin of 0.7%. Based on a forecast average oil price of USD110/barrel for 2011 and a jet fuel price of USD126.5/barrel, the industry fuel bill is expected to be USD176 billion which accounts for 30% of costs.

“What is clear is that the rising jet fuel price is putting pressure on the bottom line. The average price for the second quarter was USD133/barrel which is an increase of USD10 over the first quarter. With an expected profit margin of only 0.7%, the ability of airlines to recoup this cost is critical to staying in the black for the year. Slower economic growth makes these challenges all the more difficult. It is certainly not the time to burden the industry with increases in other costs, including taxation,” Mr Tyler said.

IATA also stated that as airlines start publishing 2Q2011 result would reflect better passenger market conditions than in the first quarter. On average passenger traffic strengthened and load factors rose during the quarter while freight markets saw less of a rise in volumes and little improvement in load factors. Moreover, jet kerosene prices increased by more than USD10 a barrel between quarters, to average USD133/b in the second quarter. The very different experience for airlines, between geographical markets and between passenger and freight markets, will be a significant influence on whether they have been able to recover the rise in fuel costs, IATA added.