IATA more than halved its forecast for airline industry net profits in 2011 to USD4 billion, with passenger and cargo demand seen to be weaker than previous estimates announced in Mar-2011. IATA cited the impact of high fuel costs, unrest in the Middle East and the impact of Japan's 11-Mar-2011 earthquake and tsunami for the 54% reduction in its outlook from the USD8.6 billion profit forecast in Mar-2011.

The world’s airlines are now expected to report a USD4 billion in profit in 2011 on sales of USD598 billion, for a “dismal” margin of 0.7%. CEO and director general Giovanni Bisignani stated that with such a weak margin, "there was little buffer left against further shocks".

IATA, whose members account for 93% of global passenger traffic, in Mar-2011 forecast global profits of USD8.6 billion in 2011, marking a decline from a Dec-2010 forecast of 9.1 billion. IATA members reported a combined net profit of USD18 billion in 2010 (revised from USD16 million), meaning the 2011 result will mark a 78% slump on last year’s profit levels. 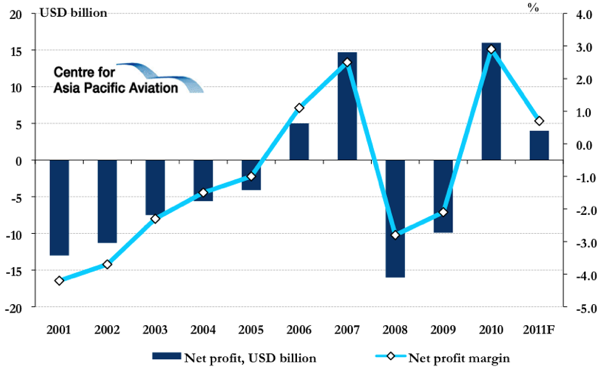 “Natural disasters in Japan, unrest in the Middle East and North Africa, plus the sharp rise in oil prices have slashed industry profit expectations to USD4 billion this year. That we are making any money at all in a year with this combination of unprecedented shocks is a result of a very fragile balance. The efficiency gains of the last decade and the strengthening global economic environment are balancing the high price of fuel,” Mr Bisignani said.

“This year started in a very difficult way with the unrest in the Middle East and the crisis on fuel,” Mr Bisignani added in an interview with Bloomberg Television. The aftermath of the 11-Mar-2011 earthquake in Japan, which accounts for almost 10% of global airline sales, has also been a “nightmare”, he said.

Fuel to represent 30% of industry costs as forecast raised

The cost of fuel, however, is the main cause of reduced profitability. IATA has raised its forecast for the average price of Brent crude from USD96 to USD110 per barrel, marking a 15% increase over the previous forecast.

On a more positive note, Mr Bisignani stated the industry has “built enormous efficiencies over the last decade. In 2001, we needed oil below USD25 per barrel to be profitable. Today, we are looking at a small profit with oil at USD110 per barrel.”

In another positive development, robust economic conditions have given airlines some scope to partially recover higher fuel prices. IATA has increased its forecast for global GDP growth in 2011 from 3.1% to 3.2%, although this will be negated by high fuel costs and rising fares were hurting demand.

However, IATA noted that “the problem is that higher travel costs are now weakening price-sensitive demand and airlines are not expected to be able to offset higher costs with increased revenues”.

IATA now expects passenger demand to grow 4.4% in 2011, down from a forecast of 5.6% in Mar-2011. Premium passenger growth has dipped from the 9% of 2010, but is expected to be close to the historical trend in 2011 at a 5–6% rate. The volume of leisure travellers has fallen by between 3% and 4% over the past five months as travel costs were increased due to higher fuel costs and in Europe, new passenger taxes.

Global airline capacity is expected to increase by 5.8% in 2011, which is above the 4.7% anticipated demand increase. The gap between capacity and demand growth has widened to 1.1 ppts from 0.3 ppts in the previous forecast.

Due to schedule commitments and fixed costs, capacity adjustments are expected to continue lagging behind the fall in demand, driving load factors down. By Apr-2011, passenger load factors were hovering around 77%. This is more than a full percentage point below the 78.4% achieved for international traffic in 2010. Aircraft utilisation is also falling. This decline in asset utilisation is the most significant downward pressure on airline profitability. 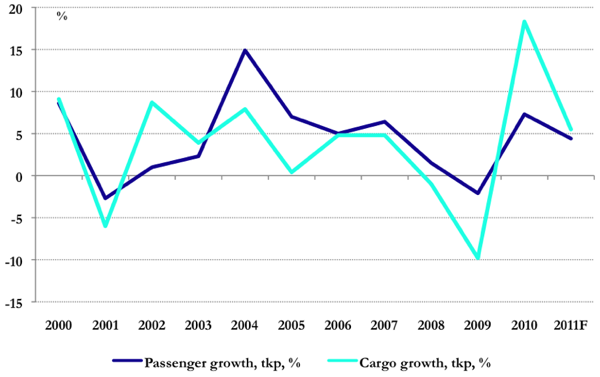