Hawaiian Airlines CEO Mark Dunkerley in early Dec-2010 stated the carrier, which commenced its first services to Tokyo Haneda last month, may add another Asian destination in 2011, possibly in Japan. The destination would be in addition to service the carrier plans to launch to Seoul Incheon on 12-Jan-2011, with further expansion planned in South Korea for the year.

Hawaiian, like other US network carriers, is adding capacity to Asia, lured by expanded airport access and travel growth. Asia Pacific traffic has increased 10.1% in the 10 months to Oct-2010 outpacing growth of 7.2% in North America and 5.0% in Europe, according to IATA. 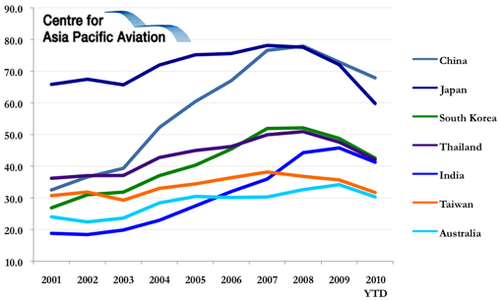 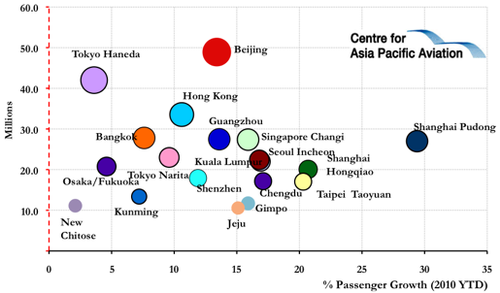 Future growth will no doubt be driven by China, which in 2Q2010 overtook Japan as Asia’s largest economy, capping the nation’s three-decade rise to emerging superpower. China led the world out of last year’s global recession with an economy that is now more than 90 times larger than it was in 1978, when China started its move away from Communist policies in favour of free market reforms. 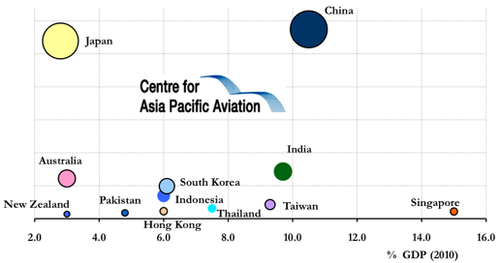 Hawaiian Airlines commenced non-stop service between Honolulu and Tokyo Haneda Airport on 17-Nov-2010, becoming the first US carrier to commence service from the new international terminal at Haneda.

The carrier also plans to launch Honolulu-Seoul Incheon service on 12-Jan-2011. The company will initially operate both new international routes using its B767 aircraft before transitioning to its new A330 aircraft. Hawiian and ANA, in Oct-2010 also signed a commercial partnership agreement and LoI to explore bilateral cooperation in areas such as codesharing, frequent flyer programmes and cargo, subject to government approvals

Mr Dunkerly commented: “Expansion into Asia is a strategy. We clearly want to, and intend to, build a sort of brand image, name recognition, in these markets. That becomes progressively easier the more service that you put into these markets. Assuming everything continues to go as well as it looks now, I think you can expect to see one to two new Asia destinations per year. That’s where the growth is. That’s where the people who are likely to travel live.”

The CEO added that the carrier’s Haneda service connecting Honolulu so far are “working out better than we anticipated" adding that load factors are at more than 80%. Mr Dunkerly also commented that Haneda enjoys a fare premium over Narita. The carrier previously has stated that Haneda represents the "most significant" international expansion for the carrier and "starts the company on a course for future growth to other major Asian markets".

To support the carrier’s Asian aspiration, Hawaiian on 29-Nov-2010 increased its firm commitments for A330-200 aircraft from ten  - including three already in service - to 16, with the additional six to be delivered between 2012 and 2015. The carrier exercised six A330 purchase rights under the terms of its 2008 purchase agreement with Airbus and acquired additional purchase rights in this transaction, leaving it with a total of four purchase rights remaining. The aircraft will be powered by Trent 700 engines.

United has the largest Pacific capacity (ASMs) and traffic (RPMs) among the US majors, despite capacity reductions in recent years, followed closely by Delta. Continental and American’s Pacific capacity is much smaller. 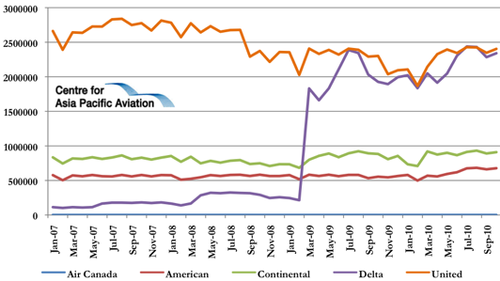 Source: Centre for Asia Pacific and airline reports
NB: Delta’s jump in capacity in early 2009 coincided with its merger with Northwest Airlines 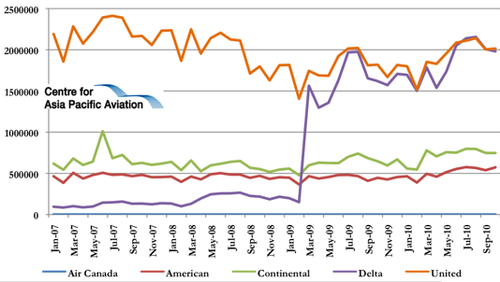 Source: Centre for Asia Pacific and airline reports
NB: Delta’s jump in traffic in early 2009 coincided with its merger with Northwest Airlines

Japan and the US formally signed an open skies MoU on 25-Oct-2010 moving the process a step towards establishing full open skies between the countries. The agreement is the first major change of a 1952 aviation agreement between the US and Japan since 1998. The countries signed a draft open skies treaty in Dec-2009.

Restrictions eliminated under the accord include a restriction permitting only three US carriers – Delta, United and FedEx Corp – to serve all Japanese markets with unlimited frequency. Hawaiian Holdings, United Parcel Service and US Airways Group are among other US carriers that no longer face flight restrictions under the agreement.

Hawaiian Airlines, Delta and American Airlines also all gained permission to operate to Tokyo Haneda this year under the agreement. Haneda is 10 miles south of central Tokyo, while the city’s main airport, Tokyo Narita, is located about 44 miles away. See related article: Haneda Airport expansion is a game changer for Tokyo

ANA, JAL, United Continental Holdings and American Airlines welcomed the move with the carriers, after receiving antitrust immunity in Nov-2010, now able to execute a trans-Pacific JV with their respective Japanese alliance partners. United, Continental and US Airways will partner with Star Alliance partner ANA, while American Airlines will partner with JAL. SkyTeam’s Delta does not have a Japanese partner.

ANA’s Star Alliance has the largest presence at Haneda with a 54% capacity share, followed by JAL’s oneworld with a 35% stake. SkyTeam only has a 1% capacity share. 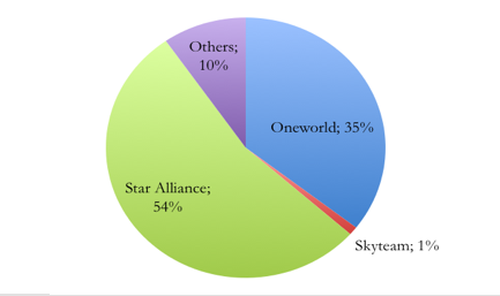 Star Alliance is also the largest alliance at Tokyo Narita with a 37% capacity share, ahead of oneworld (27%) and SkyTeam with a 23% share. 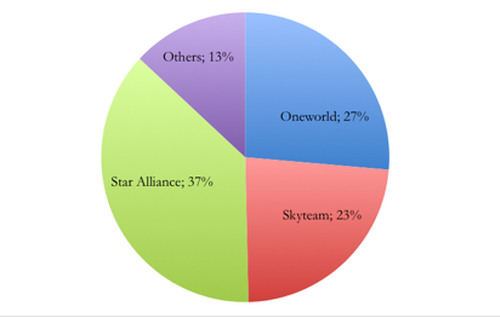 Tokyo Haneda expansion and the alliances