Hawaiian Airlines is readying for a slow-down in expansion after an ambitious push into long-haul international markets that has encompassed the introduction of more than 10 new destinations during the last few years.

The slowdown is occurring as industry capacity in Hawaiian’s US mainland markets is rationalising and a new revenue management system is helping to improve performance at the airline’s Maui hub.

Despite continuing currency headwinds, Hawaiian remains bullish on its long-term outlook for Japan, which during 3Q2013 represented half of the airline’s international network. With the planned slowing of growth, Hawaiian appears to be laying the groundwork to hunker down and effectively manage the maturation of the new routes that have come online. 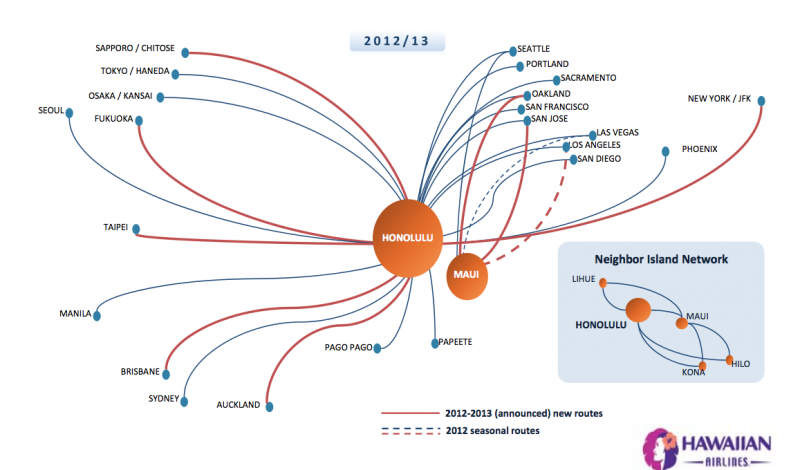 While Hawaiian has been aggressively diversifying outside of North America during the past few years, in 3Q2013 the region still represented 47% of its total passenger revenues. After numerous quarters of overcapacity in those markets carrier CEO Mark Dunkerley recently explained that Hawaiian’s own capacity in those markets increased slightly less than 1% during the quarter, which helped lift the carrier’s passenger unit revenues in the region of 10%.

Alaska Air Group, another carrier with a major presence in the Hawaii-US mainland market, also cited favourable unit revenues in its Hawaiian markets in 3Q2013 after its unit revenue declined 6% on those routes in 1Q2013. Alaska in early May-2013 removed the equivalent of two aircraft from its Hawaiian operations that resulted in a paring of frequencies to Kona and Lihue.

Mr Dunkerley stated that during 3Q2013 industry capacity fell 1% year-on-year in Hawaiian’s North American markets compared to double-digit increases from 3Q2012 to 1Q2013, and a 5% rise in 2Q2013.

Going forward, he estimated industry capacity from Hawaii to North America would fall by 3% during 4Q2013 and 1% in 1Q2013.

Hawaiian also enjoyed a significant unit revenue bump in its inter-island markets during 3Q2013 of nearly 16%, and markets accounted for 23% of the carrier’s revenue during the quarter. The favourable unit revenue performance is against a backdrop of 8% capacity growth in those markets since 2011, driven in large part by the debut of Maui as a new hub in Jan-2012. During 2012 the carrier made capacity adjustments and changes to its schedules to better optimise connections in Maui.

In addition to changes to improve the supply-demand balance in Maui, Hawaiian is using a new revenue management system to develop a re-aligned fare structure in those markets to expand the number of fare options on those routes.

Hawaiian posted a completely different set of results in its international markets during 3Q2013, which accounted for 30% of the carrier’s total passenger revenues.

Passenger unit revenues declined 17.7% year-on-year in those markets, with currency fluctuations accounting for 11ppt of the decline. Mr Dunkerley warned that if the USD remains at the current trading rate to the Japanese yen and Australian dollar, “then we’ve got another six-months plus of unfavourable foreign exchange rate comparisons”.

Hawaiian took a USD13 million hit net of hedging during 3Q2013 as a result of the currency pressures. Its markets in Japan represent roughly half of the airline’s international network, and comprise a mix of routes ranging from those that are close to reaching maturity (Tokyo Haneda launched in Nov-2010) to new markets (including Sendai introduced in Jun-2013).

Mr Dunkerley remarked that within Hawaiian’s Japanese network there are routes that are doing well, markets where the carrier is encountering competitive pressure and others that are in the early stages of service. Previously, Hawaiian has stated that Fukuoka, which launched in Apr-2012, ramped up slower than expected. During the route’s initial ramp-up Delta Air Lines expanded its service from Honolulu to Fukuoka in late 2012.

Mr Dunkerley stressed that despite the continued currency headwinds, Hawaiian over the long term is bullish about Japan, evidenced by its recent request to US authorities to receive rights to a route to Haneda recently vacated by American for proposed service from Kona.

Reiterating Hawaiian’s staying power in Japan, Mr Dunkerley declared: “We can make money where the exchange rate has now settled...and indeed, we can succeed in Japan at a Yen value below today’s mark.”

Hawaiian’s CEO also declared the carrier is the only airline who initially won rights to serve Haneda in 2010, “to have made a commercial success of them”.

It looks as if Hawaiian’s Honolulu-Seoul route that debuted in Jan-2011 will take more than three years to reach maturity as demand has fallen short of the carrier’s expectations, Mr Dunkerley said.

During mid-2012 one-way seat capacity in the market increased by 38% on the pairing as Asiana Airlines matched Hawaiian’s daily service in the market. Hawaiian’s CEO explained the company would have expected demand to catch up with capacity by now, but slower than expected economic growth has prohibited that scenario from occurring.

At the end of 3Q2013, Hawaiian, Asiana and Korean Air offered roughly 7,945 one-way seats in the market, according to schedules in Innovata, which was lower than the nearly 8,200 the year prior. 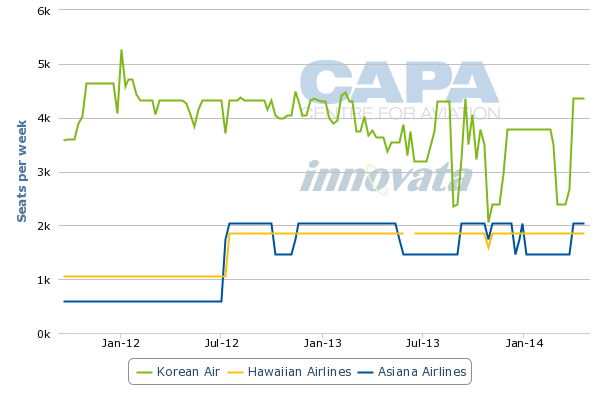 Mr Dunkerley expects industry capacity between Honolulu and Seoul to fall roughly 10% during 4Q2013, which perhaps should ease a small portion of the pressure Hawaiian faces in turning its fortunes on international routes. Similar to its outlook on Japan, Hawaiian believes the growing middle class in Korea presents opportunities for the carrier, and over the long term the supply-demand imbalance will right itself.

Hawaiian braces for currency pressure in its Australian markets

On its routes to Australia and New Zealand, which represented one third of its international revenue in 3Q2013, industry capacity growth on a sequential basis slowed from a 19% year-on-year rise during 2Q2013 to a 1% increase in 3Q2013

While Mr Dunkerley remarked that Hawaiian’s Sydney-Brisbane service that debuted in Nov-2012 developed more quickly than the system average, he warned that longer booking curves in Australia would result in Hawaiian feeling the effects of Australian currency pressure that began earlier in 2013 to hit the carrier more significantly in 4Q2013 and into 2014. The Australian dollar fell some 15% in a matter of weeks in mid-2013, although it has since risen about 5% from those lows.

Even as Hawaiian’s results varied widely among its various geographical regions during 3Q2013, the carrier remained profitable as net income fell from USD45 million to USD41 million year-on-year.

Top-line revenue growth of 9% to USD599 million was lower than the 10.6% increase in expenses to USD525 million which triggered a slight decrease in operating income from USD75 million to USD74 million. 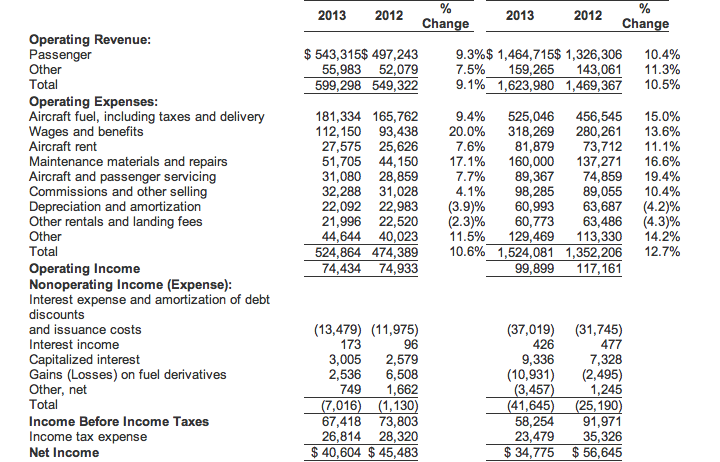 On a unit basis, the carrier’s unit revenues were flat year-on-year during 3Q2013 while unit costs rose 2%. During 3Q2012 Hawaiian recorded a favourable performance in its maintenance and compensation line items. Unit costs could rise between 2% and 5% in 4Q2013, largely related to adjustments in frequent flyer accounting.

After recording 18% capacity growth during 9M2013 Hawaiian during 4Q2014 will grow its supply between 3.5% and 5.5%. During the past two years Airbus A330 deliveries have been front loaded toward the first half of the year, the carrier explained.

One A330 widebody is scheduled for delivery in 4Q2013 while two Boeing 767s are exiting the carrier’s fleet during that time. Overall, with deliveries and retirements, Hawaiian will add a single widebody aircraft in 2013.

Mr Dunkerley concluded that Hawaiian is now entering a different phase as both capacity growth and the launch of new service will slow down, which seems wise given there are quite a few routes still in the process of maturing.

With two of its three geographical entities turning solid performances, coupled with a slowdown in new route deployment, perhaps Hawaiian can now turn its attention to improving its performance in long-haul international operations.

It assures that despite currency pressure it has made the right decisions and believes that the long-haul expansion will bear fruit. While its profits for 9M2013 declined by USD22 million to USD35 million, at least it remained profitable during tough market conditions on its international routes.  If the carrier can sustain profits despite weak conditions in its international markets during the last few months, surely it can bolster its bottom line as it now focuses on getting those routes up to speed.