Harbin Airport seeks a hub role for Russia and Siberia, but home airlines are less interested

Siberia-China seat capacity grew 202% between 2003 and 2012 and China's northern City of Harbin is now jockeying to become a network hub for Siberia. The airport accounts for 15% of Siberia-China capacity, far less than the largest Chinese airport, Beijing, 1000km to its southeast. Harbin offers geographical advantages to Siberian cities in the far east while Beijing can serve those with some circuitry as well as western Siberian cities. Urumqi in China's far west could also be a hub for Siberia, supporting China Southern's development of Urumqi as a West Asia/CIS hub.

The motivation is simple. Siberia's 40 million population has proven an increasingly important trade relationship for China – so much so that in the economic turmoil of 2009, Siberia was the only part of Russia to maintain a positive investment trend. China is tapping Siberia for resources ranging from wood to oil and, increasingly, hydroelectricity from Siberia's numerous rivers. Russia's largest private energy company forecasts Siberia's GDP could triple in 15 years.

Siberia-China market has grown 202% since 2003, albeit from a low base 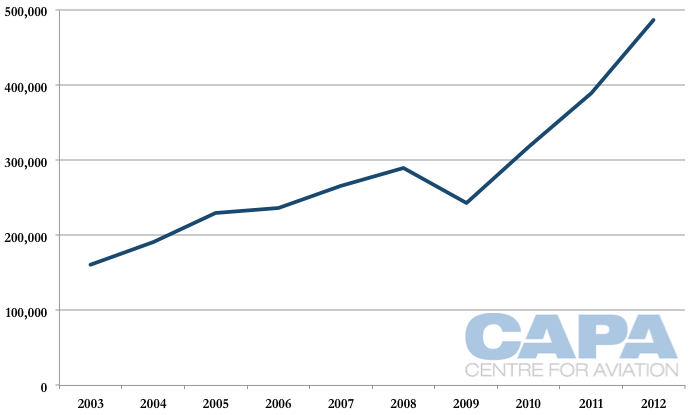 In 2012, three Chinese carriers – Air China, China Southern and Hainan – accounted for 17% of the market, down from China's share of 20% in 2003. International imbalances with China having a lower share is typical as China's carriers focus on their domestic market.

Beijing Airport accounts for most traffic to Siberia

Beijing sees 66% of all Siberian passenger traffic while Harbin is second largest with a 15% share despite China's regulator the CAAC designating Harbin as China's gateway to Russia. 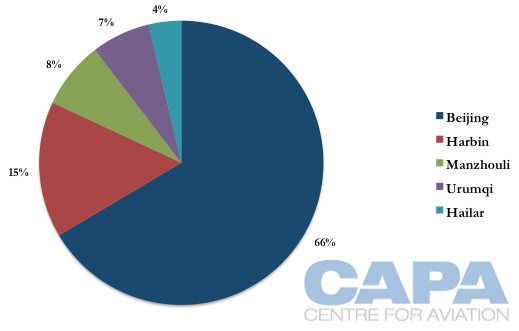 Beijing sees nine routes to Siberia while Harbin is home to eight. Beijing's largest route is to Vladivostok, southeast of Harbin, giving Beijing a geographical advantage for linking China to the city. Beijing's next largest Siberian destination is Koltsovo, half way between Moscow and Novosibirsk. Koltsovo is also about three-fourths of the way between Beijing and Moscow. Novosibirsk is Beijing's fourth largest Moscow route while Khabarovsk, near Harbin, is Beijing's fifth largest Siberian route.

Whereas Beijing serves routes across different points in Siberia, Harbin's routes are more clustered around the eastern part of Siberia closest to Harbin: Khabarovsk, Vladivostok, Khomutovo, Yakutsk and Irkutsk, although Harbin does see service to farther-flung Krasnoyarsk, Novosibirsk and Koltsovo.

Harbin offers geographic advantages to the China-Siberia market, but the larger status of Beijing – scarcely a neighbour at 1,000km distance, but still not enough to prevent it being a competitor – will continue to give it a lead, even if connections are longer than if they transferred through Harbin. Beijing serves 114 domestic Chinese cities to Harbin's 41, an important advantage on a network feed basis. Beijing also offers wider international options for the very small – but with resource industry, potentially growing – sixth freedom demand.

All of Harbin Airport's Siberian flights are served by Russian carriers. China Southern has a base at Harbin it could use to feed traffic to Siberia, but convincing China Southern to move away from its domestic and high profile long-haul international routes to tiny Siberian markets could be difficult. Its eyes are on larger, higher profile, prey. 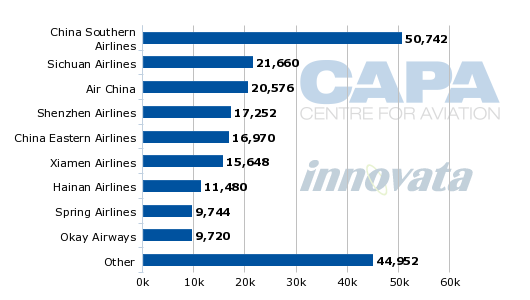 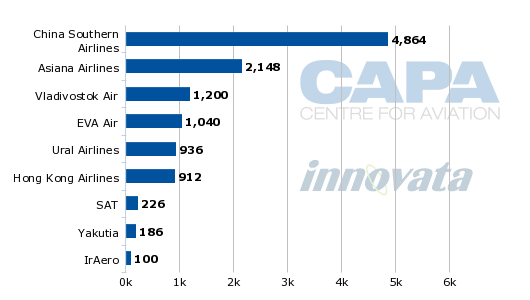 Thus the China-Siberia market is not about who will be largest – with Beijing near-invincible – but rather second largest. Urumqi, in China's far west, is the fourth largest Chinese hub for Siberian flights and China Southern has already turned it into a hub for West Asia/CIS flights, as well as Moscow and further considerations in Europe. As part of launching international flights, China Southern has strengthened domestic flights to support transfer traffic.

This would potentially be ideal for connecting China-Siberia flights as the connecting feed is largely in place, unlike at Harbin. Urumqi is also far closer to many Siberian cities, potentially allowing for new services to be opened with smaller aircraft or for existing services to see increases in frequency if moved to Urumqi. Urumqi will not, however, be able to compete with the cluster of cities in Siberia's far east, such as those around Japan and North Korea.

Harbin along with Dalian and Shenyang is leading the economic revival in China's northeast, once a rustbelt.

Harbin is China's northernmost city with an immediate population of four million and greater population of 10 million. It has a growing and diversifying economy, but for now centred around agriculture and light industry. It is far better known for its winter ice sculpture festival, the main tourist attraction, but cool summers offer a retreat from China's infamous heat. Year-round Harbin has the rare quality in China of being a relaxing city.

The smallest of China's northeast airports, China Southern has the largest presence for domestic and international capacity. Seoul, Taipei and Hong Kong are the top international destinations from Harbin. Owing to its close proximity to Russia, Harbin retains Russian elements, including an Orthodox Church, and sees flights to Russia.

A decade ago as the boom was well underway in Beijing, Guangzhou, Shanghai and Shenzhen, China's northeast was a sore point. Once the epicentre of state-owned enterprises, the northeast had become a rustbelt. Figures on state-owned companies vary; some say they were responsible for two-thirds of the region's GDP (despite being unprofitable) while the oil industry alone was responsible for 80% of profits. As the need for efficiency caught up to the region, state-owned enterprises dismissed workers, leading to significant social unrest.

Shortly after China, with all its central planning might, launched a "Develop the West" campaign, it started a "Revitalise the Northeast" campaign. Whereas the northeast had been centred on oil as well as steel and coal, diversification was the objective. Some reports speak of four key pillars – petrochemicals, metallurgy, machinery and electronics – for the region while others also include automobiles, professional services and power generation.

There is still a bent towards state-owned companies: Liaoning is home to 37 Fortune 500 companies while in the west, the city of Chengdu alone boasts links to half of them. There are a myriad of R&D centres and high-tech zones, which could bode well for carriers: Cathay Pacific reports the IT industry in China accounts for a greater share of premium travel than the industry in other markets.

The Economist reported that from 2006 to 2009 the northeast's GDP "grew faster than that of the country's other three main economic regions, in the east, centre and west. It has outpaced national GDP growth every year since the late 1990s, with a markedly wider lead since 2008." Its sister publication The Economist Intelligence Unit forecasts that Liaoning alone by 2014 will be the largest recipient in China of FDI.

Japan and Korea are the leading the way, but US electronic firm Intel opened in 2010 a USD2.5 billion chip factory in Dalian, in southern Liaoning. Economic growth has not come with the wide social disparity as found in other regions: to quell early discontent and protests, Liaoning was the home of what is generally regarded as China's first experiment with (effective) social welfare.

As disposable incomes increase and business becomes more sophisticated and expansive, the calculation is right for greater air services in northeast China, with three main airports to choose from.

South Korea is a competitor to Harbin's Siberian ambitions, while Chinese airlines have other priorities

The competition is however not just at home. Harbin is trying to carve an international niche, notable as many Chinese airports focus on the domestic market with little thought on international positioning. But its position in northeast China has a competitive overlap with South Korea, whose carriers pump ample capacity into China (they are the largest foreign carriers in China after Dragonair) and into nearby northeast China in particular, where historic cultural and economic ties run deep. Asiana and Korean Air are also players, to varying degrees and effectiveness, in sixth freedom markets.

South Korea sees about 5,900 weekly Siberian seats to China's total of 13,100. Korea has service to only four Siberian cities but is achieving more as a hub than any Chinese airport, as Asiana and Korean Air collectively account for 89% of Korea-Siberia capacity. Asiana and Korean Air have twice as much capacity to Siberia as their Chinese peers do.

Like many hub stories in Chinese aviation, Chinese carriers and airports have a theoretical advantage in terms of scale and geography, but details – constructing networks, international marketing, bloated cost bases – see that advantage whittled away.

Chinese carriers are making improvements, but the question for this decade is how much they can realise of what could rightfully be "theirs". As Middle Eastern network carriers and low-cost carriers have shown, traffic patterns can change, especially where there is a geographic advantage – but it requires intelligent strategies and a lot of application.