Growth in Chile’s domestic passenger market was flat during the first eight months of 2015, in a region that was one of Latin America’s fastest growing areas just a couple of years ago. The slowdown is driven in part by overall sluggish economic growth within Latin America and the weakening of Chile’s currency.

It is not obvious when domestic passenger growth will resume, but the general consensus is Latin America’s economy will likely remain weak throughout 2016. At the same time domestic passenger numbers are leveling off, Chile’s second largest airline Sky appears to be shifting its business strategy from a hybrid offering to a more pure low cost model.

Chile did enjoy solid growth in international passengers during the first eight months of 2015, reflecting growing tourist numbers and perhaps a strategy by the country’s largest airlines to allot capacity to higher yielding regions.

Data from Chile's JAC show passenger levels in the country's domestic market from Jan-2015 to Aug-2015 were flat year-on-year at 6.5 million. It reflects a slowing of growth in a market that was growing rapidly between 2011 and 2013, posting double digit increases in domestic passenger levels. 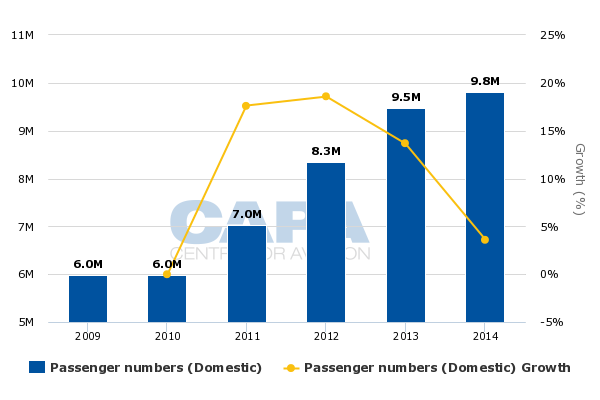 Given the economic flux, it is a positive sign that Chile’s domestic market did not contract for the first eight months of 2015; but Latin America’s economy is not improving for the remainder of the year, which could result in some contraction of annual domestic passenger growth in Chile during 2015.

The LAN Group and Sky Airline remain the dominant companies in the Chilean domestic market. LAN Express held a 49% market share for the first eight months of 2015, up 5% year-on-year. LAN posted a 25% market share, which was down nearly 8% from the year prior. LAN has opted to use LAN Express as the growth engine for its domestic services in Chile, and with the country’s economy in a tenuous state, it is not surprising that LAN’s market share has dropped.

PAL Airlines, which held a 3% market share in Chile during 1H2013, suspended operations in Sep-2014, citing unfavourable economic conditions in the country.

Sky Airline's domestic market share increased roughly 4% year-on-year during the first eight months of 2015, to 24%. Sky transported 1.6 million passengers in the domestic market compared with 1.5 million the year prior. LAN Express grew its passengers to 3.2 million from 3 million and LAN’s passenger levels fell from 1.8 million to 1.7 million.

Sky presently serves 13 domestic destinations. (It also serves four international markets – Buenos Aires, Sao Paulo, Lima and La Paz). Data from CAPA and OAG show that for the week of 27-Sep-2015 seat counts are up on nearly all of Sky’s top domestic routes by seat deployment with the exception of La Serena to Santiago and Santiago to Copiapo.

In five of those markets – Santiago to Arica, Antofagasta, Puerto Montt, Iquique and Calama to Santiago – both Sky and LAN have bolstered their seats on offer year-on-year.

The seat increase in those markets coupled with Chile’s weaker economy is the probable cause of both airlines experiencing yield weakness. But Sky could be expanding to ensure it continues building key domestic market share, even if it means some yield weakness in the short term.

Sky’s strategy generally has been to operate with a low cost structure with a full service product offering. But that seems to be shifting as reports have indicated the airline is starting to transition to a more pure low cost model. New outlet El Mecurio, quoting Sky executives, recently reported that the airline is considering charging for checked bags, and will start charging for food in 2016. Sky is also aiming to boost aircraft utilisation from an average of 8 hours to 10 hours per day, the news outlet reported.

Airline CEO Holger Paulmann told the news outlet that given Chile’s open sky policy, if Sky did not adopt a full low cost business model, another airline from the outside could have opted to pursue a low cost opportunity in Chile.

CAPA has previously reported that the Chilean market has been ripe for LCC penetration given the dominance of LAN. At one point the LCC group Viva was examining Chile, but ruled out pursuing the establishment of a Chilean airline in favour of Peru. But roughly two years after declaring its intentions on Peru, a Viva carrier has still failed to materialise in the country.

Sky has the benefit of years long competition with LAN, so it can use that knowledge base to apply the LCC strategy in Chile. It already operates a fleet of Airbus narrowbodies, which serve as the fleet of many LCCs worldwide. If Sky can get its cost to levels where it can stimulate demand in a slow market, it stands a reasonable chance of achieving success as a pure low cost carrier. However, it is making the transition at a time when general economic weakness has swept Latin America – 1% GDP growth is expected for 2015.

Source: CAPA Fleet Database
Orders include those placed directly by the operator and by lessors assigned to the operator, from 30-Sep-2015 onwards.

Chile’s international growth was strong during the first eight months of 2015, with an increase of 10.7% year-on-year to 5.4 million. LAN, TAM and Sky captured the bulk of those passengers with market shares of 51% for LAN and 6% for both TAM and Sky. LAN’s share increased 16% year-on-year, TAM’s 11% and Sky’s 12%.

The country’s tourist arrivals reached 3.7 million in 2014, and steadily increased each month through Jul-2015. Despite the weak economies in Argentina and Brazil, they were the number one and two markets for Chile measured by tourist arrivals in 2014 at 42% and 13%, respectively. 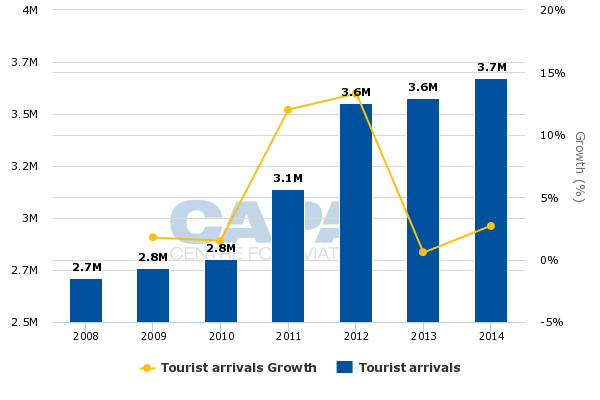 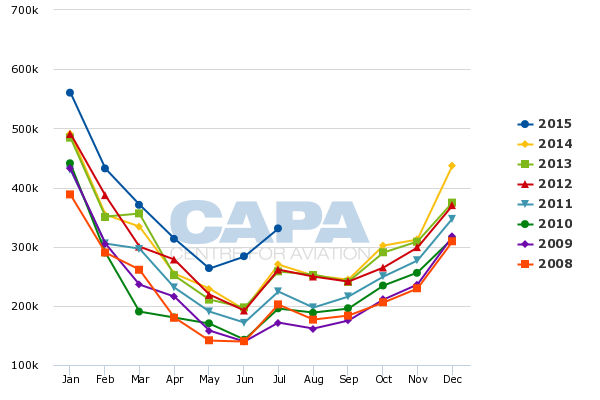 LAN plans further international growth from Chile in late 2015 with increased frequencies on its Santiago-Cancun-Miami routing and the launch of service from Santiago to Milan with a layover in Sao Paulo, replacing TAM on the Sao Paulo-Milan leg. During 2016 the airline plans to add frequency on its flights from Santiago to Lima.

Santiago remains a key hub for LAN as adds international capacity to regions where economic prospects are more solid than Latin America.

Although Chile’s domestic market has long been dominated by two airlines, a shift seems under way to inject some true low cost competition into the market place as Sky moves to establish itself firmly within the framework of that business model. Sky appears to be working to get its costs to a level that allows it set pricing points to stimulate passenger traffic.

Sky will have to work to achieve success with the shift in its business strategy, but Chile is a long overdue for true low cost competition, and with the region’s economy continuing to show signs of prolonged weakness, a greater proportion of passengers is migrating to the price sensitive segment.