A year ago, Standard and Poor’s Ratings Services (S&P) anticipated the market would decline in 2009 and that airports would show a diverse degree of resilience. This has proven to be the case. In the next year, improving passenger volumes will have a steadying effect on credit quality but, while mid-term prospects for EU airports are stable, the long-term is unclear. Air traffic is likely to be more or less flat for EU airports in 2010, with a modest rise in 2011. As a result, the return to growth may be a slow and protracted one rather than a bounce back to 2007 levels.

Indeed, it is questionable whether the airport industry will return to its previous pace of growth in the medium to long term. After difficult conditions and high level of downgrades in 2009, about half of airport ratings are at risk of downgrade or have a negative outlook. In this independent, commissioned report, Alexandre de Lestrange, Credit Analyst at S&P's Ratings Services examines which ones are most at risk. 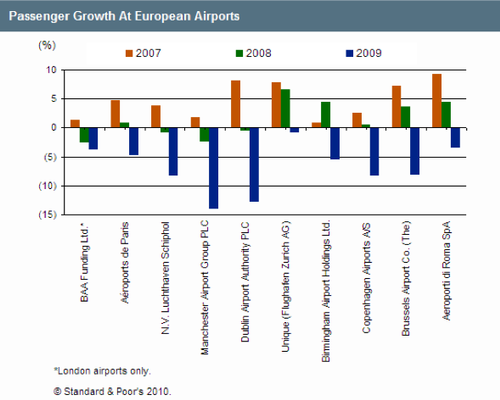 The pace of decline has generally slowed down quarter by quarter as the capacity cuts made by airlines were mostly implemented in late 2008 and early 2009. Indeed, all these capacity cuts were almost immediate responses to traffic passenger declines, which tended to slow down as the year progressed.

As expected, airports have shown diverse resilience in terms of passenger traffic levels. The largest airports have seen the least volume contraction as, in times of stress, airlines have retrenched from the regional and second-tier operators back to their core, high critical-mass hubs. This is due to the value of slots and to airlines' strategy to retain a critical mass (the rationale of operating in hubs). Hubs offer a high number of routes, optimise aircraft turnaround and occupancy, and typically maximise airlines' yields, thanks to strong connections to other flights or other modes of transport, and strong local traffic demand. The exception to this was Amsterdam Schiphol, where the traffic shortfall was above other hubs.

Generally, the impact, if any, of the EU-US Open Skies Agreement in place since Mar-2008 was negligible although it may have benefited some hub airports. For instance, BAA Funding's Heathrow airport benefited from the relocation from London Gatwick airport of some transatlantic flights.

S&P generally believes that the sector has the capacity to withstand somewhat weaker metrics than industrial companies for a given financial profile, because airports' cash flows typically tend to show less volatility in an economic recession than other industries.

The difficulties of 2009 temporarily weighed on airports' financial performances, as they have little influence over traffic volumes in the short term and a predominantly fixed-cost basis that can limit their ability to protect margins when costs rise or revenues fall.

Together with difficult credit markets, which raised concerns on liquidity, declining traffic was one of the main reasons behind the four downgrades in 2009 (after three downgrades in 2008): AdR, BIA, BAC, and DAA. There were some differences with 2006 and 2007, which also saw four airports downgraded. Before 2008, most downgrades were a result of financial policy (such as dividend policy) or changes in ownership. Downgrades also occurred under more favourable economic and financial markets conditions, giving those airports more flexibility to adjust capital structure.

While credit quality has declined over the past couple of years, the ratings remain investment grade for eight out of 10 airports. That said, the median and average credit quality has remained broadly stable at about low 'A'/high 'BBB' at year-end 2009, stable compared with year-end 2007 (before traffic started to decline). However, the current ratings are more focused at low 'A'/high 'BBB' than they were two years ago when there was a larger spectrum encompassing more very high and very low ratings. Ratings on all EU airports except Unique (Zurich) and MAG were lowered by at least one notch over 2006-2009. Unique is the sole issuer whose issuer credit rating is now higher than in 2006.

Currently S&P rates 10 airports, of which four have negative outlooks. This suggests there could be further downgrades for the following:

Passenger volumes to improve in 2010

Several elements suggest that passenger volumes should improve in 2010 over 2009. However, as we expect that the sector will post virtually no growth, with most airports' traffic evolution ranging between negative 2% and positive 2%, we have taken a prudent stance towards 2010 traffic. Our opinion particularly rests on the following:

There could be outliers compared with this central scenario. Those issuers likely to outperform the sector (by 1% to 3%) include CPH, Unique, and possibly Brussels – in a scenario similar to Unique's – now that Brussels Airline has been integrated within the Lufthansa alliance. Also, AdR, thanks to the gradual integration of Alitalia – now merged with Air One – within the Air France-KLM Alliance, could outperform the market again. Conversely, DAA is likely to underperform the sector because of continued economic contraction in its domestic market.

The airport sector, which showed diverse resilience through the economic downturn, would likely continue the same trends under a more favourable economic scenario. This would be likely to lead to diverging evolution between entities whose yields remain low (small airports or those with limited tariff-setting autonomy) and those which benefit from inflation-linked tariffs or quicker traffic ramp up (normally larger/hub airports). The latter could benefit from the current rising contribution of long haul and transfer routes, which are key profit generators as they are typically higher-yielding than short-haul routes.

Financially speaking, revenues will remain flat or rise marginally (in the low-single-digit territory) on stable traffic and low tariff increases. EBITDA could show a marginally more positive evolution than revenues, as we expect some companies to reap the full-year effect of recent cost-cutting measures, which have lowered the breakeven point.

Overall, the sector has globally performed as expected, although some airports proved less resilient than anticipated. Standard & Poor’s expectations, like a year ago, are for a slow recovery of the European aviation industry after the 2009 decline. It appears now that the economic downturn could have longer-term effects and a more pronounced impact on the aviation industry than previously thought. However, the European airport sector and its credit quality have the means to stabilise in the medium term, but long-term forecasting incorporates a fair degree of uncertainty. 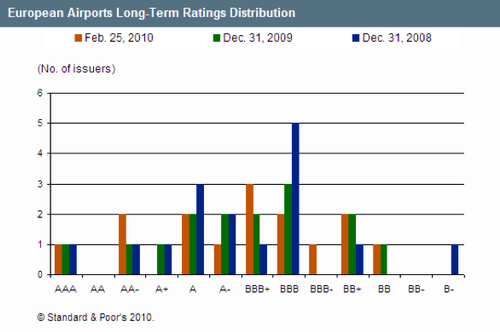 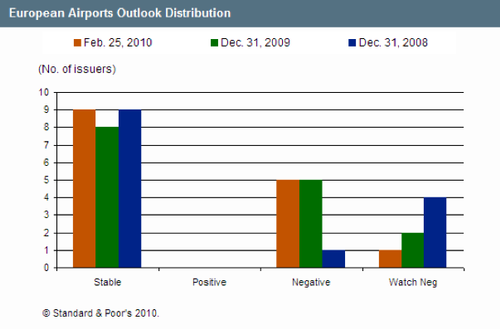