GOL’s shares gained 7.1% on Friday, the largest gain in a month, despite Brazil’s Bovespa index dropping for a second day, paring its third straight weekly gain.

Also in the month, GOL reported that total system traffic (RPKs) by 34.8% year-on-year in Dec-2009 on a 14.3% capacity (ASKs) increase, reflecting both the company’s better positioning in its markets in 2009 (higher frequency and regularity between Brazil’s main airports, strong cost advantages and the revitalization of SMILES frequency mileage programme), and increased demand, which was driven primarily by Brazil’s economy recovery signs. Load factors soared 11.6 ppts to 76.3%.

Southwest, the largest US LCC, stated it expects passenger revenue per ASM to have increased in the 7% range in Dec-2009 – for the fourth consecutive month of increases - thanks in part to a 5.8% capacity (ASKs) reduction during the month. The carrier handled 7.0 million revenue passengers in Dec-2009, a 3.7% year-on-year increase, with load factors up notably, by 6.5 ppts to 76.2%.

Virgin America ruled as a US citizen

In other US LCC news, the US Department of Transportation ruled on Friday that Virgin America remains a US citizen and is under the active control of US citizens. Virgin America applauded the decision confirming the carrier’s financial fitness and US citizenship status. See related article: Sorry Alaska, Virgin America IS American

In the Asia Pacific, shares in Japan's Skymark Airlines slumped 6.4%, while in Europe, shares in Ryanair and easyJet were weaker, down 1.4% and 2.5%, respectively. 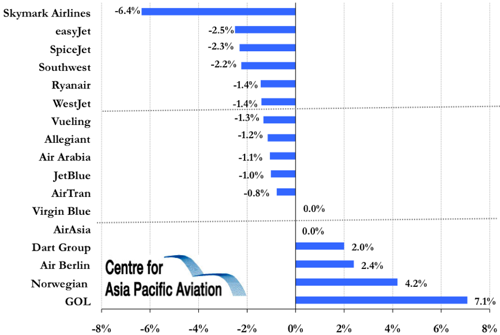