North and South American airline shares rebounded on Tuesday (05-Oct-2010) as a number of carriers reported improved traffic data for Sep-2010 and US markets rallied to a five-month high. The Dow (+1.8%) rose after news the services sector expanded at more-than-expected pace for Sep-2010 and Bank of Japan announced plans to stimulate economic growth.

The gains in airline stocks were despite a 1.7% rise in oil prices for the session to USD82.82.

Republic Airways (+6.8%) was the day’s biggest gainer after reporting a 51% year-on-year rise in passenger numbers in Sep-2010 to 2.7 million. The significant rise was due to its acquisition of Frontier Airlines and Midwest Airlines, which are now operating under the Frontier Airlines brand. Load factor for the group was up 5.0 ppts for the month to 79%, as traffic (RPMs) rose 86% on the back of a 73% increase in capacity.

Frontier generated a 7% rise in traffic on a 5% increase in capacity. As a result, the carrier reported a record load factor for the seventh consecutive month of 83%, up 2% year-on-year.

Delta Air Lines (+2.8%) was also up after announcing it has successfully completed USD750 million in debt reduction and delivering initiatives as part of the company's ongoing efforts to bring its adjusted net debt to USD10 billion by the end of 2012, a reduction of USD7 billion over three years. Delta is taking advantage of the significant free cash flow it expects to generate in 2010 to delever its balance sheet through a variety of actions, including:

The company's debt reduction initiatives will result in a one-time USD350 million charge in the Sep-2010 quarter. This charge is associated with the primarily non-cash loss on extinguishment of debt, including the write-off of unamortised debt discount recorded as part of the Northwest Airlines merger. At the time of its merger with Northwest, Delta was required under purchase accounting rules to record USD1.8 billion of debt discount.

US Airways to end 3Q with USD2,370m in cash and investments

US Airways (+1.2%) stated it expects to end the Sep-2010 quarter with USD2,370 million in total cash and investments, including USD380 million in restricted cash. The carrier also expects to pay between USD2.15 and USD2.20 per gallon of mainline jet fuel (including taxes). US Airways provided the following guidance for its mainline operations:

Jazz Air Income Fund (-0.4%) was the only carrier to slip for the day. The Ontario Superior Court of Justice has issued an interim order permitting the fund to hold a special meeting of its unitholders on 09-Nov-2010 to consider and approve an arrangement to convert the fund from an income trust to a corporate structure pursuant to a court approved plan of arrangement. 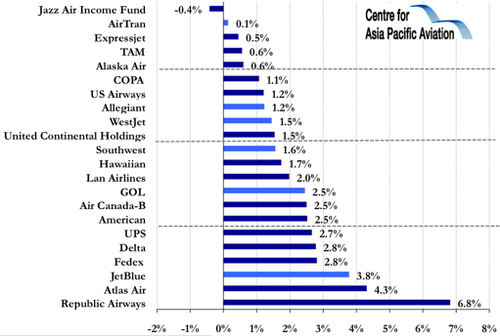