Flybe's stirred not shaken strategy sees it through, for now

Flybe has a different strategy from most other airlines. That’s probably why it has a different bottom line, reporting an improved pre-tax profit of GBP35.4 million for FY07/08 (12 months to 31-Mar-08), on a 46% year-on-year increase in revenue, to GBP535.9 million - and vindicating its acquisition of BA Connect in Mar-07 (Flybe has moved quickly to achieve the originally estimated cost savings and revenue gains of more than GBP40 million p/a, while ending BA Connect’s GBP40 million annual loss). 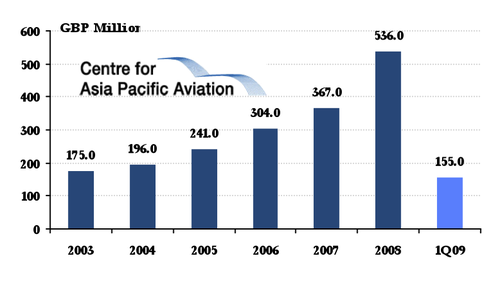 More importantly in the current tough conditions, the first quarter of the current financial year appears to have continued the strong performance, with pre-tax earnings of GBP12.2 million, up 14% on 1Q08, despite a 60% year-on-year increase in fuel costs to GBP32.7 million. Flybe's fuel cost per seat was also up, by 44% year-on-year.

However, there is one significant niggling detail: despite the bare bones reporting of a private company, the 18% increase in passenger numbers for the quarter suggests a reduction in yield (or, at least, in profit per head).

To reduce Winter expansion from 16% to a more modest 6%; beginning to see slowing of corporate travel

As with everyone else, the future is the tough bit to predict. Flybe appears confident, while conceding that it will be reducing its Winter season expansion from 16% down to a more modest 6%.

The reduction will equate to 400,000 fewer seats than expected between Oct-08 and Mar-09, with frequency to be reduced on service to European destinations including Paris, Frankfurt and Brussels, as the airline is "beginning to see that some of the corporate accounts slowing down"

Bombardier will be watching this situation with interest, as the carrier is sitting on the company's largest firm order, for 60 78-seat Q400s, which are being delivered over the next three years as part of the carrier's refleeting strategy. The carrier also has orders for 14 118-seat Embraer-195s. The fleet's substitution plan, from E-145s to BAe 146-300s will result in a planned capacity increase of 19.4% over the 20 month period between 31-Mar-08 and 31-Oct-09.

Flybe is following a "rigorous fuel hedging policy", with 76% of its fuel needs for this calendar year covered at "attractive rates" (although no further details were disclosed). With this hedging position, Flybe has one of the most extensive hedging programmes among its European competitors.

Fuel represented 17.0% of the airline's cost base in FY07/08 and, at USD1,250 per tonne, Flybe's (turbo-prop) fuel costs currently only represent 24.6% of total operating expenses, one of the lowest among LCCs worldwide. As a result, Flybe has stated oil prices would have to be "well over USD170 a barrel before Flybe is forced to breakeven".

The carrier has also benefited from its investment in modern aircraft, with the carrier stating it would have GBP33 million in additional fuel expenses if it still operated its 2002 fleet. 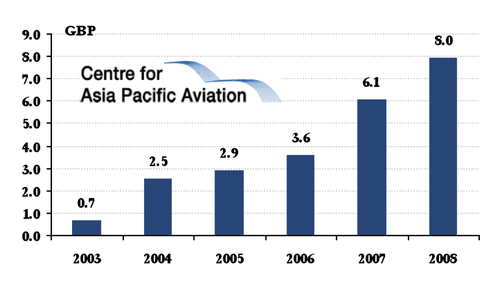 By right-sizing the aircraft for the routes it operates and providing low fares, Flybe maintains it is well placed to rob from the rich as well as the poor, by both picking up the cost sensitive business traveller and attracting discretionary travellers by providing service at a price not much higher than the lowest-fare LCCs.

The fact that anything from 20-45% of traffic is identified as business travellers, offers some comfort, but the sodden UK economy will be dragging that market down. It is here that Flybe's biggest challenge comes. Unlike its larger rivals, it is still predominantly reliant on the British market, with some 86% of its capacity flying into or from UK airports. 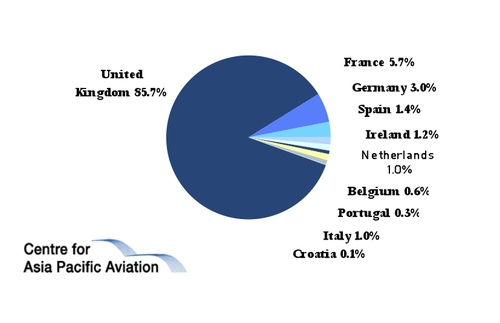 However, Flybe plans to expand internationally from key airports in the coming months, with the planned launch of service from Newcastle to destinations in Scandinavia and Germany (the airline also expects to add a fourth daily Newcastle-London Gatwick service after investing GBP2 million in acquiring landing slots for the route from Jet2.com). Flybe also plans to increase operations at Newcastle, from the current 22 daily services covering ten destinations, with the addition of additional European destinations.

Flybe reckons that one of its differentiators is "regional not radial", the carrier's self-description on its website. That could also read "stirred, not shaken". Flybe is gently stirring the market, without setting out to shake its foundations, manoeuvring between the bigger operators and paying attention to detail as only a small carrier can do (although not all do).

By picking the eyes out of many of the better strategies - low cost profile, network planning, frequency, good yield mix with product to match, loyalty strategy, cautiously tailored operating relationships - it has been able to sit on the fence without suffering the pain that often goes with that position. As a contrast of styles, the Ryanair model, whose low cost approach it broadly follows, sits at the opposite end of the spectrum.

Flybe's style is very much a reflection of its management - cautious and understated. In implementation it is more a mini-Southwest Airlines, without the embellishment of Herb Kelleher. But that style has also enabled a transition from an unexciting but successful regional airline, Jersey European Airways, into a regional low cost operation in 2002, when LCCs threatened to steamroller all sizes of market. The success of that process gives Flybe an ancestry that now stretches back almost 30 years.

The carrier's traffic growth has been strong if not stellar, with consistent attention to frequency (to suit its business following) and a design to accumulate regional networks. 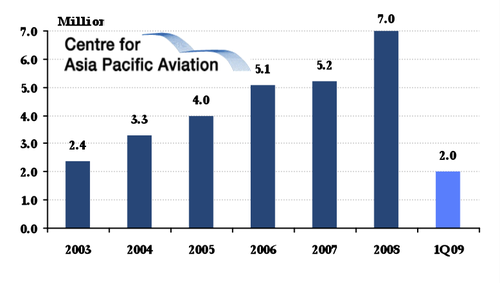 According to Flybe, the majority its passengers travel with the airline regularly and consequently its network has been designed with a focus on offering high frequency connectivity to city-centre destinations. This focus was devised after Flybe' research found a slowdown in demand for tourist travel that had been stimulated by low fares. Mr Rutter previously stated the carrier was "clear a couple of years ago that consumer appetite for visiting places they'd never heard of would wane, dented by a weakening economy and a consumer backlash to the low-grade service attitude of some of the hard-core low cost airlines".

Accordingly, over 80% of Flybe's capacity is deployed on frequencies of twice or more per day, with approximately 50% on four or more daily services. A small proportion of capacity (less than 16%) is dedicated to the discretional and very price sensitive traveller on frequencies of daily or less. According to Flybe, these routes that are the most risky, as they are more vulnerable to economic downturns.

Meanwhile, Flybe forecasts an overall 11% increase in passenger numbers during the European Summer, boosted by the additional 10% year-on-year increase in ticket sales over the Bank Holiday weekend (25-Aug-08 until 28-Aug-08). The LCC experienced particularly strong demand on services from Exeter and Southampton to Spain and France.

The airline is targeting carrying 8 million passengers in 2008, with the airline previously stating it has the "very beneficial position of picking up those [passengers] who are downshifting from the majors on a price basis - a lot from Lufthansa and Air France, and the legacy carriers. We also get a lot up-shifting from ‘hardcore' low-cost carriers because our prices aren't that far away, but we provide a better product/service balance".

The BA Connect acquisition clearly gave capacity a boost, after stagnating in the previous year. Following the acquisition, Flybe's market presence has spread considerably, including substantial growth in the North West of England and continued growth in the airline's network to/ from Scotland. In addition, the airline now has a significant network from the UK regions to the major commercial centres of Europe, serving 33 European airports in 2007/08. 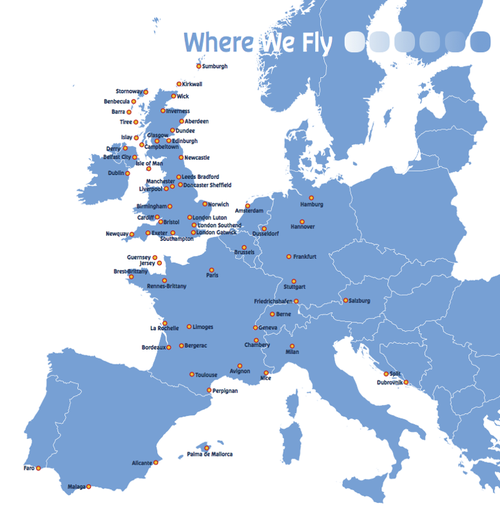 And the low-risk franchise agreement with Scotland's Loganair will further expand the de facto network of each carrier, hopefully leading to an increased overall pie and benefits for both sides. Flybe plans to operate 25 Loganair routes "under Flybe colours" for the first time from 26-Oct-08 including:

Neither carrier has been forthcoming about the term of the new arrangement, but Loganair stayed with British Airways in a similar franchise for 14 years, so its management is familiar with the concept, expecting this also "to be a long term commitment". Flybe simply receives a payment per passenger flown on the Saab 340s, while enhancing its network without major capital cost.

This is a sensible strategy in the present conditions - and Loganair probably wouldn't have gone any further at a reasonable price - but, although it helps Flybe's cash flow, it won't permanently lock in a bigger profile for a company which would be Europe's largest regional. For that is what this airline wants to become.

That - and profitability - may eventually set it up for the ultimate goal of an IPO (apparently still on track, albeit somewhat optimistically in present conditions, with financial advisers appointed) or, more likely, to become an acquisition target as a combination of EU liberalism and North Atlantic open skies exposes UK markets to more participants.

Who knows, British Airways may well be back soon to claim what it has relinquished in the past couple of years. If not BA, there will be a number of acquisitive large airlines looking to complement their long haul connections. And, by advertising its wares through its numerous interline arrangements, Flybe makes sure that it remains well on the radar.

Michael O'Leary may be in a minority in making the call that Flybe will be an early casualty of Europe's economic downturn. However, Mr Rutter has scotched the "doom and gloom rumours", stating his carrier has been preparing for these challenges for the past five years, and have comprehensive strategies in place to "ride out the current economic turbulence".

But, sitting on a slender GBP67.4 million in cash (a 102% year-on-year reduction, although this balance included GBP96.0 million of cash received from BA upon the acquisition of BA connect on 05-Mar-07), the wannabe biggest little airline will have to use all of its extensive ingenuity to repeat this year's financial performance in 2009.