Europe’s full service carriers return to growth, but may not recover lost ground

2009 passenger traffic for Europe’s full service airlines is “almost certain” to decline in excess of 4% year-on-year, according to the Association of European Airlines. The decrease comes on top of the already depressed 2008 traffic figures.

For much of 2009, traffic reports from Europe’s network carriers were relentlessly negative, but recent weekly reports from the AEA show the numbers are edging into positive territory. Passenger traffic (RPKs) spent most of December growing, for the first period of sustained increases seen by AEA’s member carriers in over 12 months. 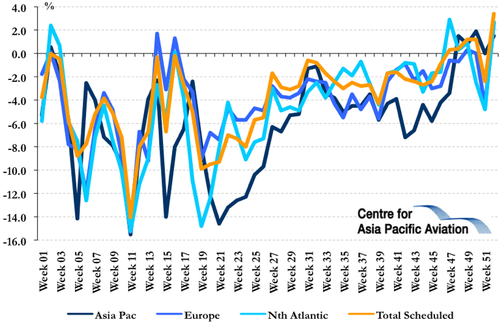 Total scheduled traffic for AEA members edged back into growth in the final week of Nov-2009. The exception to this was a brief contraction during the Christmas holiday week, when inclement weather, including heavy snowfalls and record low temperatures, affected traffic on both sides of the Atlantic.

Traffic performance in the major long-haul markets for Europe’s carriers has been mixed. Asia Pacific traffic was consistently positive, if weak, over the past five weeks. RPKs on routes to/from the Asia-Pacific were up by approximately 1% over Dec-2009, increasing to 1.5% growth in the final week of the year.

Traffic across the Atlantic has been more variable, but has dropped marginally, down approximately 0.1% over the last six weeks of 2009. Traffic in both the US and Europe is still lagging the recovery felt in many other areas of the world. The poor weather over the holiday period will not help with any recovery in early 2010, with airports across Europe and the US forced to cancel thousands of flights daily due to harsh winter conditions.

Within Europe, traffic has been heavily affected by the weather. Passenger traffic contracted 4.5% in Week 51, before recovering in the final week of the year, to rise 2.6%.

The illusion of growth: Three years wiped out

Despite the positive headline numbers, the passenger figures are only growing in the year-on-year comparison. When measuring absolute numbers, passenger traffic for Europe’s airlines over 2009 declined to levels matching or below traffic levels last seen in 2006. Essentially, three years of growth has been wiped out by the economic crisis. 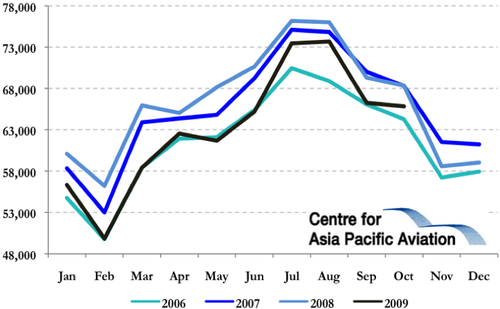 One of the saving graces for Europe’s full service airlines has been their increasing willingness to cut capacity. While carriers were slow to react to the initial onset of the passenger downturn, since 2H2009 AEA members have consistently cut capacity at rates greater than the decrease in traffic, which has helped to restore load factors. 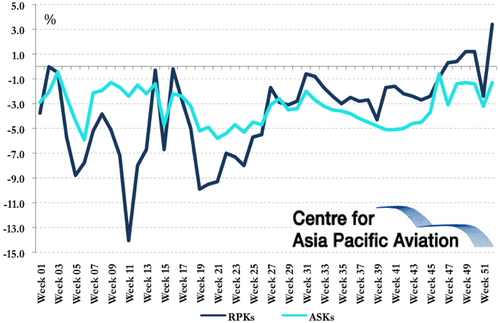 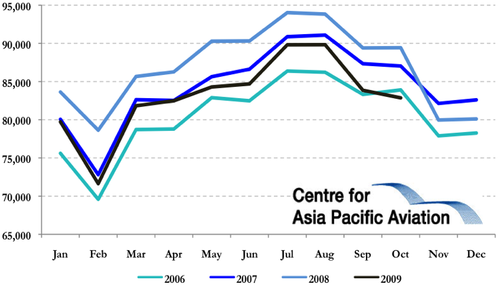 For the year to the end of Oct-2009, AEA carriers cut capacity (ASKs) by 4.4% (compared to a 5.1% reduction RPKs in the same period). That capacity reduction included a 5.5% cut in ASKs during Oct-2009, as carriers took advantage of the final month of the European airports slots waiver. 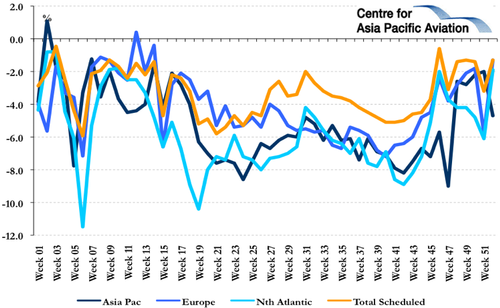 The end of the slot waiver has proved a major frustration to the AEA, which had lobbied for its extension to the Winter 2009/2010 and Summer 2010 schedules, to allow carriers to continue cut capacity "at their own pace".

Outgoing AEA Chairman and Croatia Airlines President and CEO, Ivan Misetic, stated the end of the slot waiver forced carriers to make a “stark choice - put back that excess capacity or risk our future product integrity”.

Traffic fall not the worst news

Even though the 2008/2009 economic crisis has reset AEA traffic levels to 2006, this has not been the worst outcome for airlines. Much more damaging has been a disastrous drop in fares and yields.

AEA Secretary General, Ulrich Schulte-Strathaus, commented that the traffic and capacity figures “tell less than half the story”, adding “the real damage has been inflicted by the collapse in revenues, to which falling ticket prices, particularly in the premium-travel segment, have contributed far more than depressed traffic levels”.

According to the AEA, the average ticket price per kilometre of travel is about 15% lower than in 2008, with the only relief coming from cost cutting. Airline revenues suffered accordingly, significantly outstripping the decline in passenger traffic. In comparison to the generally negative results reported by AEA carriers, LCCs took advantage of the price sensitivity of passengers due to the crisis.

Outlook: No return to “normal”

Conditions in Europe are slowly improving, but the region’s economy is still very fragile.

British Airways reported in Dec-2009 that both volumes and yields in non-premium and short-haul premium were “stable”. More encouragingly for AEA carriers, long-haul premium traffic is “showing signs of improvement with volumes above the levels of last year and yields [are] improving”, albeit of low level.

Air France-KLM Group reported a “progressive recovery in unit revenue” in its Nov-2008 traffic figures, a trend which continued in Dec-2009, thanks to a “more marked improvement in long-haul traffic”. Unit revenues are “progressively recovering” compared to the depressed end to 2008.

Since 3Q2009, the AEA has been delivering the message that the devastation rendered by the twin collapses in passenger traffic and fares will fundamentally alter the air traffic industry in Europe. In Oct-2009, the AEA Chairman warned, “we will not return to normal again”.

By Dec-2009, the AEA’s language stiffened even further, with Mr Schulte- Strathaus stating that full-service carriers’ markets had been “fundamentally damaged during the last year, and in some respects they will not recover.”