Total seat numbers in Europe are down 84.6% year-on-year in the week of 18-May-2020, according to schedules from OAG combined with CAPA Fleet Database seat configurations.

This is almost 2ppts narrower than the previous week's 86.5% drop and the smallest rate of decline since Mar-2020. Nevertheless, it is the seventh successive week of cuts broadly in the -85% to -90% range.

Europe's cuts are no longer the world's deepest. That distinction now belongs to Latin America, where seats have dropped by 88.7% year-on-year. Seats are down by 80.8% in Middle East, 80.5% in Africa, 78.7% in North America and 51.6% in Asia Pacific. The rate of fall is narrowing in the three big regions – Asia Pacific, Europe and North America – but widening in the others.

Data based on filed schedules indicate that European aviation may be at the beginning of a slow rebuilding of capacity.

However, plans by Ryanair, IAG, Lufthansa and Air France-KLM imply that capacity for Europe's leading groups will still be reduced by around 50%-80% in Jul-2020. Even those plans are based on the lifting of restrictions.

Total European seat capacity is scheduled to be 5.1 million seats in the week of 18-May-2020.

This is a 1.9% increase week-on-week, but is still 84.6% below the 33.4 million seats of the equivalent week a year ago, according to the data from OAG/CAPA.

The total is split between 1.5 million domestic seats, versus 7.8 million last year; and 3.7 million international seats, versus 25.6 million.

This is the ninth week of very heavy double digit percentage (more than 50%) declines in seats.

This week's cut is the narrowest rate of decline since seat numbers fell by 78.1% in the week of 30-Mar-2020. In absolute terms, this week's total of 5.1 million seats is also the highest since that same week, when it was 6.7 million.

However, Europe's capacity can still be characterised as bumping along the bottom.

Among world regions, Latin America now has the deepest cut

Europe's 84.6% year-on-year fall in total seat numbers this week is no longer the deepest cut among world regions. Latin America has taken over from Europe, with a cut of 88.7%.

Asia Pacific continues to have the lowest rate of decline, a reduction of 51.6%, while North America, Africa and Middle East have all been reduced by between 79% and 81%. 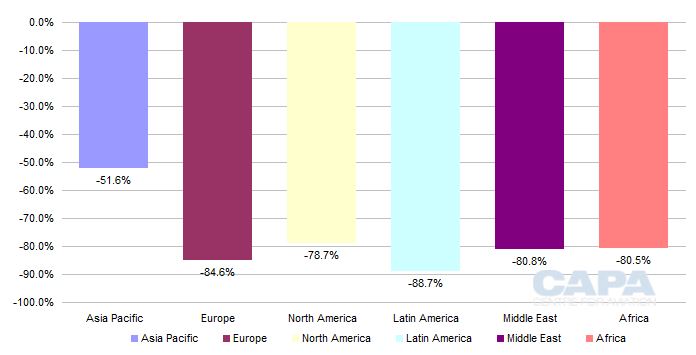 Asia Pacific, Europe and North America are on an upward trend; other regions decline

Asia Pacific seat capacity has now been on an upward trend for four successive weeks, while North America and Europe are also following an upward curve, albeit more modestly.

However, Latin America, Middle East and Africa all reached new lows in terms of the year-on-year percentage cut in seat capacity. 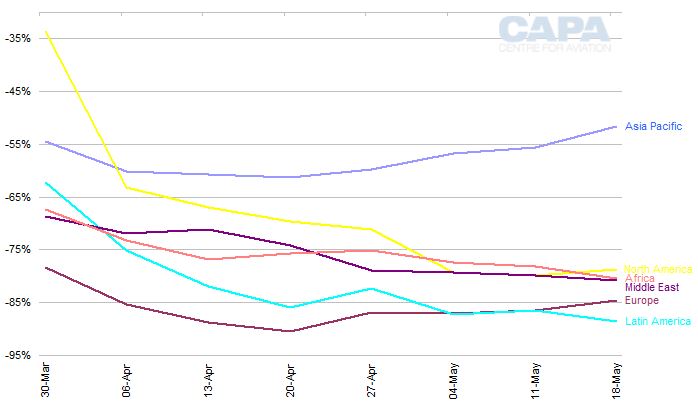 The U-shaped recovery is still widening, with Jun-2020 capacity falling…

Again, the upward arm of the U-shaped recovery depicted by schedules data continues to widen across the summer season. Capacity for Jun-2020 is now projected to be down by 34% year-on-year, compared with a 25% decline anticipated last week.

The outlook for Jun-2020 capacity implied by filed schedules data has fallen by 19% over the past two weeks.

…but Jul-2020 scheduled capacity has increased

However, projected capacity for Jul-2020 has increased by 4% compared with last week's schedules data and is now expected to be within 6% of Jul-2019 levels. 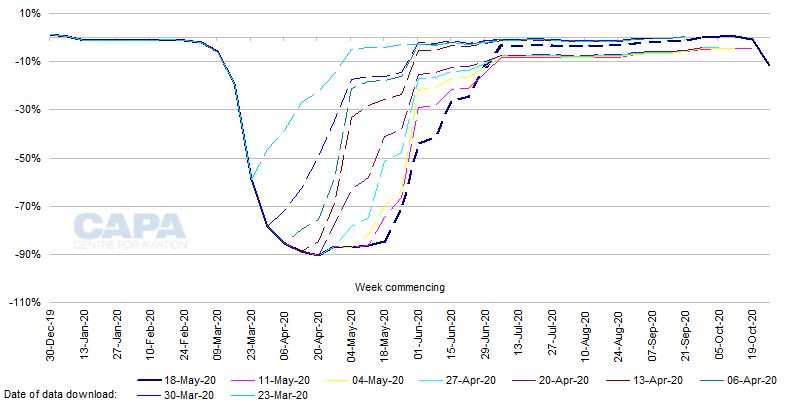 However, the operations actually flown by Europe's airlines in the summer peak months are likely to be at much lower capacity than current schedules imply.

Each of Europe's big five airline groups has schedules filed with OAG for the peak summer months that are wildly optimistic when compared with these scenarios from global aviation bodies. They are also far in excess of plans indicated by the groups themselves.

Ryanair, Europe's largest airline group by 2019 passenger numbers, said on 18-May-2020 that it expects to operate less than 1% of its originally planned flying programme in the Apr-2020 to Jun-2020 quarter.

It plans to increase its operations in the Jul-2020 to Sep-2020 quarter, but with no more than 50% of its original traffic target of 44.6 million passengers.

However, capacity for Ryanair Group derived from OAG schedules and CAPA seat data is projected to be above 2019 levels from Jun-2020 onwards.

OAG/CAPA seat capacity for Air France-KLM is back to/slightly above 2019 levels from Jul-2020 onwards.

Lufthansa Group has not yet indicated its capacity plans for the rest of this year. However, it has announced plans to operate around 1,800 weekly round trips, or 3,600 frequencies, by the end of Jun-2020.

OAG frequency data for Lufthansa Group are only 7% below last year for the last week of Jun-2020 and back to 2019 levels from Jul-2020 onwards.

Since then, the UK government's plans to introduce 14-day quarantine requirements on international arriving passengers prompted IAG CEO Willie Walsh to speculate that British Airways' capacity return plans may have to be pushed back.

OAG/CAPA seat capacity for easyJet plc jumps from zero in the week of 25-May-2020 to 7% above 2019 levels from Jun-2020 onwards. Even without guidance on capacity plans from the airline, it is clear that the schedules outlook is vastly inflated.

There will be further cuts to filed schedules

Europe's slow and tentative rebuilding of airline capacity is just starting. However, it will not follow a straight line and may suffer some reversals on the way, depending on the ending of travel restrictions and the return of customer confidence.

Moreover, it will not follow the steep incline in schedules data.

The indicated OAG/CAPA capacity reduction of approximately 6% year-on-year for Jul-2020 compares with cuts that can be inferred from announcements by Ryanair, IAG, Lufthansa and Air France-KLM of around 50% to 80% at that stage of the year.

Airlines are filing planned schedules into the summer peak in anticipation/hope of the lifting of travel restrictions and in order to provide themselves with options for possible operations.

This makes sense, but it points to further significant reductions in the level of operations implied by European airline schedules data for summer 2020.