Total seat numbers in Europe have dropped 86.5% year-on-year in the week commencing 11-May-2020, according to schedules from OAG, combined with CAPA Fleet Database seat configurations.

Europe's cuts are the deepest among world regions (just). Seat count in Latin America is down by 86.4%, fractionally better than in Europe. It has been reduced by 79.8% in Middle East and in North America, 78.1% in Africa and 55.6% in Asia Pacific.

European airline capacity continues to bump along the bottom. Moreover, the U shape in the capacity recovery anticipated by Europe's filed airline schedules is still widening.

More positively, the widening of the 'U' is starting to slow, and lockdown restrictions in much of Europe are starting a gradual and cautious process of easing. This is a positive and necessary development for European aviation demand to return.

However, the easing of restrictions is unlikely to follow a straight line. Considerable uncertainty remains ahead.

Total European seat capacity is scheduled to be 4.4 million in the week of 11-May-2020.

The total is split between 1.4 million domestic seats, versus 7.7 million last year; and 3.0 million international seats, versus 25.2 million.

This is the eighth week of very heavy double digit percentage (more than 50%) declines in seats.

Europe's 86.5% year-on-year fall in total seat numbers this week is once again the biggest cut among world regions.

Latin America briefly took over from Europe last week as the fastest shrinking region by airline seats. However, this week, Latin America seat count is down by 86.4%, which is very fractionally less than in Europe.

Asia Pacific continues to have the lowest rate of decline, a reduction of 55.6%, while North America, Africa and Middle East are all down by between 78% and 80%. 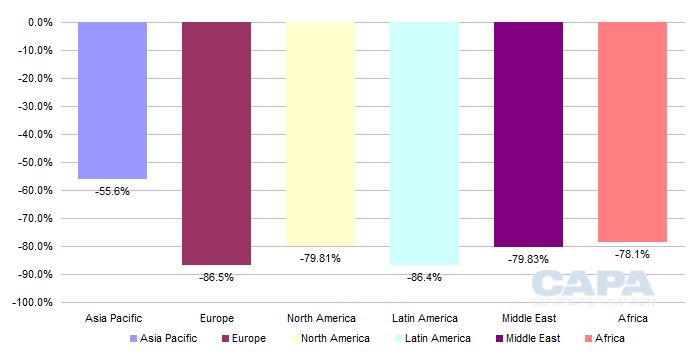 The year-on-year rate of decline in seat capacity has taken an upturn in Asia Pacific for the third successive week.

Europe and Latin America have also narrowed the rate of decline this week, but only slightly. However, Middle East, Africa and North America have all reached new lows in terms of the year-on-year percentage cut in seat capacity. 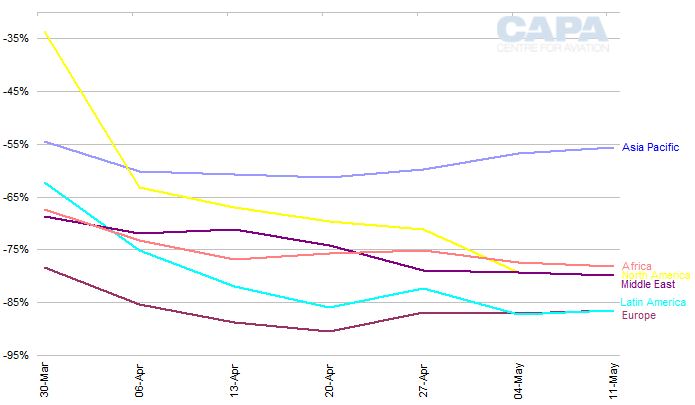 The U-shaped recovery is still widening, but perhaps more slowly

The upward arm of the U-shaped recovery anticipated by schedules data across the summer continues to widen. That said, relative to other recent weeks, the widening and flattening of the 'U' appears to be slowing – at least, in May-2020.

Nevertheless, capacity implied by schedules filed for Jun-2020 has fallen by 7% since last week.

However, capacity for Jun-2020 is still projected to be within 25% of Jun-2019 levels; that is an optimistic outlook that does not tally with even the most bullish plans indicated by any of Europe's airlines.

As a minimum step towards a recovery in demand for air travel, national lockdown restrictions will need to be lifted, or at least considerably eased.

This process has just started across parts of Europe, as illustrated by the beginning of gradual lockdown easing in Western Europe's biggest nations:

Italy, which was the first European country into lockdown, began to ease some of its restrictions on 4-May-2020, while preserving social distancing.

People may travel between municipalities, but not between regions without good reason. Parks have reopened, bars and restaurants may serve takeaways and a number of industries have resumed production.

However, the majority of shops remain closed until 18-May-2020 and hairdressers will stay shut until Jun-2020.

France, which has had one of the strictest lockdowns in Europe, started a gradual easing of restrictions on its citizens on 11-May-2020.

Trips of up to 100km from home are now allowed without people having to complete a form or justify the journey. Other relaxations of the lockdown include permitted gatherings of up to 10 people.

National and commuter rail services are building their schedules up, as are the Paris metro and bus networks, but not to full capacity. Passengers on all public transport must wear face masks.

Spain also began a limited loosening of lockdown for regions covering 51% of its population on 11-May-2020. This allows restaurants and bars to serve customers outside and non-essential shops to open without appointment, and also permits private gatherings of up to 10 people.

Worst hit areas, including Madrid and Barcelona, will need to wait a little longer. Spain is hoping to have the whole country phased out of lockdown by late Jun-2020 or mid Jul-2020.

The UK (or, at least, England – the largest constituent nation of an increasingly dis-united kingdom) has relaxed some restrictions on its citizens.

For example, there is no longer a once daily limit to leaving the home for exercise, and residents may now drive to an outdoor exercise destination.

In addition, the government is encouraging those who cannot work from home to return to work if social distancing can be practised, and preferably they should avoid public transport for getting to work.

Germany has allowed all shops to reopen and schools are gradually readmitting pupils; the country's top football league – the Bundesliga – aims to restart at the weekend of 16-May-2020.

However, official figures on 10-May-2020 indicate that Germany's COVID-19 infection rate is rising again (the R number, the reproduction number, was back above 1 after a number of weeks below this threshold).

Europe's airlines can take nothing for granted about the recovery

Germany's resurgent infection rate is a reminder for all European countries that easing lockdown restrictions is unlikely to follow a smooth path. There could be a second spike in COVID-19 cases and a further tightening of restrictions.

For aviation, this is a huge challenge.

It is only a step towards this, although it may not even be that.

For example, the UK prime minister, Boris Johnson, said on 10-May-2020 that the beginning of the lockdown easing was now the time to look to the introduction of a 14-day quarantine requirement for incoming travellers to the country.

While not specifically a restriction on air travel, this will undoubtedly act as a severe curb on demand.

IAG chief executive Willie Walsh told the Transport Select Committee of the House of Commons that a quarantine requirement was "definitely going to make it worse". He added that British Airways would need to review its plan to resume a significant flying programme in Jul-2020.

Europe's airlines can take nothing for granted when it comes to the rebuilding of flight schedules this summer.