Europe’s major airlines have made a good start to the northern summer, with strong gains in load factors across the board and almost all carriers reporting year-on-year increases in passenger numbers.

According to OAG Jun-2011 schedule data, European capacity increase 3.7% in Jun-2011. LCCs, however, increased capacity at twice the system growth rate, with available seats up 7.7%, reflecting the ongoing changes in short-haul and intra-European markets. Overcapacity has been a key issue on the minds of all carriers in 2011, as Middle East/North African crises, oil spikes and sovereign debt issues continue to affect demand for air transport. Fortunately, in Jun-2011, the first month of the European summer, the vast majority of airlines kept a lid on supply and the vast majority reported year-on-year increases in load factors. In May-2011, six of the airlines below reported load factor declines. In Jun-2011, only two did.

easyJet retained its position as Europe’s premier matcher of supply and demand. Its Jun-2011 load factor of 88.3% was a 1.1ppt increase. Ryanair was a close second with a load factor of 84%, the same result as last year.

SAS was the biggest mover in a compared with the previous month.  In May-2011, SAS reported a load factor of 80.6%, a 0.9ppt increase. The result moves the Nordic carrier into third position, up from eighth in May-2011.

At the other end, Cimber Sterling continues to report the least impressive performances of the group. The Danish LCC reported a load factor of 66.0%, a 2.0ppt year-on-year increase. Questions marks continue to hang over the future of the embattled LCC, even more so now the airline has entered into a subscription agreement with Mansvell Enterprises Ltd. Cimber entered into a non-binding term sheet with Mansvell on 16-Jun-2011 with a view to finalising an agreement for Mansvell's subscription of shares in Cimber Sterling against a cash contribution. Mansvell's subscription will result in gross proceeds to Cimber Sterling of DKK165 million (USD31 million). Cimber claims should "ensure a long-term strengthening of the capital base and strategic market position of Cimber Sterling." Mansvell also recently acquired Swedish regional airlines Skyways and City Airline. Cimber stated that in addition to Cyprus-based Mansvell Enterprises is 75% Ukrainian billionaire Igor Kolomoisky. The injection gives Mansvell a 70% stake in the carrier. Mansvell strengthening its capital base, Mansvell intends to create a leading Nordic regional airline. It is unclear whether the new airline would use the Cimber brand.

Elsewhere, Finnair and Vueling both reported increases in loads but remained at the bottom of the table with load factors of 74.3% and 73.8%. 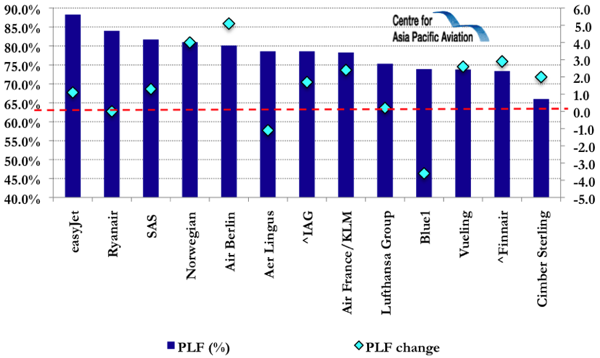 Source: Centre for Asia Pacific Aviation & company reports
^Finnair and IAG intra-Europe traffic only for Europe not including domestic

If one trend emerges from the graph below, it is that the LCCs continue to enjoy stronger growth than their full-service counterparts in intra-European markets. Despite the market for LCCs maturing and it becoming increasingly difficult to find pockets of growth, they continue to put up numbers that, for the most part, eclipse the full-service rivals’. Where it is proving difficult to grow new markets, some LCCs are moving more aggressively into the markets previously controlled by the full-services carriers and eroding their market share.

Vueling reported the strongest growth in Jun-2011, increasing passenger numbers 21.6% to 1.2 million. The Spanish-based LCC traffic figures continue to be bolstered by it’s taking over of short-haul routes to and from Madrid and Barcelona from its parent, Iberia. IAG, the holding company of Iberia and British Airways, also reported a strong year-on-year gain in short-haul passenger traffic. This, however, is likely due to growth from British Airways rather than Iberia. IAG CEO Willie Walsh has said that Spain is a “saturated market” and warned that Iberia’s domestic network will continue to shrink.

Norwegian also grew strongly, reporting a 19.1% year-on-year increase in passengers to 1.5 million, its highest ever monthly total. The Oslo-based LCC has long been one of Europe’s fastest growing airlines and continues to expand across Northern Europe. The LCC stated its new Helsinki base is “performing well” and it stated recently advance bookings for the third quarter, its strongest, have been “satisfactory”.

Aer Lingus and Cimber Sterling were the only carrier to report year-on-year falls in passenger numbers. Aer Lingus was hit in the month with another wave of industrial action, this time from pilots, who were concerned about pay and conditions changes that will be made under the carrier’s ongoing cost reduction programme. The ongoing, short-term uncertainty surrounding its operations was reflected in its result. 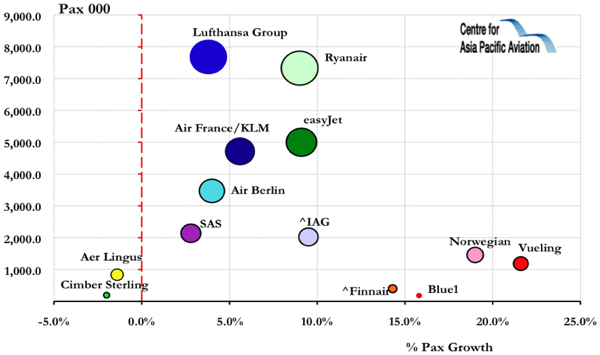 Source: Centre for Asia Pacific Aviation & company reports
^ Finnair and IAG intra-Europe traffic only for Europe not including domestic